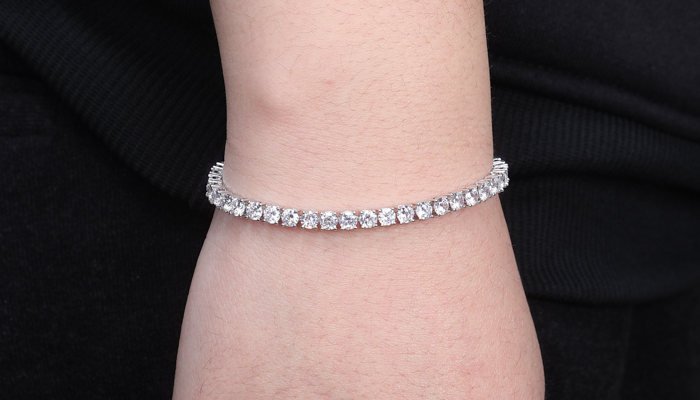 Any curious mind would wonder, and though some names have been around for far too long for us to ever question them, a quick dive into history will reveal some rather interesting bits of information. 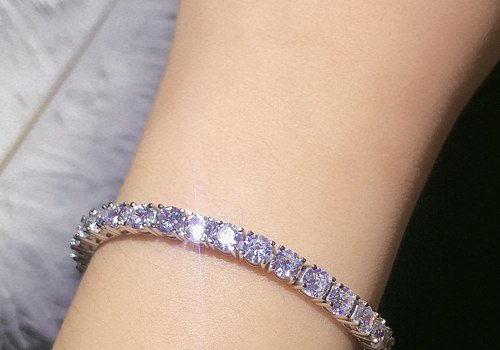 The true history of tennis bracelets

I know you’ve all read and heard about the Chris Evert tennis match story of 1987 and how her diamond bracelet snapped and flew off from her arm in the middle of a match, stopping the game to find the bracelet, and from that moment on, the diamond line bracelet was referred to as a tennis bracelet.

According to one journalist, the bracelet flew off during one exceptionally long rally.

But how true is this story?

First, it’s important to note that a lot of history is reliant on oral history, which means that the claims made about the tennis bracelet coming into existence and the long tennis open match might not 100% true. The first quibble anyone would have about this story is that in as much as the story puts the popularity of the diamond line bracelet to about 1987 and after, the truth is that this diamond line bracelet had been around for a lot longer, specifically from the 1920s.

However, with diamond jewelry more of a preserve for the wealthy, the extravagance around the bracelet and its subsequent popularity had to do with the fact that the bracelet was part of her ensemble from the 1970s as she ascended through the ranks, sporting the best chic jewelry and sporting gear.

Unfortunately, this is not the actual truth behind the origin of the tennis bracelet, and the fact below dismisses it immediately.

In an article titled Toward a Backhand, published in 1987 on July 17th by The New York Times, the popularity of the tennis bracelet actually precedes the 1987 Grand Slam of September 1st – 14th.  In the article, it is clear that the tennis bracelet was around for a long, and Chris Evert isn’t the only one who wore the bracelet while playing.

And in another article published by the Los Angeles Times in 1987 (August 4th), the diamond studs that were worn by Pat Cash, an Australian men’s champion. The article noted aptly how we shouldn’t forget the impact of Chris Evert’s events on the diamond bracelet (tennis). What this means is that although the name got its place in the 1987 US Open, the naming of the bracelet, a tennis bracelet, didn’t happen only at the Grand Slam. 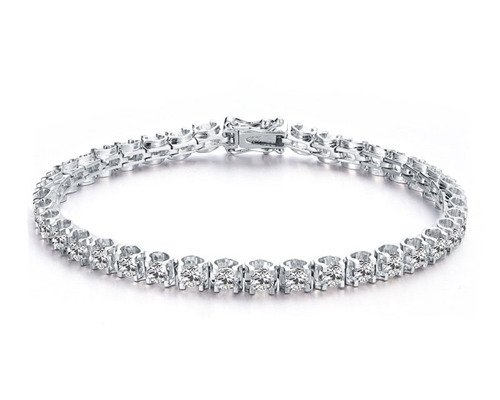 However, what stands out and appears historically correct is the dating of the jewelry in the 1970s. The 70s was the disco era, a time when people began dressing down, wearing a lot of denim with diamonds. At the time, there was this deep desire for low-key luxury pieces, and to meet the demand, the high-end jewelers started making the jewelry in demand.

One of these jewelers was Elsa Peretti, who launched her Diamonds by the Yard, the toss-it-in-and-wear with everything diamonds at Tiffany. This was followed by Cartier’s Aldo Cipullo wh came up with the Love and Juste un Coud bracelets, also during the same period. Cartier noted that they were making a transition into making something completely different, something that no one else was doing. With this in mind, Evert wearing the diamond bracelet while playing tennis and the naming of the bracelet, a tennis bracelet fits in well with the overall mood and fashion sense around the bracelet.

What about the story of Chris Evert losing her broken bracelet on the court? Well, in an effort to confirm what happened, Chris Evert’s publicist confirmed in an email that Chris was actually wearing a diamond bracelet on the day of the match and that the gold bracelet broke off and fell onto the court during the early round of the US Open, and yes, the game had to be stopped as she searched for it. However, this happened in 1978 and not 1987, as we’ve all been made to believe. Perhaps we could think of this as the internet going a little wild.

Why is it called a tennis bracelet? 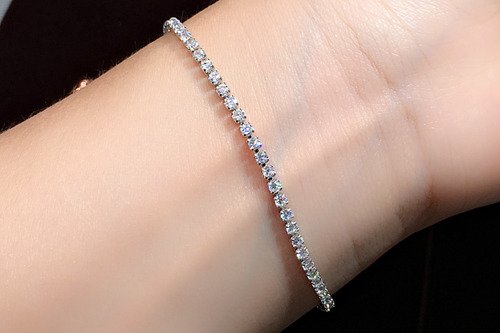 While the diamond line bracelets were around and quite popular in the 1970s, they became more popular in 1978 during the US Open (Grand Slam) when the tennis star Chris Evert was playing.

During this hotly contested match, Chris stopped suddenly to retrieve her diamond bracelet, whose gold clasp had broken, sending the bracelet flying across the field.

She asked that the match be stopped as she looked for it before playing her next point. Later after the match, when she was interviewed, she explained what happened and referred to the bracelet, specifically as a tennis bracelet, which is where the iconic ‘tennis bracelet’ name was born.

That said, it should be noted that some critics argue that the diamond bracelet only got its name from the fact that wearing diamonds when playing tennis matches was unheard of, and when Chris Evert started wearing her diamond bracelet during matches, the name ‘tennis bracelet’ was born.

And as a result of her popularity in the world of tennis, the name stuck.

But even with different theories around the origins of the name ‘tennis bracelet,’ it goes without saying that Evert losing her bracelet during a match and her asking the officials to stop the match momentarily as she looked for the bracelet was the primary reason why the diamond bracelet was referred to as a ‘tennis bracelet’ and why we all call it a tennis bracelet.

Why tennis players and some people love tennis bracelets?

With the exploding demand for the tennis bracelets following the US Open mishap, jewelry designers worked on the workmanship of the bracelet, making it sturdier and less prone to breaking.

One of the notable changes made to its design includes the addition of safety catches on the bracelet’s side in addition to the clasp for an extra layer of protection. 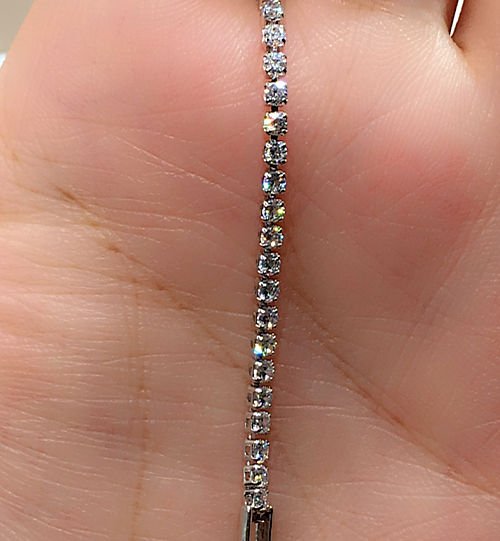 Below are the main reasons why we love tennis bracelets

For starters, tennis players like wearing tennis bracelets because tennis is the only sport in which the players are allowed to show off both their prowess and sense of style.

And with sponsors like Nike, Adidas, and Puma endorsing and outfitting the competitors, it goes without saying that the tennis matches are fashion showdowns and also the test of the players’ agility and strength.

The gold tennis bracelet made with a set of diamonds is quite versatile, stylish, and it’s appropriate to be worn at all times.

The bracelet matches all women’s wardrobes, and it can be worn daily.

The bracelet can be worn by itself as the perfect accessory for a formal or casual fit. You can also pair the bracelet with any outfit you may have.

The tennis bracelet is also popular because it comes in a variety of options and designs.

The carat sizes vary too, and you will find a wide range of options from 1ct diamonds to diamonds as big as 15ct.

While the 7-inch bracelet is the most common bracelet size worn by most women, there also are 6-inch, 6.5inch, 7.5inch, 8inch, and 9-inch bracelets.

The bracelet designs and lengths are flexible, and you get to buy bracelets in different sizes depending on the length of the bracelet. 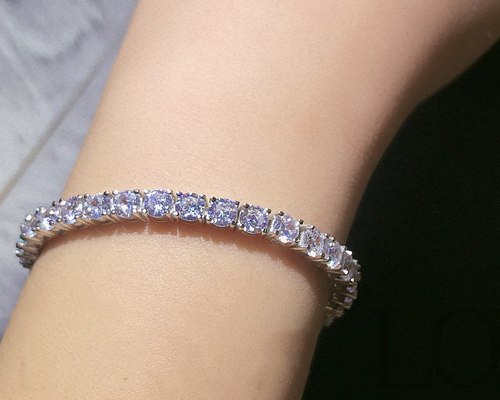 Lastly, tennis bracelets are popular because they are trendy, and the fact that most people have developed an emotional connection to their past.

The tennis bracelets first became popular in the 70s, 80s, and 90s.

It was a status symbol, and for most people, such a big deal. As a result of the popularity of the bracelet, most people wear them to reminisce about the old days.

The tennis bracelet is stylish, versatile, trendy, and beautiful.

It may have gotten its name from a tennis match, but the truth is that the tennis bracelet is a fashion masterpiece.

So, if you are looking for something versatile, simple, but elegant, then the tennis bracelet might be the best option for you. Guys, for more tips, please visit here or here.