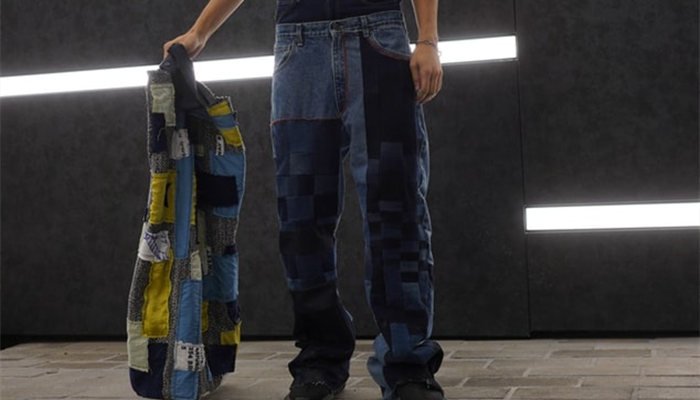 Hip Hop fashion, originating from the streets of New York projects, has since evolved into high fashion. Like hip-hop music, this kind of fashion has a distinct style and aesthetic. It’s mostly characterized by baggy clothing and chunky chains; you’ll see most rappers adorned in.

Today many people have adopted this style of clothing. While today it’s a popular choice of dressing, have you ever wondered the meaning behind baggy clothes and why rappers wear them? In this post, we try to answer this question by discussing what baggy clothes mean as well as the various reasons rappers wear them.

What Does Wearing Baggy Clothes Mean?

An outfit isn’t just about getting dressed. What we wear is an expression of who we are and what our personality is. Certain ways of dressing have different meanings, mostly based on various cultures and personal beliefs. It can be in the design of the clothing, the color, the imagery, or writing on it.

Baggy clothes also have a meaning behind them. In Hip Hop, the idea of baggy clothes is said to have originated from Black gang members in California known as Crips and Bloods after doing time in jail. It resembled the baggy t-shirts they had to wear in prison, the falling pants as well as loose shoes because their belts were taken away.

Over time, it became an act of rebellion against mainstream media and its idea of a perfect body. The baggy clothes were meant to shift focus away from the body.

Today, people wear baggy clothes for different reasons. There those who do it to hide their bodies. Others do it to emulate certain artists or rappers they feel they identify with. For most people, however, baggy clothes are worn for the comfort they provide and also because they were trendy at some point in fashion.

Why Do Rappers Wear Baggy Clothes?

Given their origin, baggy clothes are an important component of hip-hop culture. Rappers were mostly seen adorned in different baggy clothes and chunky chains, especially in the past. They are said to have been the main reason behind the trending of baggy clothes, to begin with, since fans wanted to emulate them. But, is there a reason why rappers dress the way they do. Here are a few possible reasons we think they do:

The whole concept of baggy clothes was said to have originated from people who had done time in prison. There they were forced to wear baggy t-shirts, loose pants, and loose shoes.

When they came out of prison, they continued wearing oversized clothes as a sign that they did time in prison. So, rappers who had done time or wanted others to believe they had, would dress in baggy clothes.

2.As an act of rebellion against mainstream culture.

The whole idea of Hip hop is an act of rebellion against mainstream media and culture that forces people to conform to a particular way of thinking.

Examples were the mainstream ideas of ideal bodies and appearances. So, rappers wore baggy clothes to shift the focus away from the body to their music.

3.It reflected what their music was about.

In Hip Hop baggy clothes were considered synonymous with music. Given the prison meaning behind it, the oversized clothing reflected what most rappers spoke about in their music.

That is social injustice, prison time, community, and hardships among others.

4.To emulate their mentors in Hip Hop.

Another possible reason why rappers today could still be wearing oversized clothes could be because of the mentors in rap.

We all have certain people or figures we look up to. Similarly, rappers today may have rappers they identified with and looked up to from back in the day.

So, dressing in oversized clothes could be a way to emulate them.

Given how rappers popularized baggy clothes, they were a big hit, especially between the 1990s and 2000s. During that time, most people wore wide-legged jeans, baggy t-shirts, sweaters, and overall. This trend disappeared when skinny jeans were introduced. But that doesn’t mean that the whole concept of baggy clothes was completely forgotten.

Baggy clothing never really goes out of style. Most people find ways to incorporate it into whatever new trend there is.

Oversized t-shirts for example have always been in trend, even with skinny jeans, they are considered a great pairing. In South Korea, baggy clothes are said to still be very popular on a mainstream level.

Will Baggy Clothes Ever Come Back in Fashion?

The wonderful thing about fashion is that it never really changes. Most of what is trending today is a recycled version of what used to trend in the past.

So, the probability of baggy clothes become a trend again is very high. In fact, who’s to say that baggy clothes aren’t still in trend.

Men still have the baggy options of clothing, even with the popular skinny jeans and fitting shirts and t-shirts that came to trend. There are several reasons why baggy clothes can never completely go out of style:

While there is that slimming factor with skinny jeans and other fitted clothing, baggy clothes offer something they don’t, that is comfort.

Today, people aren’t just looking at following trends and looking good at any cost. Most people are looking for practicality and what feels comfortable. Baggy clothes offer exactly that.

2.Hardware overalls are becoming a trend.

What’s meant to be protective wear for people in this trade, is slowly turning into a popular fashion piece.

People love the oversized overall for their practicality and comfort. It is also versatile in terms of the different colors and prints they could come in.

3.Baggy clothes are now on the runway.

Most designers are now steering away from the out-of-the-box designs to more practical outfits that people can wear daily.

Comfort is key and that why a majority of the pieces being showcased on runways are baggy outfits.

Baggy T-shirts are always a classic.

No matter what changes, oversized tees have always remained in style. Their versatility when it comes to outfits and accessorizing is what has kept them in the game for a long time. Not to mention the overall comfort and laid-back feeling you get from them.

While there was a meaning behind baggy clothes and why rappers wore them, it’s safe to say that most people wear oversized clothes for comfort.

That’s not to say that there aren’t those who do it to make a statement.

The bottom of it is that we each have our meaning or reason why we wear oversized clothes. Read more tips here or here!