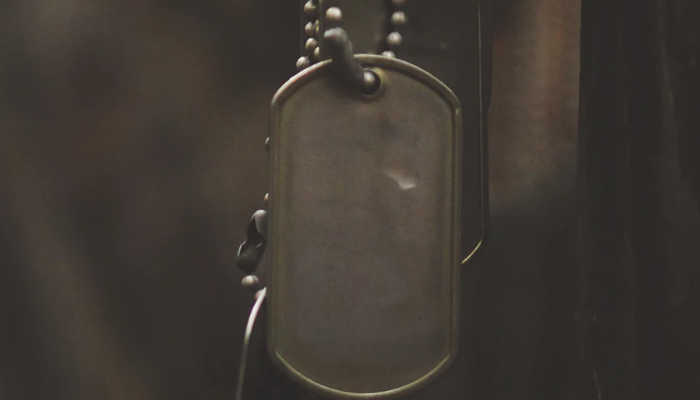 The primary purpose of military dog tags is for easy identification of soldiers in the field in the unfortunate event they perish or suffer serious injuries. Standard dog tags come in pairs, and this is necessary for the efficient identification process of soldiers.

The primary purpose of military dog tags is for easy identification of soldiers in the field in the unfortunate event they perish or suffer serious injuries. Standard dog tags come in pairs, and this is necessary for the efficient identification process of soldiers.

The use of military dog tags dates back to the Spartan army of the Roman Empire. Back then, they tied strings with their names to their left-hand wrist for identification by their comrades. During the beginning of the American civil war, some soldiers used paper notes where they wrote their personal information to help identify their bodies in a foreign land, while others wrote their names on their belt buckle. The issue of two tags came into play later in civil wars.

The name ‘dog tag’ comes from the resemblance of the tags tied on dogs for easy identification and return to their owners. The two military dog tags are worn around the neck with a long chain by all active army officers.

Usually, the tags consist of high-quality and durable stainless steel material that often had chromium and nickel properties. In some cases, the pair of tags comes with rubber linings that act as silencers to prevent their clanking noise from alerting the enemy camp of their presence.

Why do dog tags come in pairs?

Dog tags came in pairs for purposes of record-keeping and maintenance. In the unfortunate event that a soldier dies or gets hurt severely, his troop mates are to take one tag back to their military base for accountability purposes, while the second tag is left with the wounded or dead soldier.

Earlier, the second tag was placed in the soldier’s shoe while the other was worn around the neck. Upon a soldier’s demise, one of the two tags is usually taken to the fallen soldier’s next of kin by an assigned scout to notify them of their family’s or friend’s passing.

What is the second tag for?

Throughout history, the purpose of military dog tags has remained unchanged. The introduction of the second dog tag was for ease of the identification process as certain difficulties could be faced in the field.

If a soldier’s used one dog tag, the fallen soldier would be successfully identified in the field, but the military base had no way of knowing of his/her death and determining the identity of the soldier. As such, the base would lack the proper means to identify fallen soldiers in active service, as well as family members of the deceased, would not be alerted of the loss appropriately.

There are different designs for dog tags within the army to help acknowledge the various departments within the military. The standard design of the military dog tag is an oval cut dog tag made from stainless steel that is exceptionally resistant to tarnishing.

Military issued dog tags have soldiers’ essential details written in four or five lines. Some of the details include; the official name of the soldier, their army serial number, their field of service, their medical information such as their blood type and allergies, their department of defense ID number, and their religion if any.

In exceptional cases, you may notice a soldier wearing a red dog tag attached to the regular military dog tag. Often, the red dog tags were issued by the military’s medical department to show an unusual medical condition of a particular soldier.

Do all soldiers wear dog tags?

All active military men should wear military issued dog tags at all times. Activation of the dog tags may be during a training exercise, when in planes traveling to active war zones, whenever outside the country on official army business and when deployment in the field. Wearing of dog tags by military soldiers is a compulsory army requirement for active soldiers. The military is very strict with whom it issues dog tags, as its regulations restrict them from issuing dog tags to veterans.

Does National Guard get dog tag?

A national guard is in every state within the USA and other areas, such as Guam. They are under the governor of the country unless deployed by the military overseas. When deployed overseas, they are issued with military-grade dog tags as they are active serving members of the military. They can serve in various fields, such as air force or the marines.

Dog tags have convenient importance as soldiers may choose to wear the dog tag as they please when not in active duty. Similarly, some civilians wear dog tags as a fashion accessory. However, this practice does not sit well with a good number of members of the general public. It is seen as offensive conduct, especially to retired military soldiers.

Civilians who have no past connections with the army may also wear dog tags but not those issued from the military. Their dog tags come from third parties and customized as preferred.

They do not have the same information as those issued by the army as they may contain quotes, sayings, or even pictures. Often, these custom-made dog tags are gifts with the sentimental value given to loved ones for various special occasions.

Two dog tags ease the identification process and allow easy accountability. The dog tags are worn at all times by all military personnel while in active duty. The shape and information on the tags may differ, but the purpose remains the same. Civilians may wear dog tags, but they are not the same as those issued in the military. They all wear dog tags As I mentioned in the picture above.

Thanks for reading guys, if you are love to know more, please read our fashion jewelry section, you will know more topics. and if you want to know more, do not forget to visit our recent posts here.