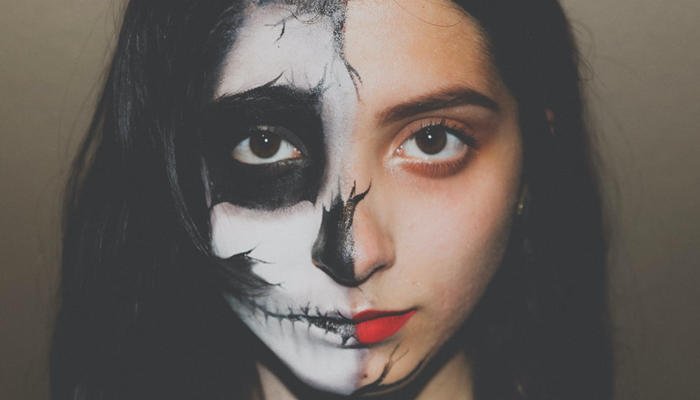 Why Are Skulls So Popular In Fashion? Is it bad to wear skulls? What does skull jewelry mean?  If you want to know these answers, you are in the right place.

Fashion is fun, intriguing, and other times confusing. Today, we look at skulls and explore the reasons for their popularity.

So, keep reading to learn all there is to know about skulls and their popularity in the fashion scene.

Why are skulls so popular in fashion?

You might not believe this, but skulls have been used as good luck charms in several cultures. Skulls have been believed to have the power to ward off illnesses while guarding the individuals wearing them against different forms of evil spirits.

In the Elizabethan era, for example, the skull rings fashioned out of the jaw bone was made to disappear right under the finger, creating an illusion of the finger piercing the mount. Ever since these times, the skull rings have grown in popularity in most cultures and across ages that embrace the enchanting style and design of the skull rings.

Interestingly enough, the skull sign is one of the most common signs used in the fashion industry. It is the standing trend icon in existence that can be worn in different ways, hence common characteristics with tattoos, accessories, piercings, clothes, jewelry, etc.

Overall, the popularity of skulls in the fashion industry has to do with the skull’s universal appeal, as well as its versatility, in terms of styling and the meaning it carries. With these in mind, it goes without saying that the skull jewelry won’t be going out of fashion any time soon, as these accessories remain an iconic fashion item to have ever existed. 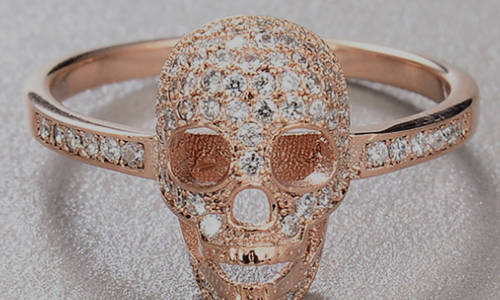 But as expected, the skull doesn’t represent the same thing. There is a lot about skulls, and though the pop fashion scene seems to be all for it, some eras, beliefs, and cultures aren’t particularly excited about skulls in fashion.

Even with all the associations, we are forced to make and think about the skulls in fashion; we have to agree that there is something about a skull that is rather unnerving. Think about the construction and the overall geometry of a skull and the link created between the skull and this area of our brain, and the subsequent image created by your mind – regardless of your level of civility and liberalism, every time you see a skull, you recognize the face, albeit unconsciously. Naturally, our minds are programmed to recognize the face every time we see a skull, and this natural predisposition means that the brain is unable to detach the image of the skull with the human face. This level of familiarity is largely intriguing, but then there is the inevitable connotation of skulls with death and the afterlife, and these repel us.

And these connotations only scratch the surface. There is a lot more that ties/correlate to skulls, which is why some people (beliefs/ religions) believe that the skulls are bad, while others have no issues with it. Below, we’ll look at these beliefs and the reasons behind their beliefs, but before we do, let’s take a look at some history. Here our team write a topic, 5 Little-Known Spiritual Meaning of Skulls In Real Life.

Is it bad to wear skulls?

As mentioned above, there are negative and positive beliefs about skulls. But even the church isn’t that averse to skulls, with crucifixes and other skull jewelry pieces featuring skulls on a tombstone, with crossbones and in cemeteries.

Some appear jarring. However, the use of skulls in tombstones and crucifixes by the church has to do with the fact that the skulls (tombstone art) are meant to remind the living of their mortality and the fact that they need to live good lives while planning for death. 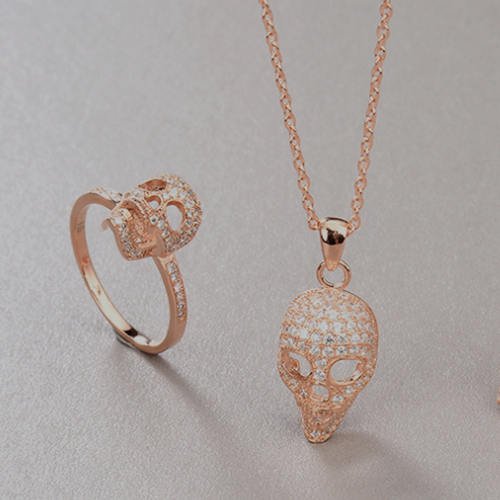 The crucifix, for example, is believed to represent triumph, hope, and merciful hope.

But to answer your question, we’d say that whether wearing a skull is believed to be a good or a bad thing depends on the message the symbol is intended to relay.

For instance, the and skull jewelry by some motorcyclists is meant to intimidate and frighten. So, look at the overall message intended before you classify skull jewelry as bad or good.

It’s also worth noting that in spite of the significance of the skull (covered above), the overuse of the skull in fashion is making the skull just another symbol that creates great jewelry.

What does skull jewelry mean? History and Beliefs about Skulls

For a large part, skulls are associated with death and mortality, which is the primary reason for their popularity in horror movies and Halloween.

And since most of us have an inherent fear of death and the unknown, it makes sense that some people find skulls (in jewelry/ fashion) offensive. The reason for that is that the skulls give this reminder of the thing we are most scared of, and you can’t blame them.

What you might not know is that behind the glorification of skulls by the fashion business, the skull/ its usage originates/ dates back to the beginning of the human race/ our first species.

Specifically, history tells us that some of the ancient tribes had kills where if on an individual was killed or after they passed on from this life, the living would craft bones as a way to carry their loved ones, but they would keep the skulls.

People also used to wear human bones, with bigger bones worn representing a higher level of respect accorded to that person. Bigger bones also mean that the tribesman being celebrated was more skillful. In these cases, individuals would wear the bones through the holes on their skins, and the bone would pierce their skin. In other cases, they would string together bones then wear them as attachments.

As you can tell, there is a lot that goes on around bones and skulls, and it makes sense that some people are averse to it.

Beyond respect and ‘celebration’ of life, the skull bears a lot of significance in the world today. 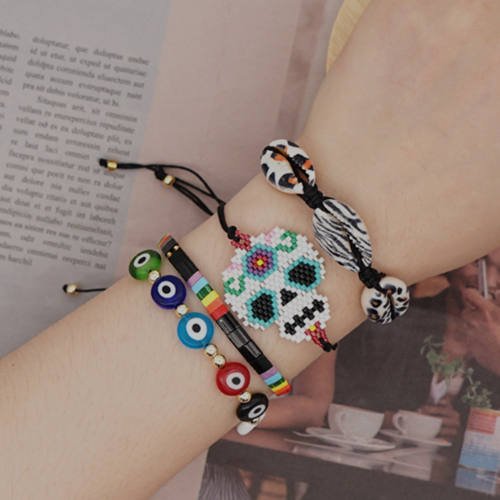 The use of the skull symbol as a representation of the level of toughness and bravery dates to the Elizabethan Period throughout Europe. This period saw the rise of Death Head Skill rings or skull rings that didn’t have the jaws.

These rings were worn to show acceptance into the societal underworld. This was inspired by the symbolism around skulls from the previous centuries. This use of skulls is the reason for the popularity of skull symbols by motorcyclist gangs and religious groups that wear the skull jewelry as a sign of their membership.

On the flip side, it should be noted that despite the association of these skull rings with danger, the jewelry was, in fact, worn to represent bravery and toughness, with the wearers getting to wear the rings as a testament of their courage amid adversity.

Finger skull rings made with the jaw disappearing to create an illusion of the finger piercing the wearer’s mouth is a common finger skull ring style today. It has been adopted by numerous cultures and ages, and their popularity keeps growing.

You are probably familiar with Jolly Roger’s flag used by pirates.

The primary reason for the use of a skull as the main emblem on the flag has to do with the fact that the skull would strike fear in the hearts of others.

The Jolly Roger flag represented a threat posed, hence its use by some tribes as an indicator of the outskirts of land to ward off trespassers. In other cases, the skull, along with bones, has been used as an alert system, notifying others of their existence/ presence.

But the skull doesn’t always carry a negative connotation. Some societies, for instance, believed that the skull symbolized a guarantee of the soul’s immortality and a guarantee of an afterlife. And for the Crystal skulls, which maintained the face, these skulls symbolized life rather than death.

Others believe that the skull symbolizes the afterlife and spirituality. And when you take things a notch higher, the skull has winged added to it as a symbol of the freedom and the experiences that await in the afterlife.

If you are religious or a Christian, you will be surprised to note the skull relates to religion and Christianity – the saints’ pictures with the crucifix and the skull are designed as a reminder to sinners, a reminder of the afterlife, albeit the choices they’ve made.

Dia de Los Muertos/ Day of the Death. Mexico and Mexicans celebrate this day every year (1-2 November). But why would they choose to dedicate a day to death while the rest of us are scared of death?

Well, the reason behind their celebration is that this is the day that they not only remember, but also pray for the souls of their death, as a way of helping these souls proceed to the afterlife peacefully.

The skull sign plays a crucial role in this celebration. Interestingly, the skull is adorned with brightly colored flowers, and they are all in bright colors, as the deceased favorite food/ beverages are prepared to represent the deceased.

In these celebrations, sugar skulls are crafted and offered up in altars.

Besides Mexican culture, ancient groups like the Aztecs and Egyptians viewed the skull as something that symbolized the cycle of death/ and rebirth.

Finally, several cultures regard skulls as a sign of good luck. They are believed to guard against all evil spirits and also ward off diseases. 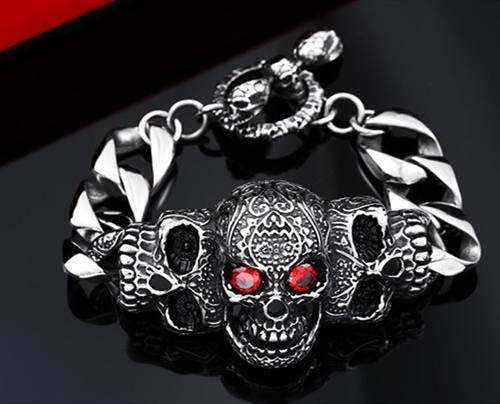 What finger to wear a skull ring?

We’ll start by noting that there really isn’t one way of wearing skull rings. But whether you wear the skull inwards or outwards will depend on why you are wearing the ring in the first place.

For instance, it would be a good idea to wear the ring with the skull facing inwards if the ring is a sign of self-expression and an accessory meant to define your style and as an element of your overall outfit.

Essentially, the skull is a fashion symbol, but also proof of your braveness, toughness, dashing looks.

On the other hand, if you are wearing the ring for sentimental reasons, say from a friend or member of an important group, or as an honor for a deceased comrade, you could wear it outwards.

Regarding the finger you wear it on, it’s a matter of preference. But if you are a member of a group and they have a specific code, you might want to respect their overall skull ring wearing code.

The reasons behind the popularity of skull rings are numerous, and the significance of the skulls quite flexible, with a universal appeal. As a result, skulls will never go out of style – skulls were an iconic emblem before the existence of fashion, hence their popularity.

There’s also the fact that skull jewelry can be worn in numerous ways, and they are visually attractive.

Hey guys, for more fashion jewelry topics, read here for more or visit this page for our latest posts.