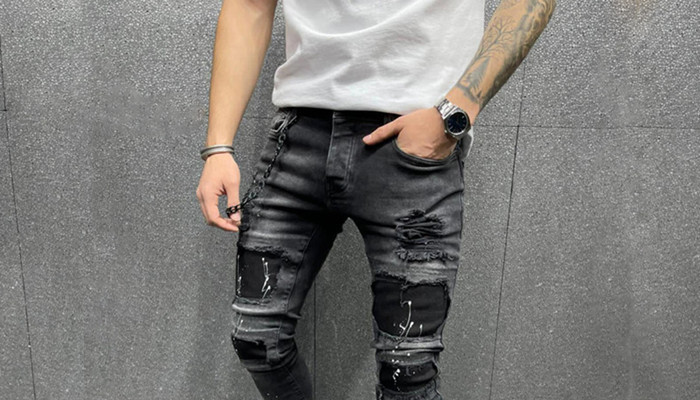 Most of the trendy and expensive outfits released in the fashion industry are a reflection of ancient fashion designs but with some little iteration that makes them contemporary. Skinny jeans also have an inclination to the ancient days but gained popularity in the 2000s. And after their introduction, the slim fits started out as a male-only outfit but that was back in 2008.

The fashion trickled into 2010 and eventually made its entrance into mainstream fashion in 2011. Since then they have remained popular and now we also have skinny jeans designs suitable for both men and women. Now given that skinny jeans were worn by our forefathers, who then introduced them and why did they become so popular. Keep reading as we respond to your concerns. 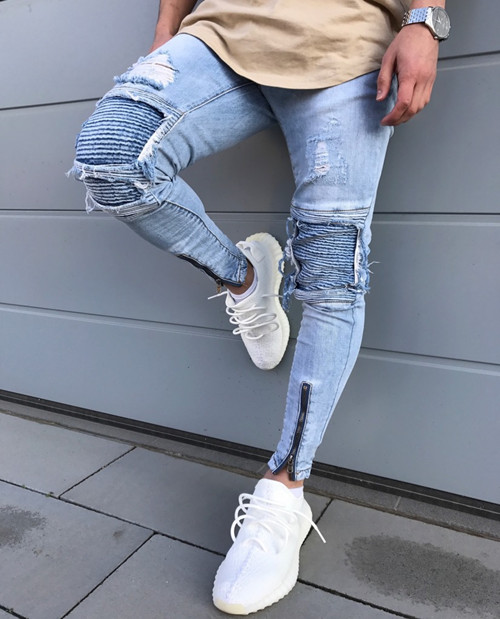 The skinny success cannot fully be credited to the two teenagers who revived the skinny jeans beginning 2000s because back in 1982 during the release of Magnus opus, the cover of the boy’s group featured a photo of the South Bronx group clad in slender cut jeans and shiny leather pants.

The group never wore baggy jeans like other male groups rather they stuck on skinny jeans made from leather, suede, or denim.

From then on skinny jeans gained momentum and two hip hop groups, Public Enemy’s Chuck D and the Beastie Boys adopted the slim-cut jeans, and to make it resonate with their hip hop culture, they paired them with high tops.

In 2007 two teenagers Chuck Inglish and Sir Michael Rocks who were part of a rap group known as “Cool Kids” debuted the skinny jeans. The underground duo are believed to have inspired the current hip hop groups such as the young thugs who introduced the retro vintage, like the colored skinnies and the American Apparel-type stripe tees among other designs. 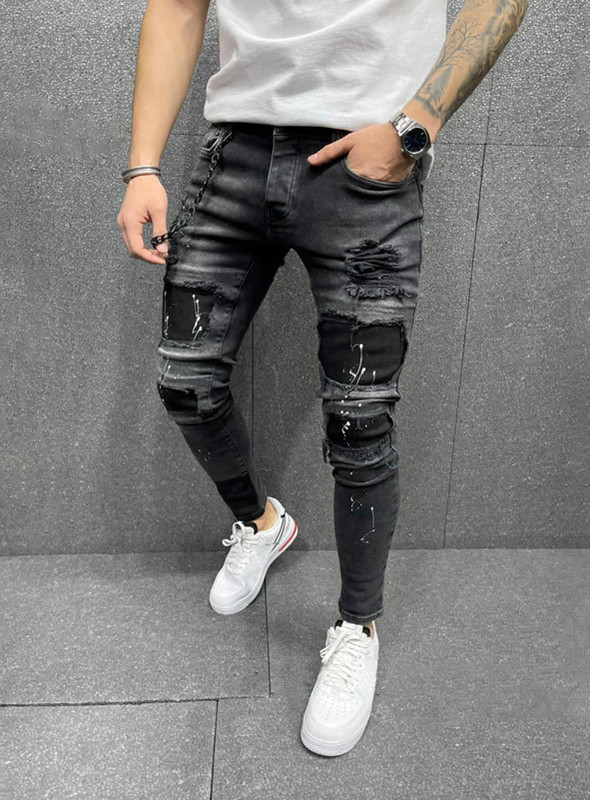 Enter 2008 and the skinny jeans gets another boost from the hip hop industry as Pharrell adopts the slim fit jeans, the rapper switched from his signature baggy BBC and BAPE jeans. His outfit now featured the slender styles paired with the tight Sponge Bob Square Pants tees. He completed the look with white-rimmed glasses.

In 2009 the skinny jeans culture gains deeper roots when the rap group New Boyz titled Skinny Jeanz and a Mic. The first track from the release sought to address the controversy that surrounded their new outfit the checkered and bight neon skinny jeans. Some of the lines sang by the SoCal rap group caused tension in the music industry, the group wanted to recruit the hip hop artist to wear skinny jeans instead of the normal baggy jeans.

They then got a response from Jay Z who addressed them in a rap song saying that he cannot wear the skinny jeans because his knots do not fit. So instead he wears the Roc jeans because his knots are so thick. The skinny jeans continue to gain traction in the hip hop industry as more famous musicians embrace the new fashion while dropping the baggy jeans. Kanye West endorses the slim-fit jeans when he says that he made it just so that he could wear skinny jeans. 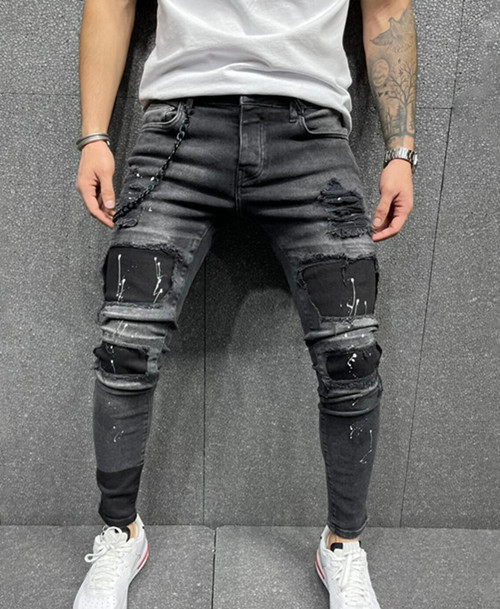 And in 2010 he continued to push the skinny jeans culture by introducing to the rap world Heidi Slimane’s Dior Homme denim line through the track Christian Dior Denim Flow. The song clearly marked the period where the male wrappers transitioned from wearing baggy denim jeans and adopted slimmer fits. In 2010, the skinny jeans culture had taken over a huge part of the hip hop industry.

And famous rapper like Lil B from Bay Area quit from his group famously known for wearing baggy jeans and Vans. The rapper loved the Skinny jeans so much that he went ahead and dedicated a whole track to the slim fits back in 2012. In 2011 Lil Wayne appeared at the VMAs in women’s leopard print jeggings and in the same year, Jay Z who had initially rubbished the skinny in one of his songs was seen wearing the slim fit. 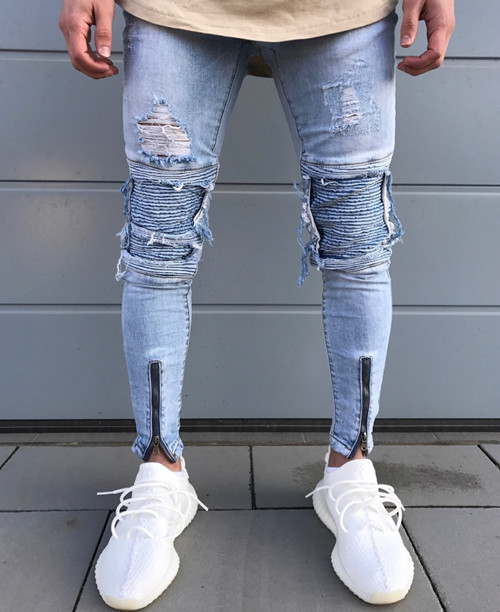 The second outfit that he wore to the performances at Coachella was an artfully distressed pair of jeans paired with a vintage shirt. In 2015 skinny jeans seemed to have undergone a revolution as the jeans were produced in extremely skinny cuts but with improved aesthetics. The slimmer cuts were then embellished with chains. They also had longer lengths thus easy for them to be stacked consequently becoming baggy at the ankles.

By 2017 skinny jeans had reached their peak in the world of hip hop and famous designers like Mike Amiri, premiered the ripped jeans, some of his other releases had bandana patches and chain embellishments. By this time the skinny jeans had become tighter and to make them stand out they were paired with chunky sneakers. 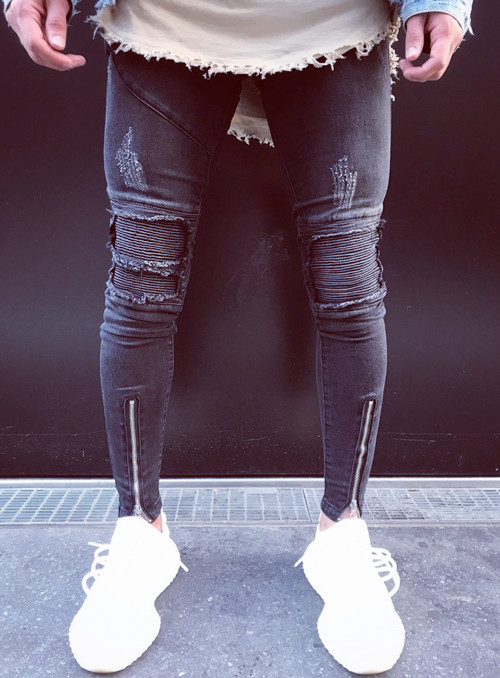 Skinny Jeans culture only gained momentum in the mid-2000s, its influence was so strong after many rappers seemed to prefer it over baggy jeans.

To the extent of releasing tracks purely dedicated to the slim-fit jeans.

Famous rappers like JayZ eventually bowed to the pressure despite rubbishing the idea of skinny jeans, recently we have seen more hip-hop artists grace the red carpet with skinny jeans.