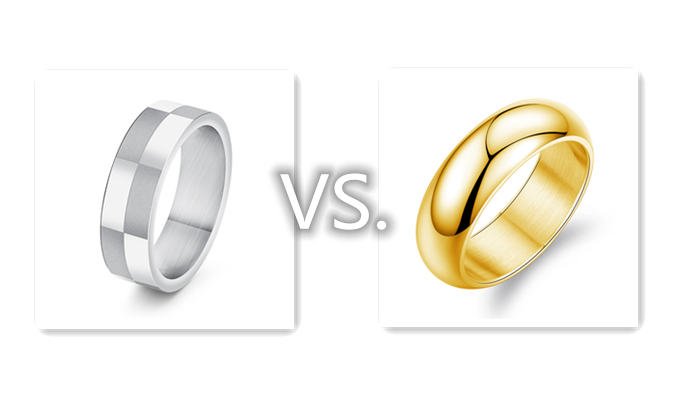 In the past few decades, tastes have drastically changed. Many are moving away from what is considered old-fashioned and appealing and opting for contemporary and unique pieces.

That’s the case when it comes to white gold and yellow gold. In the past, yellow gold was the go-to ring color for wedding bands; that’s changed.

Even as people explore their options in material and color, white gold is still somewhat seen as traditional. Many are opting for colors and materials that aren’t considered mainstream, like couples who get black tungsten rings as a sign for their eternal love for one another.

However, in this article, the primary focus is on white gold and yellow gold as we try to determine which one is the winner.

To find the results, you need to understand the history of both metals. So let’s dive in.

The brief story and introduction of yellow gold

Gold remained to be a sort after metal since its discovery millenniums ago. It is mentioned as far back as 5,000 years ago, where ancient Egyptian artisans used gold to decorate temples, tombs, and other objects.

Even in modern times, it is clear that gold remains to be among the topmost expensive metals and currency in the world. However, in its natural state, gold is far too soft for daily use.

That’s why the yellow god available outside of currency gets made from combining other metals to form an alloy.

Unless otherwise stated as 24k gold (100% gold), all gold is alloyed with metals like silver, zinc, or copper, all to strengthen it.

You won’t typically find 24k gold jewelry as they scratch and bend easily, which is not practical for something you’d want to wear every day. Gold is measured in karats. The higher the karat, the more gold it contains.

The rest of the composition has other metal alloys. There are different karats in between, but it’s not something you’d readily find in mainstream platforms.

The brief story and introduction of white gold

Before we get on the specifics of white gold, it is essential to point out that gold is naturally yellow.

That said, it doesn’t mean that white gold is fake gold. What makes white gold silver is the alloy metals it’s combined with. The silver color gets achieved by adding metals that include silver, copper, palladium, zinc, nickel, or manganese.

Once combined, they form white gold. However, it is the rhodium plating that gives white gold its eye-catching nature and luster.

White gold also follows the same karat classifications. That means that an 18k white gold ring still contains 75 percent gold and will have a stamp to show for it.

What makes people gravitate toward white gold is wanting to get something other than the traditional yellow gold.

If you do have a preference for the silver-colored rings, ensure that you get a nickel-free option if you’re allergic to nickel. That’s because white gold tends to have a higher nickel content than yellow gold.

Now that we’ve looked at white gold let’s explore its popularity. For millenniums, yellow gold has dominated the scene, but that drastically changed in the past two decades.

Baby boomers were primarily the ones that opted for yellow gold bands, but the next generation had ideas of their own.

The general feeling is that young Gen Xer couples started getting married, they moved away from what they consider to be conformist, opting instead to get something that spoke more to their time.

Subsequently, when the Millennials started settling down, they too opted for silver rings instead of what they traditionally saw with the Baby Boomers.

However, they decided to take it a step further, with more people within this demographic choosing unconventional materials, including wood, bones, and even tungsten, to make a statement.

Even so, the more conservative ones were still choosing white gold for their engagement rings and wedding bands, something that’s echoed in celebrity culture.

Is yellow gold out of style?

The popularity of yellow gold might have dwindled since the 90s, but Megan Markle inspired a return to yellow gold.

In 2019, jewelers and retailers alike reported that yellow gold had made a come-back. We might also have to thank Prince Harry for proposing using a gold engagement ring, too, even though he knew that was Markle’s favorite color.

When it was time to swap wedding bands, it was only natural that those two would be made from yellow gold.

As romantic as that sounds, we can’t say that Markle single-handedly brought back the popularity of yellow gold. Jewelers noted that some couples began liking the appeal of vintage pieces.

For them to have a modern appeal, these rings got an upgrade with regards to style since those worn in the 60s, 70s and 80s tended to look tired and uninspiring.

The bottom line is that we can thank fashion cycles for the renewed popularity of yellow gold.

While it was considered old-fashioned before, it is now termed as “vintage,” hinting that it is both trendy and chic.

Currently, the jewelry is still out on which of these two gold alloys are popular.

Each has its pros and cons, and even that depends on people’s tastes.

The one area that white gold triumphs over yellow gold are how diamonds and other stones look a lot better with it.

Even with that, yellow gold remains superior in being hypoallergenic, durable, and appealing to a wider variety of skin tones.

The return of yellow gold has offset the popularity that white gold has garnered, but how the competition fairs can only be determined by time.