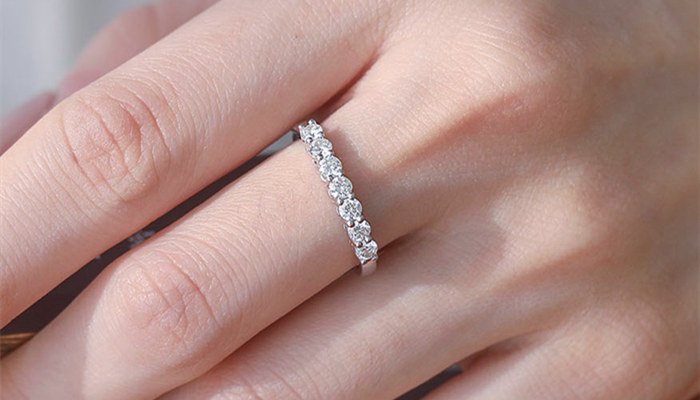 After the sparkles of a wedding come marriage, which is not a completely smooth journey. That is why it is important to celebrate every small milestone you experience with your partner. Whether it’s your first anniversary, first house, or even first child. And what better gift can you give on such occasions if not an eternity ring.

This ring is meant to serve as a reminder of the love shared between a married couple and that the love is eternal. But have you ever wondered where the idea of eternity rings came from? Also, if you’re thinking of getting one for your spouse, you may be confused as to which design would be the best.

Or you could be anxious about finding the most creative way to present her with the gift. Not to worry, this post is for you.

Aside from educating you on the origin of eternity rings and when they should be gifted, we will also give you tips and some creative ideas on how to get the right ring and present it.

Rings have been used as a token of love since time immemorial. They were gifted to women who wore them on the left finger, including eternity rings. This tradition was derived from an Ancient Roman belief that the left ring finger had the Vein of Love (Vena Amoris), which led straight to the heart. 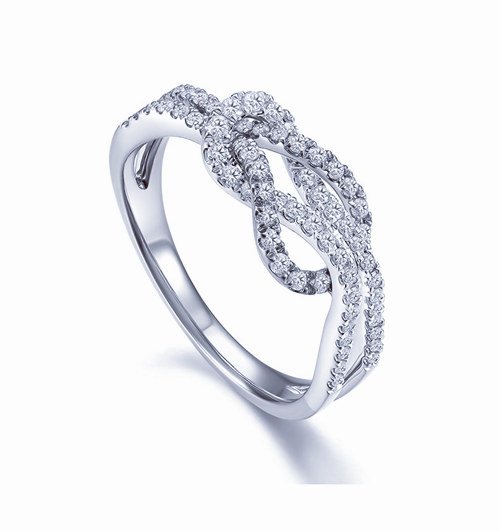 Eternity rings date as far back as 2000BC, where they were first seen in Ancient Egypt. At the time, the Ancient Egyptians gave eternity rings as a token of eternal love and life, and not necessarily to mark a specific occasion. The common design of the ring in that period was mostly a simple metal band sometimes set with one stone. Another common design was band-shaped in the form of a snake swallowing its tail. This was a common symbol that represented eternity or infinity at the time.

Fast forward to the 18th century, the design of the ring evolved to identically cut gemstones set all-around a metal band. The continuous line of gems was seen as a representation of unending love. In the 19th century, diamond eternity bands were introduced. They didn’t become popular, however, until DeBeer’s campaign that started in the 1960s and lasted through the 1990s. The campaign was DeBeer’s attempt to increase the global sale of diamonds by expanding the market to married women. As such, it became a tradition to gift diamond-crusted eternity rings during anniversaries.

Today, the tradition is still held. The only difference is that an eternity ring doesn’t need to have diamonds all around the metal band. Depending on the diamond’s size, some found this design to be uncomfortable to wear, especially, when it rubs against the skin. As such, you can find eternity rings with the diamond setting only on the top half of the metal bands. These are what are called half eternity rings, and they are equally as meaningful and beautiful as the full settings.

When Do You Traditionally Give an Eternity Ring? 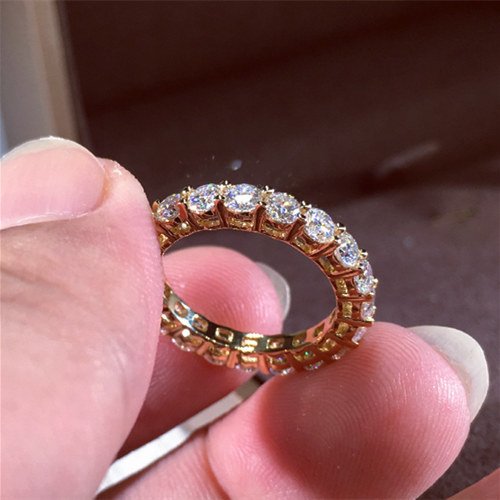 Initially, when eternity rings came into existence, they were just a token of eternal love that was given on any occasion. Over time a tradition came about, that dictated eternity rings should be gifted as a way of celebrating a special anniversary for a married couple, like the 10th anniversary. At the time the ring signified the time spent together by the couple and the future filled with love that they were yet to share. But as time passed by, eternity rings have come to carry an added meaning. Today, they are also used to signify the cycle of life in a marriage. That is why it is also a suitable gift for a new mother.

When it comes to anniversaries, there is a traditional list that dictates what appropriate gift should be given at a given time. According to the list, you can only gift gemstones between the 40th-55th anniversary and diamonds can only be given during the 60th anniversary. Today, many people have strayed from this tradition, so there is no set rule as to when you can gift your spouse an eternity ring. It can be during any anniversary that feels special for the both of you, even if it’s the first one.

Gifting the ring on the day you receive your first child is also not a bad idea. Recently, as we’ve mentioned, eternity rings have come to signify the cycle of life in a marriage. So, whether it was through birth or adoption, you can choose to gift the eternity ring as a way of marking the day, your family started to grow. It’s up to you to decide which moment is special enough to warrant such a meaningful gift.

Tips When Getting an Eternity Ring for Your Partner. 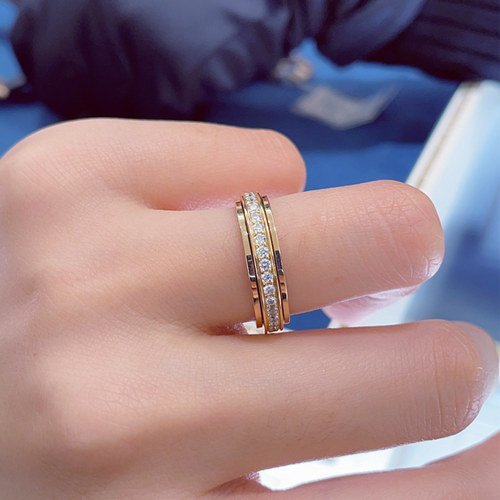 Getting an eternity ring can be equally as exciting, confusing, and nerve-wracking as the time you got the engagement ring. There are so many options and designs to choose from, and sometimes you can’t be sure what your spouse will appreciate. So, here are a few tips that can guide you on the right ring to get:

Before purchasing anything, you need to have a set budget in mind. You want the eternity ring to be special and unique but you also don’t want to break the bank getting one.

Besides, regardless of how beautiful the ring may be, you can’t get it if you can’t afford it.

So, while shopping for a ring, try not to get carried away by the beautiful designs you see. Remember to stay within your financial limit. No one said beautiful had to be expensive.

2.Choose the type of eternity band.

Amongst the many designs of eternity bands, there are three common themes.

There is the full eternity band, with diamonds or gems going all around. There are also the three-quarters and half eternity bands where the diamond setting is mostly on the top part of the band.

A full eternity band is the most expensive choice of the three.

Also, since the half eternity band is priced lower, you have the option of getting better-quality stones or diamonds for the setting. Simply let your budget and preference guide you. 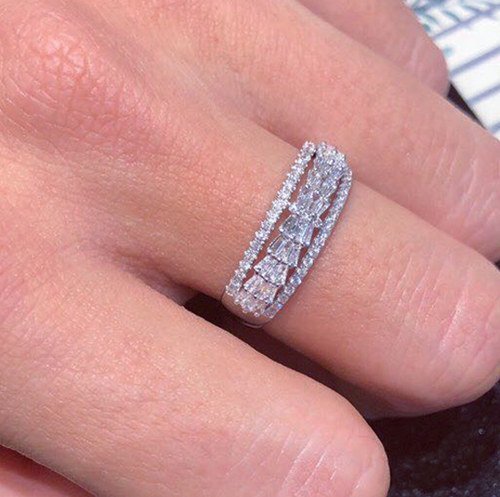 Diamonds are usually the traditional choice for most people even today. But nothing is stopping you from opting for an emerald or sapphire setting.

It’s okay to think out of the box, especially if it’s what suits you best. Just think about your spouse’s personality and what they’ll likely appreciate more.

4.Pick the design of the ring.

There are many options to pick from when it comes to this but remember it’s a matter of preference.

If you still can’t seem to make up your mind, then let your budget guide you. Another great guide is the wedding set your spouse already has.

Likely chances are that the eternity ring will be stacked with the wedding and engagement ring, so you might want to get a ring that will match or stack well with those two rings.

Creative Way to Present Your Eternity Ring to Your Wife.

So, you have the ring, now what’s left is how to gift it. You can always opt for the boring ring in a box or you could make the moment as special as the meaning the ring holds. Here are a few creative ways to inspire you on the best way to present the ring to your wife:

Serve it to her with breakfast in bed.

If your wife enjoys sleeping in, then this is a great idea for you. You can make her favorite breakfast with the ring on the side and serve it to her. It is a romantic way of saying good morning and expressing your love to her, especially with the eternity ring as an early morning gift.

Present it with a song or a poem.

It could be a song you both love or her favorite poem. There’s no better romantic moment than serenading her with a beautiful ballad before presenting her with the special ring. A ring that is meant to signify the eternity of your love.

Keep the ring in another gift.

If your wife enjoys surprises then she’ll appreciate this element of surprise. She won’t be expecting the ring and, in the end, she’ll get two gifts instead of one. A good way of adding fun to it is by getting her a boring gift and place the ring inside there.

Use flowers or chocolates.

Ladies love these two gifts; you can never go wrong with either one or even both. You can place the ring on top of a bouquet of her favorite flowers. Or you could place it in s box of her favorite chocolates. Makes sure the ring is somewhere visible, you wouldn’t want her to miss it.

Eternity rings are great gifts and a great way of rounding out your wedding set. As you pick one and decide on how to present it, think about what represents you as a couple, you don’t have to blindly follow tradition. After all the ring is a symbol of your love and the future you have yet to share.