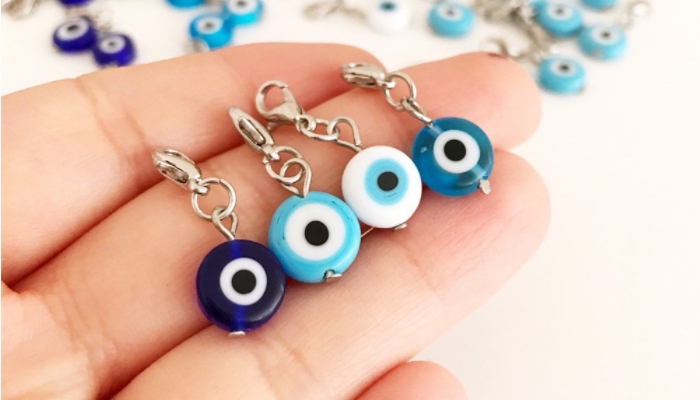 Do you believe that if someone looks at you a certain way, or if particular people, known to you or not, glance or gaze in your direction, their eye may have the power to upend your life, even leading to your downfall, despite the fact that you may be doing so well in life, and that these things can happen because they possess an evil or a malevolent eye?

Well, many other people across the world and in pretty much all cultures believe in this and that some people just don’t have good intentions.

If these people look in your direction, especially with envy and not good intentions, they may curse you because their gaze carries curses.

And to counter the effects of the evil eye, one needs to wear an amulet or talisman or chant some sacred text that not only protects from the evil eye’s evil but also brings more good to the life of the wearer.

It is an age-old belief that dates back thousands of years, and in this article, we’ll guide you through the history of the evil eye.

The History of the Evil Eye 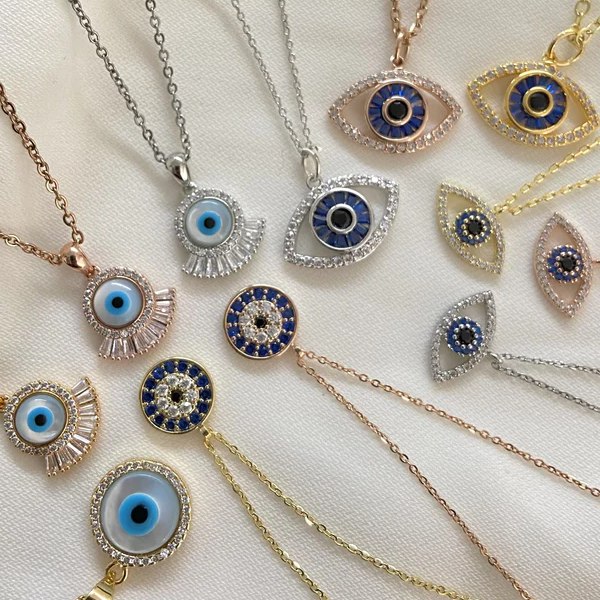 While the evil eye is a belief that is deeply ingrained in most of the world’s cultures and societies, it is interesting to see that it is one belief system that’s also taken root and is talked about in all religious settings among Christians, Muslims, Hindus, folk religions, Jews, Buddhists, and even pagans.

So, wherever you go, and whoever you interact with, anthropological accounts of witches and people believed to be cursed have mentioned the evil eye or the malicious glare, which is often directed towards unwitting, innocent, and the subsequent harmful repercussions harm the affected.

Now, you will agree that for a belief to be this deeply ingrained in any society, it must have even deeper roots. And so, thanks to books and other recorded references, we can take a walk down memory lane and appreciate and understand the origins of the evil eye beliefs.

When did it start? 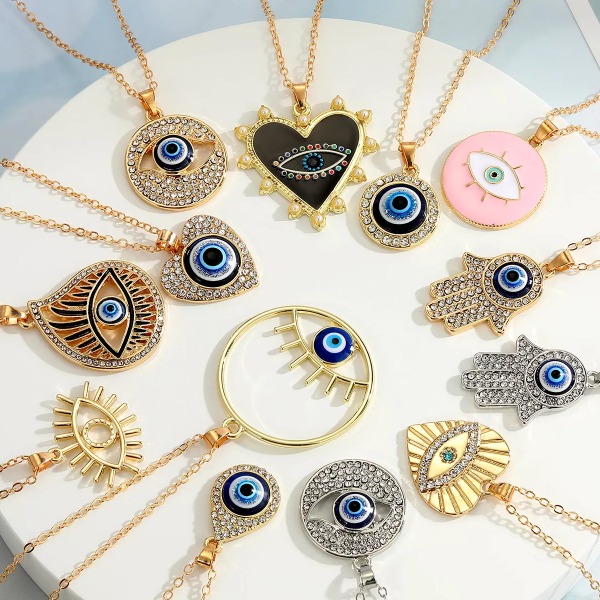 The evil eye, also called Nazar in Turkish, Mati in Greek, Malocchio in Italian, Deochi in Romanian, Ayn in Arabic, and Kazakh in Persian, is defined as a supernatural form of belief in curses from evil, ill-intentioned, or malevolent glares.

Belief in this belief and the subsequent symbols date back 5000 years ago during the Upper Paleolithic Age. It’s since remained an iconic symbol in Christian, Jewish, Buddhist, and Muslim faiths.

Some of the earliest recordings and accounts of the evil eye predate the times of the ancient Greeks and Romans. The ancient beliefs and the iconic evil eye symbol have been recorded in many classical antiquities.

There is also literature from the 6th century BC that point to the use of the evil eye symbol on the Chalcidian drinking vessels, the eye-cups, and here, the symbol was incorporated as a form of apotropaic magic (protective magic, in layman’s terms). The symbol was seen as a tool for turning away evil influences or harm. It was also believed to have the power to deflect misfortune from spaces or individuals that the evil eye glare or gaze may befall.

The evil eye symbol was also imminent in most of the Mediterranean region, and like the other ancient cultures, it was believed that the evil eye caused injury and misfortune, or in other instances, it was responsible for supernatural events that caused significant harm/ damage.

The use of the symbol kept spreading, as different cultures and communities believed that the evil eye symbol would cancel out the effects of the evil eye. 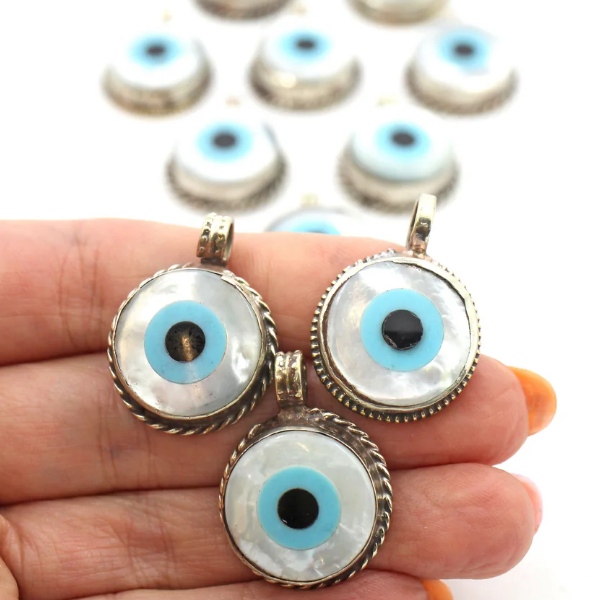 The evil eye amulets are shaped like an eye, often with a black dot at the center to represent the pupil and iris, followed by light blue, white, and a darker shade of blue to represent the rest of the eye. Consequently, the blue evil eye symbol is the most common type of evil eye.

Other than the eye-cups from the Chalcidian League located on the shores of the Aegean Sea, where the drinking vessels had the symbol of the evil eye engraved, other groups adopted the creation of the evil eye amulets, shaped as blue eyes made of glass beads.

This was the most popular version of the glass eyes for the Persians, Romans, Greeks, Phoenicians, and the Ottomans.

It is also important to note that the idea of the evil eye is quite widespread in other cultures, but it is more prevalent in West Asia, the Mediterranean, and also the Balkans. 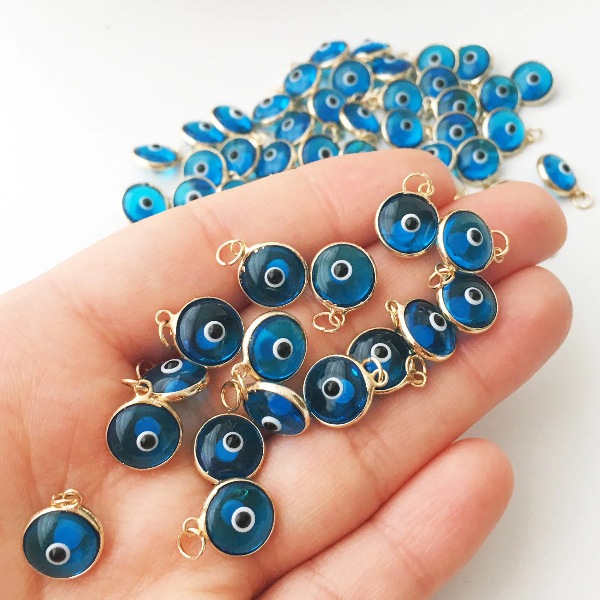 The idea of the evil eye has been featured in the Jewish Rabbinic literature a number of times. In all the featured texts, the use of evil eye amulets and talismans is the best way to ward off the evil eye’s negative effects.

Some cultures adopted or improved the design of the evil eye amulets’ symbol, with the Hamsa a common alternative to the evil eye, particularly in the Middle East or the Cornicello (symbol of the horn) common in Southern Italy.

They also had Eye-Idols, as was uncovered from the archeological evidence believed to be from the c.8700-3500BC from the Egyptian Tell Brak Eye Temple, where these figurines were used as offerings to the gods. 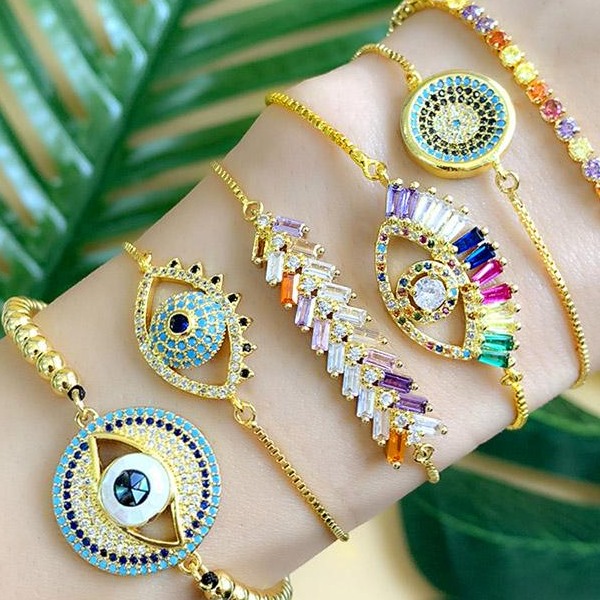 Classical antiquities, referenced by several Greek thinkers and authors like Plato, Hesiod, Callimachus, Plutarch, Diodorus Siculus, Pliny the Elder, Aulus Gellius, and Theocritus, in at least 100 works, share their accounts and mentions of the evil eye.

These texts also mention indigenous Greeks from Greek and Levant whose old artifacts incorporated the evil eye. In these accounts, the authors give their descriptions, perceived meanings, and functions of the evil eye.

And in one of these explanations by Plutarch, the eyes are the chief source of the deadly glare/ rays which spring from the eyes like poisoned darts but only from the innermost recesses of individuals that possess the evil eye. 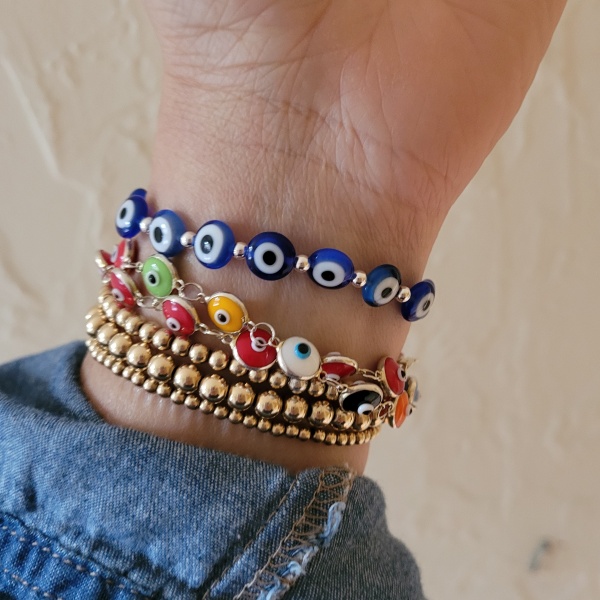 To Plutarch, this was a source of wonder and caused incredulity. Pliny the Elder, on the other hand, noted how some African enchanters have an incredible power of fascination with their eyes and that their eyes can even kill the person they fixate their gaze on.

Beyond these two poems have also been written about the idea of the evil eye. In one piece of poetry by Vergil (Publius Vergilius Maro), a poet from the Ancient Roman era by one of their ancient Augustan period poets, the evil eye is mentioned in conversations between two shepherds, Damoetas and Menalcas.

In this passage, Menalcas laments over his stock’s poor health as he asks, ‘what eye has fascinated my (tender) lambs?’ 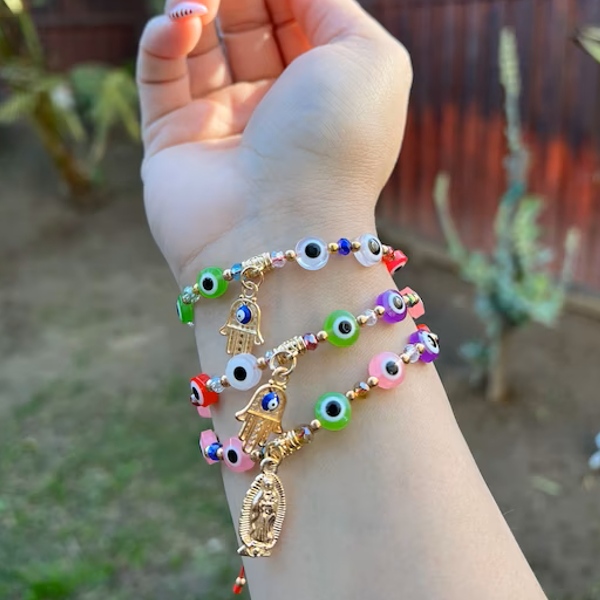 As mentioned above, pretty much all faiths believe in the evil eye too.

The influence of the evil eye is mentioned in the Quran by the prophet Mohammad; folk religions have also mentioned it and talk about the need for and use of talismans and amulets for protection; there is also mention of the potential effects of the evil eye in the Bible when the 10 sons of Jacob, all fair and handsome men are asked to use different gates when entering Israel and to cover up to avoid malevolent stares by the locals. 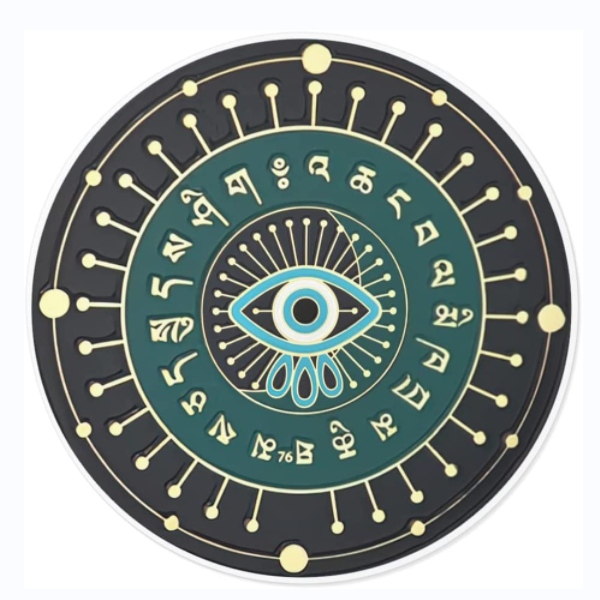 Over the years and across cultures, different amulets and talismans have been used to protect from the harmful effects of the evil eye. Talismans or apotropaic elements have been created, and these talismans are meant to turn away or prevent harm.

These protective elements include balls and discs in concentric white and blue circles in dark blue, light blue, white, then dark blue – from the outside to inside.

They represent the evil eye talismans, common today in most parts of the world, as they were often worn as bracelets or necklaces. The evil eye bracelet and the Hamsa evil eye are quite common.

Note that the Hamsa Evil eye is one of the apotropaic elements that is hand-shaped with a blue or a green eye sitting at the center of the palm.

It is a popular protective amulet in the Middle East but also popular across other cultures. It has 5 fingers, all spread out, and according to Sunni culture, the Hamsa Hand is associated with the 5 pillars of Islam. The people believed it offered protection from the harm and destruction of the evil eye curse. 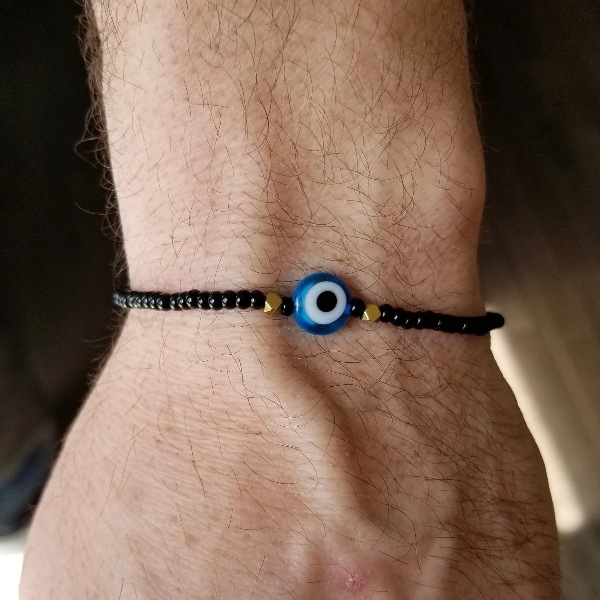 Though very few people understand its meaning, the ones who do uphold the ancient beliefs that give these bracelets a lot of power. You can buy your evil eye bracelets from any flea market, and you will see them in different places, although hanging down from strategic spots.

Most bracelets feature the blue and white glass evil eye symbols intense on metal chains or leather cords. You may also find others studded with diamonds and sapphires and painted in vibrant and fine enamel tones. 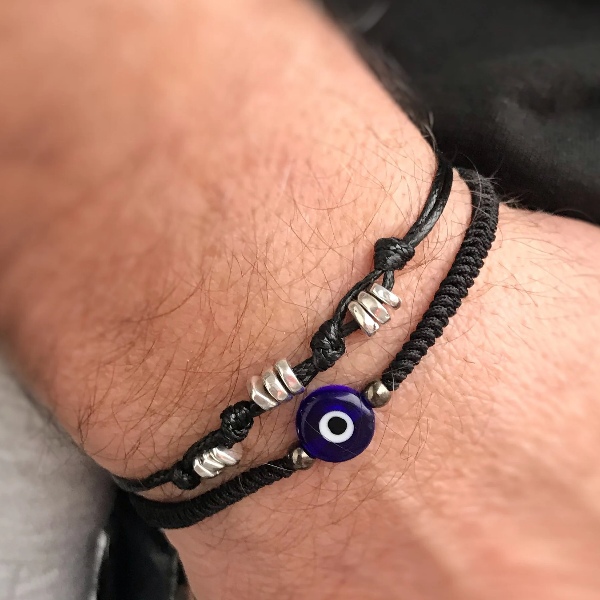 Whether you wear the bracelet on your left wrist or hang it from your home’s or business establishment’s entrance, the talisman is generally meant to protect from the malevolent eye/ gaze, which may lead to loss of income, poor health, injuries, bad luck, confusion, etc.

It is one of the oldest beliefs that is still believable to date.

So, if you believe in the power of the malevolent gaze from certain individuals, you may want to get yourself an evil eye bracelet, Hamsa with an evil eye, or any other talisman.