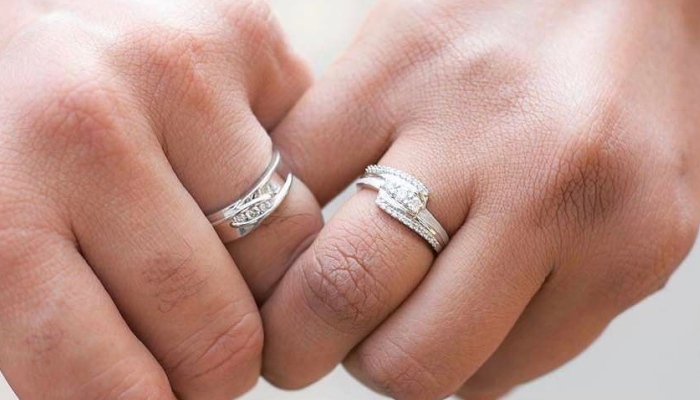 What is an anniversary wedding band? 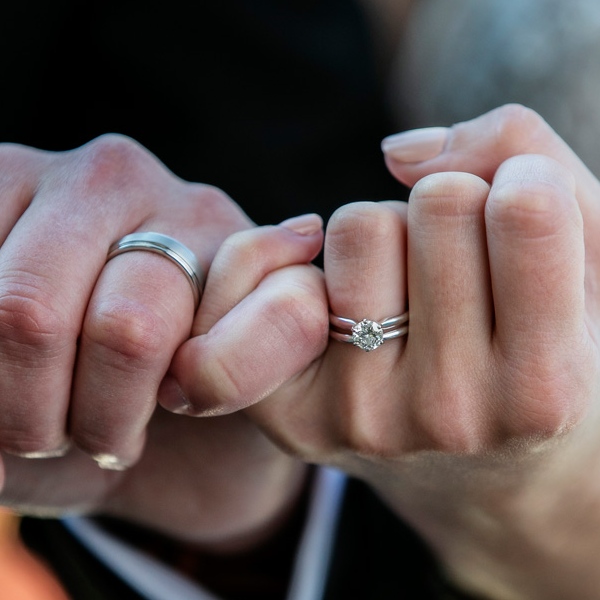 An anniversary ring or wedding band is the ring you gift your partner or a loved one who is celebrating their wedding anniversary.

It can also be given annually, depending on your feelings and intentions and the number of years you are celebrating.

But unlike wedding rings, anniversary rings are quite versatile, but they are not necessarily diamond rings.

In most cases, they are made of diamonds and/or gemstones like sapphires, rubies, and emeralds. Some of the anniversary rings lack diamonds, though.

What is the purpose of an anniversary band? 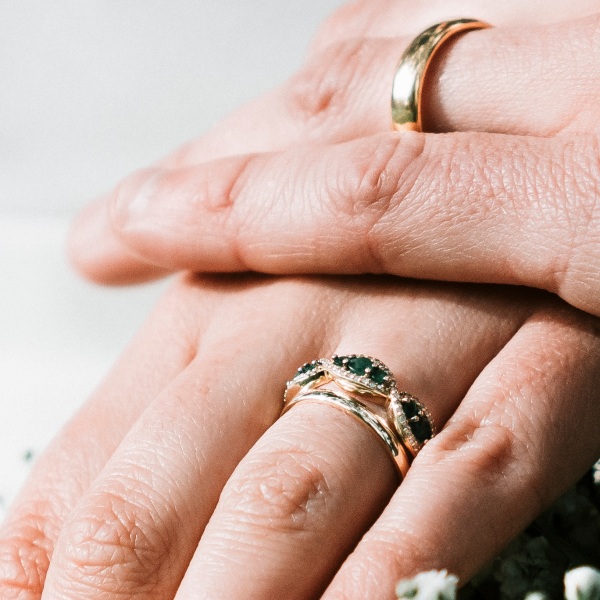 These rings are quite symbolic and are considered a mark of joy and love for the couple’s accomplishments. In other instances, the anniversary rings represent a way of solemnizing marriages and other important moments in marriage. 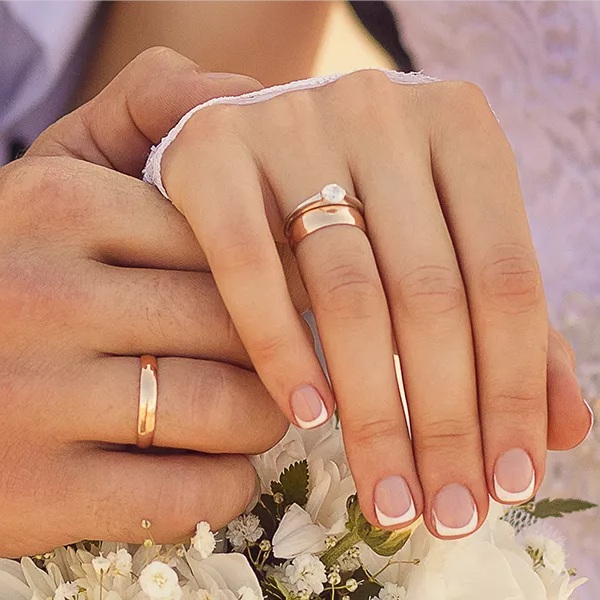 And so, in most cases, the anniversary wedding rings passed between and through the couple mark the important moments they have been through while also serving as a reminder of the important feelings, terms, memories, and experiences collected over the course of the marriage.

As a result, the ring you select should be the one that matches the occasion perfectly, and also it should match the celebrations. Often, the anniversary rings aimed at celebrating 25 or 50 years of marriage are grander than the rings for marking a 2-year-anniversary.

Finally, anniversary rings are important for couples wishing to renew their vows.

Difference between a wedding band and an anniversary band 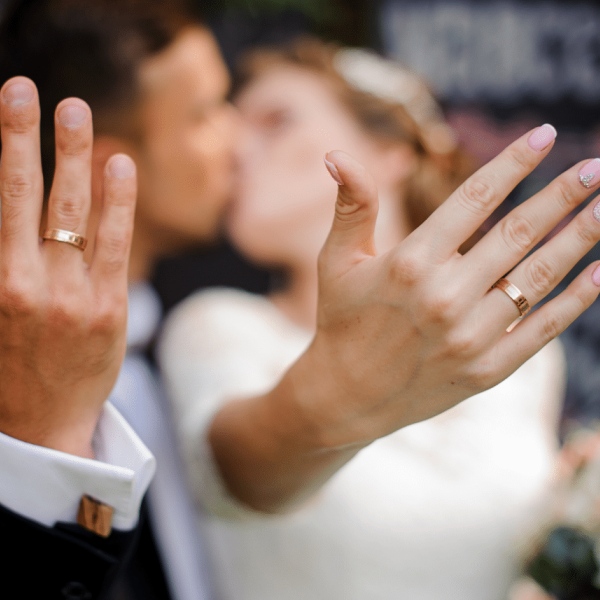 While they sound familiar to a large extent, the wedding and anniversary bands have a number of differences, but the biggest difference between these two types of bands is that while wedding rings are quite subtle, the anniversary rings are not.

It should be in the definition of the anniversary rings that these are bolder and non-subtle rings. The wedding bands are usually much smaller because they are meant to complement the engagement ring and not be overpowering.

On the other hand, anniversary rings are a lot bolder, with several stones added to them often because they are meant to celebrate the accomplishments of the married couple. 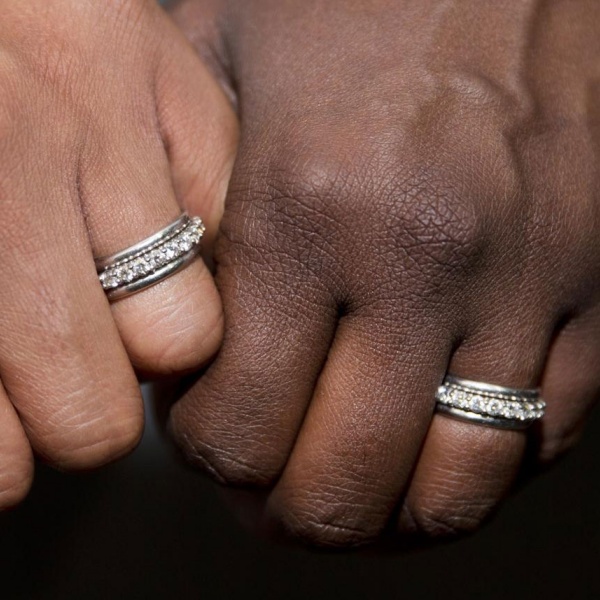 Most anniversary rings are made in classic styles with rows of diamonds. However, the ring settings can vary greatly, but they also include the channel settings, the vintage-grain settings, and the claw settings.

They also vary in width and are made of precious materials like platinum, palladium, and solid gold, among other metals. These are the same materials that are used to make wedding rings too.

For couples with engagement and wedding rings already, the anniversary ring you choose should be intended to complement the engagement and the wedding bands.

But there is no rule on this; a round diamond ring could also be made into an anniversary ring. It all depends on your personal preference, but in most instances, it works best if you mix things up to match your style. 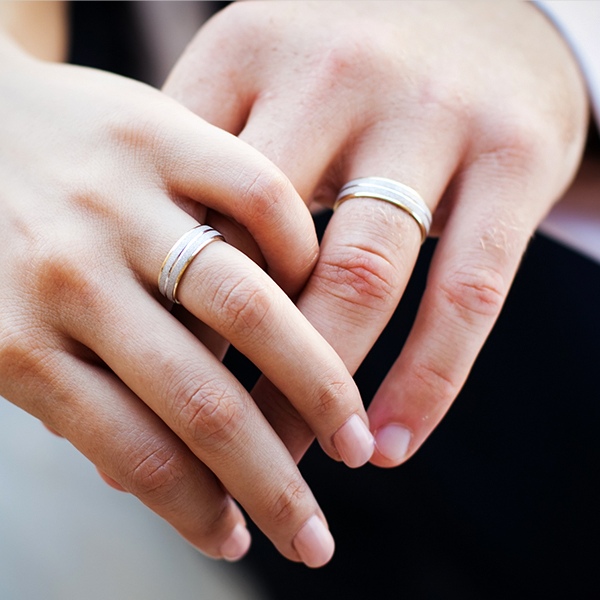 Ultimately, what matters in your choice of anniversary rings is not the style or design elements incorporated but the meaning behind the ring and what it symbolizes to the couple. So, what the ring looks like to other people doesn’t really matter.

In most cases, the anniversary rings are made using the traditional wedding band, and the couple can choose their preferred embellishments depending on their taste and budget.

The good news is that there is a large variety of anniversary rings on the market today, and you can easily find what suits your style and budget. 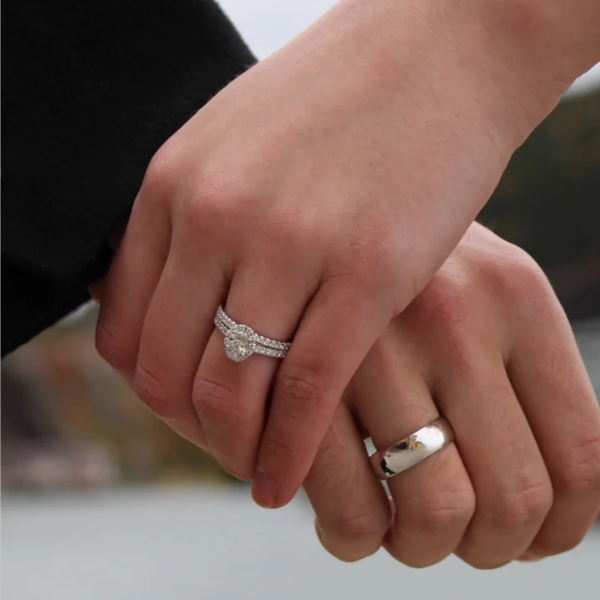 Even with the differences between the anniversary and wedding rings, you can wear the rings together and also add the engagement ring or any other anniversary ring.

And for easy stacking of the rings, the best way for you to ensure that the rings all look good, seamless, and cohesive is to buy them all from one jeweler. You could also wear the ring on the right hand if you don’t want to stack them all up on the same hand. 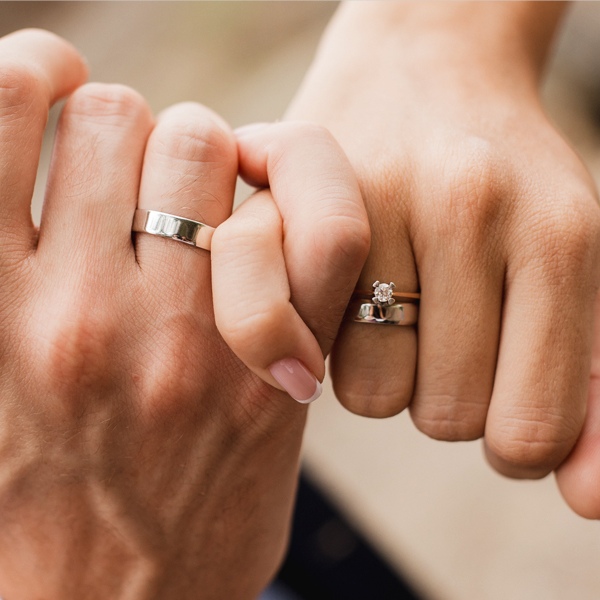 Well, there are no hard or fast rules about the idea of anniversary bands, so they can be given or exchanged by couples whenever they deem fit. This could be on the couple’s 1st anniversary, the 2nd, through to the  25th year anniversaries, etc. 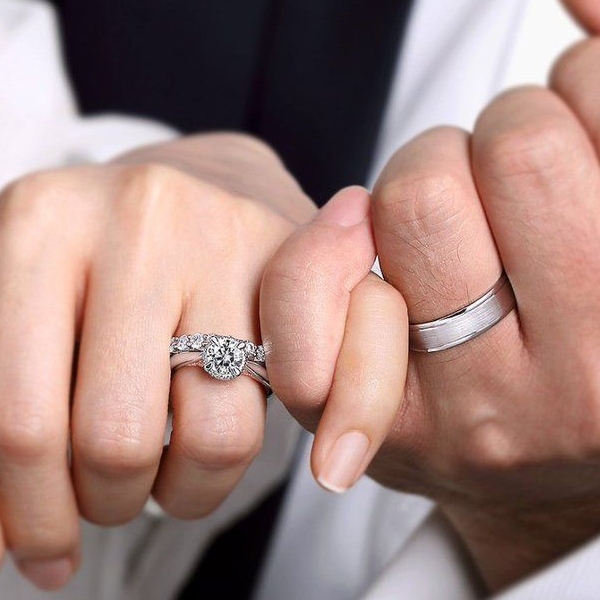 Most first anniversary rings are made of gold and diamonds. For the next subsequent years, the rings are embellished with these stones –  garnets for the 2nd year, pearls in the 3rd, blue topaz for the 4th, sapphire for the 5th year , amethyst in the 6th year, onyx in the 7th year, tourmaline in the 8th, lapis lazuli for the 9th year, diamonds in the 10th year, turquoise in the 11th , jade in the 12th year, citrine on the 13th year, opal on the 14th year, ruby on the 15th year, peridot on the 16th year, amethyst on the 17th year, cat’s eye on the 18th year, aquamarine on the 19th year, emerald to celebrate the 20th year, lolite to mark the 21st year, spinel to celebrate the 22nd year, and for the 23rd to 25th years, sapphires.

That said, most anniversary celebrations are marked on the 10th, 15th, 20th, and 25th year anniversaries. Not everyone celebrates annually or on these important years, opting to celebrate on alternate years.

Can you wear an anniversary band as a wedding band? 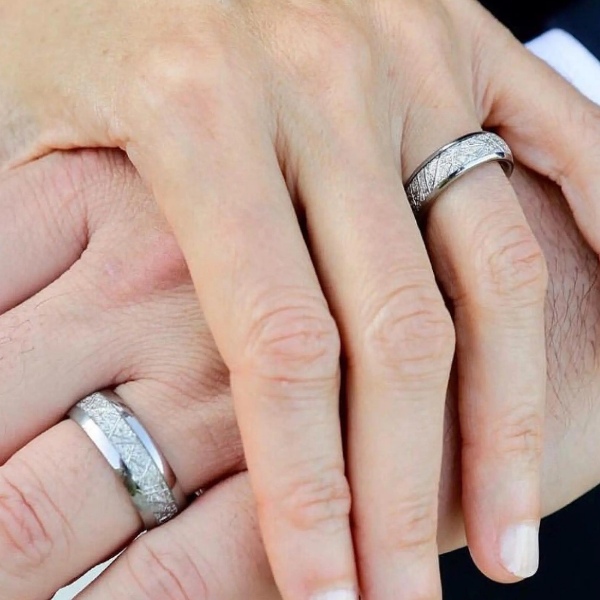 In most cases, people wear their anniversary rings alongside their wedding band and/or an engagement ring.

In such instances, you could coordinate the stones / diamonds with the engagement rings and choose different-colored gemstones.

But this doesn’t mean that some people don’t wear their anniversary rings as wedding rings, and this is often the case when one loses the wedding ring or on days/ nights that you just want to wear one stunning statement ring and not all the rings you own. 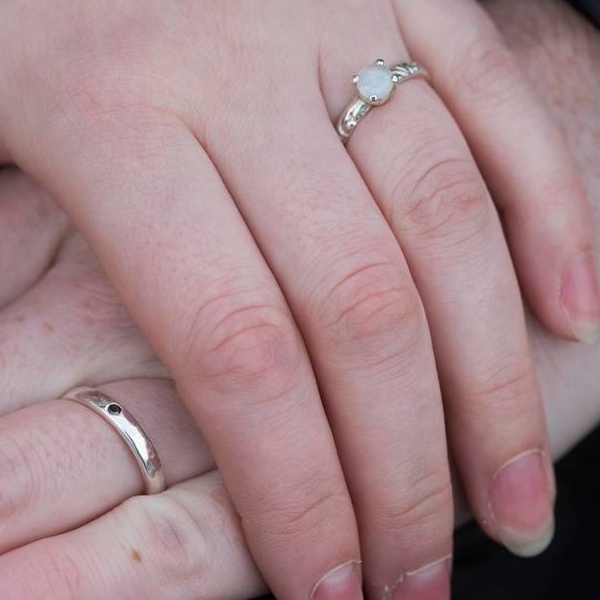 All you need to do is that for versatility, you should consider choosing all three rings made of the same metal, style, and color.

Traditionally, the ring for the first anniversary is made of gold, mostly a simple single ring that can be worn on its own. It could also be designed as a gold stacking ring paved with stones, and you could buy matching his, and hers sets. 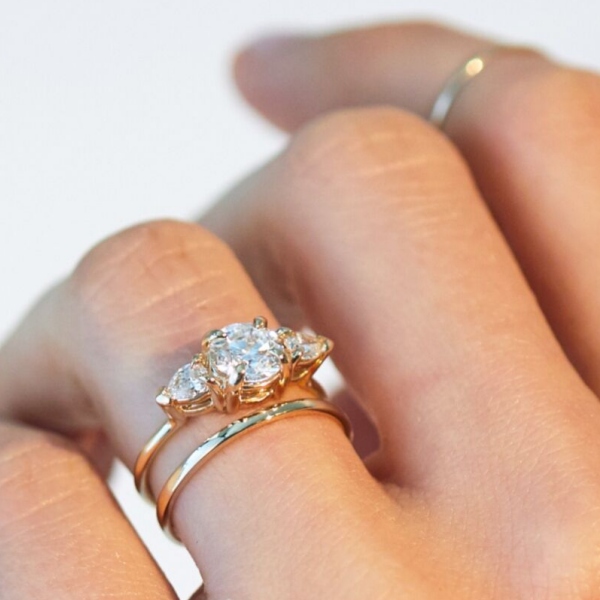 For the 5th anniversary, sapphire is often the gemstone of choice for most couples. This ring is as eye-catching as it’s durable, a symbol of loyalty and truth, and ensures the best celebration.

Celebrating 10 years of marriage is a huge deal, and what better way to celebrate that than with a diamond ring you can stack next to your wedding and engagement ring? 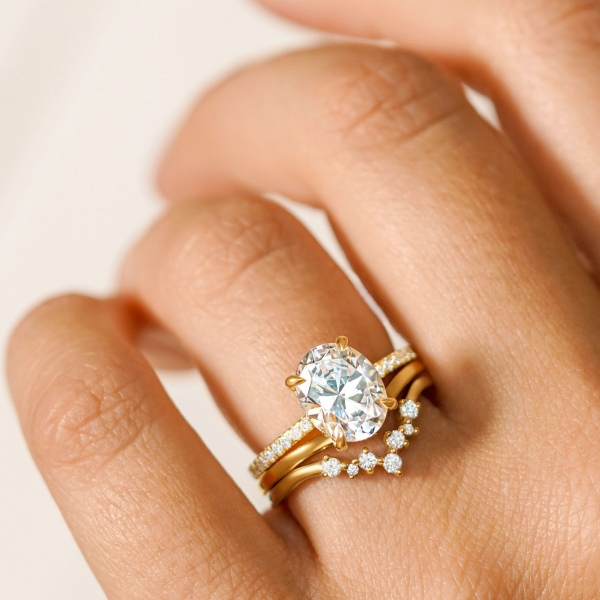 For years, rubies have been associated with love and passion, which is why they make the perfect anniversary gift after 15 years of marriage. They look great with gold and silver metals. 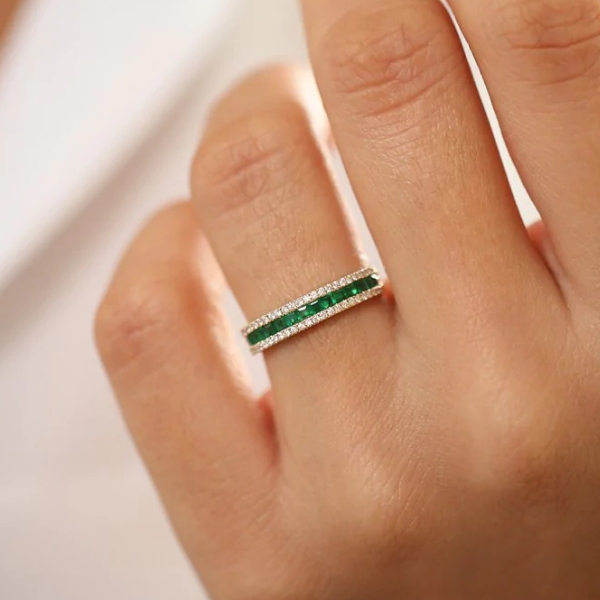 Emeralds are used to celebrate huge milestones in life that are deserving of equally special stones, and the emerald is the perfect stone to mark the occasion. It also adds a great deal of style and sophistication to the wearer. 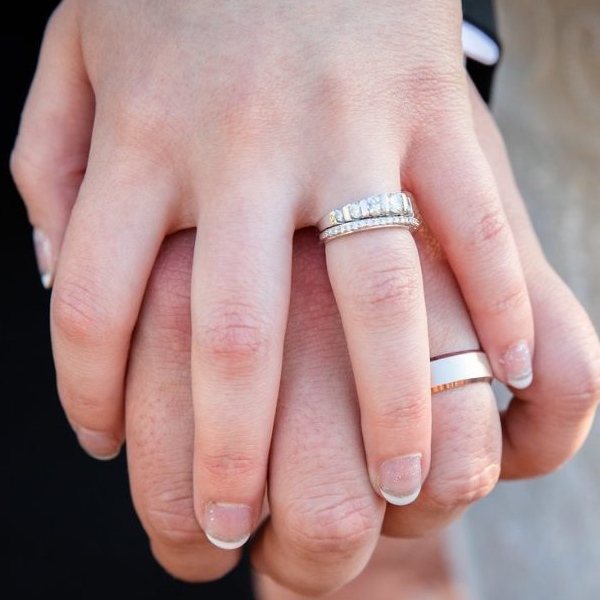 Anniversary rings offer the best way to celebrate love and the commitment made by couples over the years of marriage.

Many types of anniversary stones are determined by the type of stones and metals used to create the rings.

And at the end of the day, you can wear the ring alongside your wedding and engagement rings, or even on your right hand – it all depends on your style and preferences.

For more tips, read our rings section or visit our fashion jewelry section for more.