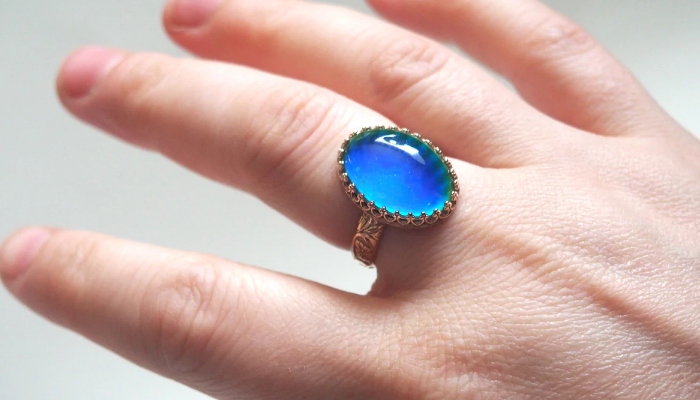 How does the idea of a ring that detects your mood sound like? Do you believe in mood rings, and how did the mood rings come to be?

Well, for starters, after WWII, Americans were tasked with building the nation and ensuring its recovery.

As they put aside thoughts of war and a growing sense of individualism, the economy boomed, and so by the 1970s, the American fashion scene was one of the growing parts of the economy.

By the mid-1970s, the fashion scene had turned a corner, and new creators came up with different jewelry styles, with mood rings being one of the biggest inventions of the decade.

In this article, we’ll share more insights on mood rings, so keep reading!

Are mood ring a hoax? 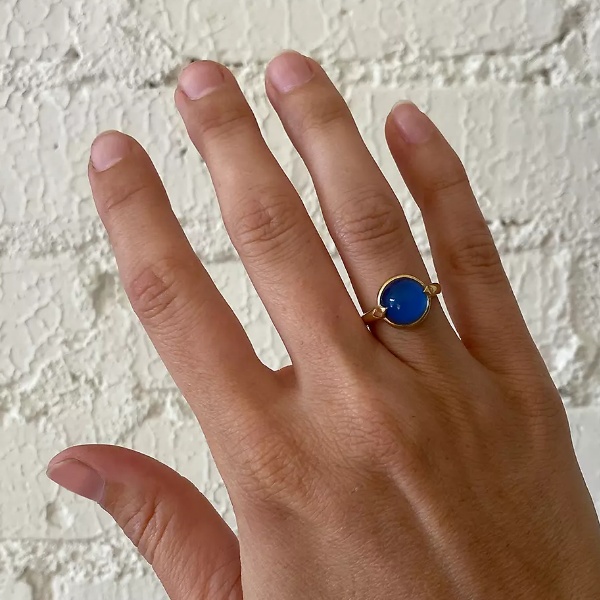 No, they are not. While the mood rings don’t always give 100% accurate readings of the wearer’s mood, there is an actual correlation between emotion and temperature.

So, it is possible that as long as the mood ring is still in perfect working condition, it will shed some light on how the wearer is feeling.

That said, there are cases where the color changes in the mood ring are rather random, meaning they shouldn’t be trusted 100% of the time.

It’s also important to keep in mind that there are fake rings passed off as authentic mood rings, and such rings will not really give the desired results.

How does a Mood ring work? 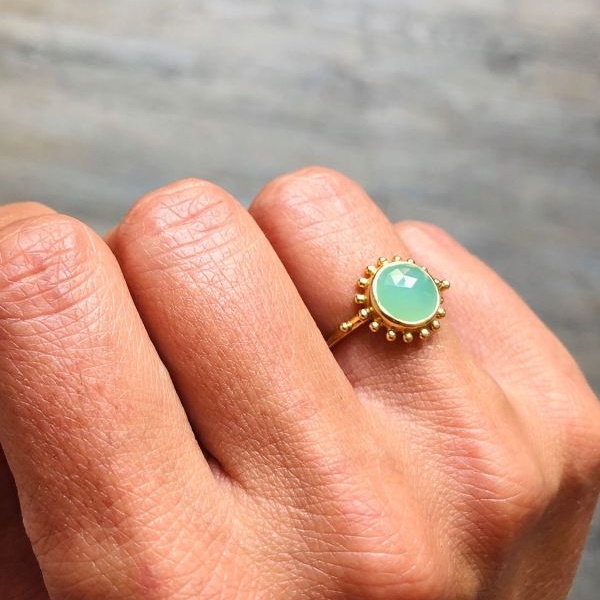 Mood rings work by virtue of the thermochromic properties of the crystals that make up mood rings. What this means is that the crystals will have a specific color depending on your skin’s temperature and so point to your emotions.

This is often the case because different emotions and feelings correspond to different temperatures, hence the color-changing effects and the fact that mood rings can detect the emotions felt at a time.

The rings have the capacity to tell a bit about the wearer’s emotional state, albeit with a small degree of accuracy, all thanks to the fact that the crystals in the mood ring are calibrated with a pleasing green and blue color at rest or when there isn’t much emotional change. 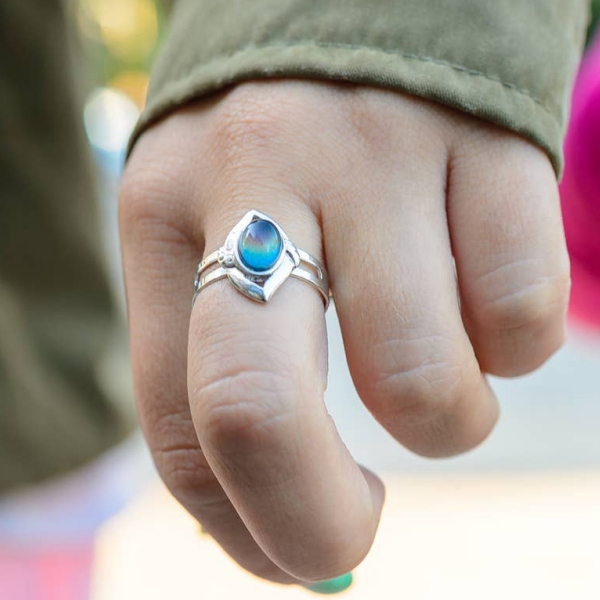 This also correlates to the average human’s normal resting body and peripheral temperature at 28 degrees Celsius or 82 degrees Fahrenheit.

But with an increase in the peripheral body temperature, a change that happens in response to happiness or passion, the crystals react to the temperature changes and will undergo some changes, reflecting the color blue. 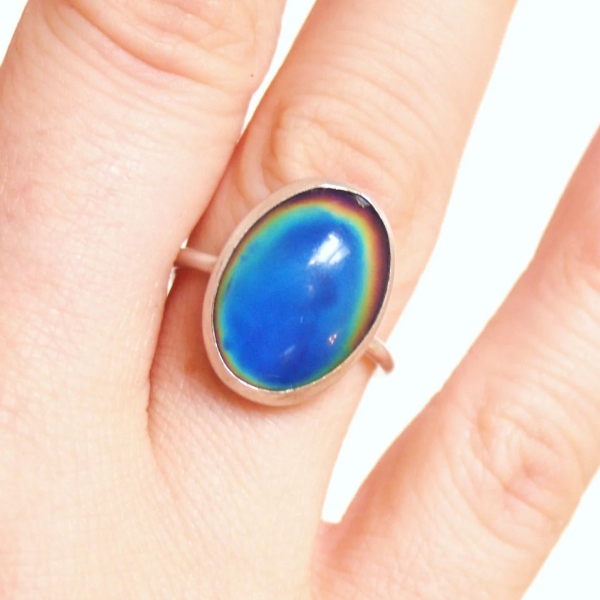 If, on the other hand, you are stressed or excited, blood flow will be directed away from your skin to your internal organs, and this cools your fingers. When this happens, the crystals are forced to twist in the opposite direction, and so, they reflect a different color, often yellow.

And in cases of damage or in extremely cold weather, the mood ring/ stones in it either remain unchanged, or they turn black or a dark gray. 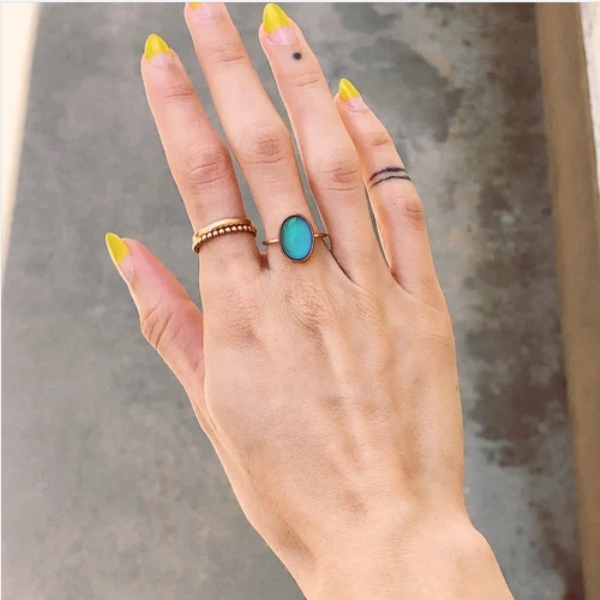 The idea of mood rings was born in 1975 when a jewelry designer, Marvin Warnock, accompanied his friend to the emergency room for his child to see a physician.

As Marvin observed, the physician noticed that the physician used a thermotropic tape on the child’s forehead to read his temperature.

This single action inspired Marvin, and he started doing experiments on thermotropic crystals fashioned under glass as prototypes; and these would turn into the earliest manifestations of mood rings.

But there was a catch. While Marvin worked on his prototypes, someone else was working on the same product based on the body’s biofeedback mechanism. 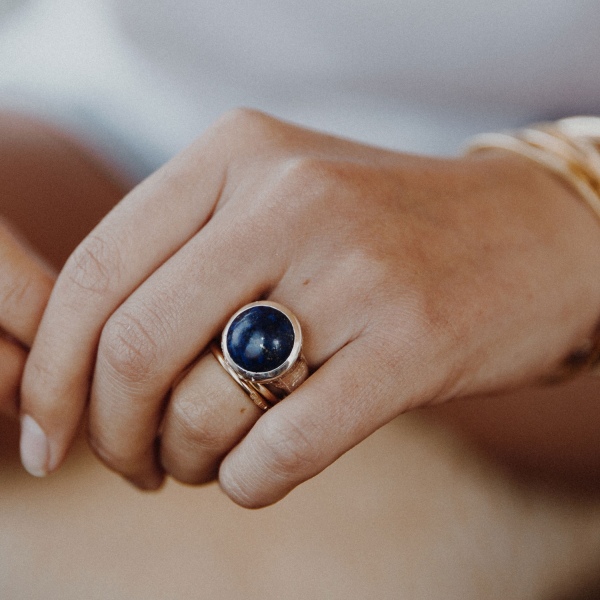 This was also in 1975, and Josy Reynolds came up with the idea of a mood ring dubbing it a portable biofeedback system.

At the time, Reynolds worked on Wall Street as a marketing executive, and thanks to his connections in the financial world, Reynolds convinced a luxury department store to sell the mood ring he’d created.

His prototype was made of silver, and the crystals were encased in quartz or glass. That first mood ring retailed for $45, which is equivalent to about $250 today. 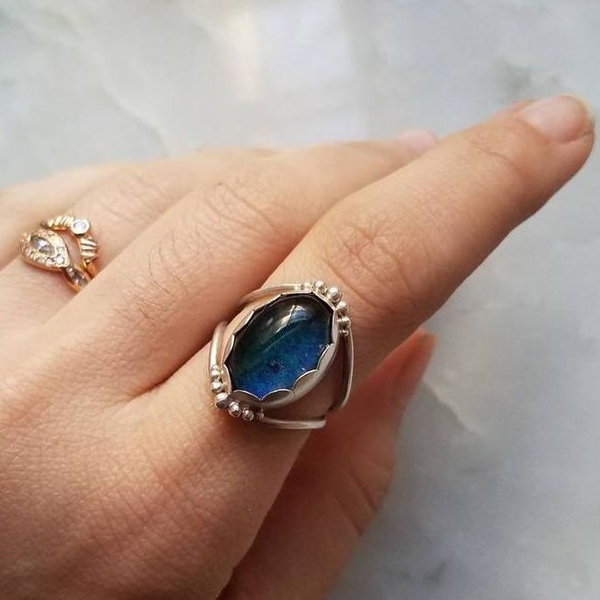 Unfortunately, because he didn’t have a patent, most of his next mood ring concepts didn’t make it to the market.

But in the first months after the ring’s creation, Reynold’s mood rings netted over a million dollars in profit, all from the retail market. At the time, the ring was intended to be a serious jewelry piece rather than some kind of novelty.

Ultimately, his start shone too bright, but it also attracted too many clones along with copycats, and the market was soon full of cheaper, imitation mood rings.

Reynolds eventually ended up bankrupt,  with the influx of new and cheaper mood ring styles becoming mainstream, with stars and the common man embracing the mood rings. 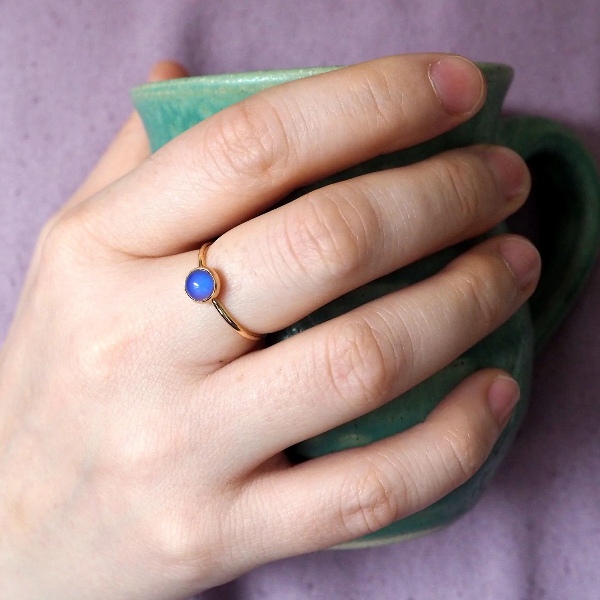 Other big names include the legendary boxer Mohammed Ali who not only wore the mood ring but also wrote poetically and noted that the mood ring reflected his feelings and that it showed blue when he hit the ceiling.

Soon, the mood rings were no longer quirky little rings but important statement pieces that became an important part of American culture. 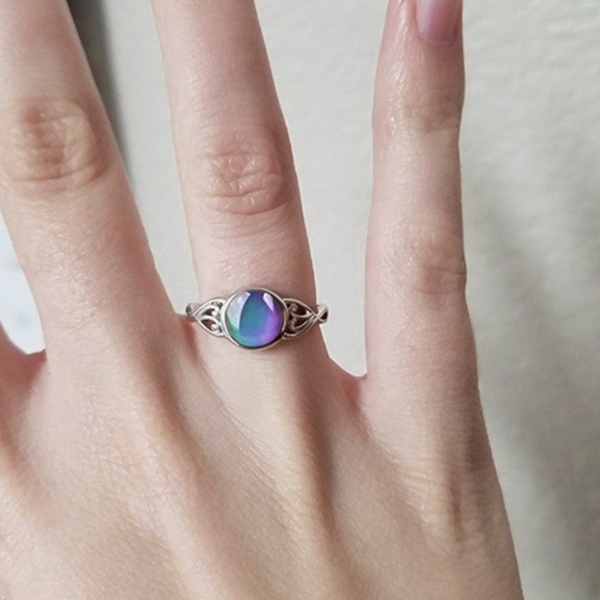 Note that with both creations by Reynolds and Warnock, the mood rings are made of thermotropic liquid crystals that sit under glass and respond to high heat or cold temperatures.

They are calibrated to a baseline temperature of 82 degrees, and the color of the ring changes depending on the temperature changes.

What material is used to make mood rings? 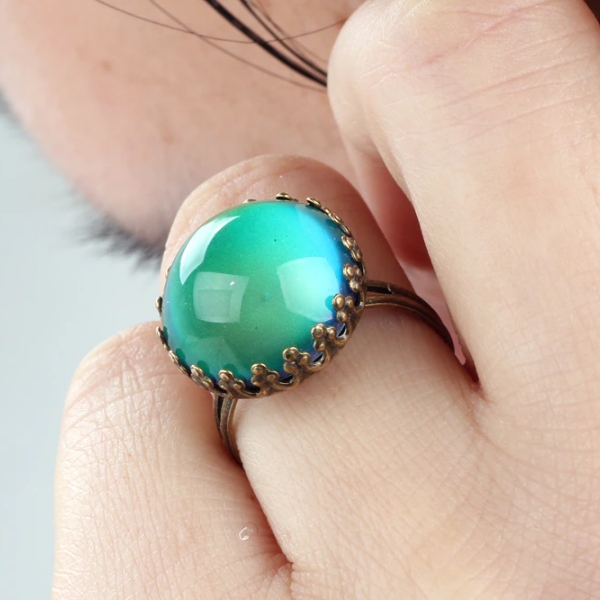 Mood rings are made of different materials, but the combination of materials they are made of can vary. But essentially, the mood ring is made into some kind of sandwich.

The base layer or the bottom layer of the mood ring is made of a metal such as sterling silver, gold, or some other kind of metal alloy that is plated in gold or silver, say over brass. 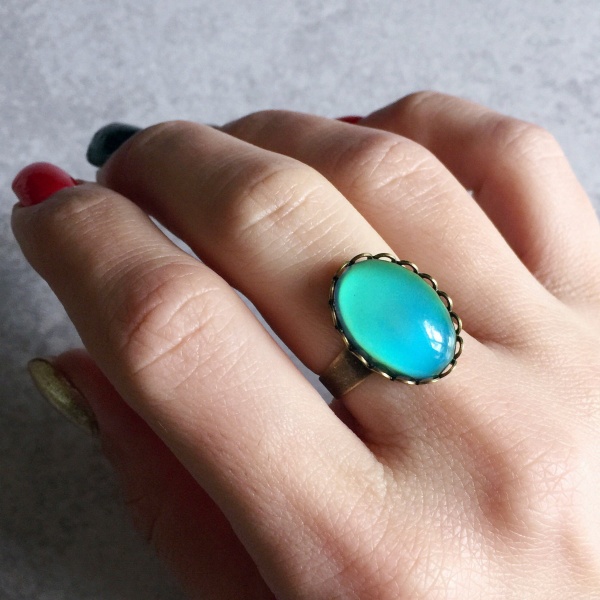 The metal detects the temperature changes in the metals and the crystal, and this combination of materials results in the color changes in the jewelry.

Note that the high-quality versions of the mood rings are often sealed to prevent water and other molecules from seeping into the crystals and causing damage.

The best crystals used are synthetic, and they also feature organic polymers that are highly sensitive. In most cases, the polymers are based on cholesterol molecules, and as the ring gets warm, the crystals gain more energy. 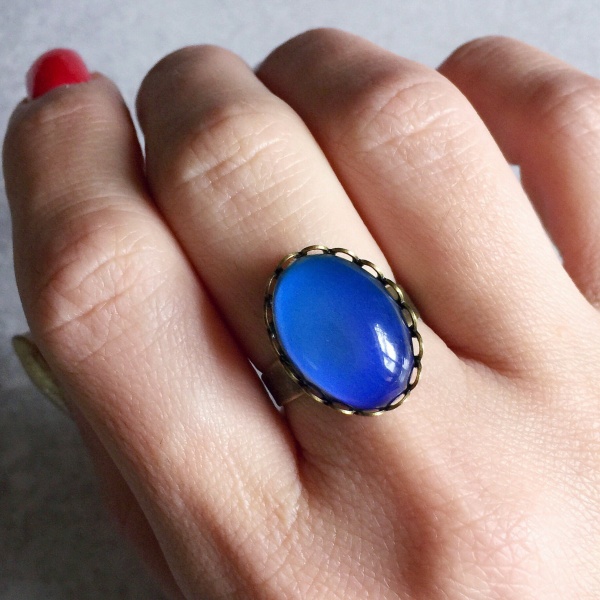 They become agitated in the mix; there is an alternation in how light passes through them, hence the color change.

The other thing you need to note about thermochromic liquid crystals is that they exist in two phases, the nematic, and smectic phases.

In the nematic phase, there are rod-shaped molecules that point in one direction laterally, but then the smectic phase has crystals also aligned in a lateral order. In mood rings, the crystals shift between phases in a disorderly fashion.

In warmer temperatures, the hot and nematic phase is less-ordered, and the smectic phase is much more ordered in the cold.

What is a mood ring made of? 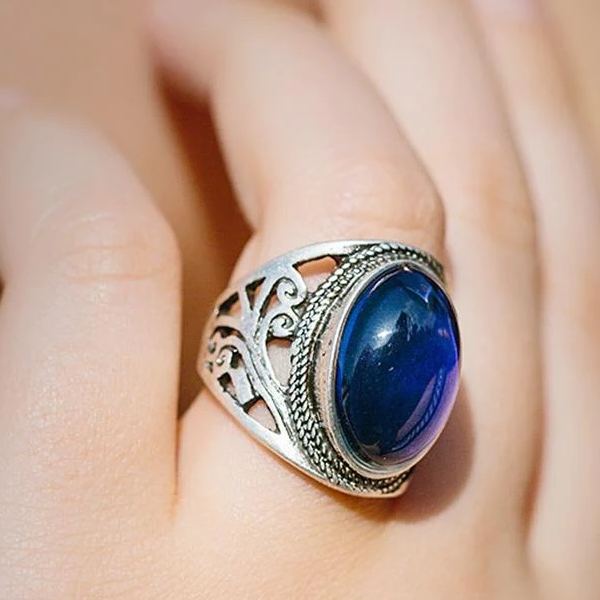 As mentioned above, mood rings are made of liquid crystals encased in quartz or glass, set in sterling silver or gold.

How to Make Mood Rings at home 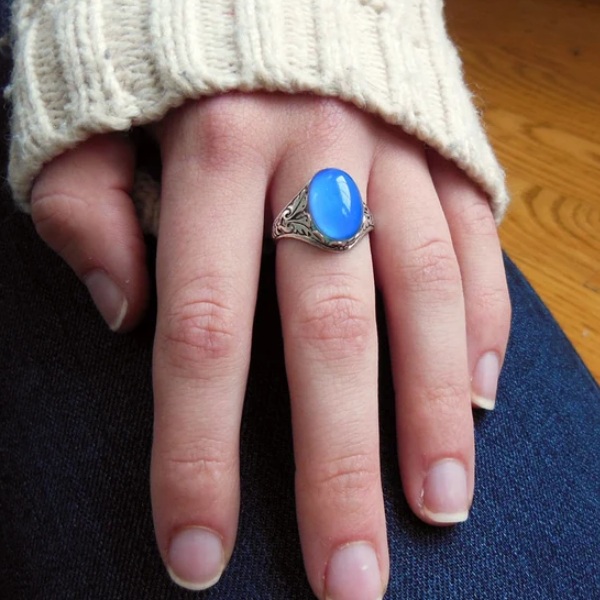 You’ll need quartz, a thermochromic liquid crystal in a glass capsule, and a metal/ ring setting. For practical reasons at home, you’ll need craft glue, decorative glue, a heat-sensitive stone, and the ring base.

With a ring base that fits your ring finger and a stone that fits into the shape of the ring, warm the craft glue and apply it to the base of the metal setting where the stone is to sit.

Next, place the stone on the metal base with glue and allow it to sit for some time for it to dry, making sure that the stone remains in contact with your dinger and that it can change color.

Next, place the decorative beads along the ring border using craft glue. Opt for colored beads in yellow, green, blue, purple, and brown for easy identification and understanding of the color changes.

The mood ring changes color to match your mood or emotion, just make sure that you invest in the best quality mood ring that is made of skin-safe and high-quality materials.

Thanks for reading our post! For more popular posts, please visit our home page for more topics.