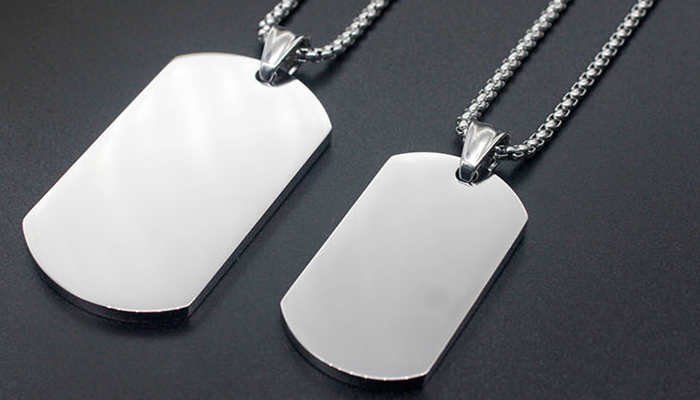 Military dog tags are of immense importance, especially to active military personnel. These tags contain information that is used as a source of identification for living, wounded, or soldiers lost in the line of battle.

Military dog tags are merely the slang used for an identification chain worn by military personnel during active service. They provide personal information in the unlikely event that soldiers are wounded or killed. Usually, each soldier has two dog tags issued immediately a soldier is in active duty. The two dog tags are worn around the neck, with one attached to the chain itself and the other attached to the first chain.

The purpose of the two dog tags is that if the soldier dies, the first tag remains on their body, and during their burial, it is usually attached to the toe by a short chain. The other dog tag is given to close family members or next of kin, by a military scout, as a long-serving tradition.

The primary significance of dog tags is for identification of soldiers, casualty accounting, and grave registration. Modern dog tags are made from non-corrosive and resistant material, making them durable for future use and remembrance purposes.

What information is on military dog tags?

Dog tags usually contain basic personal information, like the soldier’s name (both first and last name), their department of service, a serial number, often their social security number or their identification number, blood type, and religion, if any.

In 2016, the army did away with the use of the social security number on dog tags due to many reported cases of identity theft. Instead, they now use the department of defense identification number.

In case a soldier suffers from severe wounds, the medical information found on dog tags provides vital data, like the soldier’s blood type, any special medical conditions, and previous vaccines administered to the soldier, among many others. An additional red tag may be included in the dog tag in case the military soldier has a unique medical condition that needs special treatment.

The use of dog tags dates back as early as the Roman Empire. The roman legion wore dog tags as soon as they joined the army. The tags were in the form of discs and made from lead. They hung around the neck of the soldier using a leather string and contained the name of the solider, as well as the soldier’s troop.

Later on, in the 19th century, the history books show the use of dog tags by the Chinese military. During their war, both the Chinese military and those that rebelled against them wore wooden dog tags on their belt. Similar to those worn by the Roman legions in the army, the Chinese tags contained their names, date of birth, place of birth, their unit of service, and their date of enrollment.

In the American civil war, soldiers pinned paper notes containing their name and home address at the back of their coats. Other soldiers used stencil identification on their bag packs, while others engraved their personal information at the soft part of their belt buckle.

Britain introduced aluminum disks, instead of dog tags, in 1907. In 1916, a law passed that made it mandatory for soldiers to have two disks made from asbestos fibers for optimum durability, even in hot weather. The first tag was attached to their neck using a long cord and the second attached to the first tag using a short rope. The first tag was used for future identification purposes of the body and was left on the deceased soldier during their burial.  The second tag was taken by top officials to record the death of the soldier.( Here, I wrote a detailed post that tell you why there are two dog tags) Since then, the tags became popular in the commonwealth countries. Some soldiers wore bracelets as they believed the tags would not withstand the harsh weather conditions in various territories. As such, the dog tags were made using a dog tag embosser. Today’s advanced technology uses the CIM (card imagery master) to make dog tags as it provides a wide variety of designs, depending on the requirements of the tags.

There are myths attached to the notch on the dog tags. One of them is that the purpose of the notch was for future identification purposes. If a soldier found his partner dead in the field, they would take one tag back to the commanding officer and stick the other tag in between his deceased’s teeth using the notch. However, the notch was vital to the medical department as it helped them to properly position the dog tag on the Addressograph, enabling them to deduce personal information from the tag into military paperwork.

Why are they called dog tags?

Contrary to popular belief, Military dog tags are not the literal tags worn by dogs. The name simply originates from their similarity in resemblance to the tags worn by dogs as required in many municipalities.

The tags were worn by dogs to enable easy returning of the dogs to their owners, in case they get lost. The formal name for these tags is the identification tag, but the informal dog tag is more prevalent for use by civilians.

As discussed above, military dog tags contain essential information of active soldiers, like the name, medical information, region, and DOD identification number, which is critical for soldier identification. Its history and popularity continue to grow across the globe, showing the immense importance of a dog tag.

OK, guys. Do not forget to share this informational posts with your friends or someone who is seeking this answer. If you guys want to know more, visit this page here.

Afashionblog.com is an info hub for fashion and fashion jewelry. If you want to follow us. Read more posts on our home page.