Are you a man that is interested in getting your ears pierced, but you just don’t know what the right ear to pierce would be, especially with all the talks about piercings on certain ears pointing to one’s sexuality and what not?

This article is for you. Here we’ll help you have a better understanding of what you need to know before and after getting your left ear pierced.

This is an important consideration because in as much as wearing jewelry is considered pretty much ‘a woman’ thing, there is nothing wrong with men choosing to accessorize too. We live in a very liberal 21st century, but we will all agree that some of the beliefs from the past decades live on and though the idea of piercing modes is not limited to one demographic, knowing what earrings in your left ear actually means is important.

What does an earring in the left ear mean for a man?

Before we look at what it means for men to have earrings on the left ear, let’s first take a look at the historical significance of men wearing earrings.

This is because, at some point in history, earrings and other kinds of decorations were antiquities only worn by individuals belonging to a specific class in society. In Egypt, for example, men wore earrings, and these men wearing earrings did this because they were ranked high in society, and they had to be treated as such.

In Rome, however, the opposite was true where the poor and men that belonged to the lower classes wore earrings to show their status.

Later, the military and the centurions would get their nipples gladly pierced, and they’d wear nipple rings because they believed that this represented courage, and they would wear their piercings with great honor.

In the 13th century, however, the church went on to impose a ban on body piercings of any kind and made it ‘illegal’ or just morally unacceptable for men not to wear earrings.

The reasons behind these restrictions include the belief that God created humans as they are, and humans were required and expected to keep their bodies as God intended. Piercings were seen as deformations and a sign of disobedience to the will of God. Despite these beliefs and the best efforts by the church, some castes would still allow body piercing.

This was seen in thieves, for example, who got their piercings as an act of revolt and as a way to show that they were going contrary to the charters of the church.

They did this in a way that showed that they were the ‘garbage’ of society, not listening to the leaders of the church or even pirates. For pirates, the earring was worn to show their conquest over a ship.

Over time, more and more people joined the ‘non-believers’ by having their ears pierced, and they did this because they believed that they belonged to certain groups.

The left ear piercing and earring for men were taken by some to mean that the individual was a sailor. Others believed that the left ear piercing carried medicinal benefits. This belief might have stemmed from the ancient belief that the persons who had their ears pierced had better eyesight, which was an admired quality at sea. Interestingly, some physicians remain inclined to this belief to date.

The gypsies considered the earring on a man’s or boy’s left ear to be some form of talisman, which is why the 2nd child would have their left ear pierced soon after birth.

They believed that this talisman would protect the second-born child from any kind of fatal fate that the firstborn might face.

So, this earing was a form of protection for the male gypsies. Then you have the Cossack men who wore earrings on the left ear as a masculine piece of decoration that meant that they were their parents’ last living child or only son. Such men were treated with extra care, and they wouldn’t be overworked or punished severely or even sent out to battle.

Many societies and nations of the world have held on to this tradition, and it’s believed that it carries some benefits or meaning.

Meaning of earring on the left ear today.

This noticeable accessory that was previously threaded into the ear is considered a very intimate symbol of the man’s belonging to the sexual majority or that they identify as gay. But to avoid attention or criticism, most gay men wear earrings on both ears. While you may argue that this is not how we should be thinking about people in a world as civilized as ours, the truth is that this is one of those beliefs that is possibly going to last a very long time.

So, you should know that an ear piercing and earring on your left ear points to you being gay, and if you are not, you should be ready to have people mistake your sexual identity.

The good news is that more people are now aware of the existence of different subcultures, and the left ear earring doesn’t just mean that you’re gay.

Some men just find it a stylish option, and they wear the earrings on the left ear to show off their individuality or association with biker groups, for example. Or even subcultures like Emo or Goths.

Why do guys wear earrings in their left ear? If you guys want to know more: this post is for you:  Ear piercings for guys, left or right?

If you are a girl, you also can read this post: Ear piercings for girls, left for right?  We talk about detailed solutions for you!

5 Tips for wearing one earring in the left ear 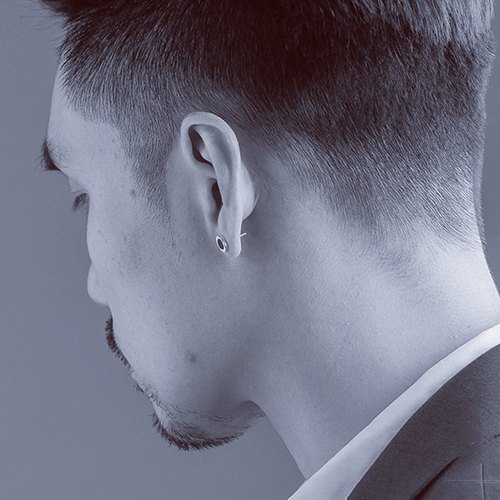 When wearing an earring on your left ear, you will be misjudged, even when the earrings point to your actual sexual preference.

But as you navigate the rather harsh world, keep your head high, be bold, and accessorize stylishly.

People will get used to it after a while, and it will be your identity, and the best part is that no one will bother you anymore.