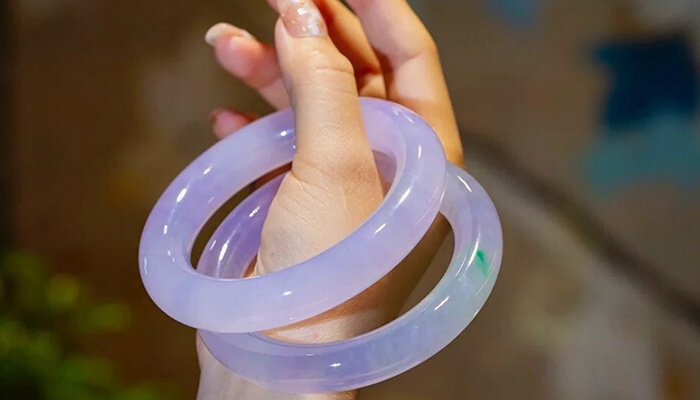 Jade is a highly regarded gem in Chinese history and even in Chinese civilizations today. And the jade bracelets are considered the most important accessory worn by a Chinese woman. But there is more to this gem than its aesthetics and overall beauty.

But first, it’s important to note that jade refers to a metamorphic rock that is naturally red, yellow, white, or green; but it’s mostly green. It is often polished then treated, and these show off the striking colors of jade.

The most common kind of jade used and worn in Chinese culture is the green jade, with an emerald hue. It is also known as 玉 or (yù)  in Chinese. It is culturally and functionally important, with incredible social value, beauty, and practical use. 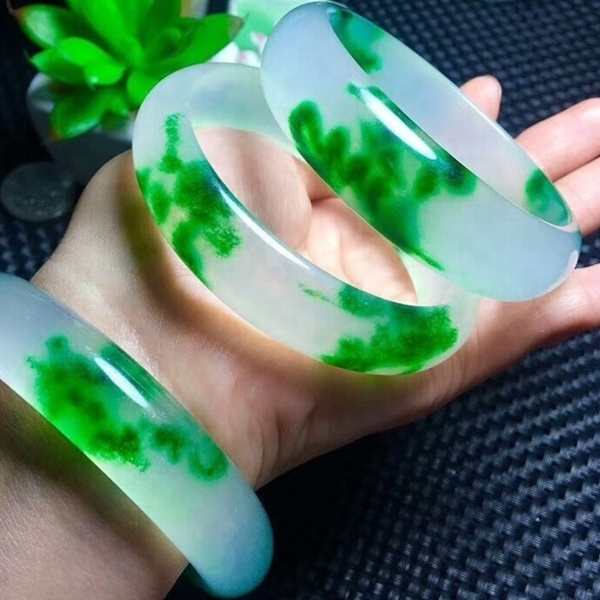 Jade has been around for a long time, and it’s said to have been around from as early as the Confucian times.

Several Confucian texts show that jade was an essential gem in ancient Chinese cultures, and it was believed to be a symbol of modesty, charity, justice, wisdom, and courage.

The jade culture didn’t start in the Yellow River Valley but with the Shang Dynasty, thanks to the archaeological discoveries from Henan Province.

Throughout history, jade was also regarded as Yu or the royal gem, and it’s regarded as the most critical gemstone across Chinese culture. The value of jade is relatively high, and it is compared to the value of diamonds or even gold in the western world.

And thanks to its toughness, jade has been used to make tools and weapons. However, the use of jade and its beauty have been popularized by the use of the stone in cult figures, grave furnishings for the imperial families, and ornate jewelry. 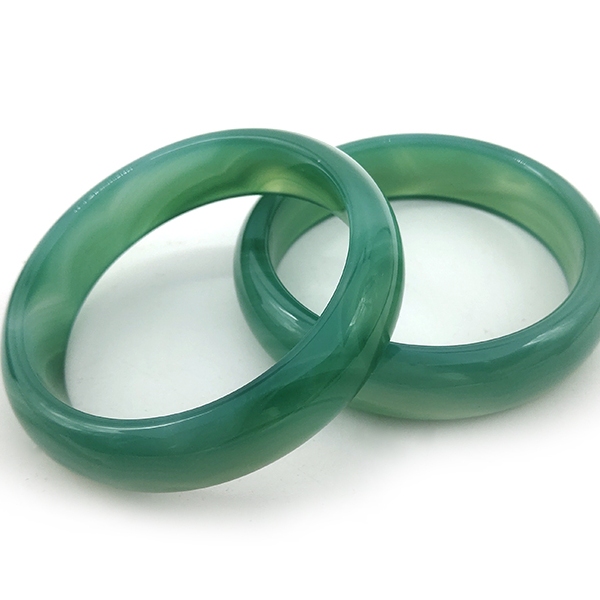 Over the years, jade has held a top spot as one of the most powerful stones, and so it was used often in rituals from as early as 5000BCE in China.

At this time, the Chinese viewed jade as a stone that had the power to protect both the body and the spirit, not just for the living but also for the dead.

However, jade’s value extends beyond Asia. It was equally important to the Mayans in Central America, the Aztecs, and the Olmecs, who valued jade higher than gold.

It was also highly regarded in New Zealand by the Maori tribes, who carved it into their cult instruments and weapons. Jade was also a big deal to the Egyptians, who regarded this stone as an embodiment of balance, inner peace, and love.

What does a jade bracelet mean in Asian cultures, such as Chinese Culture?

1. A sense of belonging 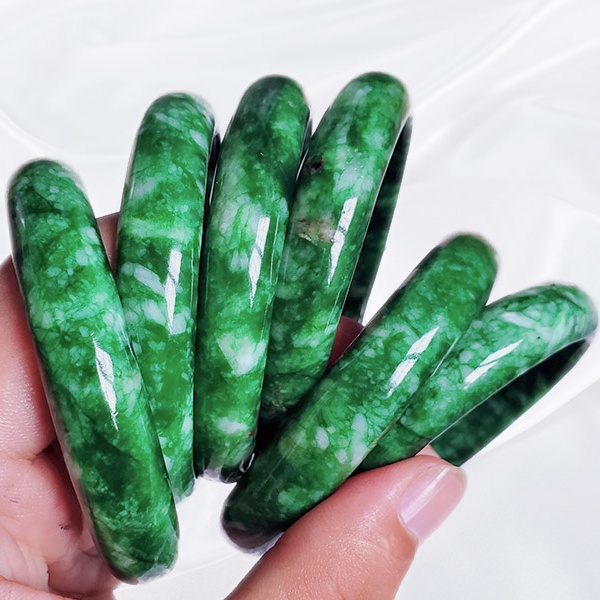 For most people of Chinese heritage, the jade bracelet is one of the most important accessories that they wear because it represents the bond they have with their kin. Generally, wearing the jade bracelet gives the wearer a sense of belonging.

For individuals who feel a sense of disconnection from their roots or heritage, the jade bracelet held in high regard culturally gives them a wonderful sense of belonging as it connects them to their heritage.

It is more than a memento to most people, and it shows that they’ve embraced their heritage and know where they belong.

So, while you may not even speak Chinese or Cantonese, the bracelet is the best way to connect and stay connected to your roots, an accessory that defines the wearer, reminding them where they came from. 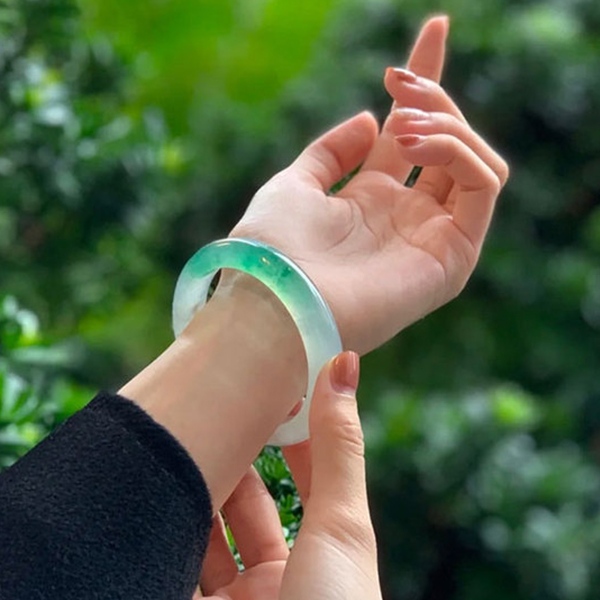 Jade bracelets are accessories worn by pretty much all Chinese and Asian women, who, for the most part, think of this accessory as a piece of jewelry that they cannot live without.

But there is more to it, and the jade bracelet is considered an essential accessory that symbolizes hope. As mentioned above, jade is highly revered across Asian cultures as it is considered a gem that is more precious than even diamonds and gold.

But according to legend, this bracelet protects the wearer from the misfortunes of life. It is believed that if the jade bangle bracelet breaks, it only means that it is doing the job it is intended to do as it will have absorbed the evil intentions that were directed towards you.

Most people will invest thousands in the best quality jade diamonds for their protective powers and elegance. 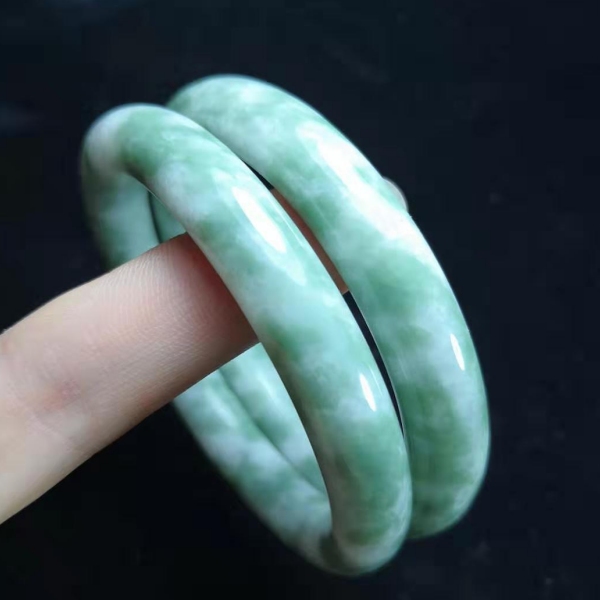 The other importance of the jade gemstone is that this piece of jewelry that is often passed down through families and generations symbolizes the indestructible bond shared by and across generations.

It is often a vital family heirloom that stays in families for centuries.

4. It represents the good in life 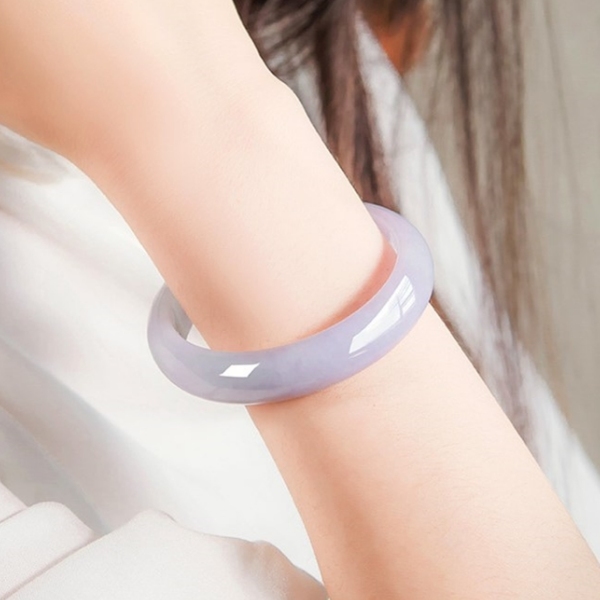 Jade bracelets are also crucial because this gem symbolizes love, peace, eternity, and harmony. All these are thanks to the unbreakable nature of the gem.

Its connections to love and the good things in life are why jade is a popular gemstone in Chinese weddings.It is also believed to be a gemstone closer to the heart than diamonds.

It also represents wealth and money, so jade is often collected as an antique in many parts of the Eastern and Western worlds. 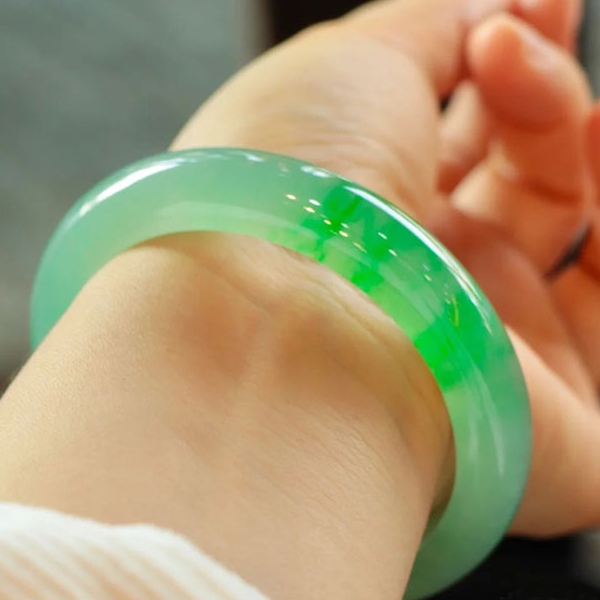 The green-hued emerald jade bracelet is also an essential accessory because it is believed to have the power to balance the Heart chakras energetically and physically.

This means that the jade bracelet will enhance blood circulation while also helping to rid the body of past trauma and past wounds.

In the end, it helps the wearer to find a better sense of openness, love, and understanding.

6. Jade is a precious stone 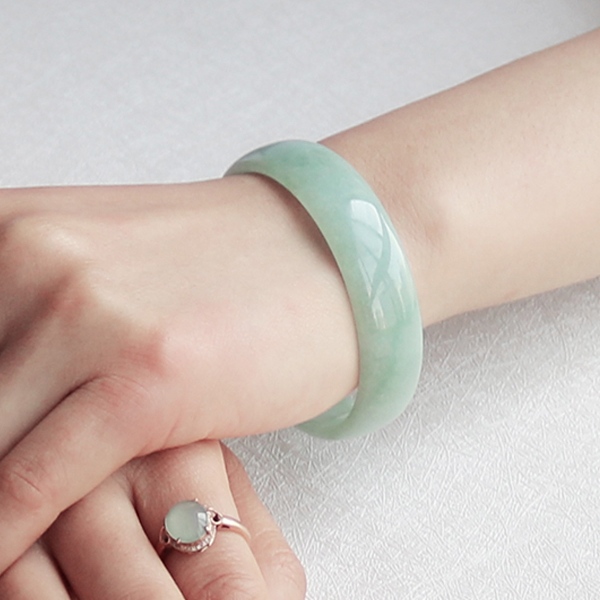 Jade is also a gemstone of great significance because it is a precious stone that symbolizes purity, elegance, and grace.

The Chinese believe that if someone wears a jade bracelet, this accessory will bring them more health, wealth, and good fortune.

As a result, it is often given as a gift to newborns because of the lucky charm energy and the protective energy it carries.

Asians also consider the gemstone highly because of its beauty and elegance. 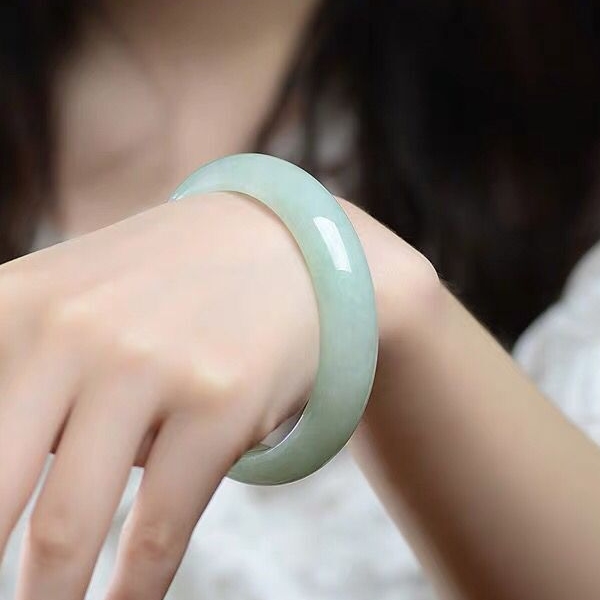 Jade is also valued highly in China and the rest of the Asian cultures because it symbolizes the status held by an individual in society.

It symbolizes the status of the royals, such as the emperors and the empresses, who would wear jade jewelry as part of their robes and headdresses.

It was considered a status symbol not just because it is an expensive piece of jewelry but also because it is believed to have the power to bring the wearers great fortune and also to give them good health. 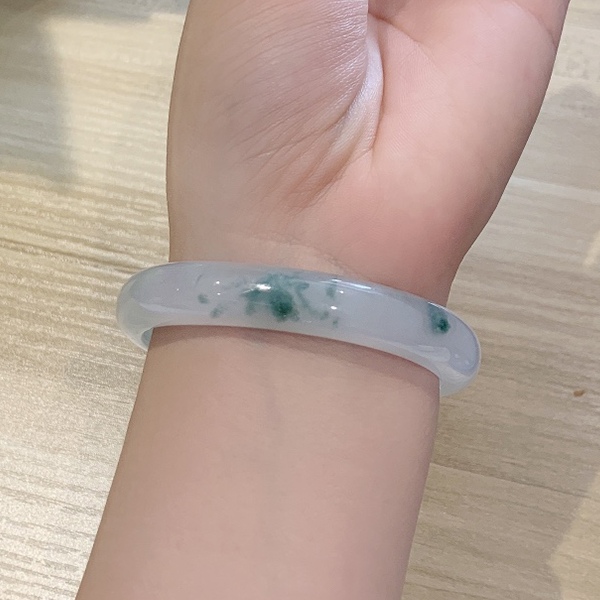 As mentioned above, jade is a precious stone representing benevolence, wisdom, righteousness, bravery, cleanliness, and honesty.

In religious circles, wearing a jade bracelet symbolizes a man of virtue or someone who respects the ancestors and the gods.

In addition to its beauty, jade is believed to have the power to protect the wearer while also bringing them good luck.

As a result, it is often carved into figurines that look like the mythical Chinese figurines, often placed in specific spots in the house to bring in good luck while protecting the wearer. The carvings are often incorporated into necklaces as pendants for the same benefits. 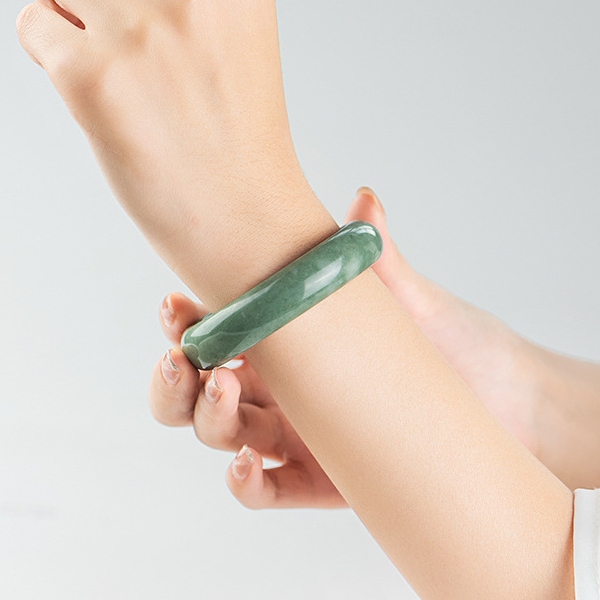 The protective powers of jade also come from the fact that this gemstone doesn’t require any form of purification from the negative vibrations around, thanks to the genuine positive endowment of the stone from heaven.

Jade also emits relaxing and mild vibrations that make you feel lighter and safer. It is naturally clear and serene and will keep you peaceful and content. 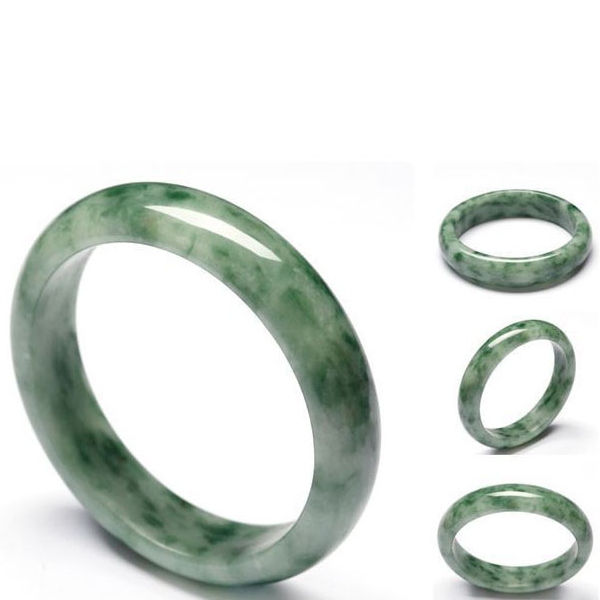 This gemstone is also important because it is a symbol of Chinese nobility. It is as soft as challenging and warm on the outside but hard on the inside.

Jade is a crucial part of the traditional Chinese culture dating back 5000 years from the Shang and Zhou dynasties.

It is not just stunning but also a symbol of political power, representing the essential virtues, good things, and a symbol of a woman’s beauty.