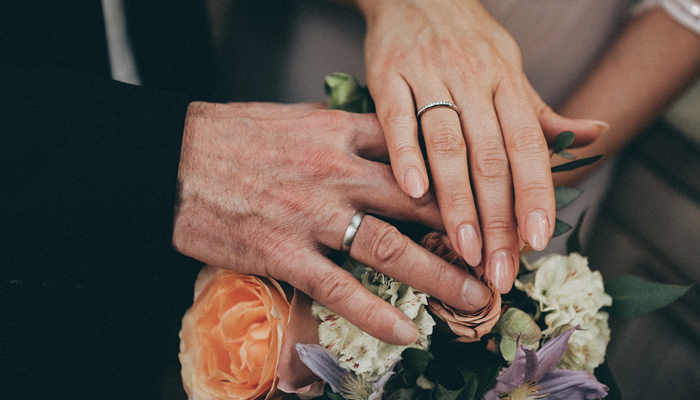 Weddings rings are an expressive and significant symbol that expresses our social status in terms of long-term invested relationships.

Traditionally worn on the left hand, the wedding ring rules make no limitations to wearing it on your right hand as well. So, which countries wear wedding rings on right hand?

Riddled with tradition, different countries and cultures may have varying opinions on how to wear this symbol of union.

Rings have different meanings when worn on different fingers and while you may think that your normal is everybody’s normal, that is not true at all.

The same Romans who introduced to us the culture of marriage proposals by presenting a ring and they too who taught us to wear it on the left hand, later changed their minds and considered the left hand untrustworthy. This is the origin of the right-hand wedding ring.

In India, they have long worn their rings on the right hand because the left was seen as impure. With changes in recent times, however, this tradition has ebbed away and people can now wear them as they please.

Germany and Netherlands also wear their wedding ring on the right hands while keeping the engagement ring on their right hand. This balance signifies a status change from engaged to married.

Wedding traditions of the Jewish community dictate the wedding ring to be slipped on the bride’s index finger during event. When the wedding is done, she can then put it on the ring finger of the same hand.

Turkey and Lebanon nationals traditionally wear the ring on the right hand for the wedding and switch it to the left after the wedding.

Sri Lankan couples wear their rings on opposite hands. The bride wears hers on the left hand and the groom slips his on his right hand.

Regardless of their nationality, individuals who identify as Orthodox Christians also wear their wedding rings on there right hand because of the Latin meaning of the word ‘left’ which references impending evil and mystery.

We also talk about this topic: Why do some actors wear wedding rings on their right hand?

Wearing a wedding ring on your left hand was first popularized by the Roman Aristotle society with the belief that a vein of love flowed directly from this fourth left finger to the heart. This is why it is referred to as the ring finger.

Many Western countries like Canada, UK, Mexico, South America, Italy, USA and France. For these European and American nations, wearing the wedding ring on the left hand and stacked up together with the engagement ring is their normal.

Why Do Some People Wear Wedding Rings on The Left Hand and In Others on The Right?

There are many reasons that influence the nationals of a country to wear their wedding ring on either hand. Be it for cultural, practical, economical or personal reasons, one is at liberty to make decisions that are pleasing to them.

While the left hand has long been cited as the preferred wedding ring bearer, this continues to change as people and societies evolve.

Here are a few elaborate reasons as to why these people chose to wear the wedding ring on either hand.

Different countries have unique and diverse cultural practices that have been in effect within their people, community and region for thousands of years. These differences are very significant to those nationals who are steeped and rooted in their traditions.

This is one major reason for the different opinions on which hand to wear the wedding ring on. If a particular culture considered one or the other hand imperfect or unworthy, important symbols and practices could not be done with or on that hand.

Rings are better worn on the hand that is considered less dominant because it reduces the chances that your ring will be damaged while you work.

Most commonly, the right hand is the active hand that is heavily used by a large majority. However, there is a significant number of left-handed individuals that live among us. This group of people who use the left hand predominantly might prefer to wear their ring on the right hand.

The world as we knew it has changed and continues to change incredibly fast. General opinions are slowly fading away as people embrace their individuality and seek to express it any way they see fit. More and more people are discontinuing and breaking traditions and cultural conditionings that do not fit in with the current times.

New generation couples have the liberty to set their own rules as to wear and how to wear their wedding rings.

Now legalized in many states and countries across the world, same-sex marriages are increasingly on the rise. Gay and lesbian couples at the altar have been sealing their nuptials by wearing the wedding ring on the right hand.

Apparently, there is a relationship between identifying as a gay man or lesbian woman and handedness. The rainbow community believe that the right hand represents a monogamous relationship. So wearing your wedding ring on this hand ensures you communicate your relationship position and status.

Maybe gay and lesbian individuals also use the right hand due to the old phrase “Left is Right and Right is Wrong” that sought to identify gay people by the ear in which they wore their earring as the culture grew popular in the 80s.

In recent times, weddings and marriages are at an all time low. Whatever the reason for this is, women have never been known to sit back and sulk. A breed of strong, independent and single ladies who have chosen to focus on their career and financial success are also influencing the general population.

With feminist agendas springing up every new dawn, women have grown into strong forts of confidence and exuberance. They don’t shy away from cashing out big bucks to buy themselves that enviable diamond ring which they wear on whichever finger or hand they care to.

While anyone on the outside looking in would think this is ridiculous, desperate and unnecessary, these women would beg to differ. Many high-profile women leaders who are unmarried choose to gift themselves with exquisite rings that would have otherwise been bought by their man. Since he doesn’t exist, she sees no reason to deny herself her heart’s desire because she can afford it.

The fall of marriages leading to divorce is more often a result of unfaithful relationships or extramarital affairs. Many men and women are guilty of this and there are generally known tricks to the game. Switching your wedding ring to the other hand that is not the norm of your region may help you score a date other than your mate if you are in for it.

Rather than removing the ring and keeping it away which may be too obvious and risky in terms of loss, many people opt to switch the hand they wear it on.

Where you come from and the traditions that govern your people play a huge role in the creation of social norms and practices.

Which hand to wear your wedding ring on, however, does not have to be one of those strictly observed traditional guidelines.

This union between the two should create their own rules that keep them happy and secure.