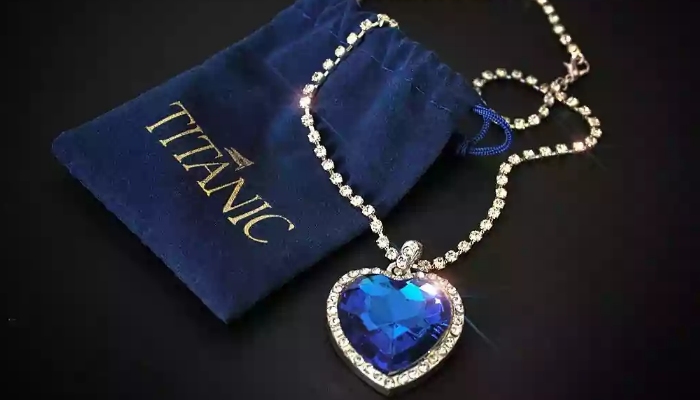 If you watched The Titanic, you know what The Heart of the Ocean necklace is and its significance, but you may be wondering what the necklace means and where it is now.

In this article, we’ll share insights into everything you need to know about The Titanic’s Heart of the Ocean necklace, its real history, and its significance. So, let’s get right into it.

Titanic: The True Story Of The Real Heart Of The Ocean Necklace 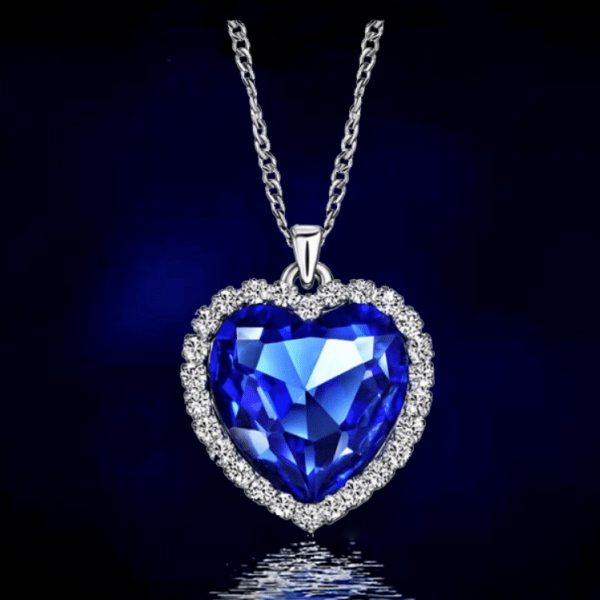 Truth is (always) stranger than fiction, and the truth about Titanic’s infamous necklace called The Heart of the Ocean is quite interesting.

The first notable thing about the necklace, as Titanic lovers remember, is that the necklace was one of the most beautiful necklaces designed.

The Heart of the Ocean necklace featured stunning diamond and sapphire gemstones. The necklace was seen mainly in the scene where Kate Winslet, who played Rose, had her portrait painted by Leonardo Di Caprio, who played Jack.

While the necklace looked like a fictional piece created by James Cameron, research now reveals that there was a diamond and sapphire necklace, the Heart of the Ocean necklace, on board that fatal night.

The necklace wasn’t Rose’s, but it was given by a paramour Henry Samuel Forley (40), to a younger girl called Kate Florence Philips (20), with whom he had a secret affair. 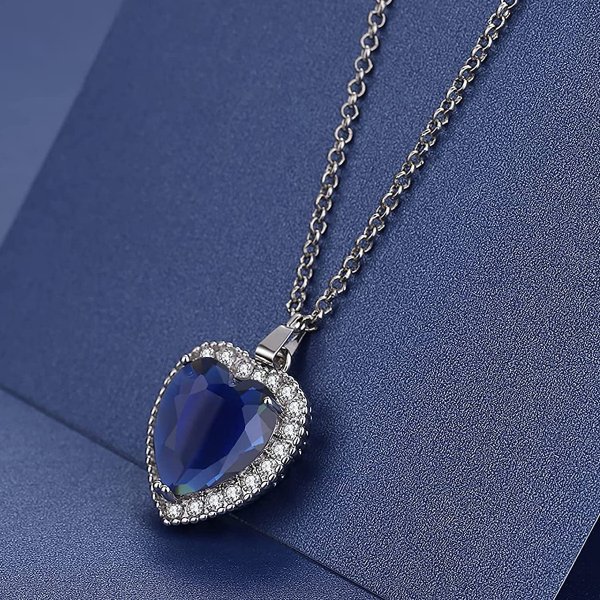 At the time, Kate worked as Morley’s assistant, working at the Purveyors of the High-Class Confectionary shops, and as their love grew stronger, the pair planned to start their life together abroad.

This was a shop that he owned in London. On a fateful night, Kate and Henry were passengers sailing secretly as they hoped to begin their new lives together in America – this also means that they were traveling as second-class passengers, eloping under the guise of Mr. and Mrs. Marshall.

Where did the original necklace come from? 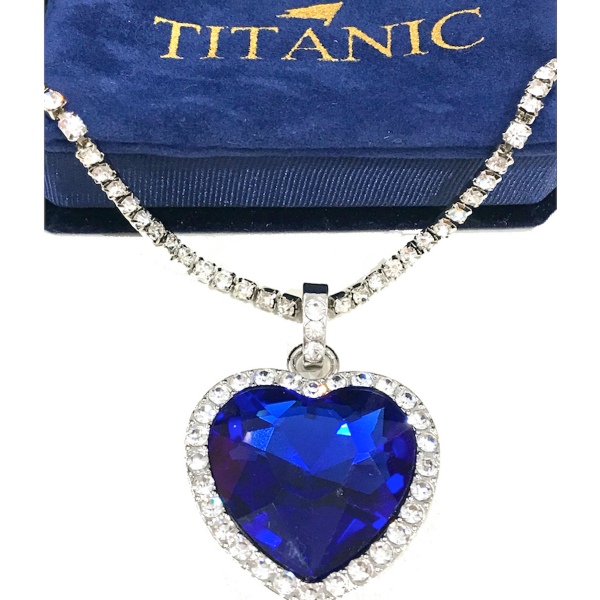 Well, the original diamond-and-sapphire necklace belonging to Henry and Kate belonged to Kate Phillips. Before sailing, Kate had sold his two confectionary shops, and he gave his wife and their 12-year-old daughter the money.

But the necklace he gifted Kate looked a bit different in design and form than the necklace featured in the movie. However, the necklace was just as lovely and expensive as anyone could imagine. 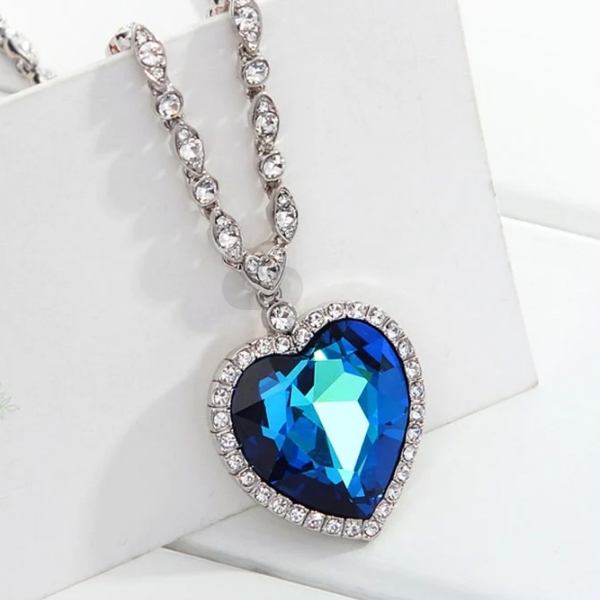 Mr. Morley gifted Kate the necklace to show his love and devotion to his bride – the necklace he gifted was known as the Heart of the Ocean, as a way to show her that he was ready to embark on their new life abroad in America.

However, when the star-crossed Titanic Ocean Liner capsized on 15th April in 1912, Morley was one of the lives lost that night because he couldn’t swim.

Kate got lucky, though, and she got onto Lifeboat 11. where she stayed for 8 hours wearing nothing other than her long nightgown until she was later saved and got a jacket from one of the sailors, it was later revealed that Morley had quickly placed the necklace on Kate’s neck as the couple left the cabin for the lifeboat. 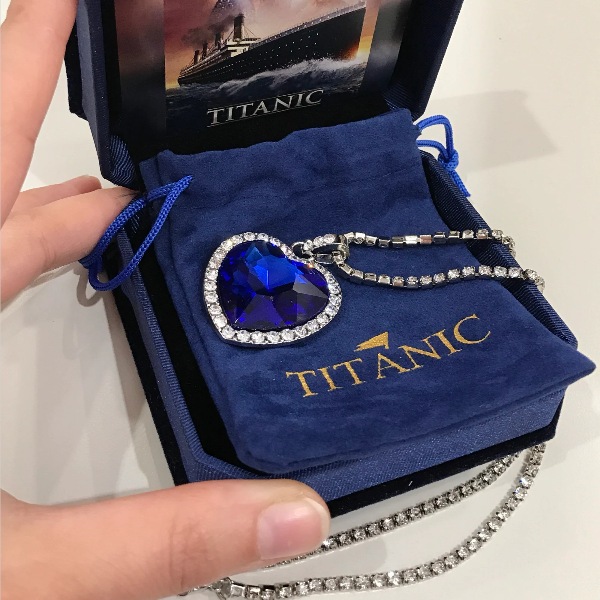 It is further reported that after the rescue, Kate left for New York, where she lived for between 3 and 4 months. There, she lived with a couple that had taken her in, and it was the time that she learned that she was pregnant.

Since the couple didn’t want to take her in with her baby, she was forced to return to England, where she lived with her grandparents in Worcester.

She gave birth to her daughter, Ellen Mary, in January 1913, but given the unfortunate events that her mother had gone through, she didn’t receive much in terms of motherly love, and soon after, Kate left her daughter to be raised with her grandparents. 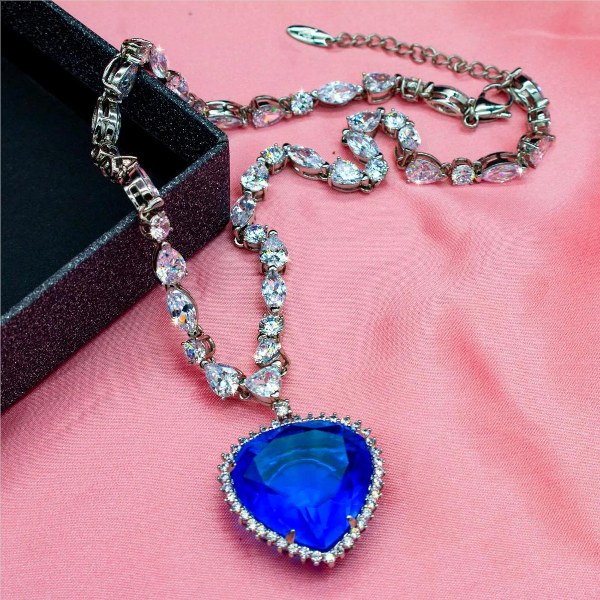 Kate remarried soon after. In many ways, Kate treated her daughter the way Cinderella’s evil stepmother behaved. And despite everything that transpired, she never really talked much about his baby’s father.

So, while the Titanic’s necklace made of diamond and sapphires was roped into the beautiful but fateful love story of the Titanic, it turns out that there is much more to the story. 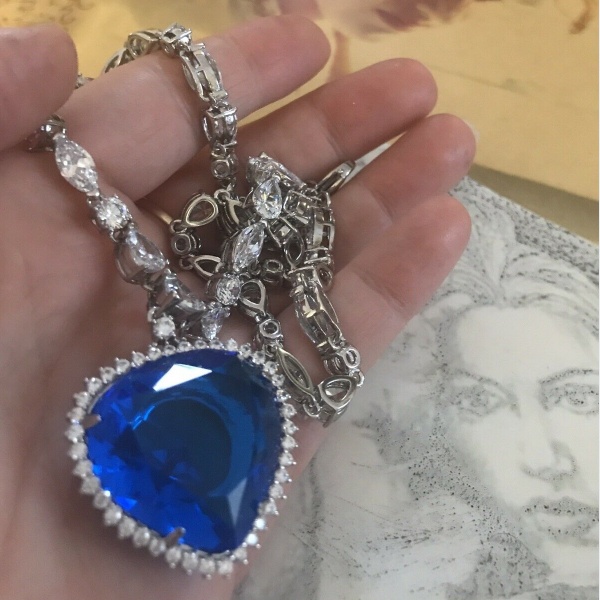 Besides the details regarding to the ownership of the necklace not belonging to Jack and Rose, the other thing that wasn’t true in the initial story would be the fact that The Heart of the Ocean necklace wasn’t actually heart-shaped. However, the story about the gemstones used to make the necklace is similar.

For many years, Kate treasured the necklace, and ultimately, she gave it to Ellen.

How did Ellen come to know about the necklace? 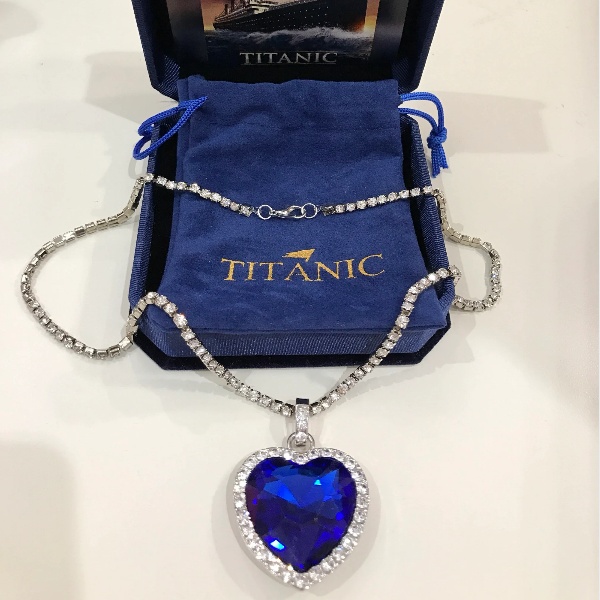 Years later, Ellen Mary learned about everything that had happened, including who her father was. She tried in vain to have her dad’s name added to her birth certificate, but this failed too.

After Ellen inherited the necklace, she, unfortunately, fell into rather hard times – this happened in the 1990s, and she had to sell the Heart of the Ocean necklace to have enough money to get by.

The lady who bought the necklace lived in Florida. Even so, Ellen spent pretty much her entire life trying to prove his dad’s identity. She had kids of her own, with whom she passed down the romantic yet tragic story of her mother and the necklace.

Was the heart of the ocean ever found after the Titanic 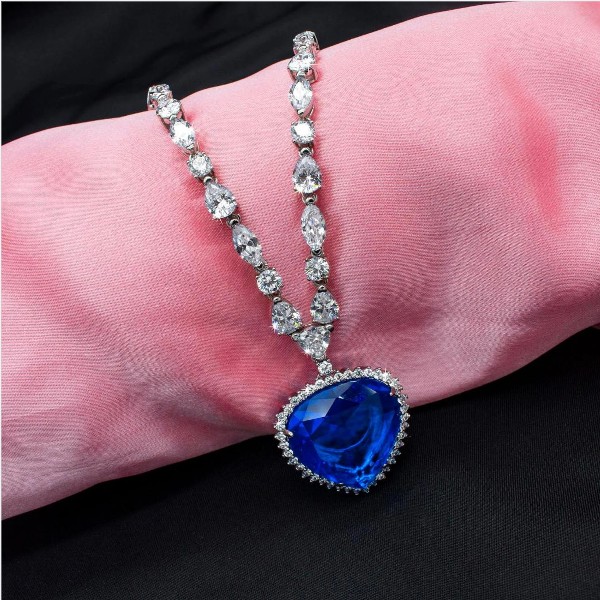 Yes, the real necklace owned by Kate and Morsley was found. Just not the fictional necklace because it wasn’t a real or a valuable necklace.

According to accounts from The Titanic, The Heart of the Ocean necklace came from the crown of Louis XVI, but as we now know, the story is fictional, and the necklace was not lost at sea.

But had the story been real, the necklace would be worth at least $350 million; thanks to its history as well as the fact that the necklace was crafted out of sapphire and diamonds, we cannot ascertain its actual value today. 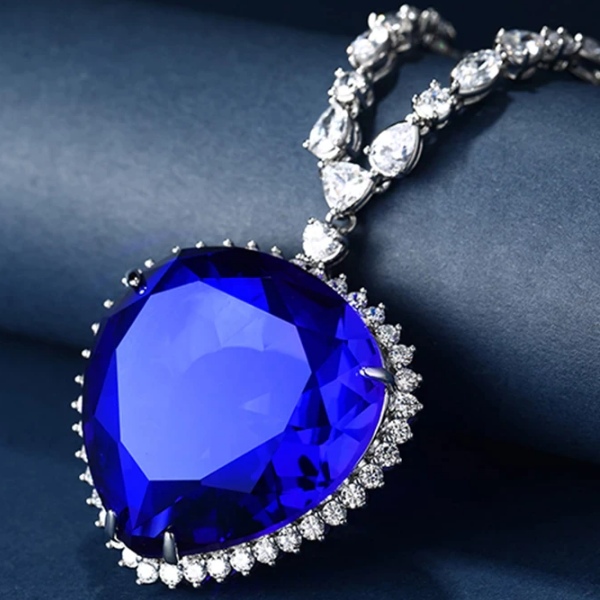 The fictional necklace was made of 56-carat colored diamonds set alongside colorless diamonds.

This fictional piece was inspired by the one-of-a-kind Hope diamond, an actual jewel that wealthy people wore in society, like the royals and socialites.

The blue diamond was a 45.52-carat piece that now sits in the Smithsonian Museum in Washington, DC. This inspirational diamond is regarded as the largest blue diamond worldwide and boasts an interesting story. 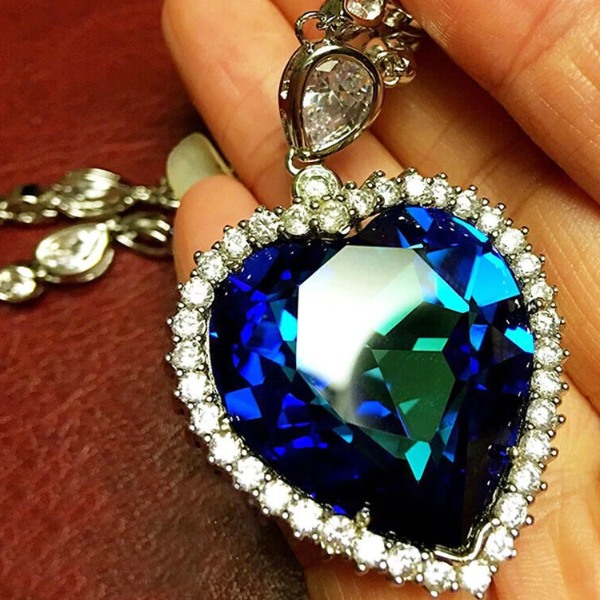 The diamond was mined in India in 1668 and circulated to different parts by the French Nobility, but it was later found in England after it had been stolen.

Today, the Hope Diamond is not really a source of hope, but it’s actually believed to be a cursed item that brings tragedy and misfortune to anyone who wears it.

The Heart of the Ocean necklace is a necklace with different tales, one involving a real gemstone and the other associated with a fictional gem.

But even with the conflicting stories, the necklace is laced with the symbolism of tragedy and romance.

In the Titanic, the Heart and the Ocean necklace was believed to be the symbol of Rose’s heart, and it is inferred that the necklace represents the fact that a woman’s heart is as deep as the ocean (of secrets).

And so, Rose deemed it a way for her to keep the memories of the time they had an affair. So, as an ode to their time together coming to an end, she threw it into the ocean, where its secrets would be guarded forever.