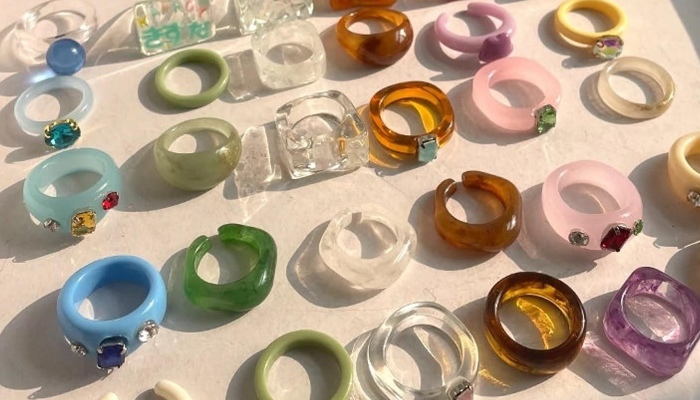 Antique and vintage plastic jewelry boasts a rather interesting history, and this jewelry style stands out quite well, especially for individuals who collect historical jewelry pieces.

But there are different types of vintage plastic jewelry options on the market today, some more valuable than others, depending on their history.

The plastic jewelry options made the best of costume jewelry, which despite being disregarded by several jewelry lovers, the jewelry remains to be an important historical piece. So, which are the common types of vintage plastic jewelry? 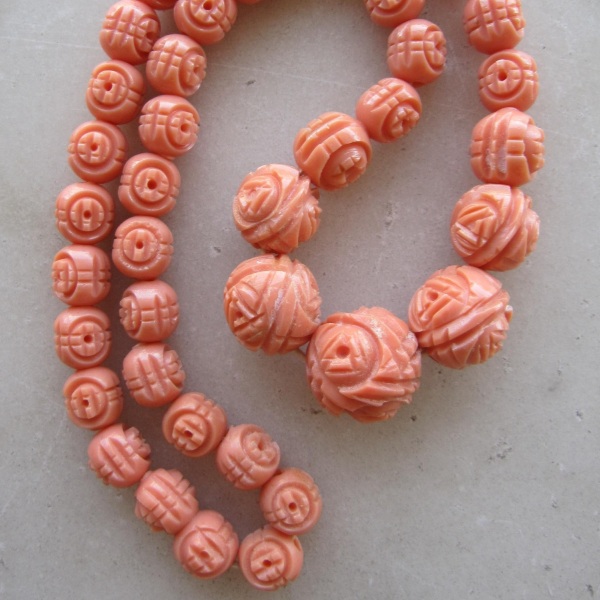 There are various types of vintage plastic jewelry from the early 90s, and most of these pieces can be easily differentiated by the plastics’ response to heat.

Celluloid is one of the oldest forms of plastics created and used in jewelry. It was first developed in the 1840s, but its application in jewelry manufacturing didn’t start then; it started much later in the half-century. 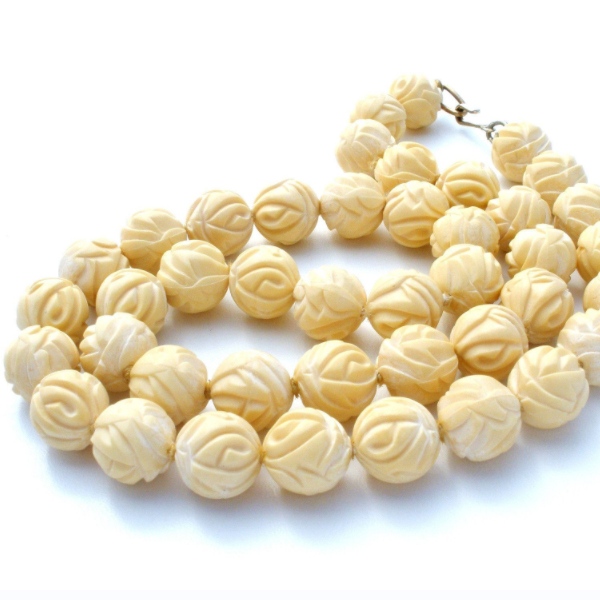 It was created after John Wesley Hyatt opted to patent his camphor and cellulose nitrate concoction and called it Celluloid. Celluloid was at first meant to be used as a replacement for the ivory used in billiard balls, but soon after it was created, it became a popular plastic that was used in different industries and for different applications thanks to the fact that celluloid could be etched, colored, and even made opaque.

There was one caveat, though, this type of celluloid was very flammable. So, in 1920, a less dangerous alternative, cellulose acetate, was discovered.

Celluloid and other cellulose plastics were used for jewelry because they could easily mimic natural substances like bone, amber, and tortoiseshell. 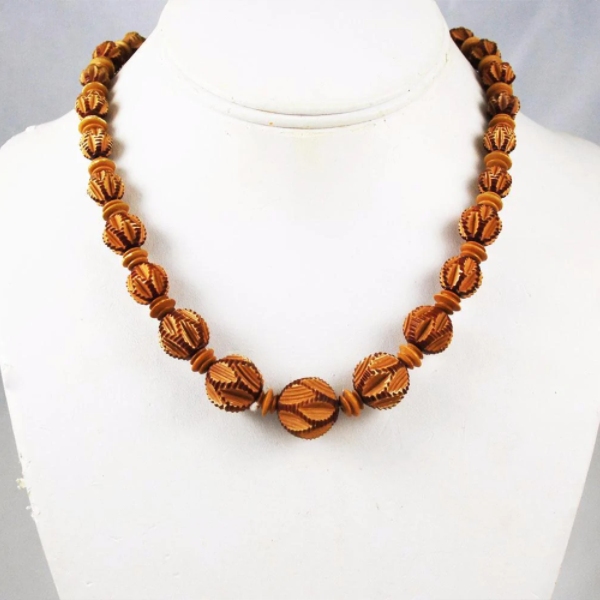 Celluloid is also called French Ivory, and it is made of camphor, which smells like Vicks Vapor Rub or camphor, so when it is heated, it smells like mothballs or pine sap.

An interesting feature of celluloid is the fact that you shouldn’t expose celluloid to alcohol because alcohol dissolves it. Also worth noting is that celluloid is much thinner than other kinds of plastics, and this makes it prone to yellowing and cracking.

Celluloid is often used in hand mirrors, hair receiver jars, and hairpin containers. While this plastic form makes great jewelry options, it is also highly susceptible to high temperatures, and it would get deformed. 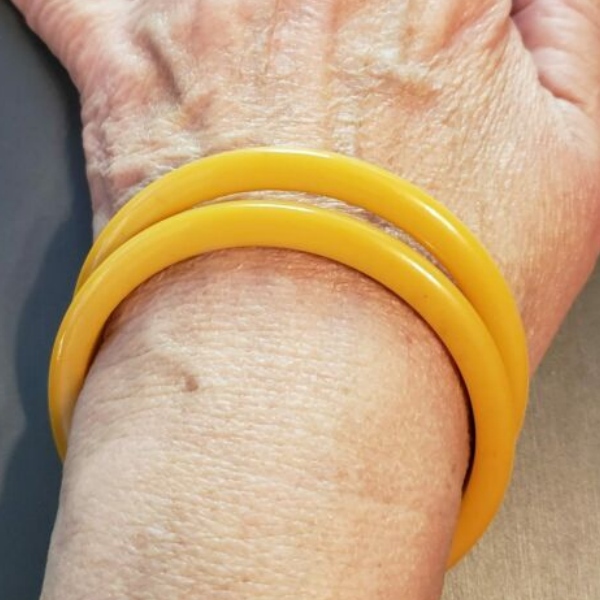 Unlike thermoplastics, bakelite was the most popular form of plastic because once it was hardened, it was impossible to return it to a moldable state, and this type of plastic is called thermoset.

Bakelite was created in 1907 by Leo Hendrick Baekeland, who also patented this plastic form made of phenols and formaldehyde mixed under very high-temperature conditions.

While several other forms of thermoset plastics were made then, Bakelite remained quite popular thanks to its superior durability and the fact that it could be used in multiple applications. 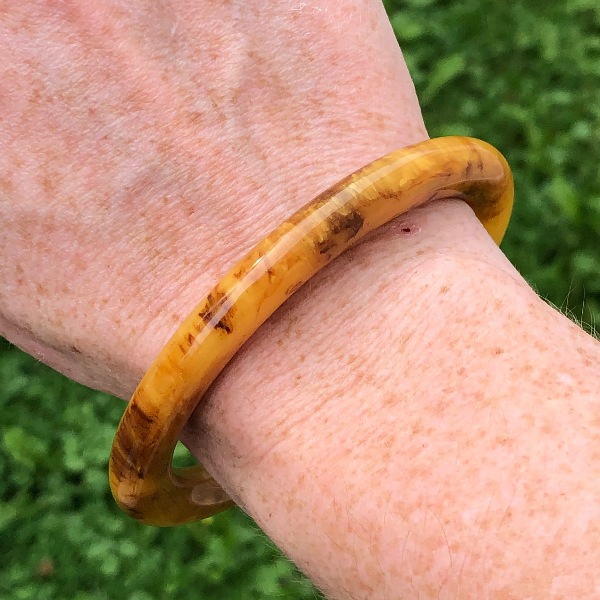 Bakelite was a big part of the Art Deco period, and the earliest forms of this plastic were made in limited color options such as red, blue, brown, green, red, and black.

By the end of the 1920s, however, bakelite was found in many other colors. And thanks to its luster and hardness, bakelite jewelry could easily rival the quality of the semi-precious jewel.

A popular type of bakelite jewelry was the Bakelite pearls which were stunning, and they quickly became a favorite among jewelry lovers thanks to their lightweight qualities and durability of the plastic. 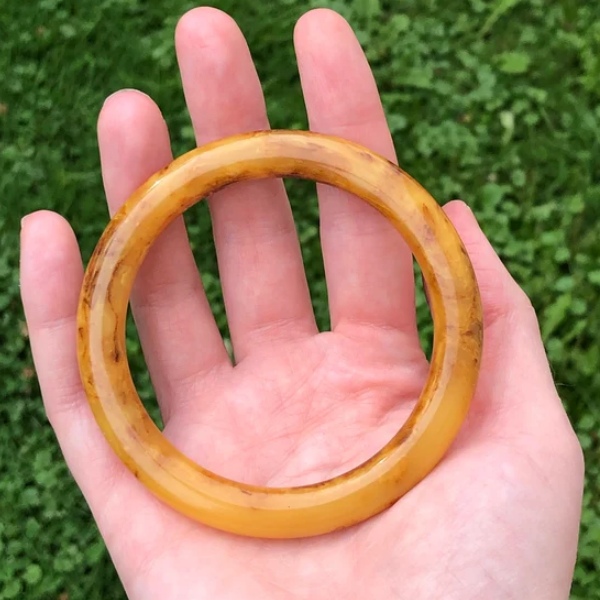 Around the same time, Bakelite was the preferred plastic used by jewelry makers and artists. And today, Bakelite is one of the most coveted forms of plastic preferred by jewelry collectors.

Other than Bakelite, the other common type of thermoset plastic is Catalin, which got its name after Bakelite’s patent expired and was purchased by a company called Catalin. Bakelite is a phenolic plastic. 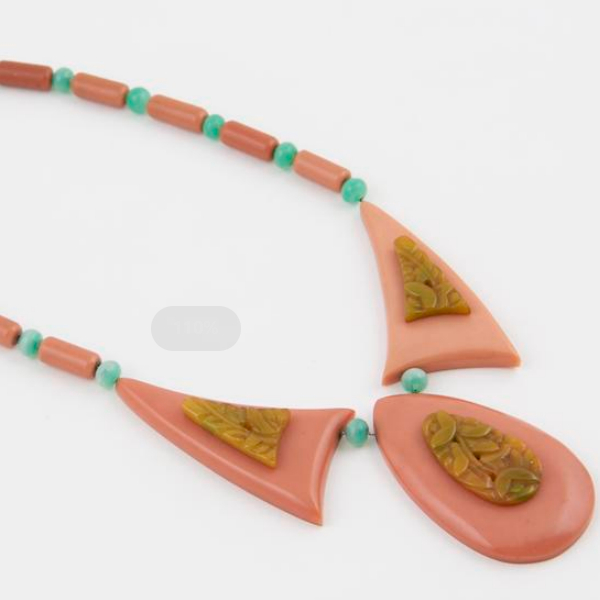 The other popular type of plastic used in vintage plastic jewelry is casein. The first patent for casein plastic was issued in 1897 back in Germany, but it wasn’t until 1919 that it was introduced in the US.

Casein was quite popular because this form of plastic was made from natural casein proteins extracted from milk.

The extracted casein was then mixed with dyes and plasticizers and hardened in a formaldehyde solution. 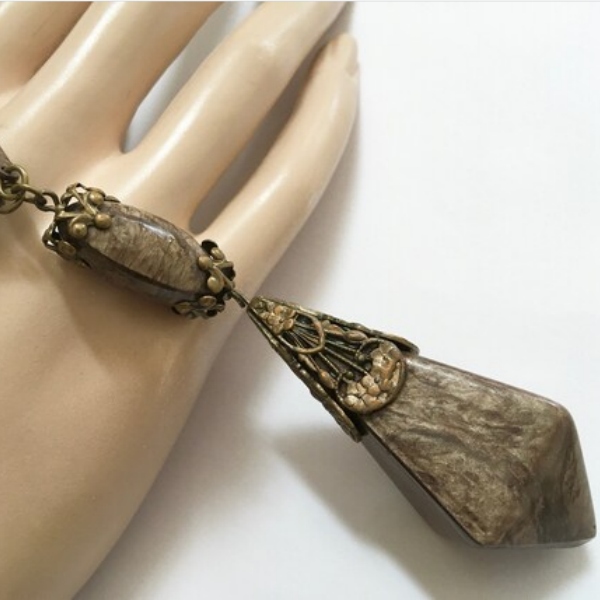 Casein plastic looks and works like celluloid because it was often used when mimicking other natural materials. And today, Casein is a common plastic used in glues and paints.

The other notable thing about casein plastic is that when you heat a piece of jewelry made of casein, it emits a smell similar to cheese or even burnt milk. Casein is also known as Galalith or the French Bakelite. 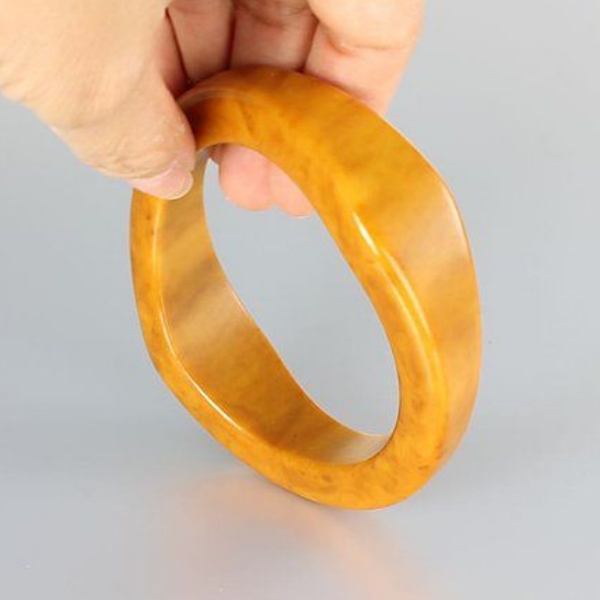 Acrylic plastic is another type used to make jewelry; now, there are few options for antique lucite jewelry on the market. Acrylic plastic was first created in 1901, but it wasn’t until the 1930s that it was first used in jewelry in Germany.

Acrylic gained popularity quickly, becoming a popular choice for many jewelry designers thanks to its crystal clear design and translucency and the fact that acrylic plastic would be molded and colored quite easily.

While acrylic jewelry had been around for years, it wasn’t until 1941 that lucite was created and patented. Lucite was patented by the American costume jeweler Joseph H. Meyer Bros. 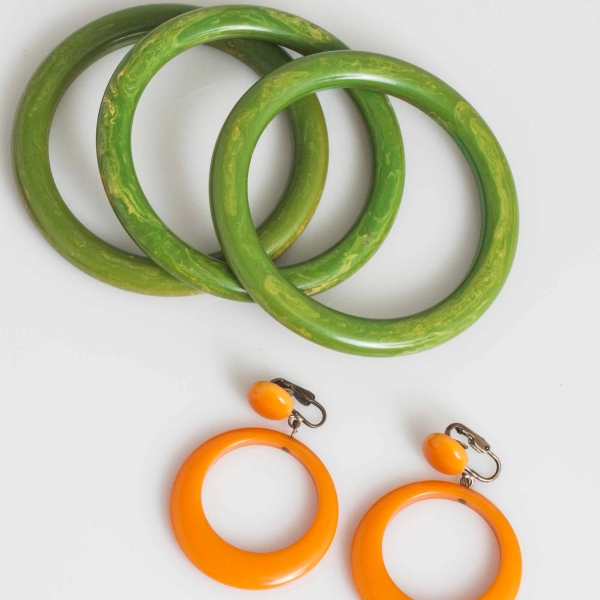 Acrylic plastic and resin jewelry has since been a popular type of acrylic plastic. It’s grown quite popular recently, especially because of its easy accessibility to most amateur jewelry creators.

Also, Lucite is the trademark name given to acrylics by Dupont. It is different from plexiglass, though, which was trademarked by the company called Rohm & Haas. Note that, unlike casein, Acrylic doesn’t produce any smell when it is heated. 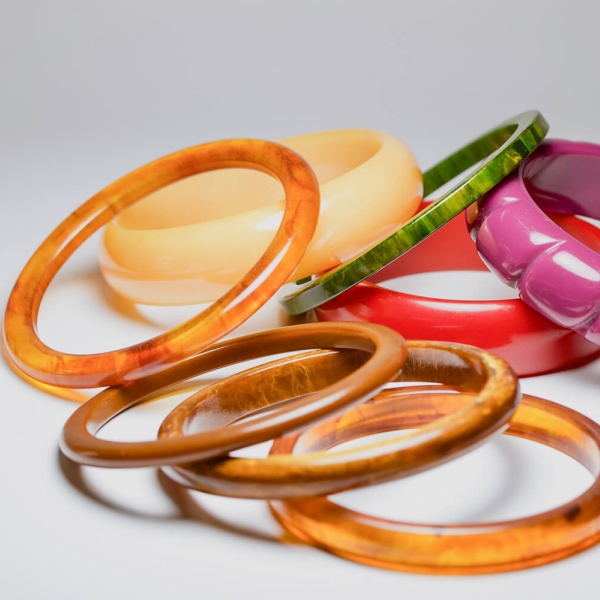 Though it is not a popular type of plastic, Urea plastics, also called Urea-formaldehyde, was first made in 1929, and like Bakelite, it is also a thermoset plastic. They were used to make pearls and other forms of super-lightweight plastic jewelry.

Other types of plastic used in antique jewelry

Polystyrene – this is the same plastic that is often used in the containers that are used for yogurt, and it looks like Styrofoam. This plastic is also highly flammable.

Cellulose Acetate – this is the same kind of plastic that makes buttons.

Most of these plastics are still used today, and the antique pieces are worth something.