Snake-themed jewelry has been on the rise over the past few years, and today, individuals looking for bold jewelry to expresses their level of badass energy, confidence, beliefs or to express a sense of camaraderie would be seen wearing the snake jewelry.

And most importantly, what would it mean if you wore snake jewelry?

What does snake jewelry symbolize?

Well, snakes and serpent jewelry dates back to the ancient worlds and a time when the snake was perceived to be a very important animal and symbol culturally. As noted in the Bible, for example, or in the temples of the Pharaohs in Egypt, the snake was an important symbol that holds this space to date. In the world of medicine, for example, the two snakes that are coiled around the staff symbolize doctors’ offices and hospitals.

Even so, snakes evoke fear among most people, which means that there is a percentage of the population that is completely against snake jewelry. If you are spiritual, however, you are among the persons for the idea of snake jewelry because you of the spiritual beliefs around snakes and the belief that snakes are important animals that have been sent to earth to teach.

Just a quick overview of snakes will reveal why this might be the case. Essentially, snakes have no legs, hands, feet, or arms, but they roam closest to earth compared to all other creatures; they have no ears but use heat for detection.

Of course, we have these parts, but it is believed that we could learn from the snakes how to use our senses and take in our surroundings to let go of or let in energy. And because the snakes shed their skin when growing, they remind us to let go of emotional or physical baggage and setbacks that could be holding us back, something that would help us transform into positive beings and also heal. Also, snake medicine is invoked in surgeries and for healing.

What is the symbolism behind snake jewelry? 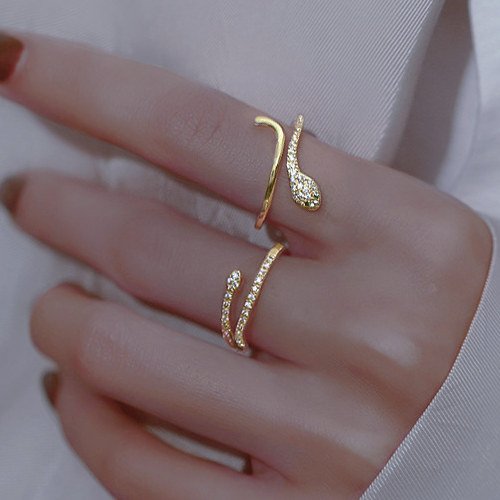 It is believed that when you wear snake jewelry, it brings you closer to your powerful transformation. As we all know, it can be very hard to shed off our old layers of skin, but thanks to the snake jewelry, we are reminded that we actually can and that we must shed off the old skin. In other words, the serpent jewelry is there to teach us all the important things we need to know about purification.

It is also said that wearing snake cuff shows or snake rings where the snake is fully wrapped around the jewelry is a symbol of life in full circle – think of the saying, the circle of life, and how everything has a beginning and an end, as demonstrated by the snakes – head and tail for beginnings and endings.

Ancient Egyptians wore cobras, and many ancient Egyptian temples and even tombs pictured have cobras. This is the case because the cobras were believed to represent the divine and royalty. Wearing the cobra allows the wearer to hone in on their divinity.

And there’s more to this reptile which has led to the reference of the snake as a sacred reptile. In addition to the powers of divinity associated with the snake jewelry, wearing this kind of snake-themed jewelry is also to be meaningful, and it can be worn for fertility. Note that fertility should be interpreted at more than its face value, and having children as we all know it – fertility could also mean birthing new beginnings and new ideas.

Even more interesting is the belief that reptilian is a symbol of sensuality and sexiness, which would mean that wearing a snake ring, snake pendant, or snake cuffs means that you are embodying the Goddess or God inside you that would help you feel sexier. In other words, if you need confidence, boast in your self-esteem, and want to feel sexy, you can wear snake jewelry.

So, what are the cross-cultural beliefs around snake jewelry?

Well, it seems that most cultures hold the symbolism around snakes and snake jewelry close, as can be seen from the very wide variety of elegant snake jewelry. There is pretty much something for everyone, from serpent rings and pendants to serpent cuffs, earrings, and necklaces. And other people also go-ahead to offer brass snake door handles, wall mounts, etc. These options are quite common in Indian, Chinese, and Egyptian cultures.

Some history and story about snake jewelry 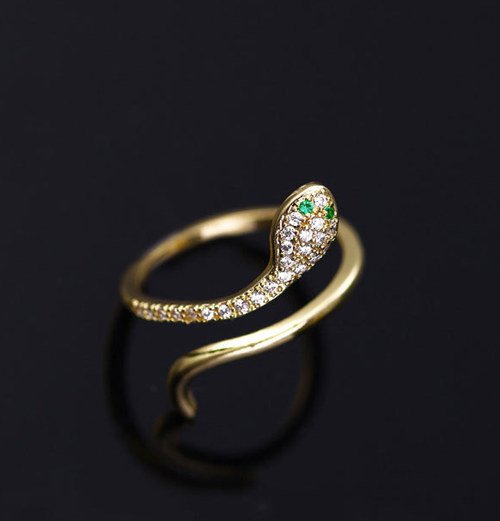 In Genesis (in the Bible), the serpent is said to have slithered into the magnificent and sin-free Garden of Eden, the earthly paradise created by God for Adam and Eve. This snake is said to have slyly tricked the first woman, Eve, into eating the forbidden fruit, the Apple, that was the tree of knowledge. This led to the banishment of Adam and Eve from the Garden of Eden. It was also the start of pain and sin. Now, for most of us, this representation of the snake is what we’ve always known, and it’s pretty much why snakes are feared and regarded as bad creatures.

But then, this is not the only or the earliest account of the snake and what it was known for. In Greek Mythology, for example, Medusa had actual live snakes for her hair, yet, Medusa was a Gorgon woman who had been cursed by Athena for having an affair with Poseidon, the Sea god. This Gorgon woman had the power to turn to scaly stones all the people who looked her way.

The depictions of snakes are not all bad, though.

The Pharaohs of Egypt believed that the snakes represented a higher deity and also royalty, which is why it’s been shown historically that the Ancient Egyptians would adorn themselves in sacred snake pendants on their necks. The Romans also held the snakes in high regard and gave them different interpretations and meanings, the most common ones being symbols of everlasting love and wisdom.

Then you have the Greeks, who considered snakes sacred symbols of wisdom. They also considered the snakes to be symbols of fertility and the goddesses of the moon. In Greek Mythology, their god of medicine, Aesculapius, also stands out, and it said that this god had a snake that was wrapped around this staff, which is a motif the represents the medicine world and the medical professional, to date. 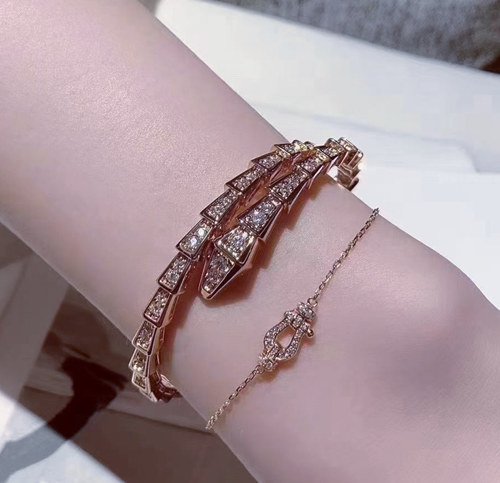 In the Hellenistic Period, the snake was also an important symbol where snake-shaped bracelets carved to look like the snakes climbed up the wrists would be worn to symbolize immortality. This tradition was then scaled down, and the snake jewelry was in the form of small snake ring silhouettes climbing up the finger.

The Hindu also hold the snake jewelry close, as do the Judaic, Asian, and Northern American cultures, all believing that this slinky creature was an important animal that represented something bigger than them.

In the modern world, snake rings came into the fashion scene in 1839 upon their popularization by Queen Victoria, who opted for a snake ring for her engagement ring. This ring featured an emerald birthstone centered on the head of the snake. It is believed that the design of this ring was inspired by the Romans and the belief that the snake was a symbol of Eternal Love. The snake ring design would gain popularity during the late 18th C and early in the 19th Century during the Georgian Times.

There was also the double-snake ring, a design believed to have originated from the Sumerian Period and later in Greek Mythology. Here, the double-headed snake rings were believed to symbolize healing and fertility. Notably, this design for the snake rings lasted into the early Edwardian and Art Nouveau periods.

In 1839, Cleopatra wire the legendary snake necklace that resulted in the most stylish class of jewelry

The next notable snake necklace is the 1968 snake necklace made of platinum with 2473 diamonds mounted on it, as well as emeralds on the underside for a completely reversible necklace design.

The snake necklace is believed to symbolize eternal love, life, and time. 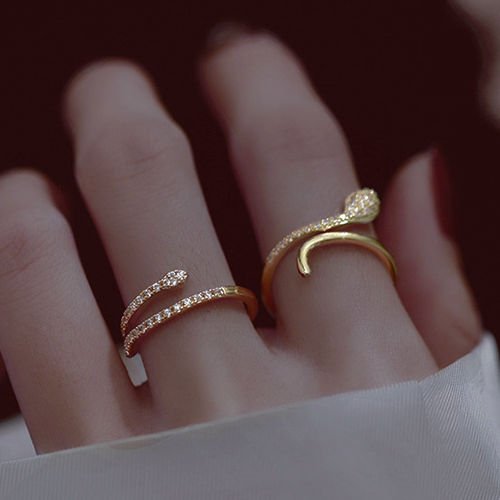 As mentioned above, snake jewelry is believed to be powerful, and it symbolizes different things, including eternal love, protection, strength, and also carries a sensual allure. A snake ring is also said to represent the circle of life. You can read the full post here!  Snake Rings Meaning – What does it Symbolize?

Snake bracelets are also common snake-themed jewelry but not as popular as snake rings or snake necklaces. The snake bracelets became popular in the late 20th Century. Note that the biggest account of a snake bracelet wore in public was the one worn by Elizabeth Taylor during the filming of the movie Cleopatra.

Snake jewelry represents the most iconic and symbolic types of jewelry around, and if you are looking for something unique, meaningful, and maybe even spiritual, snake jewelry would be a good fit for you. Snake jewelry is the perfect kind of statement jewelry.