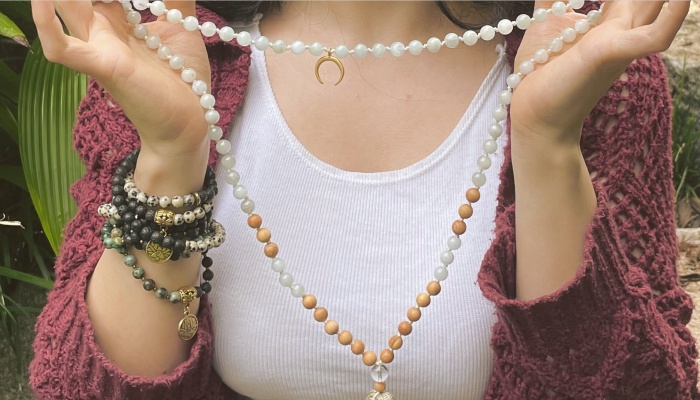 Mala bead bracelets have been used by different civilizations for more than 3000 years. They date back to the ancient Chinese era or even earlier, where the Buddhists and Hinduists used them as a way of praying.

The mala beads have also been used for centuries by these and several other religious systems in different spiritual practices such as yoga and meditation.

But what are they, and what role do the mala beads play? Mala bead necklaces refer to beaded necklaces. The term mala is Sanskrit for the ‘meditation garland’ originally used in a unique meditation style known as Japa, or To Recite.

’ It’s also worth noting that the mala is the string made of 108 beads, with a single larger bead at the head or the summit, meaning the guru.

The head bead is also called the Sumeru. Malas remain an important tool used to enhance the mind’s focus during meditation through count mantras made in sets in 108 repetitions. Mala beads are made of seeds like rosewood and sandalwood, and in other cases, gemstones and crystals, or even wood.

The 109 bead, the head bead, or the guru, is just as important as the rest, and besides serving as the anchor bead, it is also considered a symbol of gratitude. The guru bead also represents the necklace wearer’s connection to the divine spirits.

As a gratitude bead, the guru bead is a simple way of saying thank you, specifically, to spiritual teachers who have helped the believers of this practice on their path to enlightenment.

The significance of the mala beads

1. Mala beads are an important part of Yoga 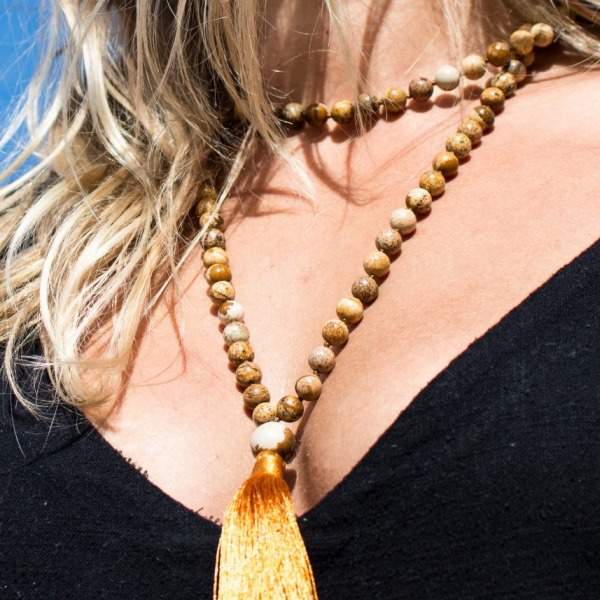 For years, mala beads have been incorporated as a crucial part of the yogic practices, specifically in the 6th and the 7th limbs of the practice of yoga – Dharana or concentration and also dhyana or meditation.

To improve the mental focus during meditation, the wearer holds the counter bead between the fingers, and doing this brings to the wearer an increased level of awareness.

Dharana is important, too, especially during the repetition of mantras. Overall each of the beads helps to free the mind from distractions and outside thoughts.

And so, with practice, your concentration improves gradually through the last 2, 3, and finally, the entire mala necklace. This practice results in a continuous and rather steady concentration level called dhyana. 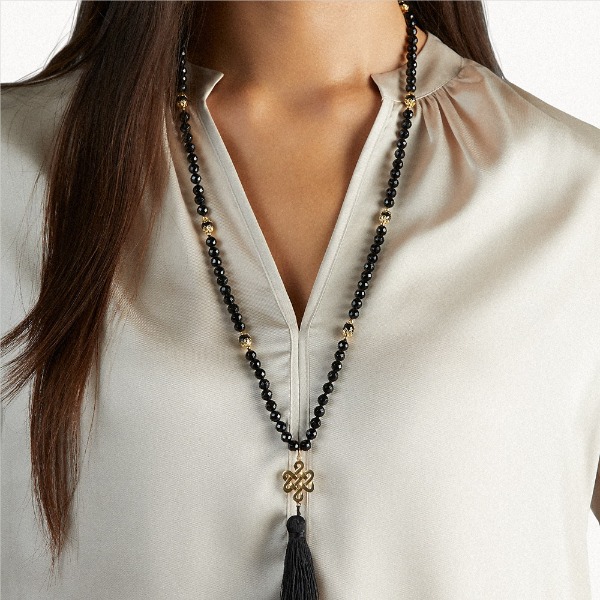 Once you reach dhyana, your mind will be still and quiet, effortlessly. So, if you have been struggling to meditate and to maintain quiet in your mind, mala beads and knowledge of how they work will ensure the best meditation experiences.

It’s also worth noting that during meditation, you’d need to repeat the mantras 108 times softly, and the mala beads allow you to keep track. The most common mantra or repeated word is the word ‘Om,’ and this word helps you to concentrate with ease. 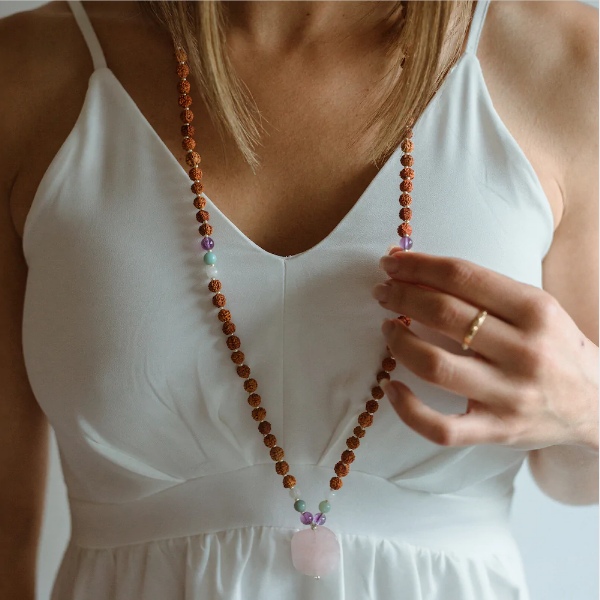 With your mind’s undivided attention directed towards the twisting feeling of the beads and the mantras, your mind is free from wandering, which gives you time to slow down and not to think or overthink, hence stress reduction.

During meditation with the mala beads, your stress and anxiety levels are lowered, hence an overall improvement in the state of your mental health.

The functions and the effectiveness of the mala beads also come from the fact that the beads were commonly used in Ayurvedic practices, also called the Science of Life.

In this belief system, effective meditation, thanks to the use of the mala beads, brings forth a wealth of psychological and neurological benefits. 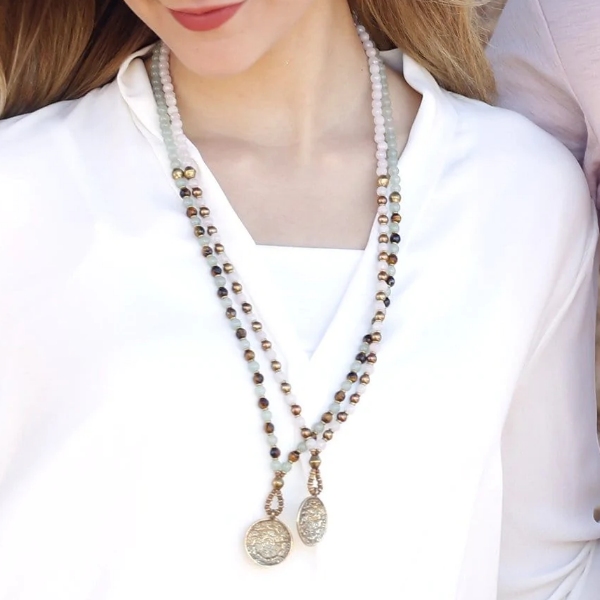 Thanks to meditation and the stillness of your mind when reciting mantras, you will be happy to know that your physical health state will be improved significantly.

Some of the health benefits that come from the use of mala beads include lowered heart rate, blood pressure, as well as cholesterol levels.

And thanks to mindful meditation, you will also enjoy an improved level of blood flow to the brain, hence the best level of function for the body, as well as the regulation of the body’s functions. 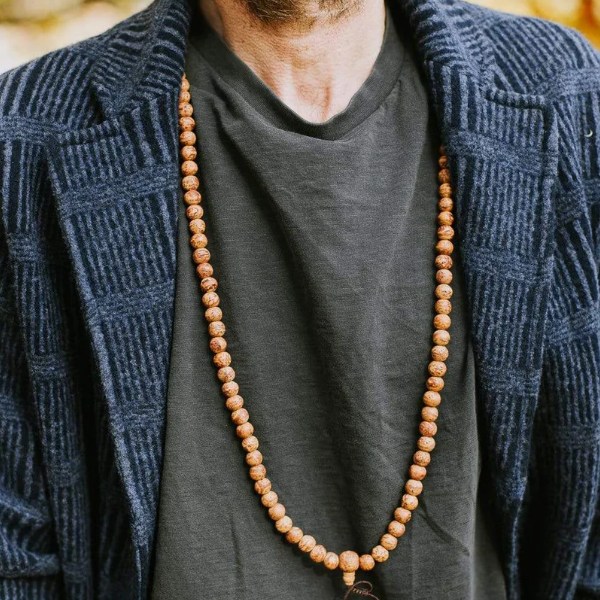 Thanks to meditation with the mala beads, you will enjoy a wealth of cognitive benefits such as improved memory and focus.

The beads and meditation also help to delay the decline of cognitive functions and illnesses like dementia, Parkinson’s disease, and Schizophrenia, among others.

Mindfulness fueled by or coupled with meditation will come with several lasting benefits later in life, enhancing your quality of life and allowing you to lead a more positive journey as you grow into your higher self.

The mantras and counting the mala beads will improve your attention and focus, making you feel much happier.

5. Improved state of health and reduced need for medications 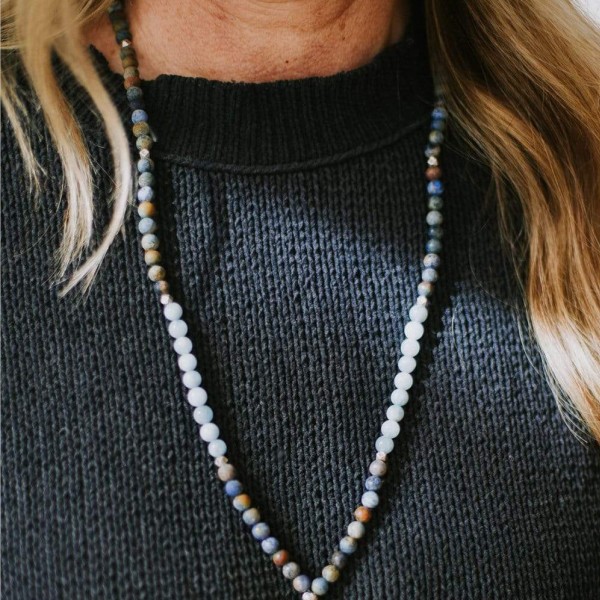 Alternative medicine has, for centuries, been regarded as the best form of medicine for the body and soul. Although we are not talking about acupuncture, yoga and meditation are made possible by the use of the mala beads.

These beads reduce the need for medication as individuals grow older. This is important because, at the end of the day, taking care of one’s mental and physical health is essential to preventing many symptoms that may come from future conditions and ailments. 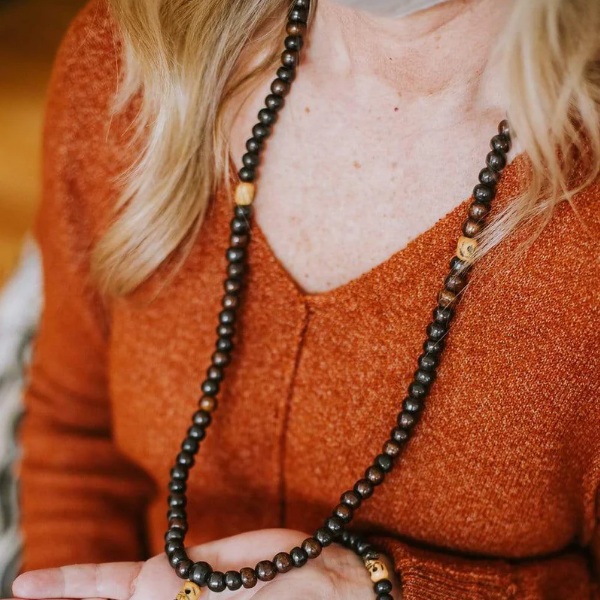 Most of the Sanskrit mantras that work with mala beads are important because they help improve one’s sense of awakening, making you happier and peaceful.

Spiritual awakening is enhanced by the fact that the mala beads are made of 108 beads – the number 108 represents the spiritual journey towards reaching the highest level of spiritual self/ awakening. 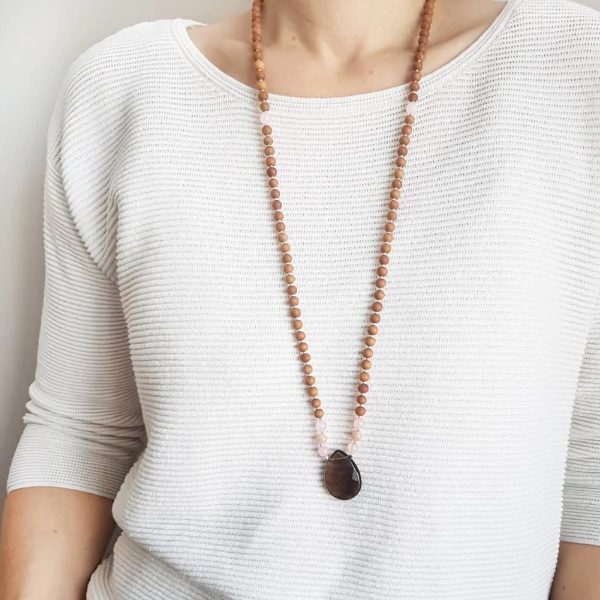 The mala beads are also important because they are believed to carry the power to absorb vibrations from meditation.

If positive, the positive vibrations will be reflected in you.

Mala beads are important meditation tools that enhance your health and welfare while making you feel more spiritually connected.

The effects and powers of the bracelets are tremendous, and you may even feel happier and stronger depending on the crystals or stones it is made of.