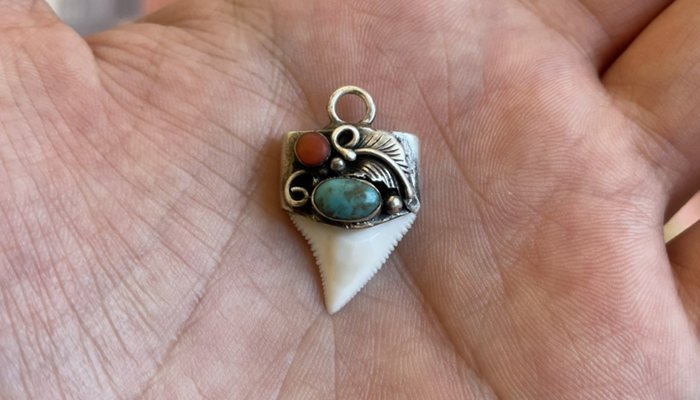 With most people wearing the necklace not just for style but also for superstitious reasons, do you the actual meaning of this necklace?

Keep reading to find out more about the actual meaning of the shark tooth necklaces.

Though used as home décor, jewelry, and many other accessories, shark teeth are believed to hold some spiritual meanings attached to them. Essentially, sharks are said to have about 3,000 teeth, a large number which is attributed to the fact that shark never loses their teeth and their teeth never really run out. However, some of their teeth would come loose from aggressive hunting and eating. When they fall out, the teeth would be found at the bottom of the ocean.

One of the most common gifts given on the island of Hawaii is called Leiomano, which is another name for the shark tooth common in the Polynesian and the native Hawaiian cultures. The reason for the specificity and the popularity of this gift has to do with the fact that the shark teeth are believed to hold powerful protective powers, and a wearer of the shark tooth necklace would protect you from shark attacks while also serving as a great source of strength.

According to Hawaiian spiritual beliefs, the Hawaiians protected themselves using the shark tooth. They also worshipped the sharks, in a way. The reason for this is the belief that some of the sharks are an embodiment of their ancestors, family deities, and gods known as the aumakua, which is why the sharks deserve the utmost amount of respect.

Before we look at the symbolism behind shark tooth necklaces, here is an interesting bit of information – did you know that sharks are classified as elasmobranches, a classification term that was settled on following the fact that the sharks’ skeletons are made from cartilage, which means that the only part of a shark that can be fossilized is their teeth?

Also, the teeth of sharks take up to 10,000 years for them to be fossilized, which is why shark teeth are often found in sand bottoms, or they may be washed ashore. It’s also the reason why the teeth make attractive embellishments – they won’t deteriorate.

So, a shark tooth necklace will last for centuries after you no longer exist. They are also stylish and a nice addition to modern fashion.

But that is not all they are. Shark teeth are quite symbolic, as you will see below.

Protection – shark tooth is one of the first masculine accessories that was adopted by surfers as far back as the 1960s. But it wasn’t until a decade later that the use of shark teeth as accessories because a big thing – this was fuelled by the Steven Spielberg movie Jaws. Soon after, surfers wore the shark tooth because they believed that the tooth protected them whenever they went to the ocean.

According to Hawaiian myths, wearing the shark tooth when going to the ocean is important as it offers protection from shark bites. As a result, wearing a shark tooth necklace wasn’t meant to be decorative but as a protective talisman. The ship used at sea would also be decorated with shark teeth, as it was believed that beyond protection, the tooth would bring good fortune while protecting the seafarers from evil waters. Sailors believed that the tooth protected them from drowning.

Surfers believe that talismans and charms made with shark tooth would bring good luck at sea while also keeping them safe.

Manhood and masculinity – Besides being a symbol of strength and a great charm for protection, a shark tooth necklace is believed to be a symbol of masculinity, and men who these necklaces attract women.

Healing powers – shark teeth, specifically the fossilized shark teeth, are believed to hold powerful healing effects, just like crystals, and the fossils are believed to help you easily transition from the old to new, making you more receptive to new and fresh innovative forces available to you. The tooth is also said to be able to help you in your personal growth journey and the inevitable process of change, even as they allow you to instill excellence and quality in your environment.

Survival Tool – the shark tooth is also more than a fashion accessory/ statement, and it was used by Native Hawaiians as a survival method – called Leiomano, as mentioned above. The tooth would be used as a weapon and also used in food preparation. Interestingly, the teeth would also be passed down to royalty, and the shark tooth necklaces were deemed fit for queens.

Shark tooth necklaces are mostly ethical and wouldn’t be regarded as cruel, but you must be aware of some things about the shark tooth when buying the jewelry.

Essentially, if the necklace you are buying is made of a real shark tooth rather than a fossilized tooth, there is a high likelihood that the tooth was obtained using unethical and cruel means.

This isn’t always the case, but you also need to keep in mind the fact that it’s not every day that you will find shark teeth that came loose at the bottom of the ocean, and even when they are found, they wouldn’t be too many to be used in jewelry production at a commercial level. This means that most of the shark tooth jewelry seen in seaside shops and booths are often and most likely from the sharks that have been killed for their teeth.

The only time when real shark teeth jewelry is considered ethical is if the teeth were found after a deep-sea dive or if a tooth washes up the shore. But because there aren’t many shark teeth washing up ashore, the likelihood of the teeth being ethical is too thin. So, if you are buying shark tooth jewelry on the seaside and the vendors insist that they are cruelty-free, there is a high likelihood that they are lying to you.

Is a shark tooth necklace good?

Well, as long as the teeth weren’t obtained through unethical and cruel means, the shark tooth necklace is a great purchase.

It makes a great accessory if you are going for a beach-style or a Bohemian fashion style/ statement.

Also, it would be safe to say that the shark tooth necklace is only a good option is it’s not obtained through cruel means.

Why are Shark Tooth Necklaces so Popular?

The main reasons why the shark tooth necklaces are quite popular are as follows:

So, if you were considering a shark tooth necklace and weren’t sure about its symbolism and whether it stands with your values or not, this article shares all the important information you need to know about these popular and very stylish Bohemian necklaces.