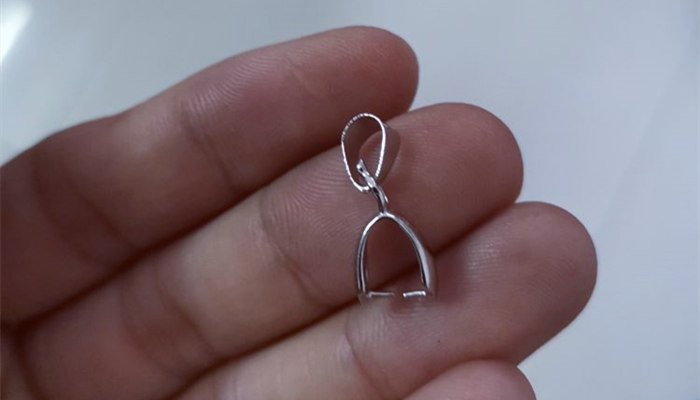 Pendants are timeless pieces of jewelry that you can use to make a statement and customize to your unique taste. In as much as you may love pendants, you may overlook one of the most important pieces that make the pendant. That is the bail; without it, it would be difficult to put on the pedant. Not only do they determine the placement and stability of the pendant, but they also add to the appeal of its design at times.

So, what happens when the bail is too small or not the right size? How do you fix that? You have come to the right place for answers. In this post, we will cover the reasons why bails end up being too small and tips on what you can do to fix that.

Some Reasons Your Pendant Bail Too Small for Chain.

Ideally, chains are supposed to pass through the bail easily. The pendant, once attached to the chain should also be able to move along the chain effortlessly. When this is not the case, then we talk about the bail being too small. There are some reasons as to why this would occur. The following are some of the common reasons:

1.The design of the bail. Sometimes the mistake may have been made during the designing and making of the bale.

When you decide to eye-ball the width of the bail’s opening, you might end up making it too small.

That way no chain will be able to go through and you won’t be able to attach the pendant to a chain.

As such, while making a bail, you must consider the size of chains you expect to go through the bail, so you can size the opening accordingly.

2.The thickness of the chain.

As you know, chains come in many varieties. Some are longer and those are thicker than others.

When picking a chain for your pendant you must consider the size of the bail’s opening.

Otherwise, if the chain is too thick then the bail will be too small to pass the chain through it.

3.Weight of the pendant.

The weight of the pendant may also lead to a bail being considered too small. 4.The ring connecting to the clasp.

Sometimes the chain may be the right thickness for the pendant and bail, but the issue may lie in the clasp of the chain. If the clasp or ring that connects the clasp to the chain is too big, it will be difficult to pass the chain through the bail.

These are said to be smaller bails found in light pendants that are often used on bracelets.

Some people, however, prefer adding multiple charms on a chain, to form a charm necklace.

It can be difficult to pass a chain through the charms given how small the bail is.

What To Do If Your Pendant Bail Too Small for Chain?

Just because your bail is too small to fit your chain, doesn’t mean that you should do away with your pendant. There are several solutions you can apply to fix the problem. Here we will share with you a list of suggestions you can consider to help solve the issue of your bail being too small for your chain:

1.Get a different chain.

If the chain is too thick for the bail, then the simplest solution would be to get a thinner chain that can be able to pass through the bail.

This is the perfect solution of the pendant is light and won’t place too much weight on the chain.

At least that way, you wouldn’t have to alter anything and you can avoid risking any damage to the pendant. 2.Increase the size of the bail.

If the pendant is a heavy one, however, then it will need a thick chain, meaning using a thinner chain would not be the best solution.

In such as case, you will be forced to alter the bail size. This can easily be done by applying heat to the bail. The heat makes it easier to mold and shape the bail to the right size.

You can also expand it by adding metal. If the bail has been embellished with stones, however, especially heat-sensitive stones like tanzanite, then a laser welding machine may be a better option.

Laser welders are used to making delicate adjustments to narrow parts of jewelry, so you can be sure that the stones won’t be damaged in the process of fixing the bail.

If you do not want to expand the bail, then the next best solution is to replace it.

Although most bails are seen to be a part of the pendant, they are simply an attachment soldered to it.

You can therefore cut off the existing bail and replace it with a more appropriately sized bail based on the thickness of the necklace you would like to use.

4.Getting a jump ring. Another easy solution is to get a jump ring and use it to link the bail to the chain.

All you need is a pair of pliers to open up the jump ring, link it through the bail and chain and close it again using the pliers.

This also ensures that you don’t have to alter your pendant. The downside, however, is that the pendant will be fixed to one point of the chain.

If you are okay with that, then it shouldn’t be a problem.

5.Cut off the ring connecting to the clasp.

If the clasp is the sole reason why the bail is too small for the chain, then you can always cut the ring. After passing the chain through, you can solder the clasp and ring back to the chain.

The upside to this is once the pendant has been attached to the chain, you do not have to worry about the pendant falling off the chain, even when you take it off.

As we have already mentioned, bails are an important part of a pendant, therefore, if it has a problem it needs to be fixed. Luckily fixing it is not impossible.

If you can’t do it yourself, you can always have a local jeweler you trust to do it for you.

So, if you have a pendant, you love but have not been able to wear because of this reason, you no longer have to keep it in your jewelry box.