Weddings are a delightful way to celebrate the love between two people. In as much so, the whole idea of weddings comes with several norms and traditions that differ across cultures and societies worldwide.

No two cultures are ever similar, but one common practice that you will find in every culture and society is- the exchange of rings between two lovers that seals their union. 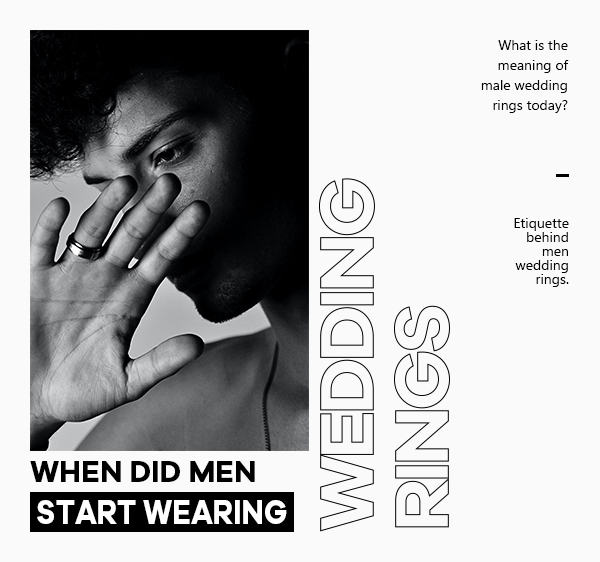 As far as history is concerned, there was a time when women were the only ones who would wear wedding rings during the ceremony.

Today, things are different. Men, too, wear wedding rings to affirm their status of marriage.

Reading this, the question that would come to mind is, ‘When did men start wearing wedding rings?’

Read on to find out!

Rings have been in existence for the longest time. In as much so, men always wore rings on their fingers for several other purposes aside from marriage. Throughout the centuries, men wore rings to adorn and commemorate significant milestones and contracts. They also wore rings to signify their status, wealth, and power.

During the golden age of ancient Egypt, from around 1600 BC to 1100BC, Pharaohs and other men with high status wore signet rings on their right hand.

The ornamental rings were symbols of their social status, authoritative positions, and power in society. People in the lower classes wore rings made of bones and other cheap materials to adorn themselves. At this time, there were no rings exchanged during weddings.

When Rome was founded in 753 BC, Roman emperors would bestow gold rings on distinguished soldiers. Romans from wealthy families would wear bands of gold, while lesser citizens wore rings made from silver for adornment purposes.

Slaves, on the other hand, wore iron bands. At this time, women were the only ones who wore wedding bands. The wedding bands were made from iron, and they were referred to as ‘betrothal’ rings. The ring is intended to signify the transfer of the woman from her family to her husband.

From 300 AD onwards, different people began to embrace wedding bands. Christians in European countries embraced the Roman pagan tradition of giving the bride a ring during her wedding ceremony. However, Christian men did not wear any ring at the ceremony.

During the reign of Pope Boniface IV in 610 AD, men of the Episcopal authority wore rings to signify their betrothal to the church. The rings at this time were made from gold and set with delightful gemstones. With time, Vikings began to thrive in 796 to around 1066 AD.

At this time, both Viking men and women exchanged wedding rings after a few hits of the sword, but European and Christian men barely joined the practice.

In the 19th century, ecclesiastical rings became popular and signified extravagance. Clergymen wore multiple rings to show their authoritative position in the church and their wealthy status.

Signet rings were also used by those from royal families and the rich. The practice of wearing remained with women at this time.

In today’s culture, the groom wearing a ring is as important as the bride wearing one as part of their marriage ceremony and their married life together.

A wedding ring is not only a marriage token but has multiple roles in the lives of the married couple.

At the time of marriage, a ring symbolizes the relationship between the man and woman as they join to become husband and wife.

It also represents endless love. When the couple wears their wedding rings, they outrightly claim their marriage status and send a message that they are ‘off the market’ and cannot participate in any dating relationships therein.

When white weddings became a norm, men would give their chosen brides a ring to signify their husband-wife relationship.

However, the woman wouldn’t do the same. The practice of men wearing wedding rings given to them by their bride dates back to the 20th century and is a new concept to the wedding tradition.

The tradition began during World Wars I and II when male soldiers felt the need to wear wedding rings to remember their wives and marriage union.

As much so, it wasn’t so popular then. Once Germany surrendered and the war ended, men soldiers, and non-combatants took on the sentimental value that wedding rings have.

Ever since then, the exchange of wedding rings between a man and woman became the universal symbol of marriage.

Traditionally, men wore plain metal bands because of the handy nature of work at the time, but this has changed over time. Men wear different types of rings beyond gold and silver and settle for more durable choices such as tungsten, stainless steel, and titanium.

Rings are also crucial in the deterrence of issues of infidelity. Sometimes, when a man doesn’t wear their wedding ring, it raises a few questions concerning infidelity.

Sometimes, they are said to have forgotten the sentimental value of their marriage token.

In today’s world, men are less concerned about whether they must wear a wedding ring than how they should do so in the right manner. Overall, a ring should be worn on the ring finger.

What is the meaning of male wedding rings today?

Universally, all married persons wear their ring on the ring finger. As much so, the hand it is worn varies depending on one’s culture and tradition.

In most cultures, couples wear their wedding ring on the right hand, as a symbol of the vows of matrimony. Also, it is worn, as a promise to uphold any requirements of the oath.

The reason behind this is that the right hand is universally used for oaths, and in this case, marriage is an oath.

Whichever the hand, the wedding ring is a symbol of unending love between two people. It carries a sentimental value and is a sign of fidelity between people. It shows commitment and honor towards each other.

Just like a circle, a ring has no beginning or end and is a symbol of infinity. It is eternal and endless, just the way love and commitment should be.

They are a great way to show commitment to your significant other. It is necessary to wear your wedding ring daily.

Seeing the ring on your finger daily plays a huge role in reminding you how much your partner means to you and serves as a constant reminder of your vows at the altar.

Overall, a ring is simply a way to publicize your betrothal to your partner, so you may want to have it on at all times so that the world can know what’s up!