Although science has changed the way we live and the things we believe in, there are several individuals who still believe in superstition rather strongly, and for these individuals, there isn’t much that you can do to change who they are and what they believe in.

Today, we explore the world of diamond rings and what it means to lose a diamond(s) from your diamond ring.

What does it mean when a diamond falls out of a ring?

If you are not superstitious and don’t believe in luck, magic, and such things, losing a diamond from a diamond engagement ring would mean just that – an accidental loss of an important part of your engagement ring. However, if you are superstitious, losing the diamond would mean something else entirely. Before we take a look at some of the superstitious beliefs about diamonds, it’s worth noting that the use of diamonds in and for engagement rings dates back to the 15th Century when Archduke Maximilian gave his fiance, Mary of Burgundy, a diamond engagement ring. At the time, the gem was quite rare, and to date, it’s become customary for the stone to be used in pretty much most, if not all, modern engagement rings. The diamond is believed to conjure images of timeless romance and rock-solid commitment in relationships.

For superstitious people, it is believed that the diamonds represent the splinters of the fallen stars and, for others, the tears of the gods. With these in mind, the diamonds were often worn by the Ancient Romans, who wore the diamonds as amulets during battle/ war as they were believed to be a source of courage and strength. So, for an extra layer of invincibility, the Roman Royalty would have diamond-bedecked breastplates right beneath their armor.

The gemstone was also believed to have the power to ward off night demons and evil spirits. At the same time, the diamonds were believed to boost the potency of the wearer, especially on the left side of the body.

The Ancient Hindus also held the diamonds in high regard, believing that the gemstone was formed as a result of lightning striking on rocks, and the result was that the formed diamonds possessed immense power to prevent the lightning strikes from reaching the ground. Hindu rituals would also be performed to protect homes.

With these in mind, the loss of a diamond from the ring, for example, would mean that the protection it’s supposed to offer was lost.

Keep in mind that the legends about the diamonds are centered on three main areas of life – love, health, and knowledge. In the case of marriages and engagements, for example, the loss of the diamond would mean loss of love or something on the same line,

Is it common for diamonds to fall out of rings? Remember that accidents happen, and the ring may fall out at any time, especially if you are always using your hands to get things done, whether doing the dishes or gardening.

The other reasons why the diamond would come loose include:

Is Losing Your Diamond A Bad Omen? Most of the time, the individuals who are superstitious believe that the loss of your wedding ring or engagement ring is a sign that the lovers are parting ways or that the relationship is on a rocky patch.

Bear in mind that diamonds are considered the symbol of affection, and they represent a certainty and the security around committed relationships.

Besides the loss of the diamond, losing your engagement ring is believed to symbolize a foreboding problem or misfortune. So, it is recommended that if you think the unimaginable is happening, you could avoid such bad omens by replacing the engagement rings as soon as you can.

If you don’t believe in superstitions, then this will not be an issue for you, and you can just replace the ring or diamond as soon as you can.

Dream about losing stone out of the ring – what does it mean? Did you have a bad ring about losing the stone on your engagement ring, and you’re now freaking out because you think it could be a bad omen? Well, here is what you should know about having a dream that involves you losing the stone from your ring – the dream of losing diamonds from your stone is a symbol of growth, potential for acceptance, freeness, and inspiration. It may also be a reference to the expression of your anger, albeit in a playful manner that doesn’t acknowledge the wearer’s true feelings.

The loss in your dream could also point to some big lie or a form of deception, and that you should invest more effort in what you do for success.

The stone dream could also mean the loss of control over your emotions, especially if you are one to leave things to fate or chance. It could also mean that you aren’t acknowledging some of the important aspects of your life. You could also be in denial about a problem or a situation.

What to do if you lose a diamond from a ring?

In case you lose a diamond from your ring, the first thing you’d want to do is to see if you can still spot the stone, and if you find it, you should keep it safe then take it to your local jeweler.

The good news is that if the ring isn’t dinged in other places, the stone can be reaffixed to the ring with ease. With insurance, the stone/ ring could be replaced easily and the replacement cost covered. 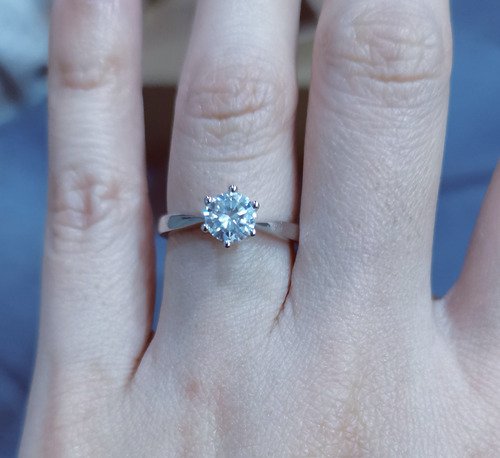 The other superstitious beliefs around wedding rings are as follows:

If you are not superstitious, the loss of a diamond is just that, a loss. But if you are, it may mean more to you, and you’d want to take the necessary actions necessary, like working on the relationship early on.