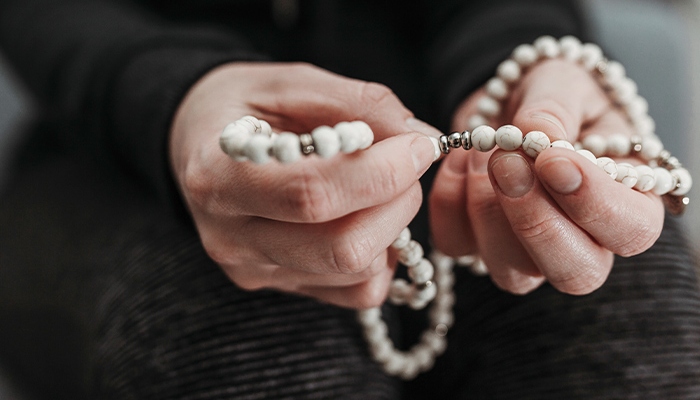 Who can wear mala beads? Are there people who cannot wear the mala beads?

And is it disrespectful when some people wear these beads?

It is possible that anyone can wear the mala beads, as long as they mean well.

Before we look at the logistics and the technicalities of everything to do with mala beads, let’s look at all the basic elements of mala beads.

About the mala beads 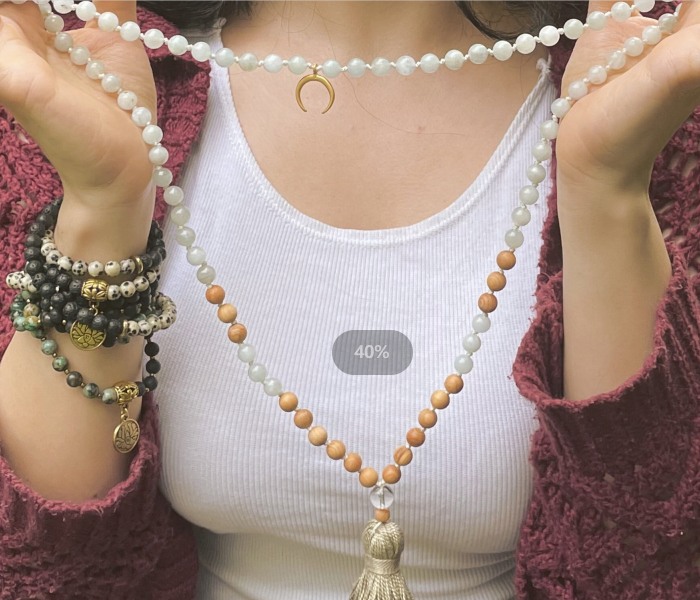 Mala beads, also called Japa Malas or yoga beads, refer to the necklaces made of 108 mala or prayer beads crafted out of seeds or colored crystal, depending on their intended meaning and symbolism.

Note that Mala is a Sanskrit word for garlands, and these beads are important because they improve the user’s spiritual practice and are used mainly in yoga and meditation.

In many ways, mala beads are like the rosary. For the malas, each bead represents a mantra rather than a prayer,  and they are meant to enhance concentration and focus for the person using it. 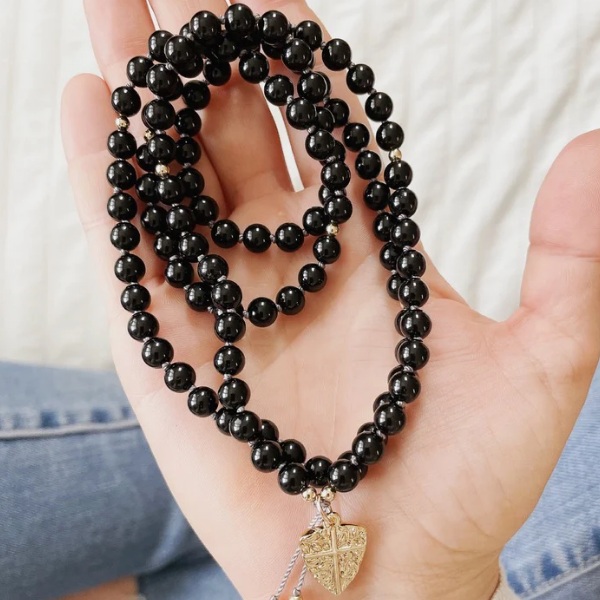 The mala bead necklaces and bracelets are also often used as decorations and jewelry, and they also hold a great deal of power and are of great significance to the wearer, depending on where they found their mala beads, the stones they settle for, and also the energy resonance of each of the beads.

As mentioned above, mala beads are made of 108 beads, and these beads are strung together using one guru beads that is larger than the rest of the beads.

The guru bead is largely regarded as a place marker for your fingers and how they feel both at the start and the end of the necklace when you are meditating or chanting mantras. 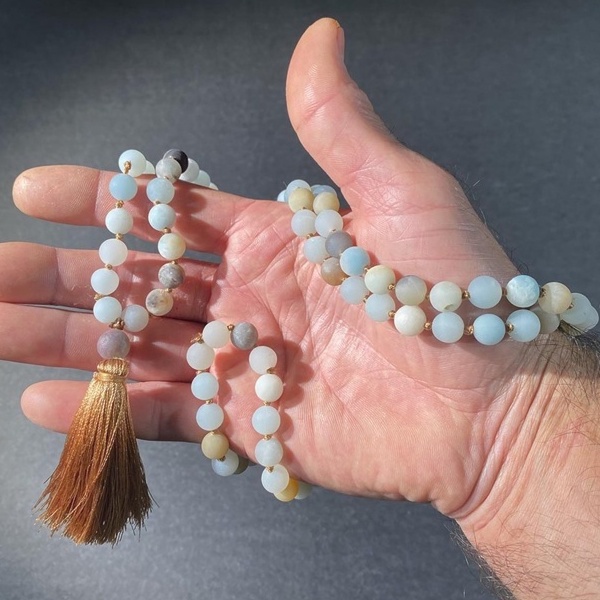 For tracking of mantras, the mala beads have a differently shaped bead that allows for easy tracking of your mantras – this bead is found after each 27th.

It is also the reason why the mala beads for necklaces and bracelets often contain 54 and 27 beads, respectively. Today, mala beads are made of different materials like seeds, crystals, pearls, stones, and wood.

Can you wear mala beads around your neck? 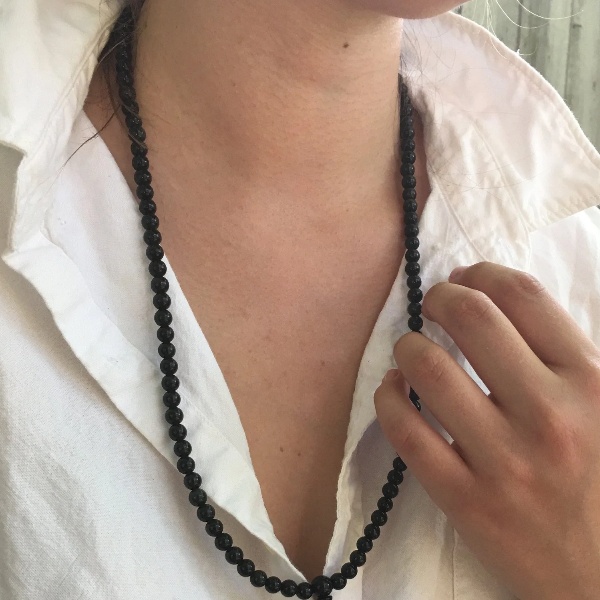 Yes, you could wear your mala beads around the neck. If anything, wearing the mala around the neck is the most comfortable and convenient way to wear malas.

It is also why the mala beads form one of the most functional types of jewelry. The beads are not only suitable for reciting mantras, but they are also quite fun to wear. 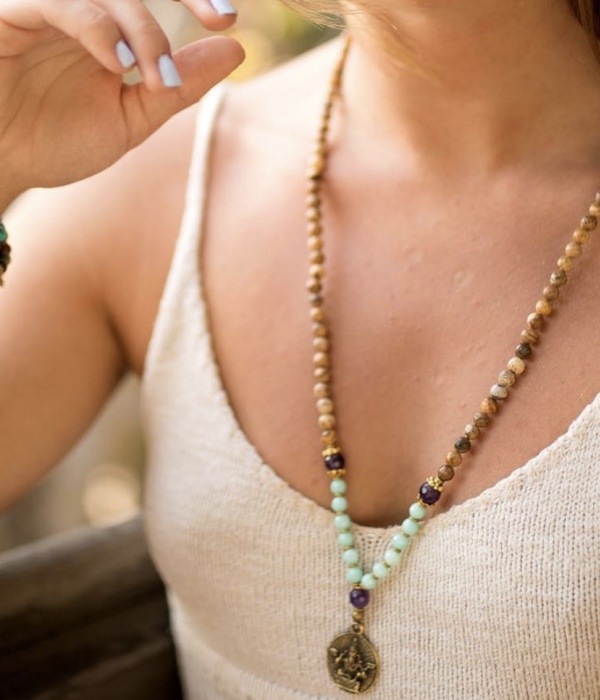 On the neck, your mala beads allow you the maximum benefits of the mala beads in the form of crystals and stones that carry positive or relevant energies to energize your chakras.

With these in mind, you could layer multiple pieces of gemstone necklaces alongside the mala for you to channel all the metaphysical properties/ energies from the mala and the crystals, both for your own benefits/ personal intentions and also for you to enjoy the natural beauty of these very fashionable accessories. You could also wrap the mala around your wrist as a bracelet.

Is it disrespectful to wear Mala beads? 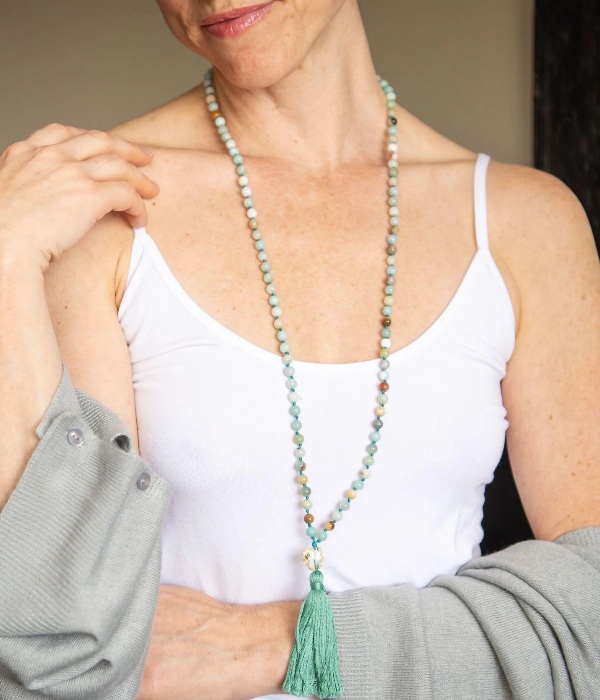 It isn’t disrespectful to wear the mala beads, and it is not taboo for anyone to wear them, as long as you have positive intentions and for the intended purpose. 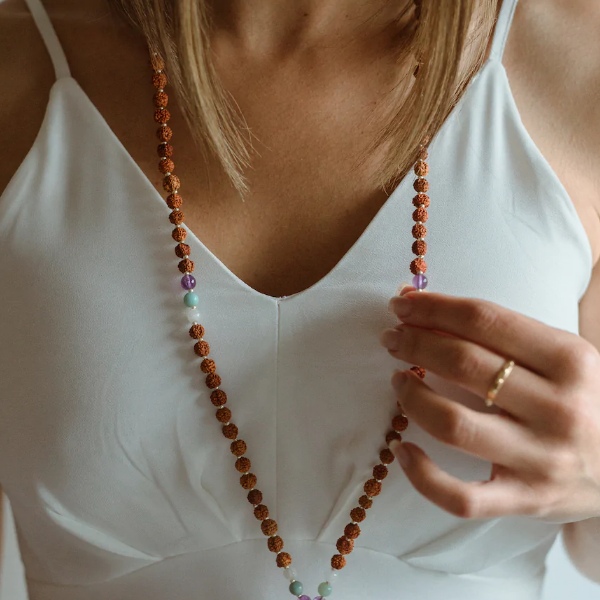 When you wear the beaded necklace to appreciate a religion, connect to a higher being, meditate, and seek peace, you are not being disrespectful in any way.

You need to remember that the mala or yoga beads are a time-honored tool that takes mediation and yoga practices to the next level.

So, if you are always using the mala beads to remain mindful during yoga or meditation, and you are incorporating the beads in a way that honors and respects the practices, making them your personal practices, then there is nothing disrespectful about wearing them the mala beads. 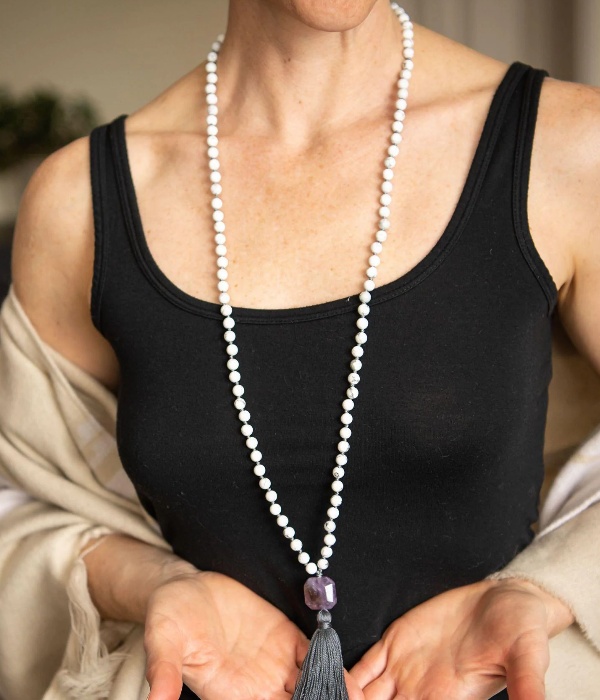 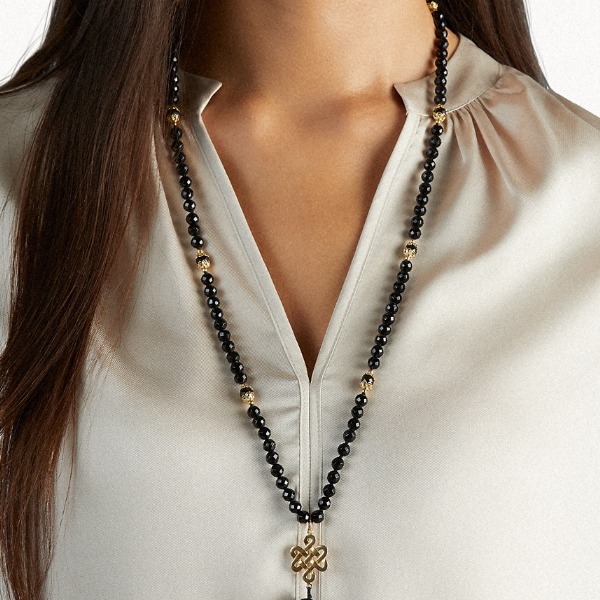 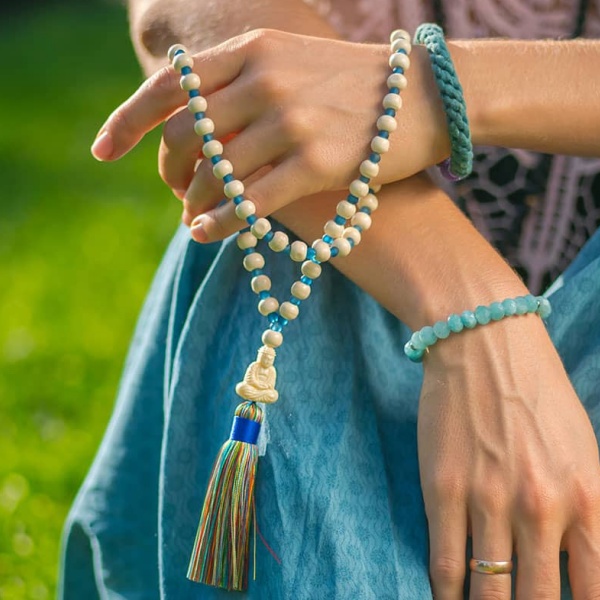 It is not disrespectful to wear the mala beads, as long as you are wearing them with the right intentions and you are not intentionally wearing them to show disrespect to a certain religion or culture.