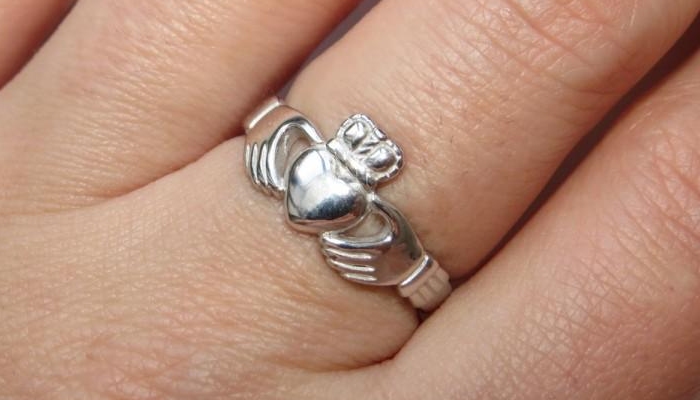 The Irish are known for a number of traditional style pieces, which can only be identified as Irish.

But we are not just talking about the kilts and the Irish accent – the Irish people offer so much more beauty to the world, and out of all their many creations, the Irish heart ring is one of their best creations.

This ring is deeply meaningful and forms an integral part of Irish culture. But what is it exactly?

What is the Irish heart ring called? 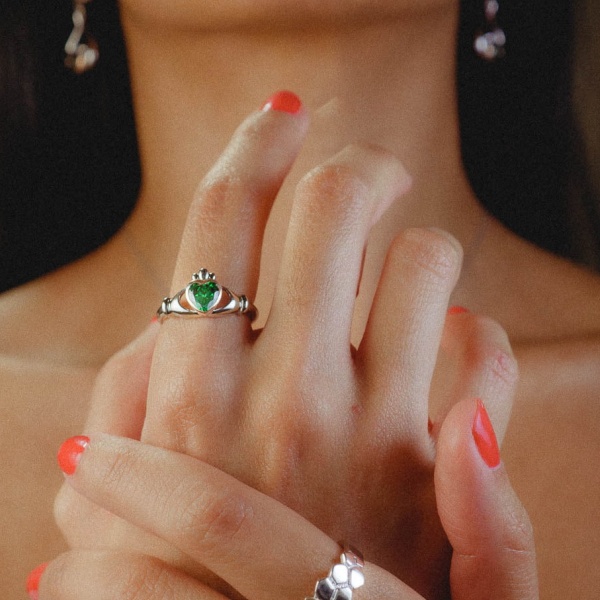 For starters, it’s important to note that the actual meaning of the Irish heart ring is the Claddagh ring.

The ring design is unique, and it has endured for several centuries. Claddagh’s rings are elegantly and intricately designed, and the uniqueness of the ring has continually captured the imagination of people across the world.

But it’s not just that the design of the ring is iconic; there is also the fact that the Irish Claddagh ring represents one of the oldest styles and designs of rings steeped in Irish history. 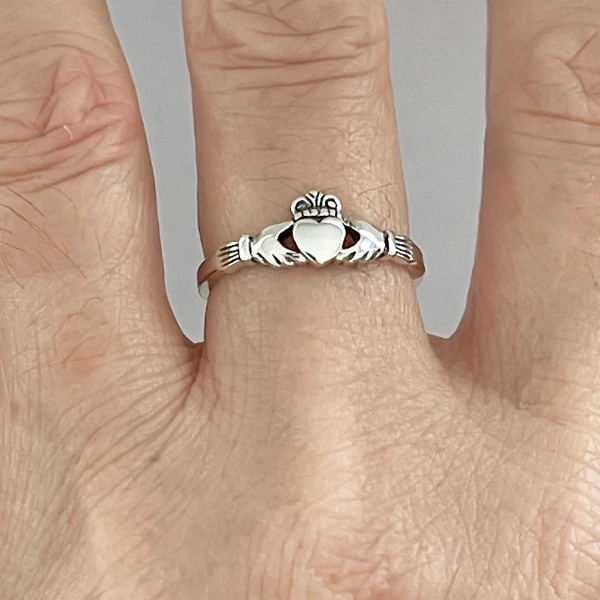 Over the years, the Irish emblem has grown into a universally popular, stylish, and highly sought-after ring style, especially among younger couples.

The ring is also important because it is regarded as one that adds a layer of meaning to love and relationships, including friendships. Besides wearing this ring to celebrate friendship, you could also wear it as a promise or a wedding ring.

Where Did The Claddagh Ring Get Its Name? 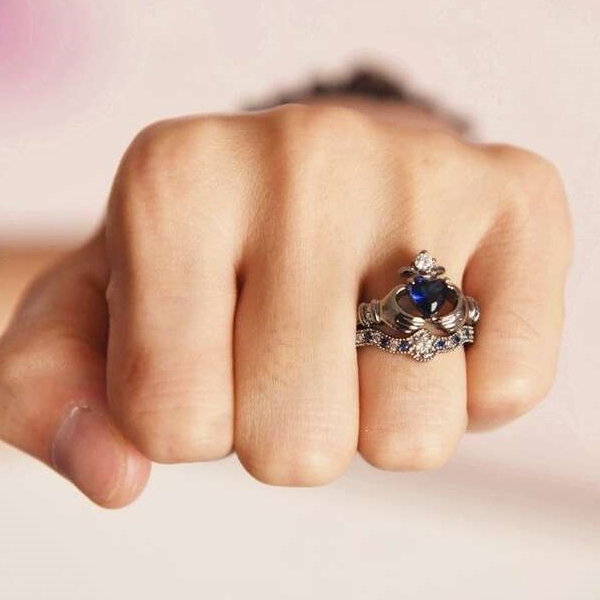 But for the most part, the ring got its name, the Irish Heart ring style, from the fact that the ring is detailed and designed with two carved-out hands holding a heart. And so, the ring symbolizes vows and betrothals, loyalty, love, and friendship.

But where did these rings get their name from? How did the Claddagh ring come to be? 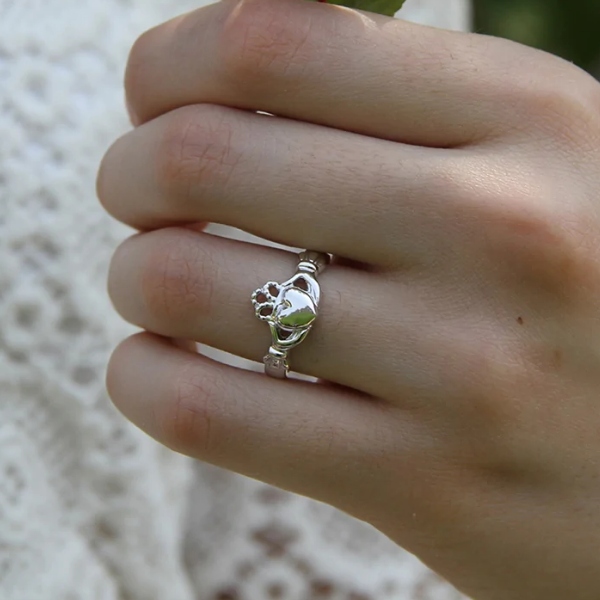 As mentioned above, the Claddagh ring represents one of the older European finger ring styles, and its design was derived mainly from the group of rings called the Fede rings.

Now, this is important to take note of because the name fede is from the phrase (Italian), ‘in fede,’ which means hands joined together in loyalty or in faith.

There are many myths associated with this, as there are legends around the Claddagh rings, but it is believed that the name Claddagh originated from one of Ireland’s small fishing villages called Claddagh, located in Galway. 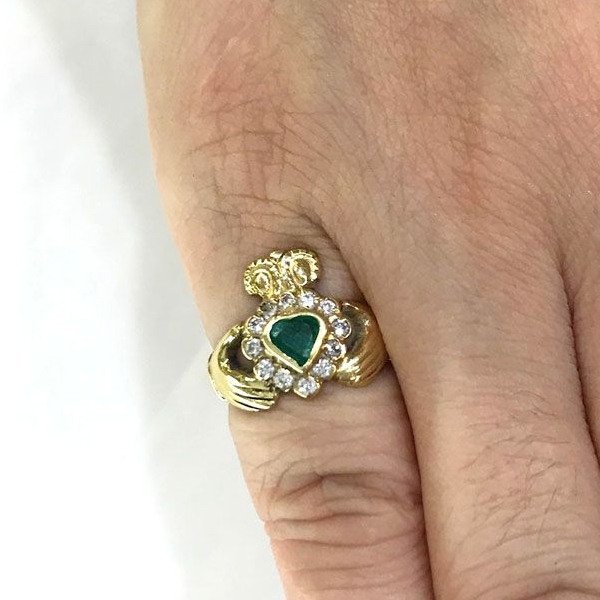 But that is not all; there is also the fact that this type of Celtic jewelry comes in different styles. The Claddagh ring in Gaelic is referred to as the fáinne Chladaigh, and it has deep Irish roots – it is connected to the country, Ireland, and her people.

However, the ring carries different meanings for people from different customs and cultures. The word Claddagh for the Claddagh ring is synonymous with the Irish-style ring bearing the name that is derived from Gaelic to mean stony beach.

The story behind the Irish heart ring 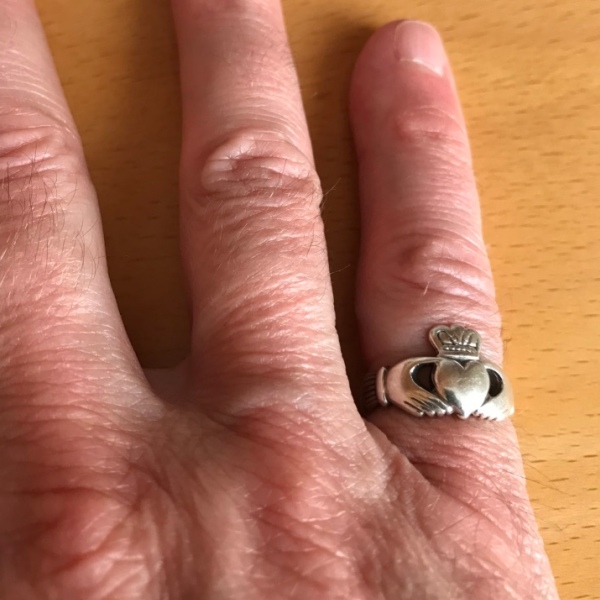 While the Claddagh rings are believed to have gotten their name from the small Celtic fishing village in Galway called Claddagh, the real origins of the ring, specifically in Ireland, is not 100% clear, and there are many tales about the Claddagh rings.

One of the tales about the Claddagh ring dates back to the 1600s and is about a prominent family called the Joyces. The family was born and bred in Claddagh, Ireland, and the guys from the Joyce family made a living fishing.

Legend has it that in one of their many fishing expeditions, the pirates captured them, and taken across the seas to North Africa, and there, the men were sold as slaves. 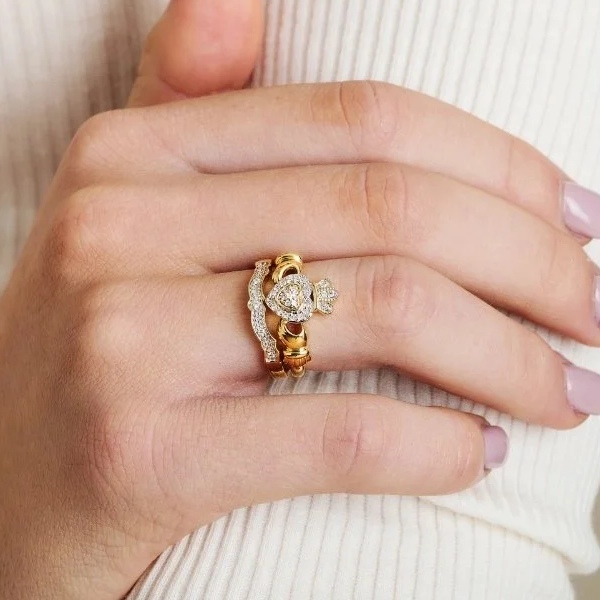 One of the youngest Joyce men, Richard, had been captured too, and this turn of events devastated him since he’d was deeply in love and the love was still new.

Being taken away on the pirate ship and being sold into slavery meant a possibility that the last time he saw her would be the very last time. Of course, this sounds like another one of the Princess and Cinderella stories, specifically, the Princess Bride. But that is not the end of it.

Despite the heartbreak, Richard kept some hope even after he was sold into slavery. His work was in the one of the many goldsmith shops. And every day while in captivity, Richard too small pieces of gold for safekeeping.

After a long time, he had enough gold stashed away, and from the gold pieces, he fashioned a gold ring for his betrothed; this ring was the first-created Claddagh ring. 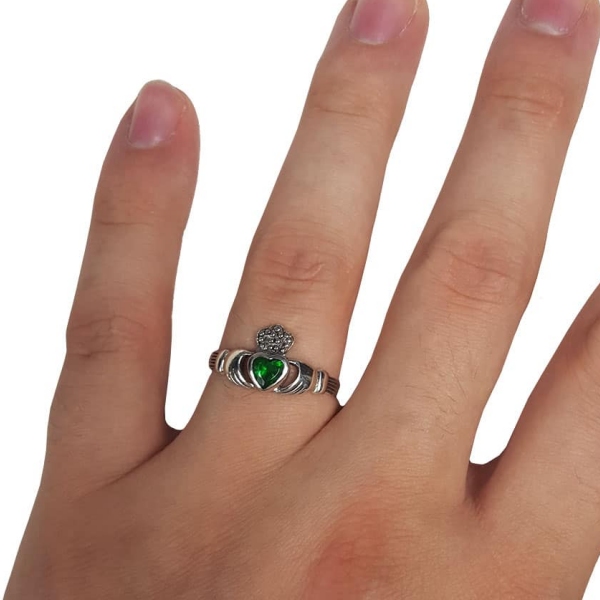 All the time he was enslaved, Richard remained hopeful that he would again go home, and there, he’d give the ring to his love.

14 years in slavery, he won his release, specifically in 1689. By this time, he had been so far away from home, and he didn’t have any idea of what his life would be, especially with his beloved.

He worried that maybe she would have moved on. But to his surprise, she had been waiting for him all that time, and, as he intended, Richard gave his love the Claddagh ring that he had crafted as a sign of his devotion.

As a result, many of the earliest designs of the Claddagh rings were engraved with his initials R.J. So, unless someone with the same initials as Richard Joyce made the rings, it is quite likely that he is the one who created the ring. But, like other legends, this story may or may not be true. 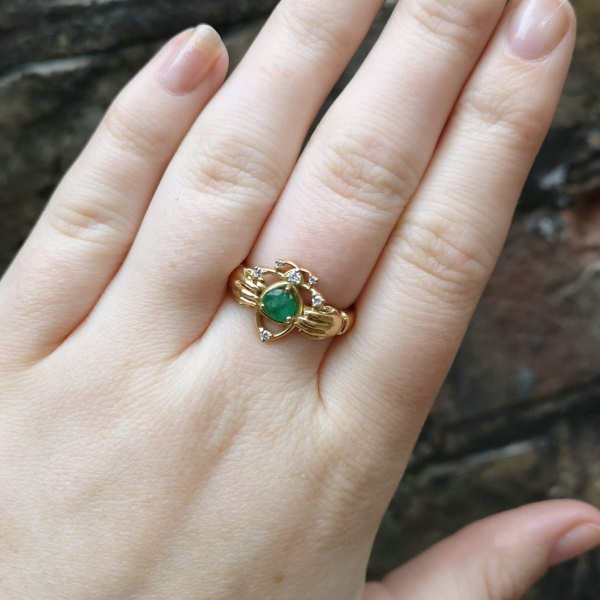 But there is another story about how the Claddagh rings came to be. This story also involves the Joyce family, and in this mythical account about Margaret Joyce, it is believed that the elegant Irish heart ring was brought down to earth by an eagle, randomly flying high, dropped the ring into Margaret’s lap. And so, Margaret took the ring as an important sign offered to humans by the gods/ the heavens. And so, while the story of the pirates and long-separated lovers sounds fantastic, the eagle story seems a lot more believable.

Since the beginning, however, three main elements make up Claddagh rings. These elements are unique to all the Irish heart ring designs, although some motifs may not be completely original.

These rings feature a clasped hand motif holding a heart, and the design still dates back to Ancient  Rome, where it was worn as a fede ring or a faith ring. 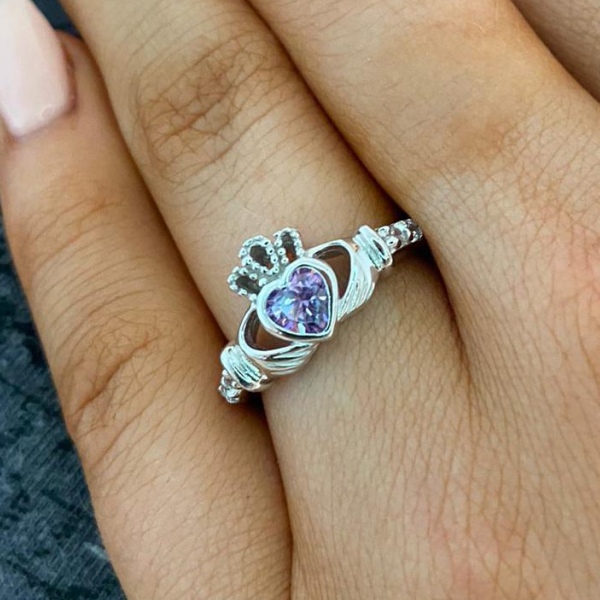 This ring was designed and endured well beyond the ancient parts of Rome, and it became a popular style in Europe and the rest of the world, leading to the creation of the now infamous Claddagh ring.

People, often couples and family members, would exchange faith rings to show their affection, and it remains common practice to date.

In America and the rest of the world, the Claddagh ring first made its debut in the 18th century as the Irish people emigrated to America, and they brought in the Claddagh rings alongside their traditions and culture. 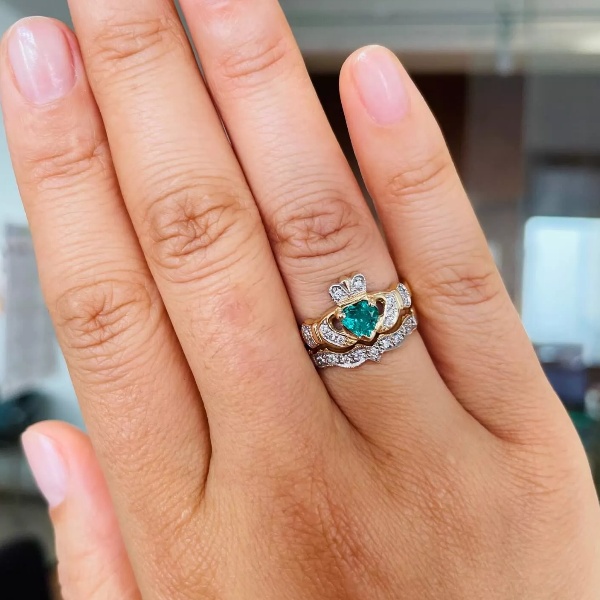 Although people still wear and exchange Claddagh rings for numerous occasions, often between lovers, the traditional Irish views of the rings stay on today. Traditionally, parents and mothers passed down Claddagh rings to their daughters as they were getting married. 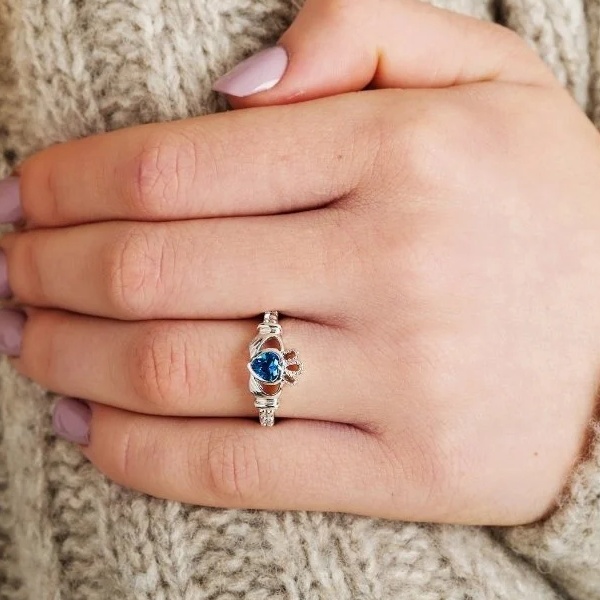 The Claddagh Ring in Pop Culture 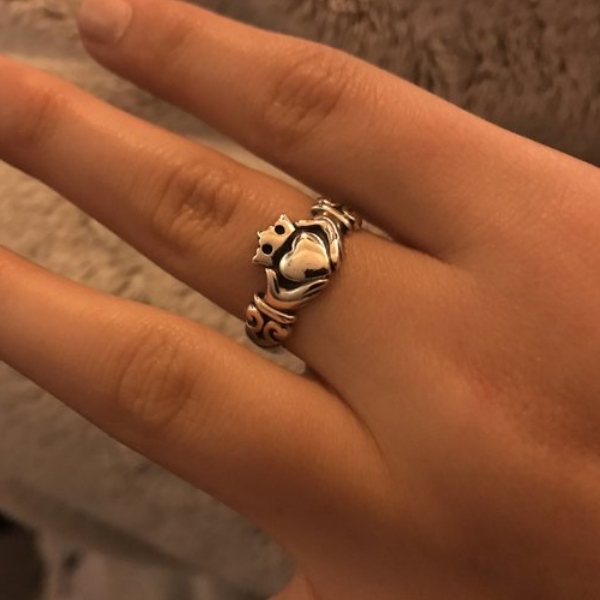 It symbolizes love, friendship, and loyalty, and though it first appeared in the 17th century, the ring has been apopular ring designs that is common with politicians and royalty – it was worn by Queen Victoria of England in 1849 when she visited Ireland, King Edward VII, and Queen Alexandra, Princess of Monaco, Grace Kelly, and Prince Rainier when they visited Galway in 1962 and received a cuff link and a brooch, both bearing the Claddagh ring style. 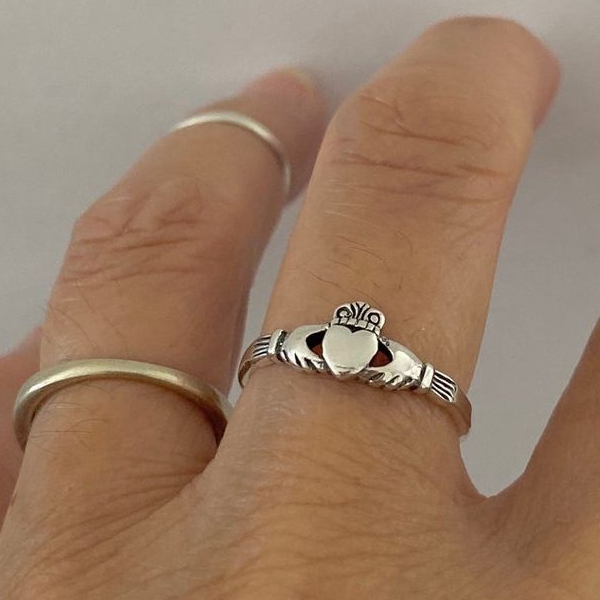 Many other popular individuals have been known to wear the Claddagh rings, including the Kennedys, Winston Churchill, and Ronald Reagan.

Celebrities also wear the Claddagh rings, and some of the stars wearing the ring include Julia Roberts and Jennifer Aniston, among others. The ring has also been featured in film and television.

How to wear it in a right way 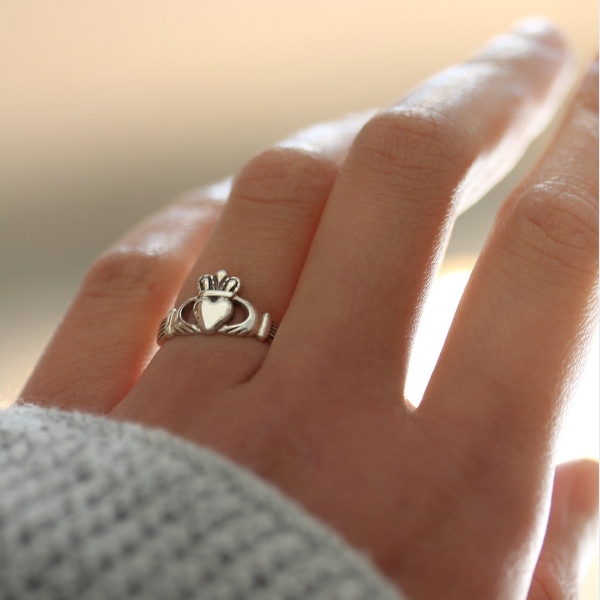 Claddagh rings are an essential part of Irish and European history.

The ring is also quite meaningful, and unlike other traditional ring styles, the design of the Claddagh ring has remained unchanged for centuries.

The Claddagh ring is the ultimate symbol of love, loyalty, and friendship.

For more ring topics, please visit this page for more or visit our homepage!