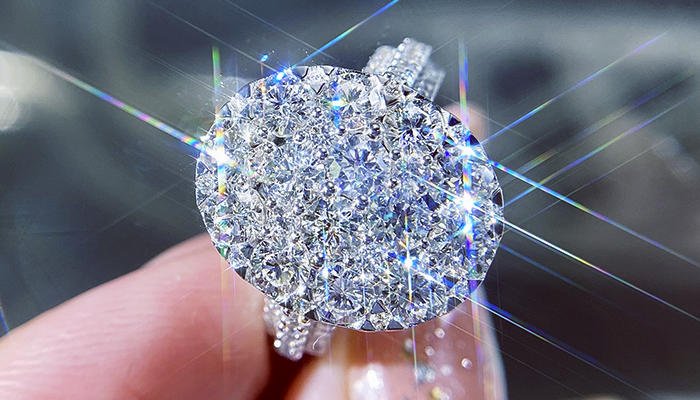 One of the rarest findings in the jewelry world is a flawless diamond! You can spend half your life on a shopping spree trying to find one without any flaws.

This, however, does not mean that they do not exist. On one end of the diamond clarity scale, you may find a flawless diamond, while on the other end, you may find one that has too many inclusions that tamper with its clarity.

The middle of the scale has some diamonds with inclusions that aren’t visible to the naked eye but can be seen clearly under 10x magnification. These type of diamonds are the most common, and you can always find in different jewelry types including rings, necklaces, and earrings.

That said, the clarity of a diamond is an important factor to consider when looking for a good quality diamond.

In this article, we will explain what inclusions in a diamond are, and expound on the various types of inclusions that exist.

What does an inclusion in a diamond look like?

Diamond inclusions are small imperfections that occur inside the gemstone. They are described as flaws by the Gemological Institute of America, and it is very rare to grade any diamond as internally flawless. Generally, diamonds are formed under tremendous pressure and heat in the Earth’s core. Because of this, imperfections are left on the surface of the diamond. Sometimes they look like tiny crystals, dots, or lines embedded within the diamond.

Some inclusions are barely visible, while others may entirely affect the clarity of a diamond. Flaws affect the brilliance of your diamond because they block the light passing through the stone. Even worse, some inclusions make a diamond susceptible to shattering and cracking.

The very few perfect diamonds that exist cost a fortune, while the ones that have too many inclusions are sold at a throw-away price. Average priced diamonds have varying amounts of external and internal imperfections. Most jewelers would ask you to ignore any diamond inclusions. But only if they do not tamper with the sparkle and strength of the stone.

Inclusions are identified during the grading process and are given a grade between 0 and 10. Ten being diamonds of the lowest quality and with the most inclusion. Zero, on the other hand, is a diamond that is almost flawless and of good quality.  The grading system begins with the cut followed by the color. Afterward, it ranks the diamonds in terms of color and lastly carat weight.

What is a crystal inclusion in a diamond?

Crystal inclusions look like smaller diamonds within the diamond. These tiny crystals sometimes add character and life to a diamond.

Some diamonds have garnets, which are a great choice for you if your birthstone is garnet. Most crystal inclusions cannot be seen with the naked eye and require at least 10x magnification to identify them distinctively.

However, large chunks or grouping crystals within a diamond tend to fuse. When this happens, they tamper with the visual appearance of the diamond.

Because of this, they lower the clarity grade of the diamond and degrade its value.

What is an indented natural inclusion in a diamond?

The indented natural inclusion is an imperfection that dips underneath the polished surface of your diamond.

To describe this further, indented inclusions are part of the rough diamond that wasn’t touched during the polishing process.

You would find this type of flaw in the girdle. If you take the time to evaluate a diamond with the indented natural inclusion, you may begin to think that your diamond has chipped.

Overall, the diamond cutter will have to leave the inclusion in the diamond if its carat weight has to be maintained.

What is a feather inclusion in a diamond?

This inclusion has a visual appearance that resembles a feather. Feather inclusions are small internal cracks within a diamond.

They are often whitish. Sometimes, they contribute to the beauty of a diamond, especially when they are tiny.

However, when they are present from the top to the bottom of the diamond, its durability is compromised.

In terms of clarity, if they are small, your diamond should sparkle and enhance the aesthetics of your diamond, but if the feather inclusion is at the girdle, your diamond may be too dull to be used in a ring setting.

What is a natural inclusion in a diamond?

Natural flaws make everything unique, for both gemstones and human beings. Sometimes imperfections are found on a gemstone because they contribute to its aesthetics.

A natural inclusion is perhaps one of the best inclusions to occur on a diamond. It is part of the rough diamond that stays on after the diamond is cut.

You would find natural inclusions around the four corners of your diamond’s girdle. This type of inclusion is treated as a cutter’s guideline.

Sometimes, some diamond cutters tend to leave on natural inclusions purposefully, as proof that they didn’t remove too much of the diamond during the cutting process.

What is a knot inclusion in a diamond?

Knot inclusions are described as crystal inclusions that have reached the polished surface of the diamond.

With proper lighting and powerful magnification, you can easily see the point at which the knot and the surface of the diamond meet.

Unfortunately, this is among the worst inclusion types that you can have on a diamond.

Mostly because it can be seen directly with naked eyes because it is close to the exterior of the gemstone.

It gives the impression that one part of the diamond is raised on one of the facets, which isn’t visually appealing. Also, they affect the durability of the gem.

Even the slightest drop, can shatter the diamond. So, if you come across this type of inclusion, try to avoid the diamond as much as you can.

What is a cloud inclusion in a diamond?

When you look at a diamond with a cloud inclusion, you will see something that looks like a cloud.

Cloud inclusions are described as a cluster of crystals or pinpoint inclusions.

When pinpoints and crystals are too close to each other, they clump, forming a structure with a round shape. The majority of the time, they aren’t so visible when they are small in size.

However, if they are a bit bigger, they have a white color and a hazy appearance.

This in turn affects the overall light performance of the diamond.

When looking at the diamond grading report, you will automatically know that your diamond has cloud inclusions when you see a circle with pinpoints or one made up of small red dots.

What is a pinpoint inclusion in a diamond?

Pinpoint inclusions are the most common type. They tend to appear in a diamond as small white dots that resemble pinpoints of light.

Some pinpoints may come in either black or gray. They can either appear individually or in clusters. Generally, they are very difficult to locate, so you wouldn’t see them with the naked eye. You can only see them clearly under 20x magnification or higher. However, when there are three or more pinpoints within one area, they form a cloud inclusion. When this happens, the hazy area affects the diamond’s clarity rating.

That said, there are specific inclusions that you may want to completely avoid when purchasing your ring to avoid regretting your decision. The first one being the black carbon spots or crystals.

The black spots entirely block light from going through your diamond, which makes it dull and lifeless. Also, long fracture or crack inclusions tamper with the aesthetics of a diamond.

I don’t think you would want to walk around with a diamond that looks as though it is about to break. If you slam a diamond with a long fracture on a hard surface, it will break.

Lastly, you should avoid diamonds with large cloud inclusions. They tend to have a hazy effect which eliminates any chances of brilliance.

The beauty of a diamond is seen in its fire and brilliance. Without that, you’d rather pick out an engagement ring with a different gemstone instead.

Generally, you can only identify the inclusions in a diamond when it is loose. When it is set, grading may be a challenge because the bezel or prongs may conceal the inclusions.

This is a good thing if you have any gem with inclusions because you won’t have to worry much about the flaws when wearing your ring.

Guys, you can read more diamond topics in this section, or visit our homepage for new posts!