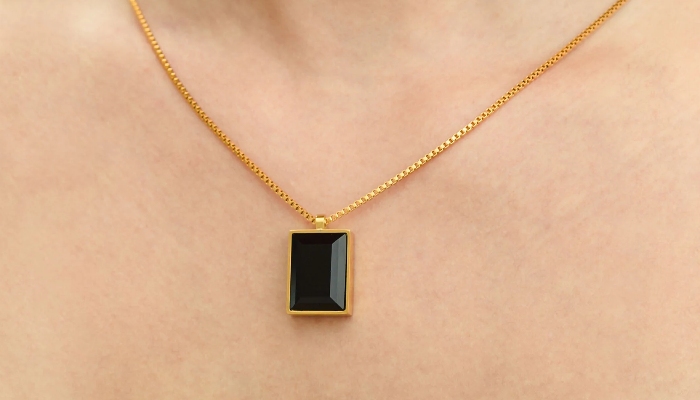 Despite the name, it is available in an enchanting variety of colors and hues, which also means that there is something for everyone.

It is known mainly for its vitreous luster, and not just that, the stone also falls under the category of crystalline boron silicates.

Some facts about black tourmaline jewelry 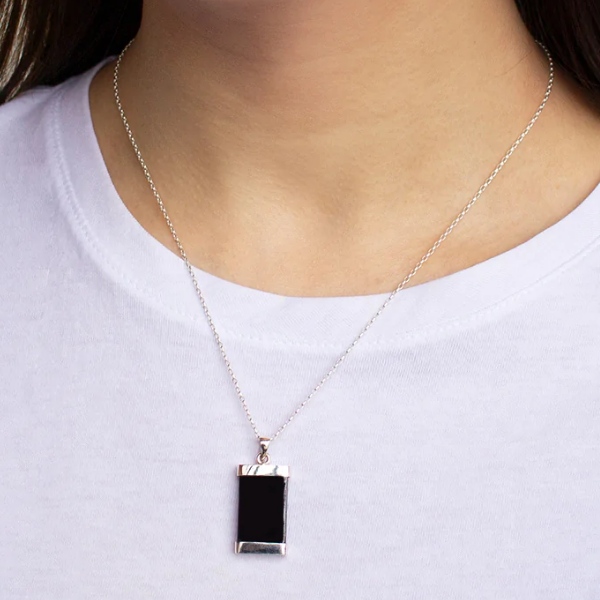 Black tourmaline is crystalline borosilicate that is renowned for its karmic benefits and also the fact that it brings the wearer luck. Tourmaline is one of the hexagonal crystalline structures with an opaque type of transparency.

Despite the name, tourmaline is often found in different colors, including black, purple, pink, green, watermelon, and also in rainbow colors, among other hues.

The other thing you should know about tourmaline is that this gem is mined from different locations across the world, with some of the largest deposits for this gem found in India and Australia.

Tourmaline gets its name from a Sinhalese word, turmali, which translates to an ‘unknown gemstone that has mixed colors’ and adds to the aura of mystery around the exact composition of black tourmaline. 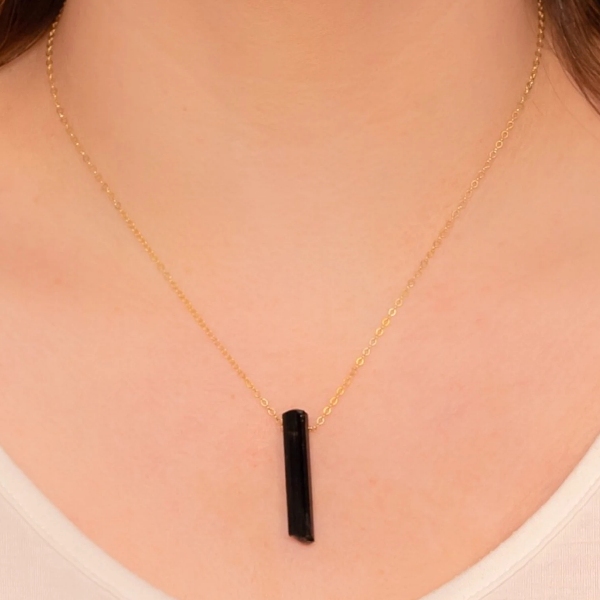 The color variety of tourmaline is the reason why it is often confused with other gemstones and semi-precious stones. Since tourmaline is usually found in pretty much every color, it can be as clear as an actual diamond.

Black tourmaline’s primary source is boron, which is found in magma or the earth’s molten rock, and its crystals are made of boron, aluminum, silicon, and hydrate molecules. It also contains calcium and sodium but never both, and iron, magnesium, and lithium.

Black tourmaline is made from the pegmatite volcanic formation from which the stones are formed. Pegmatite features course grain, and in some instances, it’s made of large crystals that are formed during the cooling of magma, so, unlike other rock forms resulting from molten rocks, pegmatite is formed using aqueous solutions that are formed within magma. 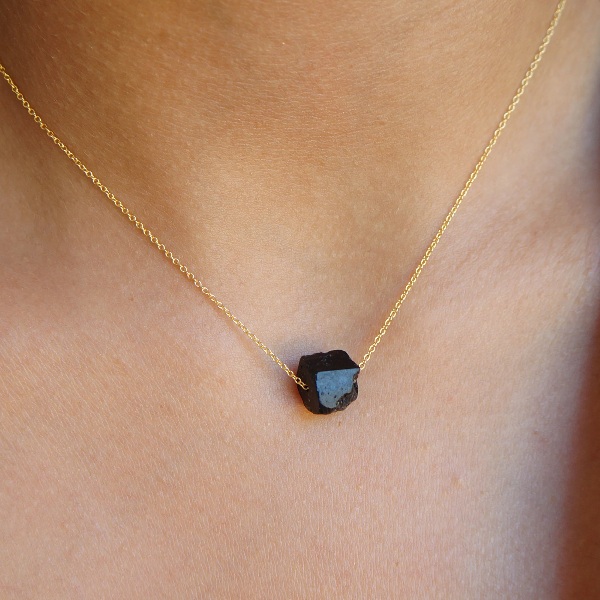 There also are streaks of hot liquid rich in silicone and iron. As the pegmatite rock formations are mixed, the liquids involved cool down; hence the formation of crystals and tourmaline is one of the crystalline minerals in pegmatite forms.

Thanks to the deep dark color of black tourmaline, it is a somewhat meaningful crystal mineral representing cleansing and purification. This stone may also remove all negativity around the person wearing it, and having it may relieve the wearer of feelings of anger, anxiety, and hopelessness. It is also a symbol of strength.

Is tourmaline a negative crystal? 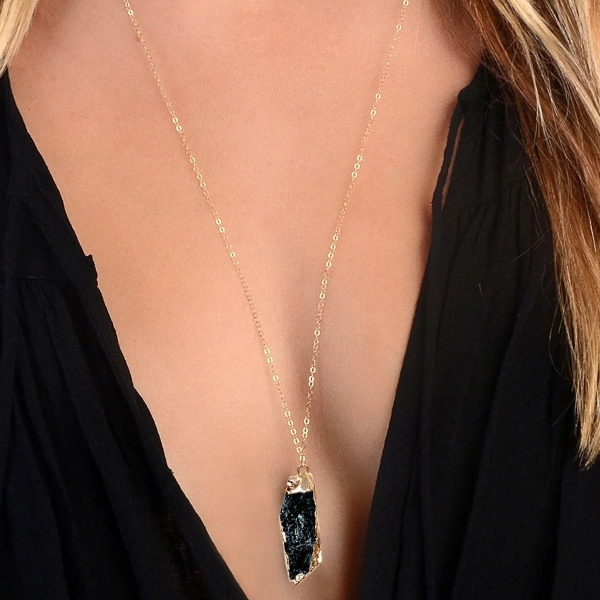 Tourmaline is a piezoelectric and pyroelectric crystal, which means that it naturally generates negative ions. However, it only creates negative ions when activated through exposure to electricity or any other form of external pressure.

What are tourmaline crystals good for? 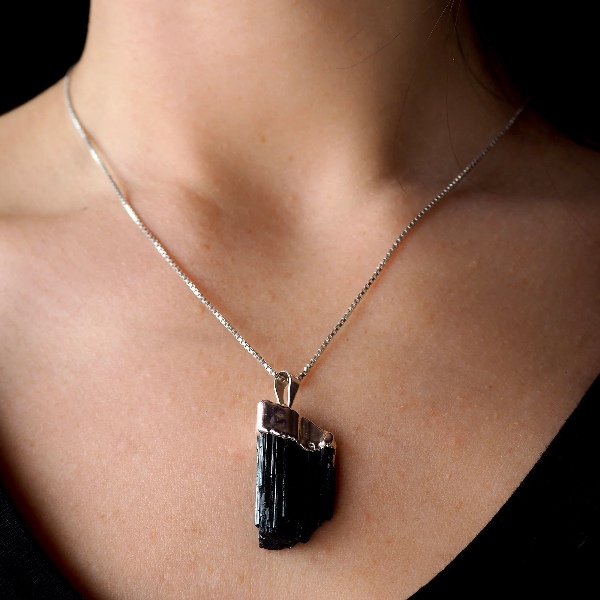 Tourmaline, especially black tourmaline, is one of the most important crystals you could have in your life thanks to the iron-based mineral composition of this crystal, which has a historical and a modern connection, offering you a high level of protection.

So, what are some of the benefits of black tourmaline? 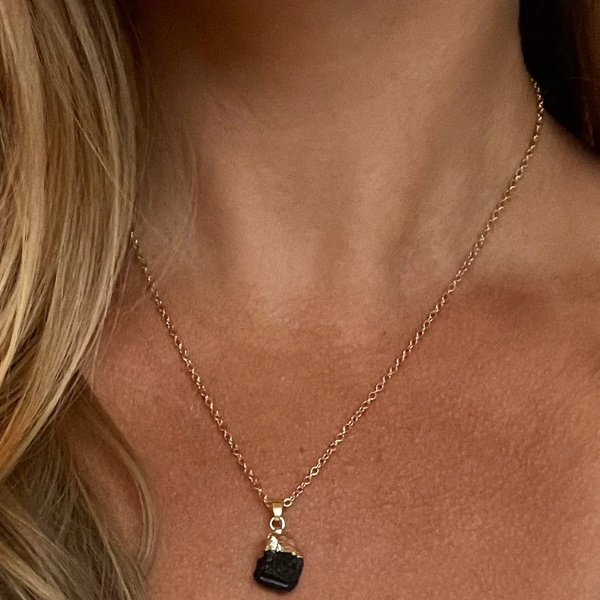 The best thing about black tourmaline is that it offers a high level of protection and protection.

So, it will protect and shield you and remove all unwanted energy from your surroundings and life, especially if you are going through a tough and challenging time. 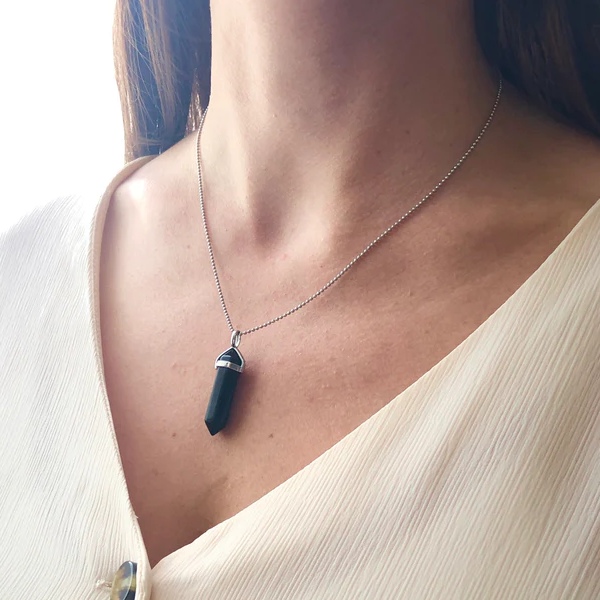 You may also like wearing black tourmaline and other kinds of tourmaline crystals because it has strong grounding effects. If you have been feeling a little spaced out, anxious, and just unsettled, these crystals will help you become aware and bring you down to earth.

Experts show that black tourmaline is a grounding crystal that will easily offset the effects and power of the high-energy crystals, which aren’t that much grounding; Thanks to tourmaline, you will feel a lot more centered and present also very powerful.

3. It makes you feel more motivated 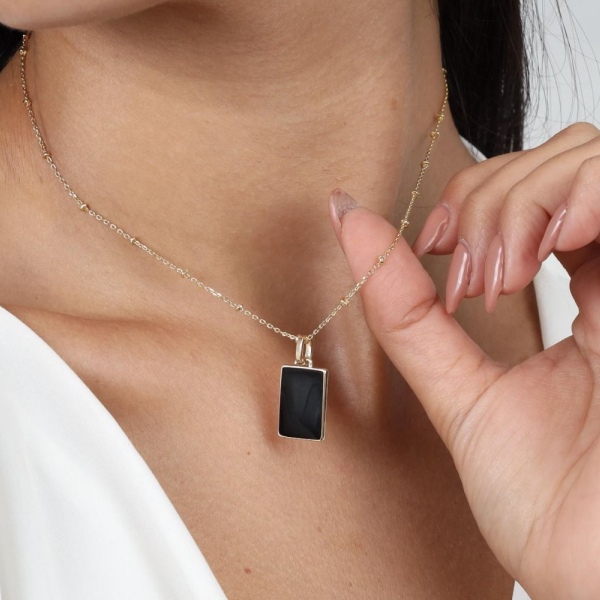 Besides making you feel more grounded, black tourmaline will also make you more motivated and energized.

This is because its grounding effects that tie you with the earth’s energy will make you feel more connected, which means that you will feel so much more motivated and have the zeal for life and success.

So, if you are feeling unproductive and unmotivated, you may want to start wearing more jewelry pieces made of tourmaline or black tourmaline.

4. It gets rid of all negativity 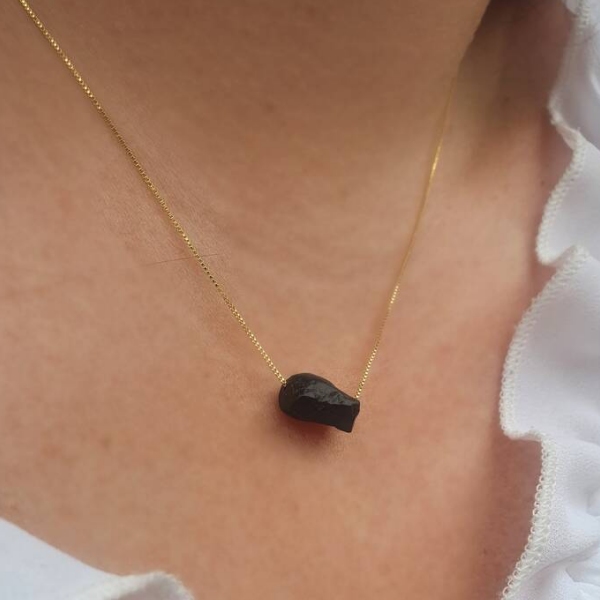 Black tourmaline is also one of the best crystals to wear or keep around your home or office if you are looking to clear all the negative energy from your life.

This crystal will eliminate negative thought cycles, and if you struggle with negativity from your environment, the crystal will give you that much-needed shield.

It will also cleanse your body of bad energies, especially when you wear the crystal alongside a stone-like selenite. Together, black tourmaline and selenite will keep you present and mindful, and you will also be more in tune with what’s happening around you.

So, as much as black tourmaline looks like it’s stripped of color, it is one of the most powerful stones you should keep wearing when you need a cloak of protection.

The inky black crystal also bears strong grounding powers, and it’s known for being a great swallower of the negative energies that may be around you, which means that it will effectively absorb the negative or dark feelings, and in so doing, it will turn the anxious vibrations around, give it a positive spin which would be nurturing to your soul.

5. It makes you feel secure 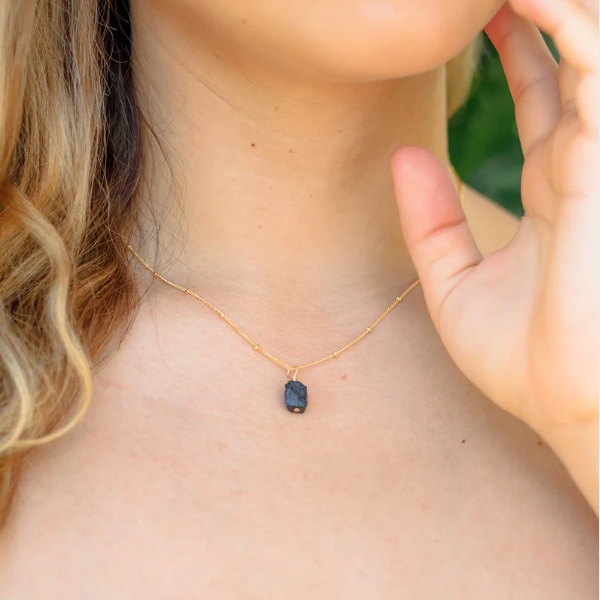 Black tourmaline is one of the crystals bearing a deep connection with the base chakras, and thanks to its earthy roots, the crystal makes you feel secure and safe.

Generally, whenever you have a nice balance in your root chakras, you will develop a  high level of self-confidence, allowing you to embrace who you are.

It also allows you to speak your mind and your truth, and most importantly, you will be set on the right path leading you to a high level of spiritual healing. Wearing black tourmaline crystals will also pave the way for your life, making you happier, more secure, and more successful. 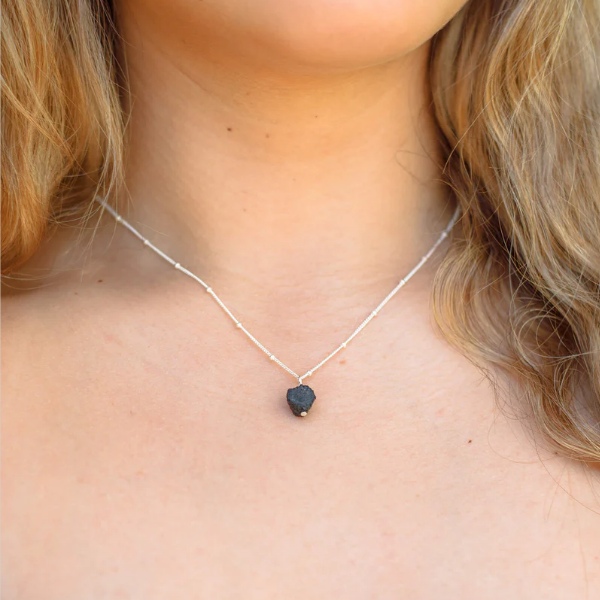 It also blocks EMFs, and it will also boost your metabolism, hence a reduction in health problems.

Which hand to wear a black tourmaline bracelet? 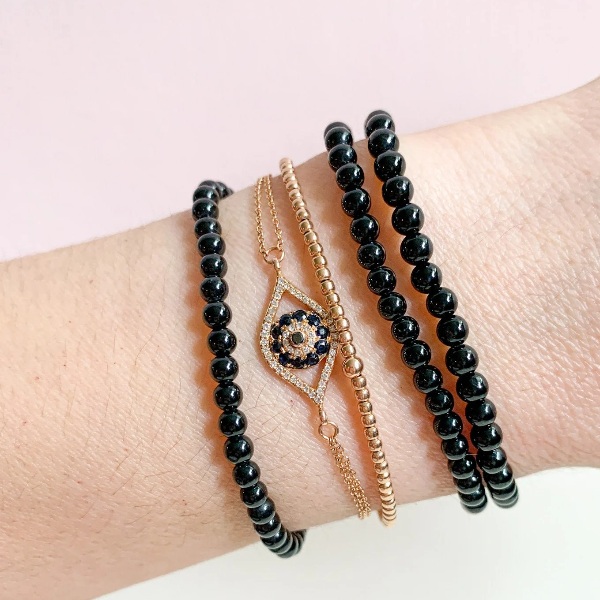 You are meant to wear your black tourmaline on your right hand because it is the giving hand that releases energies, specifically negative energies.

Wearing it on the right wrist also means that it will protect you from negative energies.

Who should not wear black tourmaline jewelry? 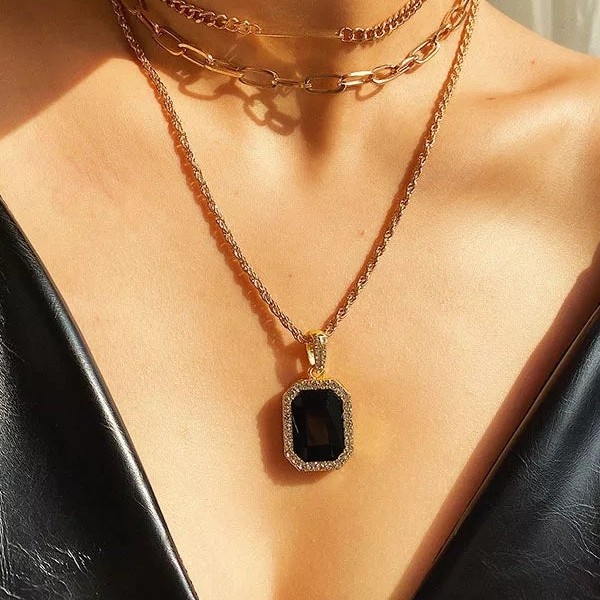 The signs that should wear black tourmaline jewelry are Capricorn, Scorpio, and Libra.

These are the sun signs and moon signs that should avoid this crystal.

How to wear black tourmaline jewelry in 2022 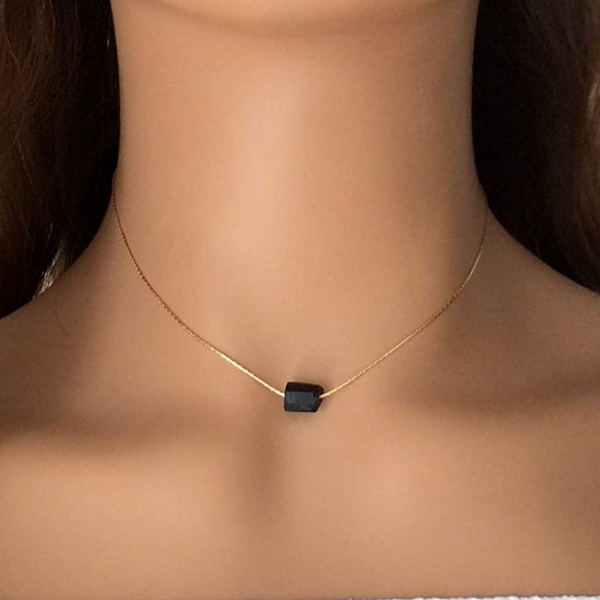 Generally, you can wear black tourmaline as a necklace, ring, or bracelet, and you’d only want to ensure that the jewelry rests against your skin.

Wearing these jewelry pieces against your skin will provide maximum protection and grounding effects.

Black tourmaline is a grounding crystal that offers protection and will keep you grounded.

It will also block negativity, enhance your positivity, and make you happier, secure, and happier. For bracelets, wear them on the right hand.