Being one of the most powerful crystals, the Tiger’s eye is among the most popular gems in the world.

At one point in the 19th century, this lustrous golden stone held the same value as gold. It remains a highly valued crystal, not just for its beauty but also for its healing abilities. Given its popularity, it should come as no surprise that there simulated and cheaper versions of the stone exist.

The problem is simulated gems closely resemble the real gem, so it can be difficult to tell them apart especially for the untrained eye.

In this post, however, we will share with you how you can identify a real tiger’s eye stone from the fake one.

Is the Tiger Eye Stone Rare? In terms of worldwide distribution, the tiger eye stone is quite rare.

In South Africa and Thailand, however, you will find sizable deposits of the stone, hence the quality of this stone from these countries is quite high.

Other countries like China, India, Spain, Brazil, and Australia have large collections of the stone.

As a result, despite having a few of its deposits around the world, the tiger’s eye is still relatively affordable and available.

Can a Tiger’s Eye Be Fake? Given that the tiger’s eye is an affordable stone despite its high demand and popularity, one may wonder whether there are fake versions of the stone in the market.

While there are no known synthetic versions of the stone, some jewelers use fiberoptic glass to imitate the tiger’s eye.

There are no natural stones that are used as stimulants of the tiger’s eye because those that closely resemble it are far more expensive, therefore wouldn’t make sense to be a stimulant.

Each tiger’s eye stone is unique and may tend to slightly vary from the others because of the cut and polish.

There are, however, certain characteristics that define a real tiger’s eye stone. The following are the main ways for you to identify an authentic tiger’s eye: 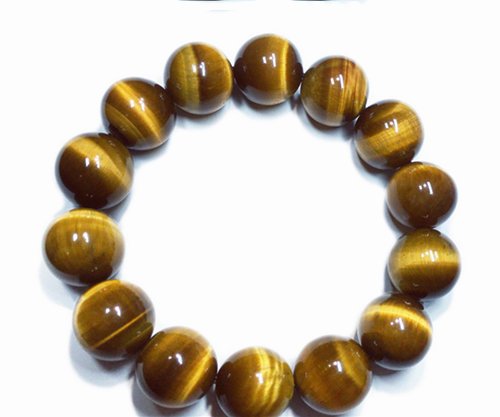 1. Observe the stone for the cat’s eye effect.

Also known as chatoyancy, this is the luminous band on the stone that closely resembles a cat’s eye.

It is caused by the optical reflectance of the stone due to the cabochon (convex-shape) cut, most stones have.

Being a part of the quartz family, an authentic tiger’s eye stone should have the cat’s eye effect. 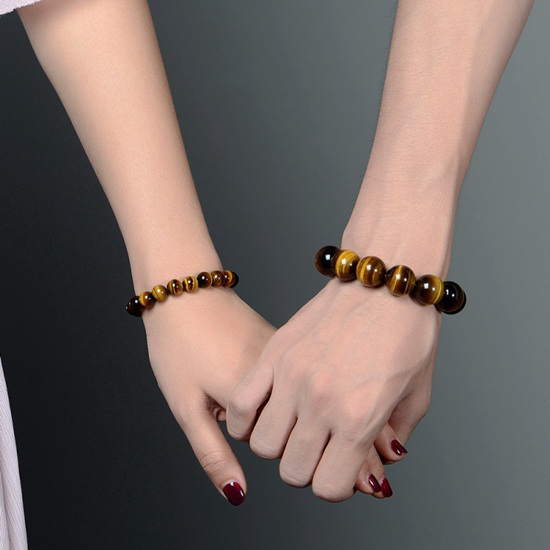 To check for this, shine a bright light on the stone or hold it under a bright lamp.

Slowly tilt the stone back and forth and observe how the yellow color band changes such that the inside of the stone appears to be moving.

If the stone doesn’t have this effect, it means that it is not the real tiger’s eye. 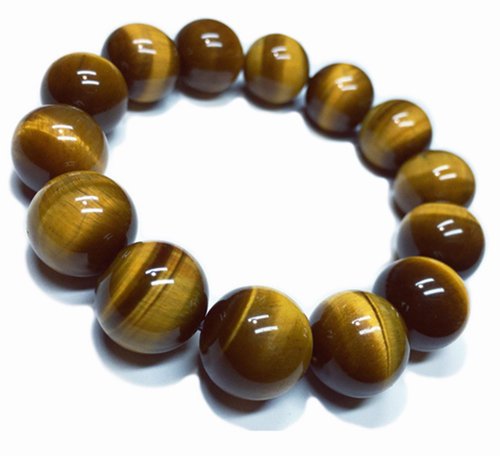 Authentic tiger’s eye is made up of brown, golden, and yellow colors. These colors are in linear bands that resemble furrows in a rock.

The colors may vary slightly in terms of how dark or intense they are. For example, in some stones, the brown color can be dark, sometimes even black.

There are, however, certain color bands that indicate the stone may not be the real tiger’s eye. 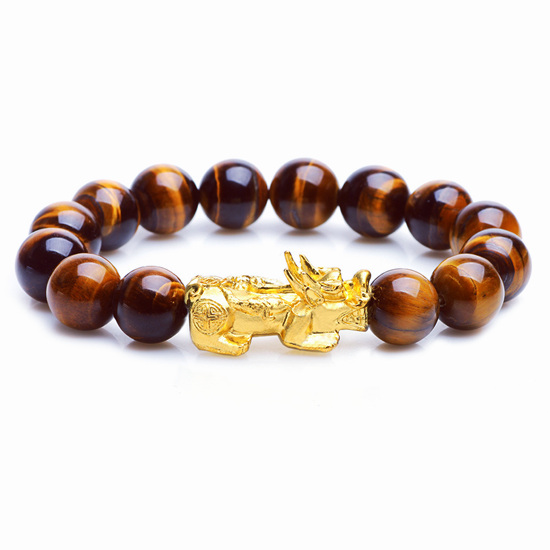 3. Examine the glossy luster of the stone.

Like all popular gemstones, the tiger’s eye is coveted for its luster.

This particular stone, being a type of quartz, has a silky finish and a glass-like luster, especially when polished. To examine this, hold the stone up to the light.

The stone should look like glass in a way when reflecting the light. You should notice a silver-toned hue in the luster when the stone is under the light.

This may not be the surest way to determine the stone’s authenticity since most fake tiger’s eyes are made from glass fiber. So, you might want to combine this test with others just to be sure. 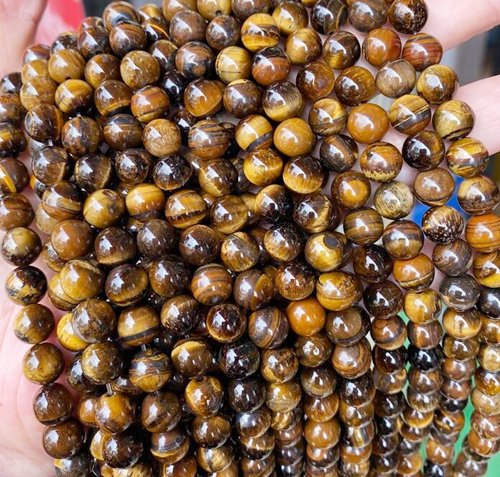 Another way of testing the stone is by testing its durability in terms of its hardness. Quartz is believed to be among the hardest crystals.

Glass is used for this test because it is significantly softer than quartz.  Glass is a form of apatite which has a score of about 5 on the Mohs scale. 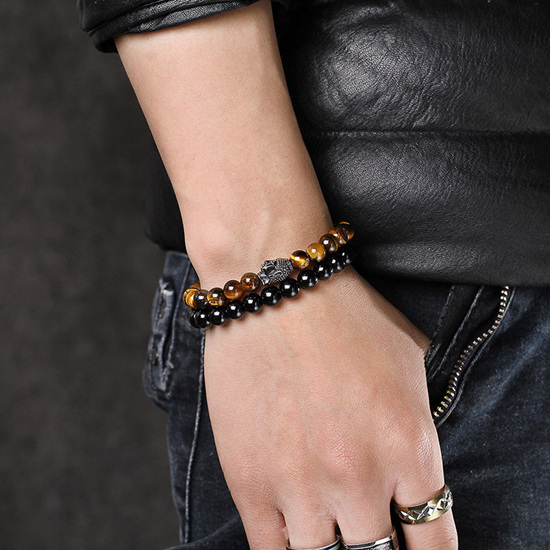 As a result, since the tiger’s eye is a form of quartz, it should be able to scratch glass and not the other way around.

This is a sure test for authenticating the stone, since other quartz stones like the Pietersite, which closely resemble the tiger’s eye, are more expensive hence unlikely to be used as the stone’s stimulant.

Other Characteristics Of The Tiger’s Eye. 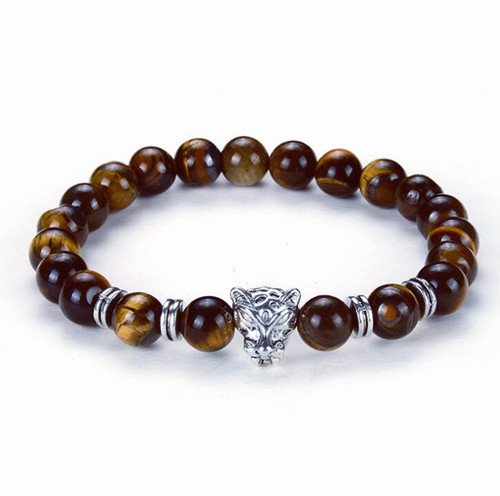 To sum it up, the following are some properties of the tiger’s eye that you should keep in mind when next shopping for an authentic tiger’s eye stone: 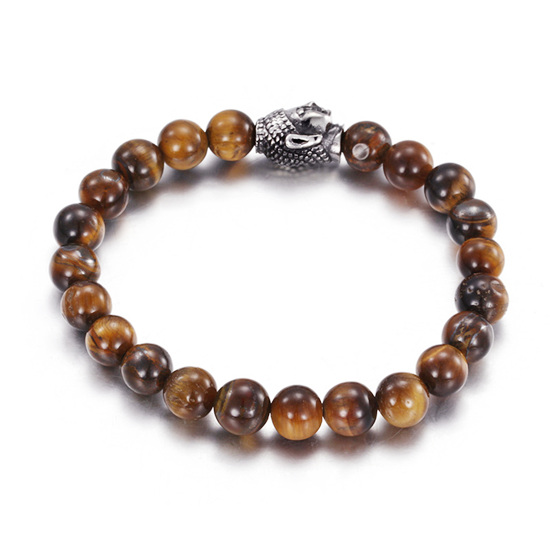 can you sleep with tiger eye stones?

Who can or can not wear tiger eye stones?

Like all gemstones, you will likely find fake versions of the tiger’s eye in the market.

To avoid being scammed, being knowledgeable about the stone and its properties is key.

You can apply the information we’ve shared with you in this post, on your next tiger’s eye hunt.