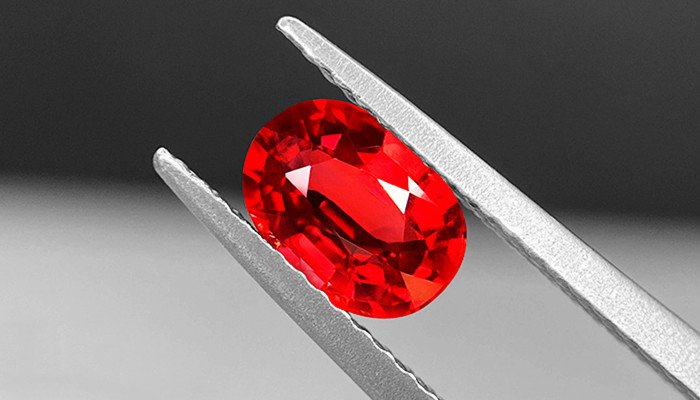 The vibrant red color of rubies and gemstones is associated with not just love, passion, and romance but also wisdom and royalty. That vibrant red is also the July birthstone.

But then the garnet also has that nice vibrant red color, and to the untrained eye, the sparking red for these gemstones is imperceptible.  So, how do you tell the difference between the garnet and ruby?

Well, this article shares important insights into all you should know about rubies and garnets.

As the name suggests, the natural ruby is an authentic stone that’s been formed under immense pressure for millions of years. It belongs in the corundum family of colored gemstones, the same as sapphires.

The intensity of the red color depends on the percentage of chromium present during the formation process of the gemstone. So, a higher concentration of chromium in the gemstone translates to more vibrant rubies.

It’s also important to note that because of the time it takes for rubies to form and the fragility of the extraction process, natural rubies are quite valuable.

That said, there also are synthetic rubies. These have the same chemical and physical structures as the natural rubies but are cheaper, and their manufacturing processes more sustainable and ethical.

The garnet is one of the most distinct imitators of the ruby. It is a red, eye catchy gemstone, but unlike the ruby, it doesn’t have the same level of brilliance as the ruby.

The garnet is made of a dark reddish silicate mineral, which isn’t as valuable as the corundum-based ruby.

So, compared to the ruby’s vibrant red color, the garnet tends to have more of a dull burgundy or a mahogany coloring.

The other thing to note about the garnet is that the garnet isn’t as strong as the ruby, with a rank of 6.5-7.5 on the Mohs scale against the ruby’s 9 rankings.

Here are the main differences between rubies and garnets.

The first thing that stands out between the rubies and garnets is that rubies are very rare, even harder to stumble upon, and also very valuable, compared to the garnets are not just specific or unique gemstones but a group silicate group that often is available in multiple colors.

Regarding the rarity of the garnets, the red garnets are abundant, but the green garnets are much harder to find in nature. So, if you are thinking about inspecting red gemstones and you find that they were easy to find, you may have to reconsider them and if they are genuine.

In most cases, it is difficult to find natural rubies that are bigger than 1 carat in weight, and most of the time, the bigger red gemstones are either synthetic rubies or fake garnets.

2. Color and Shade of the gemstones

While both the garnet and ruby have an impressive shade of red, there are some minute differences in the intensity, the color, and the hue of the gemstones.

The main color difference in rubies and garnets includes the deeper and a much more distinct red color of the rubies.

The garnets, on the other hand, appear much paler and lighter, and this difference in color is the main difference between them.

That said, the most valuable rubies tend to have a slightly purple tinge, and others even have a bluish appearance. And if you come across a red gemstone with more of a yellow or an orange hue, then the gemstone is garnet.

The other way for you to differentiate garnets from rubies is by looking at the clarity of the stones and how light passes through them.

The garnets are generally very clear, unlike rubies which often have flaws and inclusions. So, if you are looking at two red gemstones under the light but you’re unable to differentiate them, look for how the light passes through them.

Also, the rubies can absorb the colors green and yellow, meaning that you will not see many colors affected when you hold the ruby to the light because it absorbs the yellow and greens.

But the garnet reacts differently when held up to the light. So, when light passes through the garnet, you will see all the seven colors of the rainbow shining through.

In addition to the deep scarlet hue for the ruby, this gemstone boasts a high degree of brilliance, and it can be said to be glowy. This is not the case with the garnets, though.

Although it’s impossible to determine the roughness and the durability of the ruby or garnet by just looking at the gemstone, especially with the naked eye, these two gemstones have some big differences in their level of toughness and durability.

This is because they have different levels of hardness – the ruby is quite durable and tough thanks to its high hardness level that is ranked at 9 on the Mohs 1-10 scale. At this level of hardness, the ruby is not just durable but also resilient.

The hardness level of the garnet, on the other hand, ranges from 6.5 to 7.5, which means that despite its hardness level, it is not as durable, rough, or resilient as the ruby.

In addition to the natural rubies, these are the other types of rubies:

If you are buying red gemstone jewelry, but you’re not sure if the gemstone is an actual ruby or a garnet, here are some of the other things you should be looking out for:

Most jewelers dealing with rubies and other valuable pieces of gemstone jewelry will give you a certificate of authenticity for your purchase.

If buying jewelry online, be careful because you may be duped easily, especially if it doesn’t come with a certificate of authenticity. The genuine pieces, on the other hand, will come will legitimate and comprehensive certification for legitimacy purposes.

Genuine rubies have a typical light-red to medium red color/hue, unlike the garnets, which often have a darker red hue with mahogany or a burgundy cast.

That said, there are cases where the ruby will have some sort of mahogany cast on them. That said, the ruby has a dense clarity, and it’s not as refractive as the garnet.

3. Cut of the gemstone

Rubies and garnets also differ in terms of their cuts. The rubies will often have exotic cuts like the pear and cushion cuts.

With the bigger rubies, it’s almost impossible to find large rubies with standard cuts. So, if you have a 2-carat ruby with a standard cut like the brilliant-cut, it may be a garnet, not the ruby.

4. Check the stone under the light.

Hold the red stone in question directly in front of the eye so that the stone is almost touching the eye, then move it slowly towards the light and roll it between the fingers. Look out for the patterns the stone makes.

Rubies and garnets have a lot in common, but if using the tips above, you will be able to differentiate these red stones with ease.

As mentioned above, their main differences lie in the colors, cast, and rainbow reflections they make.

The ruby is generally more durable, rare, and valuable than the garnet.