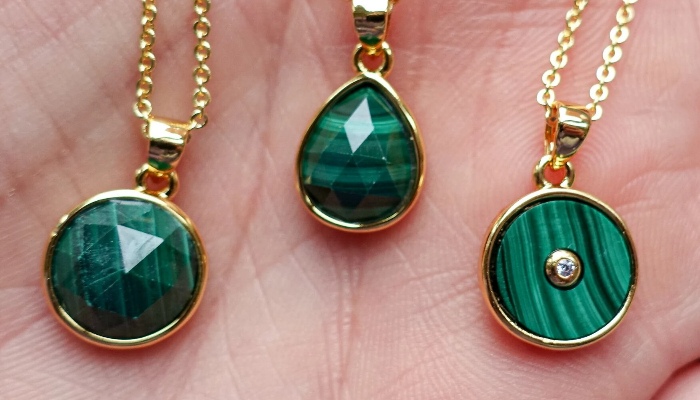 Would you be able to identify malachite jewelry, and can you tell if malachite pieces are real or fake?

If you know about malachite jewelry and own a piece or more, you’d want to ensure that the malachite pieces are genuine and worth the money you spent on them.

This article will take you through everything you need to know about identifying fake and genuine malachite jewelry.

We’ll also share basics on what you need to know about malachite jewelry pieces. So, let’s get right into it!

How to know if malachite jewelry is real 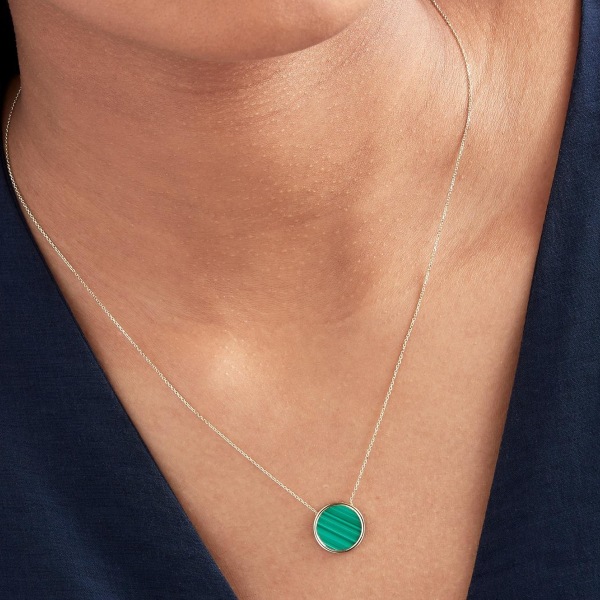 If you come across gemstone jewelry that is sold as malachite, you need to make sure that you can identify this semi-precious mineral gemstone. The best way to do this is by knowing what malachite looks like.

The genuine, naturally occurring malachite boasts a gorgeous assortment of waves, swirls, stripes, and ring, often in black and spanning around the primary green color of the stone.

How, then, do you tell fake from genuine malachite? 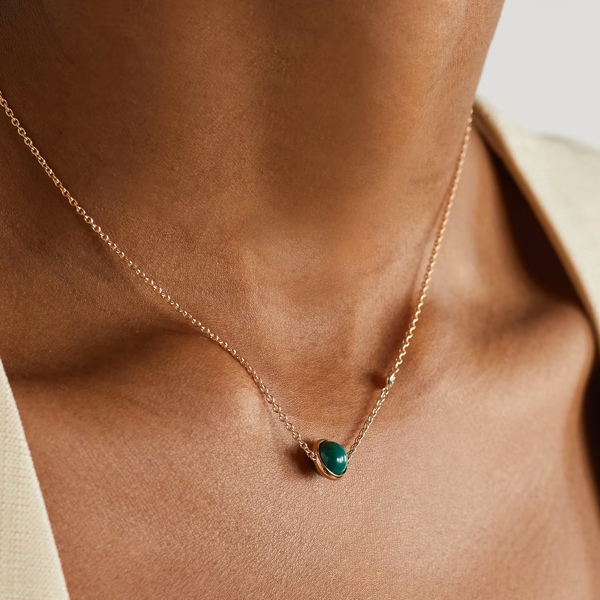 Malachite is one of the most readily faked crystals on the market today, thanks to its being easily replicated. The authentic malachite pieces are made of weathered copper deposits that get oxidized, hence the green color of malachite.

This is unlike the fake malachite pieces, made out of glass, plastic, and in other cases, polymer clay; hence the name manmade, imitation, and faux malachite.

For use in jewelry, the genuine pieces of green malachite are hand-polished and hand-cut, and in most cases, the beads are indifferent non-uniform sizes, and in different shapes. You may even notice the polishing and cutting marks on your genuine malachite pieces. 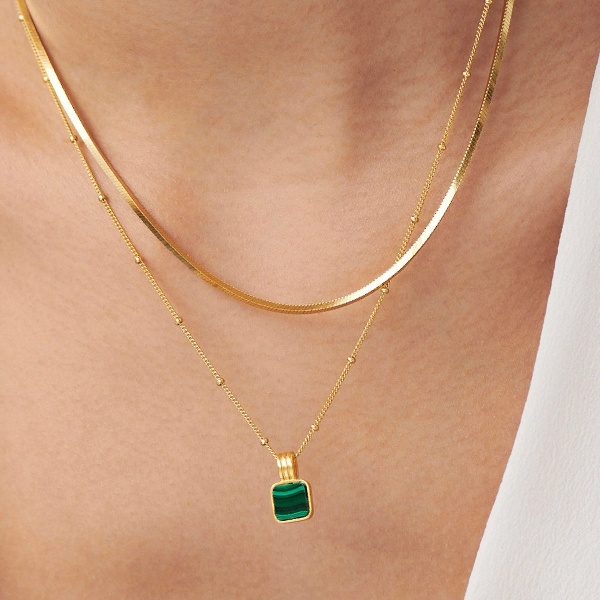 As mentioned above, genuine, natural malachite is basically green in color. However, the colors may range from very pale to very dark green, with waves, rings, swirls, and other stripes that make these gems stand out beautifully.

The other notable difference is that the fake, synthetic malachite pieces are mostly medium green in color, with flat dark lines that create harsh contrasting lines between the medium greens of the fake malachite gemstones.

But that is not all, there is also the fact that the fake gemstones always feature even or uniform dark lines, and these often have 2-4 shades of black or green.

Genuine malachite pieces are free of repeating malachite, and though you will notice a pattern, it is all the result of a more randomized process that cannot be replicated in the lab. 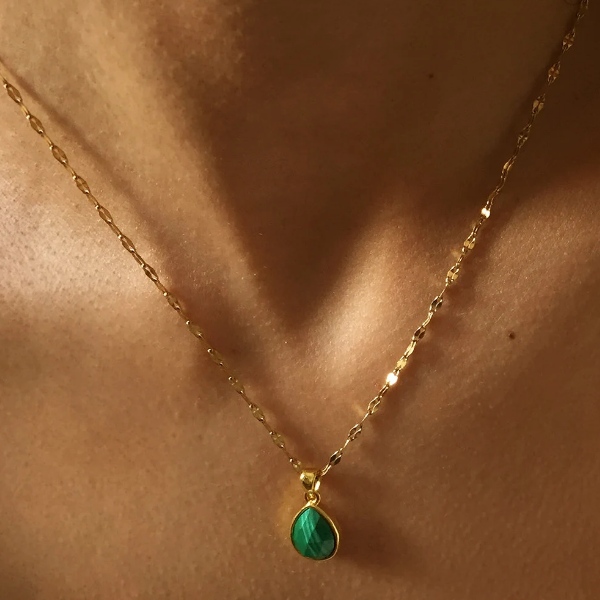 Note that the patterns in the real malachite pieces are often dark green and not black, while the fakes often have black patterns or lines.

But you also need to know that there are varieties of fake malachite crystals which are made out of reconstituted malachite. These pieces are intermediates between the synthetic and the real crystals.

These reconstituted pieces are made of waste or offcuts from crushed genuine malachite gems mixed with resin or dyes and formed back to shape.

So, thanks to the incorporation of resin into the mixture, reconstituted resin would be significantly lighter than real malachite. However, the colors look much more natural, but the patterns tend to be uniform, and in many ways, they don’t look quite right. 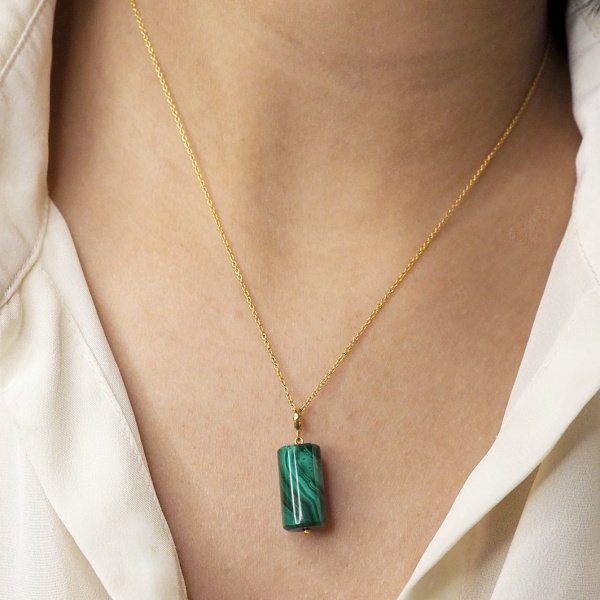 Thanks to the high copper content, real malachite is a significantly heavy crystal, which is even heavier than glass. It is also considerably cold to the touch.

Notably, the malachite imitations are mostly made of clay or plastic, which means that the fakes are quite lightweight. And as you would expect, the fake malachite pieces tend to be warmer to the touch. 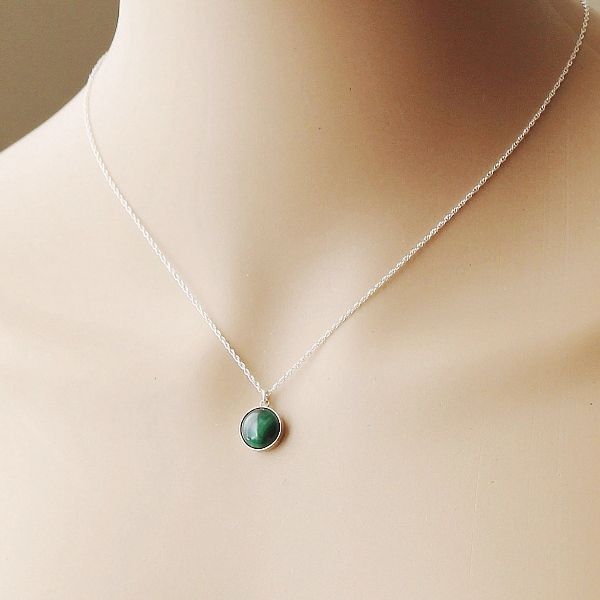 If you place the plastic or polymer beads against your cheeks, they will feel warm because these fake pieces of malachite have low thermal conductivity.

The glass malachite pieces feel ice cold to the touch too, but the presence of air bubbles and the magnification of the glass reveals that the glass is fake. 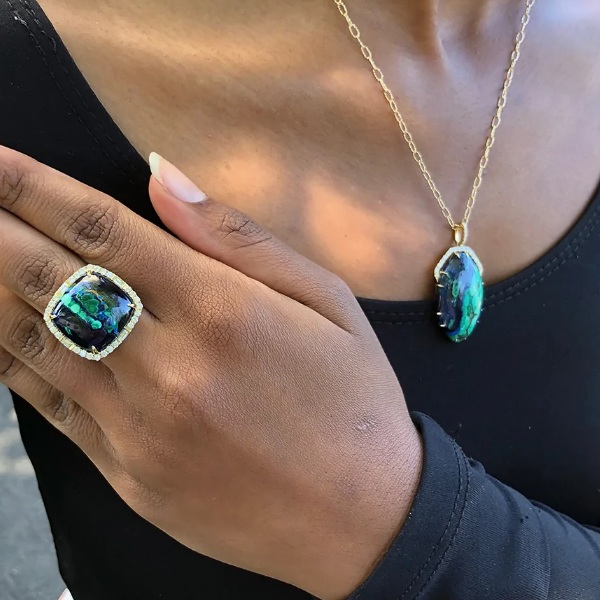 Genuine malachite pieces tend to be dull, especially if the pieces aren’t newly polished, since these pieces are hard and are not polished regularly.

Malachite is harder than quartz and glass. You should also know that malachite crystals or stones tend to be extra sensitive to hot water and heat. They are also relatively stable in light, meaning that malachite looks the same forever and will not lose luster or dull out. 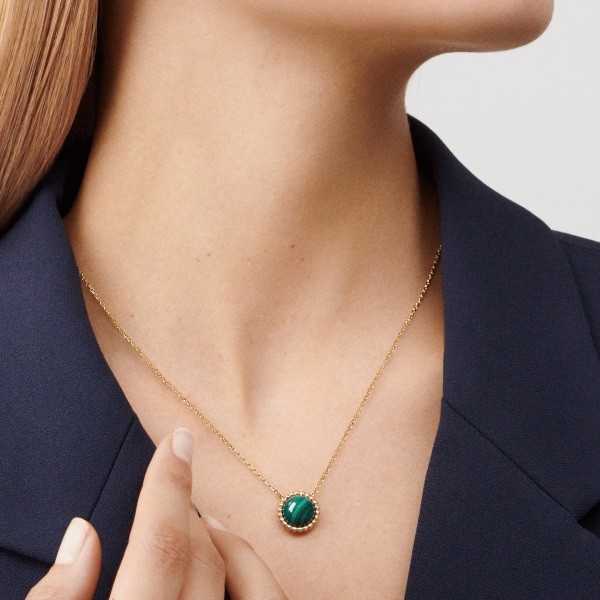 You should also know that despite its natural beauty, malachite is brittle and would turn into powder if deformed.

It feels hard when you squeeze it, but it will be crushed under pressure since it scores relatively low on the Mohs Scale of hardness at a range of between 3.5 and 4. Malachite doesn’t scratch glass. 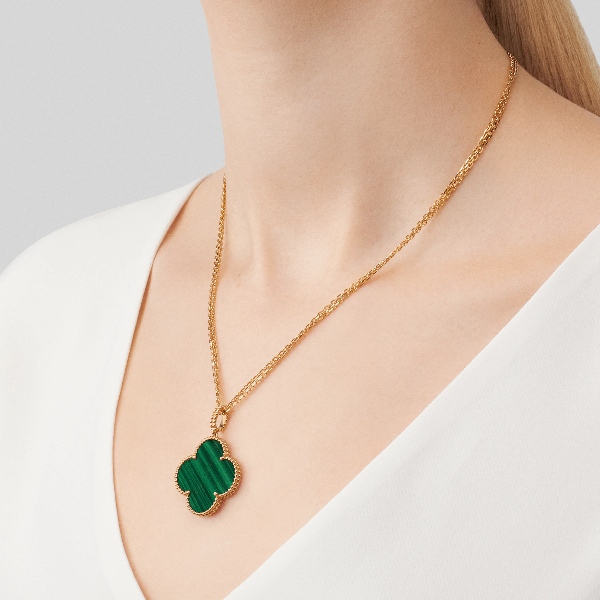 The fake and the reconstituted malachite pieces are pretty affordable, though. 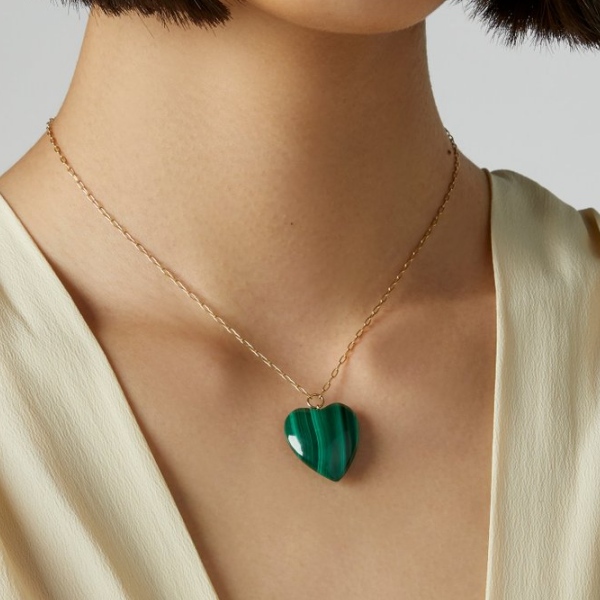 The lines, rings, and stripes on malachite are called banding, and you should know that for genuine pieces of malachite, banding is irregular and non-uniform, meaning that two malachite pieces or beads look very unique from each other.

Also, these bands have speckles on different shades of green patterns; some are thin, while others are thick. 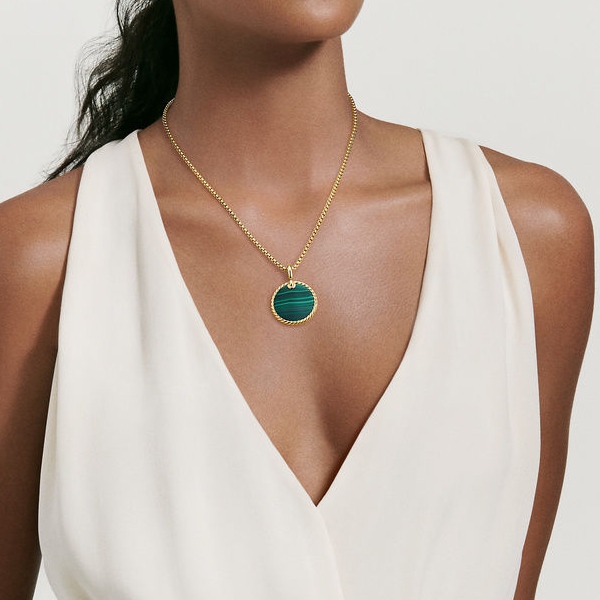 So, it may be in different shades of green, but it’s always green, and if you come across red malachite, you should know that it is an actual fake and that red malachite isn’t really a gemstone. 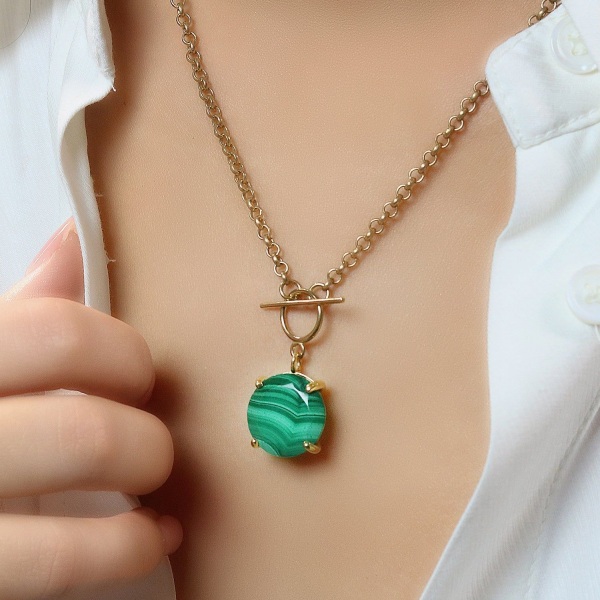 Genuine malachite is formed from copper deposits through weathering, and it’s quite heavy, which means that it won’t sink in water.

The fake malachite pieces made of polymers, plastic, or glass will float. 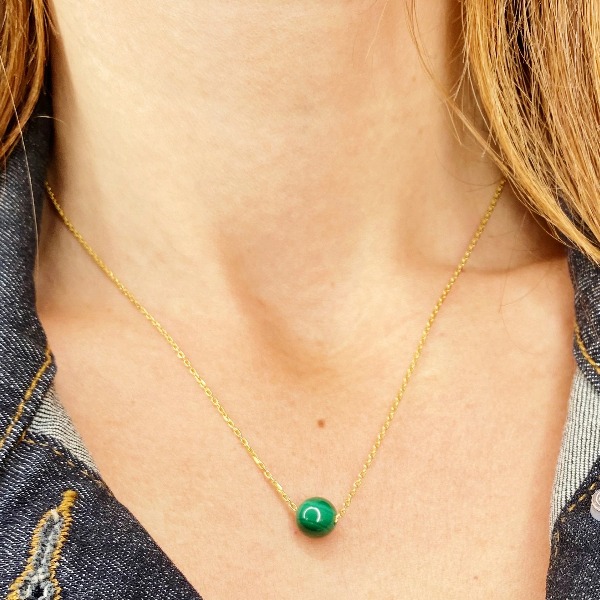 Malachite is a non-metal and non-magnetic mineral, meaning that anything that looks like malachite but is attracted to magnets is a fake.

That said, malachite set in a magnetic metal setting will show some magnetic properties.

Although genuine and fake malachite pieces are primarily green with dark bands, the fake pieces are often designed in medium green and black shades.

They have linear repeating patterns that look very uniform, unlike the authentic malachite crystals that feature more dramatic green colors ranging from pale to soft tones and even deep and dark green shades.

So, in many ways, the genuine malachite pieces contain a large assortment of gorgeous, non-uniform patterns that looks like stripes, rings, or swirls running throughout the stones. Fakes look too good/perfect to be true.