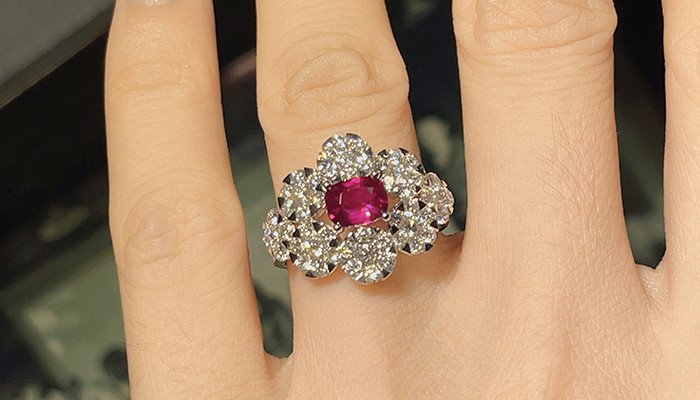 Rubies are known for the deep, very vivid, and almost ‘stoplight’ red color.

The vivid red color of the real ruby has also been described as a pigeon red color, which also points to the bright but deep red hue of the ruby.

Unfortunately, people still confuse the real ruby with the fakes, and a number of people end up with fakes despite paying the full or close to the full price for the real rubies.

And so, it is important to know what the real ruby looks like and how to tell it apart from the fakes. And with the color of the ruby being the primary identifying feature of the ruby, it’s worth noting that the fake rubies tend to have a duller red color, and though they have a light red color, they aren’t as bright as you’d have hoped.

Also, the real ruby is not as dark red as you may think, and if the gemstone in question has a very deep red hue and not a medium hue, then it’s likely a garnet and not a ruby. Some rubies will have a darker hue, though, meaning more tests are necessary for the identification of this gemstone. 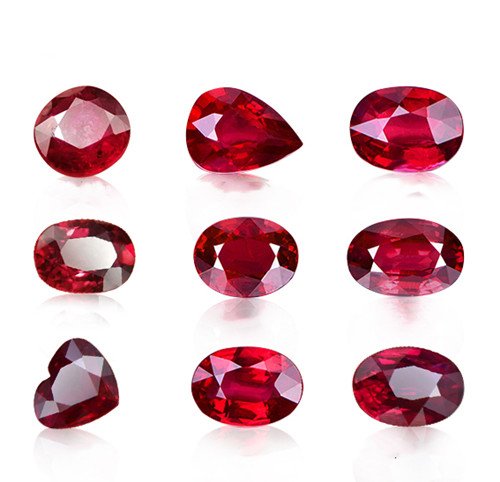 As one of the most expensive and highly sought-after colored gemstones, the ruby might be on your radar. But you need to know that you know what to look for in an actual ruby and how it looks like.

As one of the hard and durable gemstones that is resistant to scratching and also its high-prized deep color that is associated with love and passion, the ruby makes a huge symbolic statement, and you need to get an actual ruby.

You will be happy to know that this article guides you on all you need to know about ways of identifying and determining the quality of the ruby. So, let’s get right into it!

How To Identify Ruby Quality – 4Cs

These 4 elements of quality of the ruby are important for determining the quality and the value of the ruby because, as a colored gemstone, the ruby doesn’t have just one universally acceptable quality standardization method.

At the same time, the metrics for determining the quality of the ruby are not balanced in the same way because for the ruby; color is its most important quality.

Below, we explore these 4 elements and how they affect the value and the quality of the ruby. So, let’s get right into it! 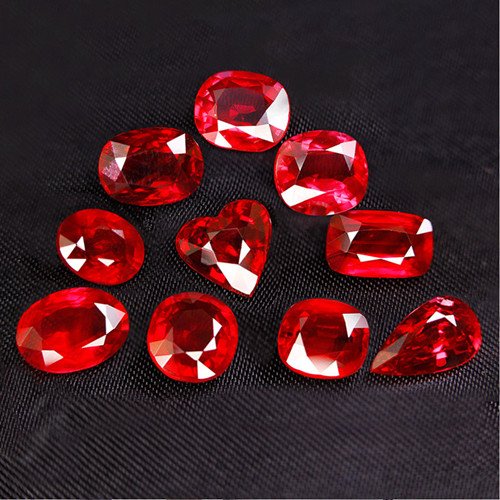 The color of the ruby is, as mentioned above, the primary quality that guides in the determination of the value of the ruby.

And in ancient Indian Manuscripts, the color of the ruby has been classified into distinct color groups, including saffron, China Rose, Partridge eyes, and Pomegranate.

Then you have the finest of rubies, the Burmese rubies that are described as the rubies with the Pigeon’s blood color; this is the case, despite the fact that these rubies are found in Madagascar and in Mozambique.

These variations in the descriptions of the Ruby point to how the gemstone has different qualities, and most important different versions of the ruby have different values.

Below, we’ll take you through everything you need to know about the importance of the color of the ruby, what different tones or hues of the ruby color mean, and how a real ruby is different from other forms of red-colored gemstones.

So, what’s the color of the ruby, and what color elements determine the value of the ruby?

The ruby’s most ideal color is a vivid, medium-dark red color, and in other cases, a slightly purplish red color. But there are many other factors in between that point to the perfect ruby. The factors that determine the color of the ruby include the hue, saturation, and tone of the gemstone. 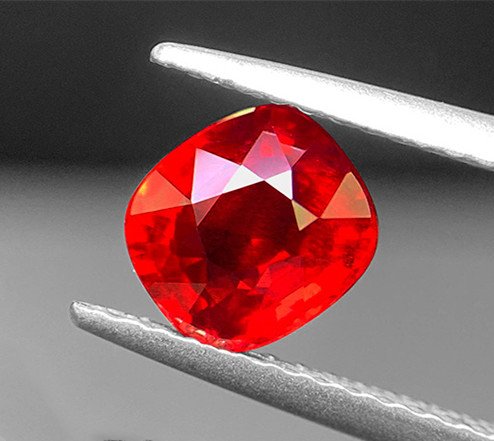 The hue of the ruby describes its basic color. So, in as much as the ruby is basically a ‘red’ gemstone, red is only the primary color of the gemstone, and other colors like orange or purple are hues that the ruby may have, and these are the secondary colors.

Ideally, the ruby comes in the absolute red color, and this is the case with the finest rubies; however, most of the rubies are hued. The rubies from Myanmar, for example, have a slight purple-red hue.

Most other rubies from other parts of the world carry the purplish hue, and most of the rubies on the market today carry the purple or orange hue. That said, rubies that show a predominance of the secondary color are not valued as highly as the ones with more of the red primary color.

That said, there is endless debate around the color of the rubies and the boundaries used in the gemological industry, which is why you can only determine the exact color of the gemstone when you have the actual piece in your hand.

In the lab, this corundum gemstone’s color and the grade it falls into is determined using a number of master rubies in different colors or hues, and this makes it possible to determine if the ruby is actually a ruby or maybe pink, orange, or purple sapphire.

It also means that the hue is not enough to accurately identify the stone, and this is where the other qualities, tone, and saturation come in. 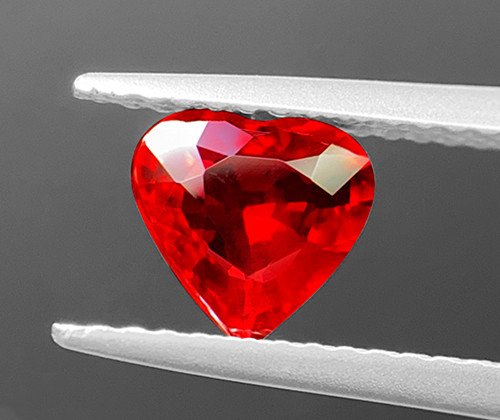 This factor points to how dark or light red the stone is. The finest quality rubies carry a medium to a medium-dark red tone.

Also, regarding the tone of the ruby, this gemstone’s red tone shouldn’t be too dark such that the secondary colors are completely obscured, but also, it shouldn’t be too light so that the red color is indistinct or diluted.

The differences in the tone of the ruby is why some of the Thai rubies are considered garnet reds because of the very dark red tone of the gemstone. If. On the other hand. The gemstone is too light; it’s considered a pink sapphire, even with a high red colors saturation.

As the third factor that guides in the determination of the color and the value of the ruby, saturation is the term used to describe how intense or pure the color of the ruby is.

Saturation is, therefore, the key component in the determination of the value of the ruby. If a ruby has a high level of saturation, it means that it has trace amounts of chromium, and this gemstone would still have high levels of saturation without being dark.

In addition to the tone, saturation, and hue of the color red that determine the value of the ruby, there are other color-related elements that affect the value of this gemstone.

In addition to the color, the value of the ruby is also determined by its cut, which is why the most skilled gem cutters will fashion rubies in a way that will maximize the pieces’ color zoning, brilliance and also allow the stone to exhibit the best of its pleochroic color.

The star rubies will, for example, come in various shades of red and pink. Even so, the vivid and medium-dark red ruby remains the highly sought-after version of the ruby, especially if it’s a transparent faceted stone.

The star rubies are also highly valued because they have a lot of silk but hardly attain the saturated red and bold color of the more transparent stones. 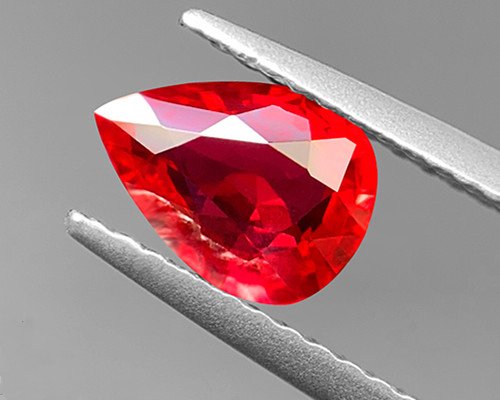 Rubies don’t have the highest clarity level or nearly the same level of clarity as fine diamonds.

This is primarily because rubies have many inclusions, and even the most expensive ruby has inclusions – the inclusions will be seen even at 10X magnification power. So, you should be suspicious of ruby if it has no inclusions because it could be a glass imitation or a synthetic stone.

That means that the best grade (clarity) of the ruby is the eye-clean piece that has no inclusions but only to the naked eye.

Experts evaluating the ruby will, therefore, determine the value of the ruby by taking into account the number, size, location, and visibility of the inclusions.

Note that the inclusions are expected in the ruby because they represent a natural consequence of crystal growth, and the inclusions will vary depending on the origin or the source of the gemstone or even its treatment history.

Note that that Cabochon silk cut ruby had reflections from the rutile needles that form the 6-rayed star. Rubies rarely have 12 rays, and a doubled effect would be from hematite needles present.

But as mentioned above, the most valued rubies have more of a transparent star. Also, if a ruby is treated, it will have degraded silk and inclusions, which is something you need to take into consideration.

5-carat rubies are quite valuable, and the value of the ruby increases with the stone’s weight.

That said, the fine quality rubies weighing more than 1 carat are quite rare, although you can find these in commercial quality.

The cut of the stone describes the stone’s shape or its faceting style, but it could also point to the stone’s finish or proportions. The transparent finish cut stones are more valuable because they reveal the beauty of the stone.

The cut of the stone notwithstanding, the best-cut stones show the hues of the stone, and they also have the highest level of brilliance. 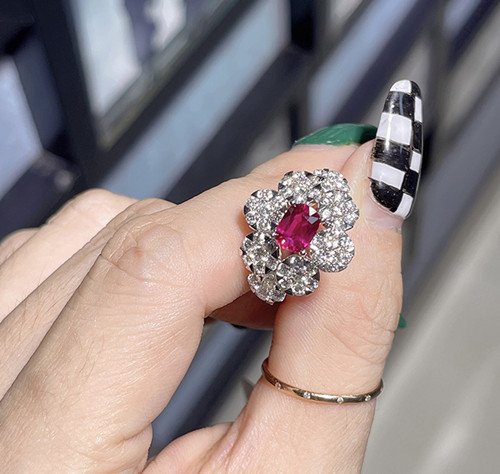 How can you tell if a ruby is real at home?

The ruby is a rare, highly sought after, and also one of the most expensive gemstones.

The real thing has a vibrant/ vivid medium-dark red color, with an orange-red or purple-red hue.

It also has inclusions and perfect cuts.