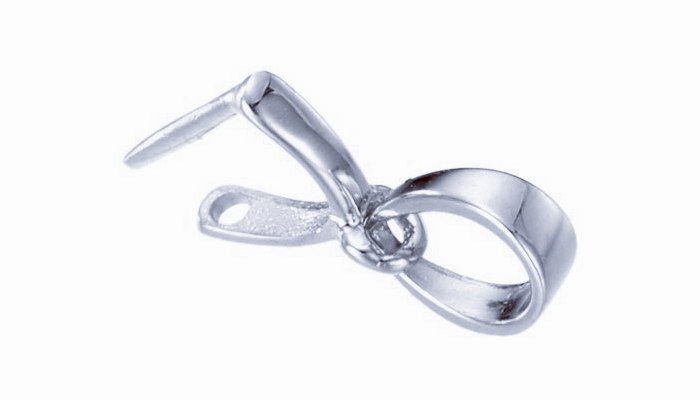 A bail is a jewelry finding that boasts a high degree of versatility, transforming your beads, flat-backed elements, and other parts, forming a pendant for a necklace or even a drop.

The bail boasts an expandable design, which means that it allows for ease of use with no need for more mechanic processes like soldering or metalsmithing.

For use with necklaces and other kinds of jewelry, the bails come in different sizes, shapes, and styles, and they are also made of different materials.

The most common bails used for necklace pendants are, however, made of materials like brass, sterling silver, pewter, and in other cases, precious metals like gold. But how do you attach the bail to a pendant?

What is the bail of a pendant?

A bail or the bale of a pendant is an important jewelry finding that is used to attach to pendants or stones.

This bail goes to the center of your necklace from whether the pendant hangs.

In the most classic examples, the bail makes it possible for the necklace chain to pass through it from where it is connected to the pendant using a ring.

How to attach a bail to a pendant: Step by step guide

To attach the bail to the pendant, you should know that there are different kinds of pendant bails, and these work differently.

Below is a look at some of the pendant bails and how you can attach them to the pendants. You guys can watch the video first!

This type of bail works well for the pendants with smaller holes at the top of the pendants made of materials that can be drilled easily and narrowly.

You’ll need the screw-style bail that looks like a screw-eye, the one that has a threaded end as well as loop at the top. There also are fancier options that will add a higher level of elegance to the framework instead of the simple hooked loops.

For this, you need to insert the screw end of the bail to the top of the pendant then twist the bail to secure it in place. You could use a drop of epoxy glue at the screw’s tip if you are worried about the bail falling out before inserting the bail in the pendant.

This type of bail is designed to connect to the donut or the washer-style pendant. The bail features a back and end, meaning that you can pull it to appear slightly, sliding down your pendant between the jaws. Once it slides in, you can press the bail closed, securing the pendant in place.

Next, you’d have to attach the bail to the necklace, and to do this; you’d have to run a chain or string through the top part of the bail.

Alternatively, you could pass it through the jump ring, going straight to the top of the pendant bail before you attach your jump ring to your necklace.

How to attach a bail to a stone pendant 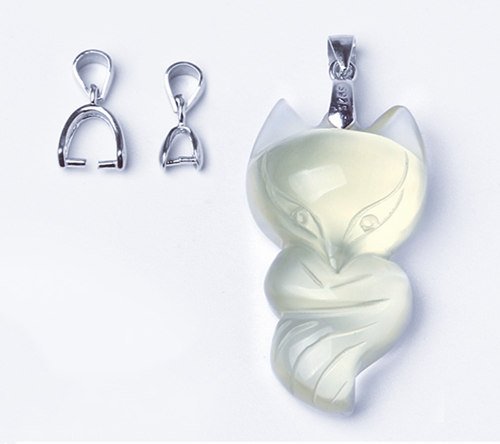 You’d need a pinch bail for this, preferably one made of sterling silver.

How do you do this?

First, make use of the needle or the chain nose pliers to open the pinch bails gently, then slip your pliers into the pinch bail, exerting pressure from inside, avoiding marks on the sterling silver piece.

Now, slip bail prongs into the pendant hold and then press closed the bail, gently – just grip the bail on the top section, exerting pressure. With the pliers positioned in the bail’s widest part, the prongs will hold the pendant securely, as long as you don’t pinch the pliers on the bail’s decorative part. And voila, your pendant is secure.

How to attach a bail to a resin pendant 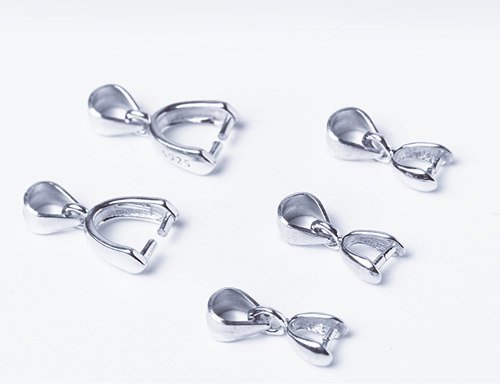 To use glue like E6000 to a resin pendant or the glue-on pendant nails for the custom pieces of glass pendants or other types of flat-back pendant options into beautiful pendant necklaces, you will need the pendant-style bail. This bail will ensure a flush design and attachment of the pendant, and the piece would look great from back to front (or vice versa).

In most cases, the front end/ surface of the glue on resin pendant bail will be textured, which is an important feature that ensures stronger and more secure bonds to be formed between the pendant and the bail. So, to prepare the pendant, you need to clean it first to get rid of skin oils, fingerprints, and any other finishing products or foreign materials.

You may want to sand the back of your pendant, specifically where the bail is to attach to on the roughed-up surface. This also helps in ensuring a strong, secure bond.

Apply your epoxy glue on the textured surface of the bail, making sure that there is adequate adhesive to coat the entire area of the pendant.

Now, turn over the bail and position it over your pendant where you want to attach it to the pendant—once done, press on the bail to ensure that it stays in place at the back of the pendant. Hold the pieces in place for about 2 minutes, then set them aside, allowing the glue to set completely. You could also remove the excess glue from the attachment point.

After it has cured completely, string a cord or chain through the bail’s opening to finish setting it.

These are some of the ways of attaching bails to pendants securely. If you needed help with your project, this content hopefully helped.