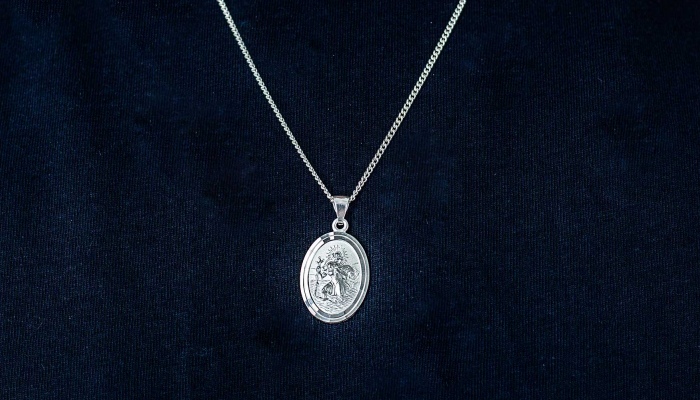 However, it has religious connotations attached to it, and you may be wondering if you must belong to a specific religion to wear the Saint Christopher medal necklace.

This article will guide you on everything you should know about the St. Christopher necklace and who wears it. So, let’s get into it!

The Meaning of the Saint Christopher Medal 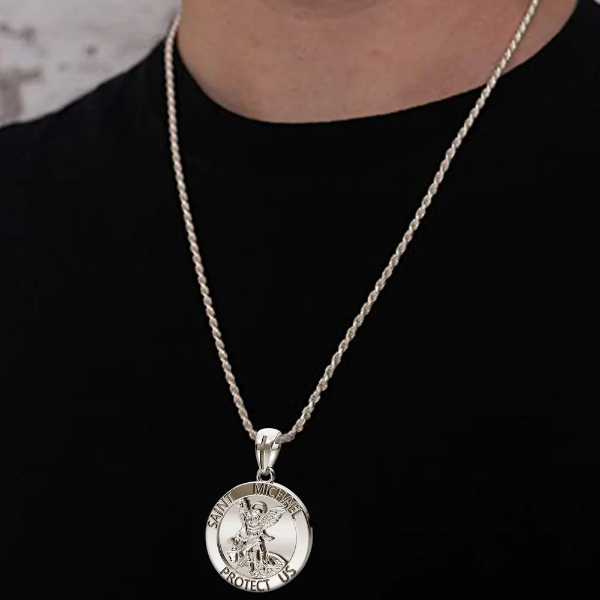 The infamous legend of St. Christopher is a heartwarming story that has been down generations for many centuries, and like any other legend, there is some mystery involved in it, although this story is the most believable one and is why St. Christopher is deemed the patron saint for travelers.

Also notable is the fact that the patronage of St. Christopher spreads far and wide, and wearing the medal is considered a form of protection to different travelers and explorers, including drivers, mariners, sailors, surfers, and all other travelers. St. Christopher also stands out as the most popular Christian medal.

That said, wearing the medal of St. Christopher carries different meanings, the most common being the belief that the medal is a symbol of safe travel, whether worn as a necklace or as part of a keychain. 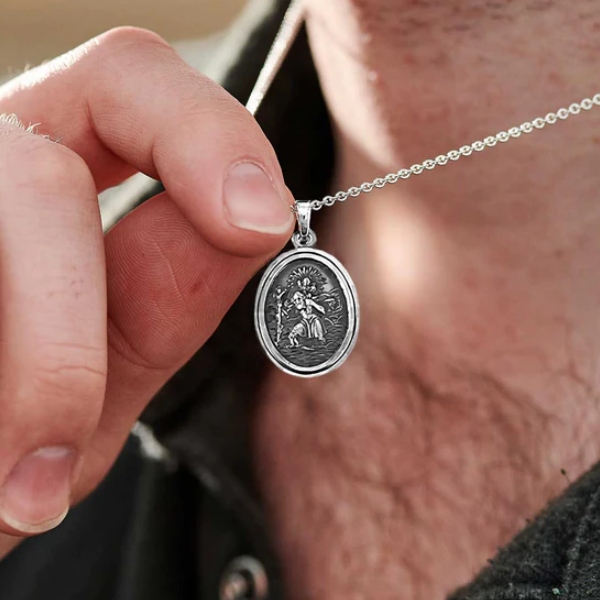 The medal is available in different colors and styles, but its main style feature remains the fact that it depicts the legend of St. Christopher – the circular medallion is a portrayal of a large, beaded man holding a white staff as he carries a young child on his shoulders across a raging river.

Additionally, the edges of the medal are inscribed with the words “St. Christopher Protect Us/ Be My Guide,” so wearing the medal is a way to show your devotion to the saint while also seeking his protection when you’re traveling.

It’s also become an important representation of adventure, of overcoming different tumultuous obstacles, and you could also wear it for your safety as a talisman. 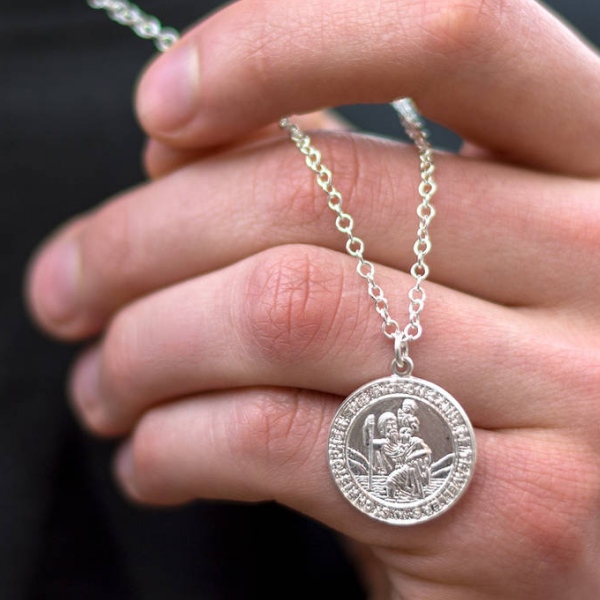 The legend of Saint Christopher has been recounted numerous times in scripture and in countless paintings. There also are many religious concepts in which St. Christopher was a popular art subject, especially during the renaissance.

In all these depictions, St. Christopher was depicted as the patron saint of travelers. Some artists that showed St. Christopher include the infamous Italian and Dutch painters Giovanni Battista Piazzetta and Hieronymus Bosch.

Can a non-Christian wear a saint Christopher necklace? 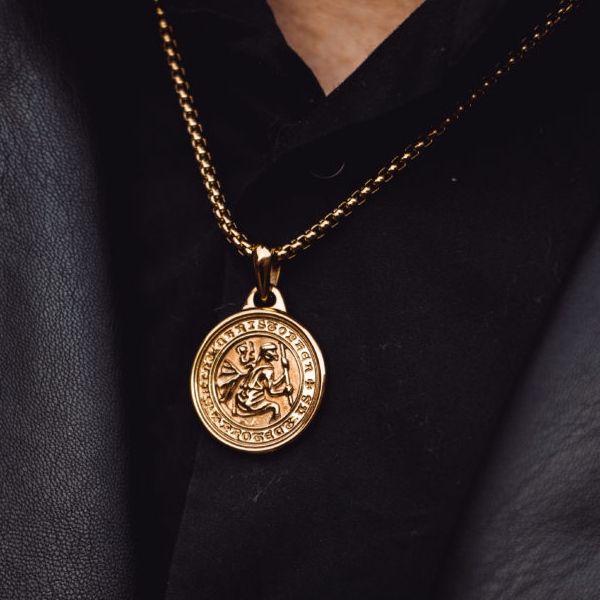 Thanks to its powers and meaning, anyone can wear the medal of Saint Christopher, and you don’t have to be Catholic or a Christian to wear it. All you need is faith that this talisman will protect you.

In the past, different people from the most diverse backgrounds have worn the medal necklace of Saint Christopher as a medallion that symbolizes protection and safe travel.

And since its creation, wearing the medal has saved wearers from the deadliest water deaths and ensured their safe passage at sea.

Do you have to be catholic to wear the saint Christopher necklace? Why? 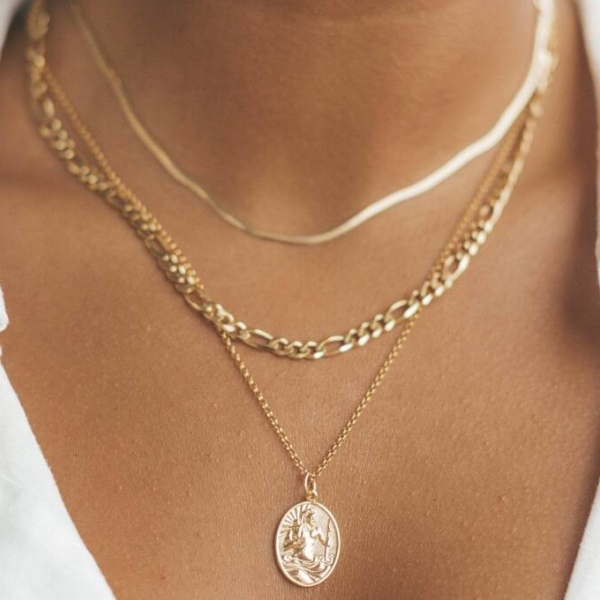 You don’t have to be Catholic to wear Saint Christopher’s medal or partake in the traditions or beliefs associated with this necklace. There is no rule dictating who is allowed to wear the St. Christopher necklace and who isn’t.

All you’d need is faith that the medal will protect you, and perhaps you should respect the medal because it is often blessed and powerful, offering great graces to everyone who believes in its power. St. Christopher’s medal continues to gain popularity among non-Catholics today because it’s become a great symbol representing the power to overcome obstacles and go out on different adventures.

Through all these, the medal serves as a talisman that offers safety to the person that wears it.

What does St. Christopher protect you from? 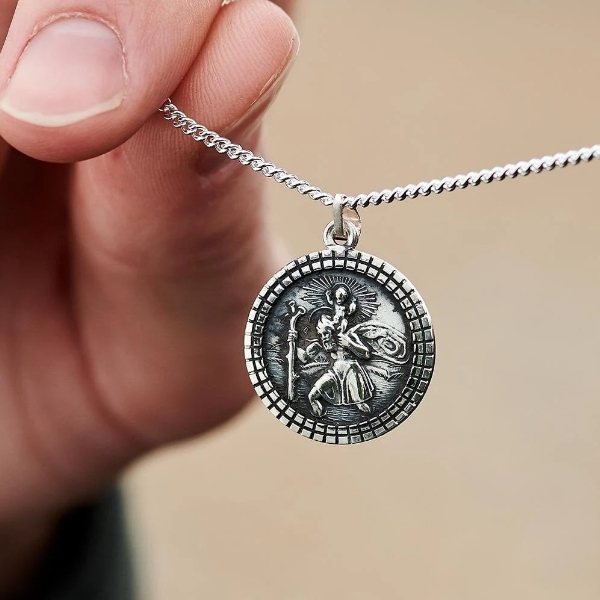 Saint Christopher protects anyone who wears the necklace from harm or accidents when traveling, especially on water bodies, although the saint will protect you even when on adventures on land. St. Christopher’s story about him crossing the river with a child on his shoulders – the child was later identified as Jesus, made his recognized as the patron saint of all travelers, and having his portrayal on the medal symbolizes the protection that travelers get from wearing the medal, especially when traveling.

I. Wear the medal as a pendant necklace 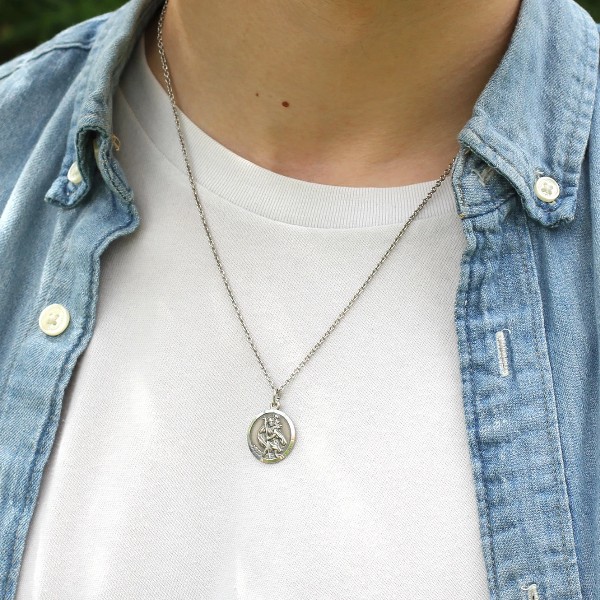 For anyone interested in wearing a necklace with the medal of St. Christopher, it is recommended that you wear it as you would a necklace pendant, whether you are Catholic or not.

Since the medal is designed in sterling silver or gold, you can wear it as you would any other accessory, with casual and even formal wear, over or under your top.

When using it to accessorize your everyday wear, you can wear it with anything that looks good on you, from a simple t-shirt to a printed crop top with jeans or even with a dress.

II. Wear the medal as a charm bracelet 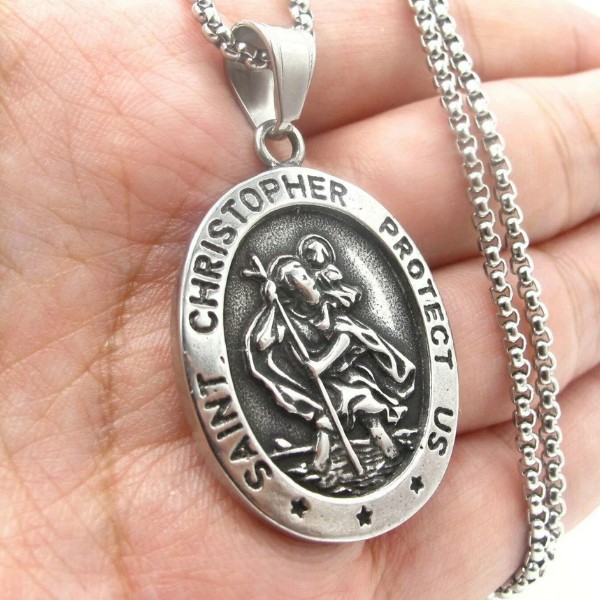 Since most of the medals are relatively small, you could buy them as a charm to be incorporated into your charm bracelet. Seeing it on your wrist often will remind you that someone is watching over you.

III. Wear it as a statement necklace 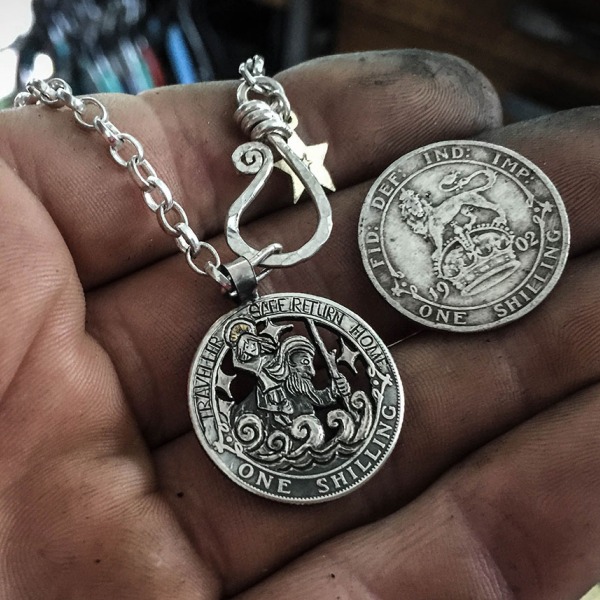 Some of the medals come in bigger and much bolder designs, making great necklace pendants and making a long necklace stand out perfectly.

You don’t have to be Catholic to wear St. Christopher’s medal, and as long as you believe it will protect you, it will.

It also looks good, and even if you don’t believe in its power, it makes a great religious medal if that is what you are currently into.