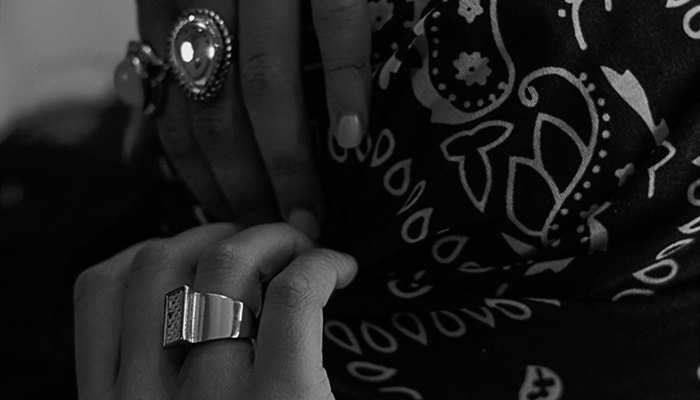 Cocktail rings could be on the list of the types of rings you may have heard about, but have you heard about or know the meaning of dinner rings?

So, read on to learn exactly what the dinner ring is and what it’s for.

Dinner rings definition – why is it called dinner ring?

The dinner ring is a less ostentatious vintage-style ring that is just as beautiful or even more beautiful than the statement cocktail ring.

The dinner ring is, as the cocktail ring, large and rather elaborate. It’s made with either a single large stone or a cluster of stones. And as the name suggests, the dinner ring is ideally worn for evening and afternoon occasions.

Dinner rings often come in an authentic Art Décor style dating back to the 1920s. The rings are breathtaking, to say the least, and it’s the reason these rings are adored, and they stand out to date.

Picture this – an Art Déco style North or South Ring with two similar or fraternal twin diamonds, each weighing at least 2 carats, with the highest level of clarity and bezel settings that sits the stones right at the center of the ring. Stunning, isn’t it? Well, this is the simplest representation of a dinner ring and why you may want to own one.

So, how did the dinner rings come to be?

The dinner rings are said to have made their debut in the fashion and jewelry scene at the height of Prohibition, which is also the time when the cocktail rings became popular. The dinner ring became a thing alongside speakeasies, cocktail parties, and flappers. At the time, alcohol was banned, and drinking became something that was done undercover. These illicit soirees were, therefore, conducted in underground, dimly lit venues. This also attracted and gave birth to a specific dressing style – think short, sexy cocktail dresses, often adorned with the best of shimmering sequins, sexy black Kohl eyeliner, dark red lipstick, and very long red fingernails. Along with this fashion came the long cigarettes, the cocktail glasses, not to mention the now ubiquitous cocktail rings.

The cocktail rings can only be described as glamorous, over-the-top jewelry creations that would shimmer and sparkle in these dimly-lit venues. And as far as most of the wearers were concerned, the bigger, the better. But the Prohibition law notwithstanding, these rings would also be worn as a form of revolution. Women would buy these rings for themselves to show their liberation and for them to assert their status in society as independent, powerful women.

But as times changed and after the Prohibition Law/ Ban was lifted, the cocktail rings would gain a new type of prominence. From the 1930s through to the 1950s and 1960s, the cocktail parties had turned into extravagant dinners – hence the start of the Dinner Ring Era.

These dinner rings were, like the cocktail rings, large and very glamorous. However, something that stands out from these rings is the fact that the adornment with diamonds now played second fiddle as the rings were adorned with some of the most stunning colored gemstones. The dinner rings would be adorned with massive garnets, emeralds, citrines, and aquamarines that took center stage on the wearers’ fingers, albeit surrounded by the sparkling diamonds in a halo – mostly the wives of the most powerful leaders both in politics and business.

The dinners attended were always high-class affairs where the women would attend in their men’s arms – the men could be business partners, lovers, or husbands. And as women took up more prominent roles in both the business and the political fronts, and as they asserted themselves as some of the most independent agents of power, the dinner rings only continued to be bold and brassy – with the ‘bigger the better’ remaining the guiding motto.

The Dinner Rings can, therefore, be said to be women’s most brazen symbol of power and freedom. Think of it this way – ever since the rejection of the corsets, women found freedom in fashion, and they loudly loved it.

With these two types of rings seemingly having a lot in common, how do they differ from the cocktail rings?

If you are planning for a cocktail or dinner party and the only way you will be showing up as is the class that’s dressed to the nines, you must throw in a cocktail or a dinner ring.

Unfortunately, it can be a little challenging to differentiate these two types of rings because they look like they morphed into each other in a way.

The main difference between these two rings, however, is that the cocktail rings debuted in the 1920s at the height of the Prohibition when alcohol was banned, forcing people to hold parties in secret, mostly underground. This was also the time when a lot happened in society for women as women were given the freedom to vote. As expected in any revolution, outlandish, (highly secularized?) fashion took hold. Whichever way you look at it, this was the time for women to be seen and heard.

The cocktail rings were, therefore, a symbol of rebellion – allowing women to showcase their independence. It also marked the arrival of cocktail drinks, which were done to help with the taste of the rather awful-tasting alcohol of the time. The drinks gave rise to the cocktail glasses, and consequently, the cocktail rings. The best of the cocktail rings were the biggest and the brightest, and they also were used as a sign of wealth and a personality measure.

So, if you aren’t sure about the differences between cocktail and dinner rings, you will be happy to know that while the cocktail rings are worn to cocktail parties primarily, the dinner rings are more often worn to more elegant dinner parties.

Should you buy dinner rings?

Yes, although the dinner rings aren’t as popular as the cocktail rings, dinner rings are stunning, stylish, and elegant; and you may want to buy a dinner ring if you are into glamorous fashion and don’t mind some color on your fingers.

Dinner rings are synonymous with the end of the Prohibition and the rise in the number of elegant dinner parties that replaced cocktail parties.