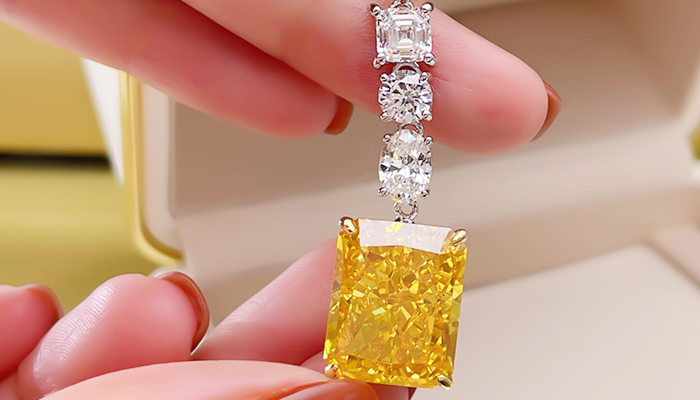 The Oscars, Grammys, and Golden Globes present the perfect platform for jewelers and goldsmiths to showcase their masterpieces. The expensive pieces are then paired up with expensive designer outfits and worn by some of the most famous models, actors and actresses.

The Tiffany Diamond better known as the Tiffany Yellow Diamond is one of the largest Yellow Diamonds that has ever been discovered. And has only been worn by four famous women including Audrey Hepburn, Beyonce Knowles, Lady Gaga, and Mrs. E.Sheldon WhiteHouse.

Of the four famous women, we zeroed in on Audrey Hepburn as we seek to establish whether she really rocked the Tiffany Diamond and on what occasion did she wear the expensive jewelry. 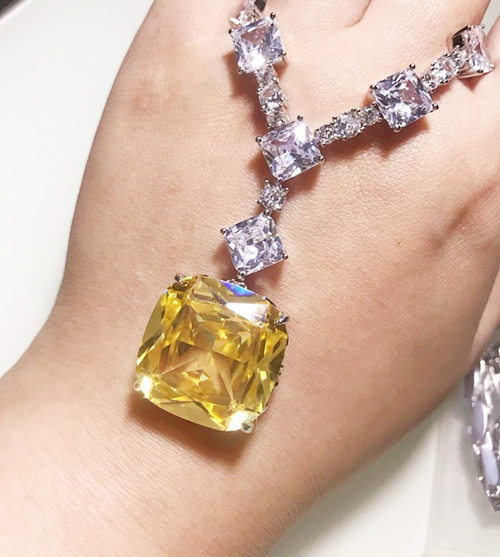 Audrey Hepburn was the second woman among the four mentioned, to have worn the yellow diamond. At the time the diamond had been set on a ribbon-styled necklace.

Notable is that on the various occasions that the Tiffany diamond has been displayed to the world, it was usually paired and set on different neckpieces, to enhance its overall beauty and also to make it more appealing to its new audience.

According to history books, the diamond has been set at least four times, once in the Ribbon Rosette necklace back in 1961, and was also placed in a necklace with over 100 carats of white diamonds back in 2012.

Tiffany’s diamond was paired with Schlumberger’s Bird on a Rock. The Diamond has been the property of Tiffany’s for over 130 years after being purchased from Kimberley diamond mines in South Africa. It was then taken to Paris where it was customized to enhance its yellow color.

Tiffany & Co. founder Charles Lewis Tiffany acquired the rough stone which weighed 287.42 carats for $18,000?  The diamond is supposedly on sale and was recently revealed in Dubai as an integral part of Tiffany’s Blue Book event. 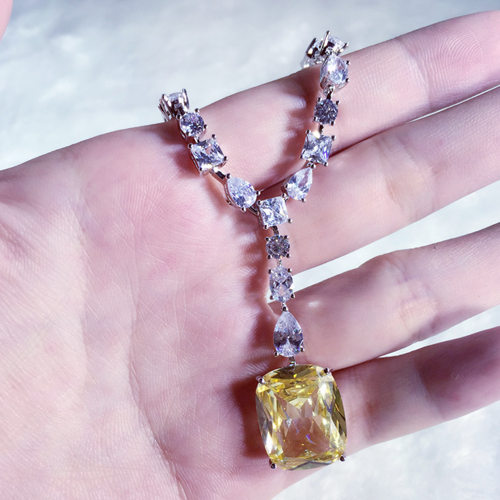 The house has however remained mum about the price of the diamond but gemologists among other industry experts believe that it will retail for $30 million.

Attempts by Tiffany & Co. to sell the yellow diamond have proved futile in the previous year thus most people are still skeptical if it will sell this time.

The elusive gem was put on sale back in 1972 and to reach the masses an ad was put in the New York Times, where the company was offering the diamond for $5 million.

However, the sale only ran for 24 hours thus anyone who wished to own the exquisite gem had to act within the diminishing window of time.

And as you might have guessed, the world’s billionaires were not interested in the yellow stone and that is how it ended up being a permanent property of Tiffany’s jewelry archives.

When did Audrey Hepburn wear the Tiffany diamond?

Audrey Hepburn wore the Tiffany Diamond, back in 1961 when appearing for promotional shots for the film “Breakfast at Tiffany’s.”

What necklace did Audrey Hepburn wear in Breakfast at Tiffany’s? 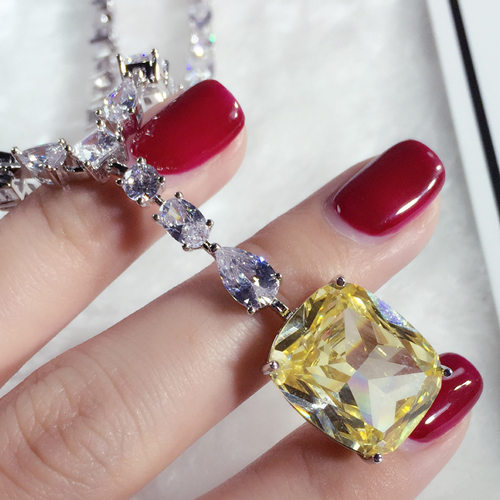 When Audrey Hepburn first stepped out of the taxi on Fifth Avenue, when shooting the first scene of Breakfast at Tiffany’s back in 1961. She was wearing a black dress and had paired it up with a big costume pearls necklace.

Audrey Hepburn never wore any of Tiffany’s pieces when appearing in the film and the only time that she wore one of Tiffany’s jewelry was when she was posing for the promotional photographs just after she was done filming the opening sequence.

Audrey Hepburn brought out the beauty of Tiffany’s Diamond, she also put the fifth avenue store on the map as many young women traveled to take photographs and shop from the store.

Other celebrities who have worn the Tiffany Diamond

After Audrey Hepburn wore the Tiffany Yellow Diamond while taking the promotional photos, Lady Gaga was the next famous celebrity to adorn the expensive piece of jewelry. Her wearing of the gem was in honor of Tiffany’s 175th anniversary back in 2019. 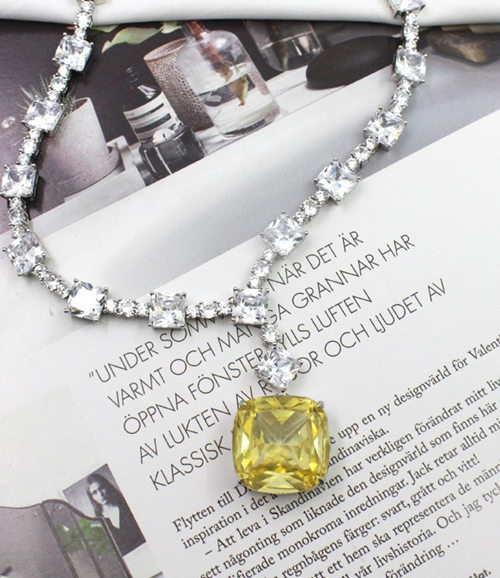 Notable is that before Audrey Hepburn wore the Tiffany Diamond after it had already been worn by socialite Mary Whitehouse. Who appeared with the lavish necklace at the 1957 Tiffany Ball held in Newport Rhode Island.

In recent times Tiffany’s yellow diamond was worn by Beyonce and who happens to be the first black woman to wear the much-coveted gem.

Unlike Audrey Hepburn, Beyonce did actually wear the yellow diamond, while running the new campaign for Tiffany and Co with husband Jay Z. She comes in as the fourth woman to wear Tiffany’s yellow diamond across the globe.

Is Tiffany Diamond the most expensive jewel worn to the Oscars?

Tiffany Diamond is the second most expensive jewel to have ever been worn to the Oscars. The first jewel was the Blue Harry Winston Diamond Necklace. The neckpiece had a high price tag of $20 million. 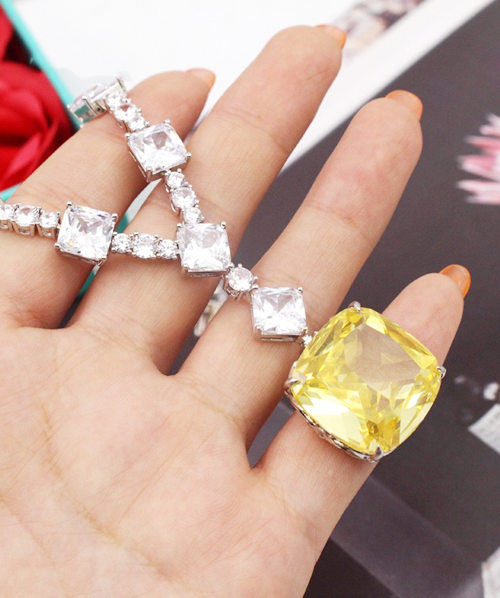 How can I afford a Tiffany Jewel?

If you wish to acquire an authentic piece of jewelry without compromising on quality then you can shop the pre-owned jewels, which are usually polished and refurbished to perfection.

Tiffany Diamond remains the property of Tiffany & Co, attempts to dispose of it back in the day failed. But we do hope that it will finally get a new owner with the impending sale.

The expensive jewel has only been worn by four women, while a replica of the exact same jewel made by Tiffany & Co. was worn by Gal Gadot. While featuring in the 2022 film “Death in the Nile.”

Individuals who are therefore interested in the Tiffany Jewel and cannot afford the original. They can pay and have Tiffany & Co skilled and experienced masters make a replica with the exact shapes and dimensions.