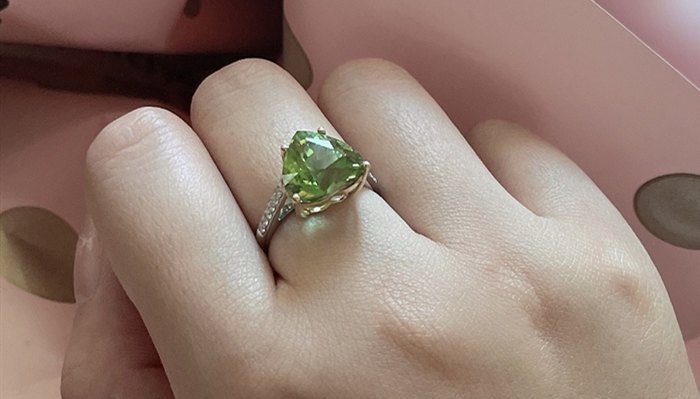 Don’t you wish there were designated accessories for all kinds of events? Imagine how easy it would be to accessorize without having to worry about committing some sort of faux pas or getting that weird out-of-place accessory look?

Well, your dreams could be closer to reality, and though it’s been around for about a century now, there is actually a ring that says “Let’s Drink!” We are talking about the statement cocktail ring.

For most people, however, it doesn’t seem to make sense why someone would call a ring a cocktail ring. In this article, we’ll take a look at just not what the cocktail means and its significance (in history), but also how to wear the ring, and what makes it different from other designs and styles of rings, for example, the dinner ring. So, let’s get started!

What is a Cocktail Ring?

A cocktail ring can be defined as a piece of statement jewelry that is considerably larger than normal rings. It’s been designed to attract attention, as seen not just in the ring’s size but also in the colors and even the materials used to make the ring. 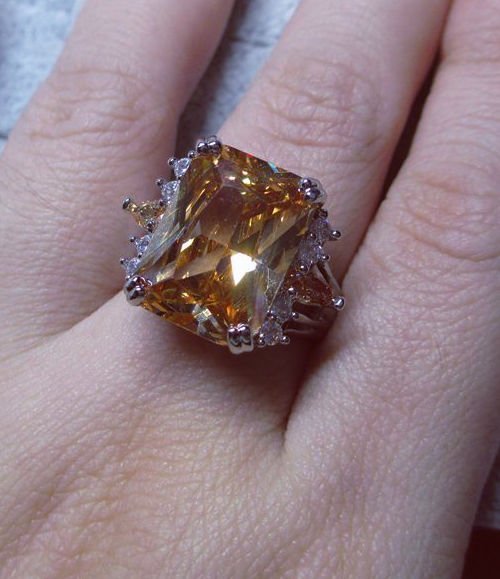 Often, the cocktail rings feature oversized center stones, and in other cases, numerous smaller sparkling stones in the settings.

What is the purpose of a cocktail ring? 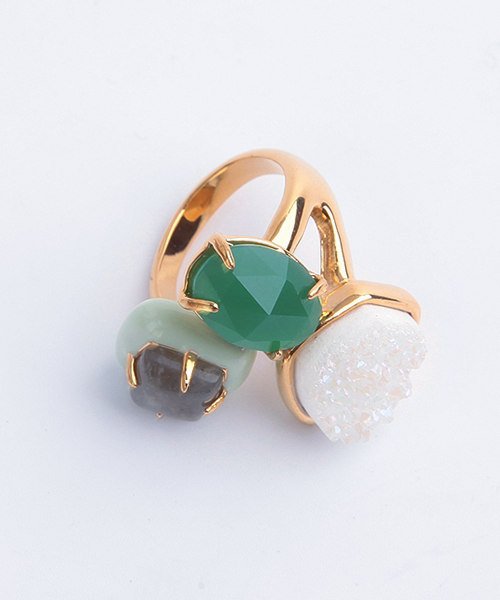 For most people, statement rings like cocktail rings offer a great way for them to express their personality. It adds a dramatic flair to one’s look, which is the most common reason why people wear the ring today.

When it first appeared, however, the cocktail ring was used as a sign of freedom expression among women and also an easier way for women to signal bartenders to give them their cocktail orders – this was during the Prohibition, and the ring offered an easy means of communication.

Why is it called a cocktail ring?

The cocktail ring is called so because it came into existence at a time of rebellion, a time when women sought and discovered their freedom and rights, which was also during the American Prohibition Era of the 1920s.

The concept of the cocktail ring was guided by the creation of something that was more than a piece of jewelry. With women stepping out of their homes slowly for jobs as well as equal representation, these rings were worn to represent the change. 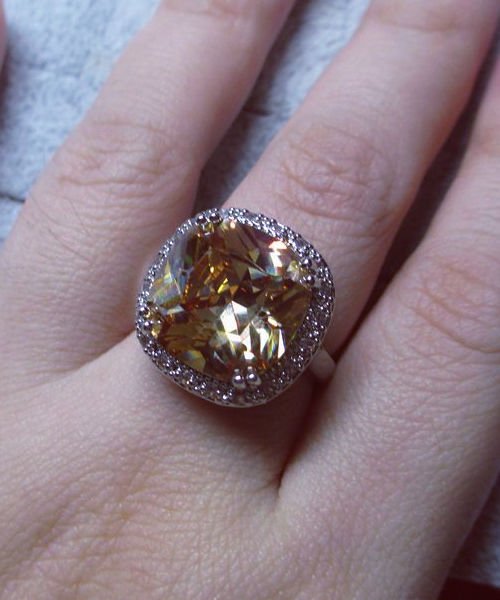 At the time, these rings were called Flappers. At the height of these changes and alcohol prohibited, women, wearing shorter dresses and hair, more jazz getting played, makeup, and flouting of social norms, the new breed of young women then would attend speakeasies and other underground establishments where alcohol would be sold.

Unfortunately, the alcohol sold at the time was too strong-tasting, albeit lower quality booze, and there was a need to sweeten the alcohol, hence the creation of the sweeter concocted cocktails that were easier to drink. This would then lead to the birth of cocktail glasses.

To draw attention to the bartenders and for the younger to be served the illicit brew, the cocktail rings come into play, hence the name cocktail rings.

As mentioned above, the cocktail rings date back to the 1920s Prohibition Era. What you may not know is that these rings are regarded as the original American “bling” because the ring emerged as bold statement pieces of jewelry that drew attention to the wearers. But there’s more to the story, all fueled by the Prohibition, which is also the reason why the 1920s are regarded as the years of excesses and exuberance.

This era also converged with a number of impactful cultural changes, including dramatic social and political changes that led to the country’s most dramatic advancements, as well as repression.

At the time, tensions were high, especially as the older generation struggled and got stuck in the nostalgic pre-WWI traditions, while their values clashed with the younger generation’s beliefs as the young-ins returned home from the Great War in Europe. This young generation came back home with new, rebellious youth culture. These changes included race relations and gender roles, as well as an explosion of the art scene and technological fronts that ushered in moving pictures through automotive, radio, the birth of the Jazz Age, the Art Deco movement, and also the country’s most brazen sexual revolution. There was also a wide exposure to the Black Culture through the Jazz Music’s immense popularity, and also the Harlem Renaissance both harkened by the beginning of racially-integrated spaces (social) across the United States. And though there still were waves of violence and backlashes plaguing the nation. 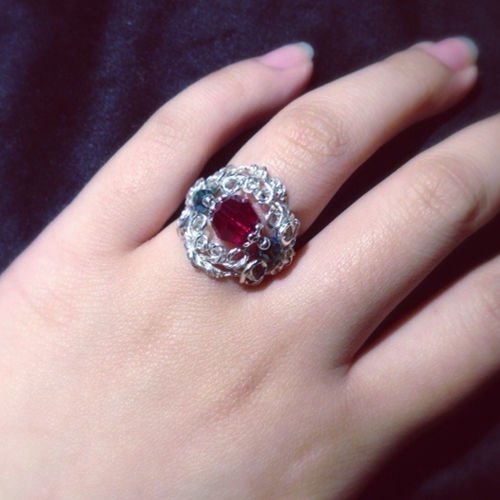 Now within this revolutionary state in the country and the increasing cultural instability, one of the things that the politicians did to instill some order was by prohibiting alcohol. This politically-driven move was made because it was appealing to the older generation that yearned for morality, and it was also the new subset for voting with women engaged in the grassroots levels through the Temperance Movement. So, on October 29th in 1919, Congress passed the Prohibition Act, which prohibited the sale of alcohol. But they didn’t put in place measures to enforce the law, and the booted alcohol section emerged in the black market. This came along with secret speakeasies, as well as hidden cocktail lounges which were only accessible through clandestine code words and personal connections.

The alcohol sold in the black market was, however, horrid-tasting and in other cases poisoned, creating a need for more palatable alcoholic libations, hence the cocktail culture. To get the attraction of the bartenders in these events, women would have to signal them using their big, bold cocktail rings.

Keep in mind that this period, as mentioned above, saw an increase in the number of women wearing shorter dresses and hair, along with bold makeup and accessories. The big cocktail rings made it easy to signal the palatable drinks, hence the cocktail drinks.

What finger does a cocktail ring go on?

Traditionally, the cocktail rings would be worn on the right hand on the right ring finger because the opposite hand/ finger is reserved for wedding bands and engagement rings.

Today, however, such traditions aren’t observed strictly, and you could wear the ring on both your right and left fingers or even the middle finger. 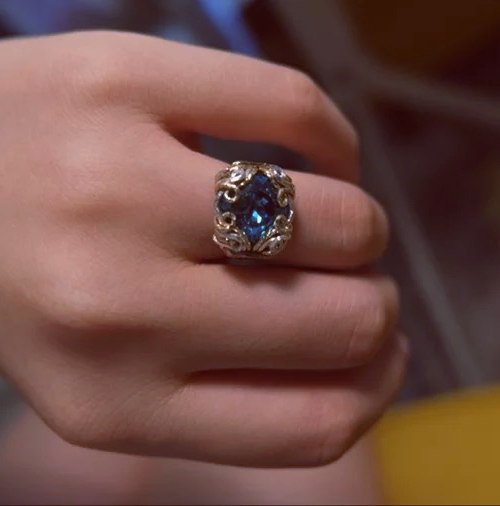 Should you buy cocktail rings?

Although they are attractive and designed to complement not of your outfits, cocktail rings aren’t suitable or an ideal choice for you. This means that if you are into simpler, more conservative jewelry designs, buying a cocktail ring might not be the best decision because you won’t wear it (as much?).

But if you love dressing up with eye-catching, dramatic, loud, and bold clothing and accessories, then buying a cocktail ring is essential for you.

The cocktail ring is trendy and fashionable, and if you opt for the pricier and rare pieces, they will last a long time, allowing you to accessorize easily for years to come.

Keep in mind that your personality notwithstanding, if you decide to buy a cocktail ring for special occasions, you always must buy the best quality cocktail rings. Avoid the cheapest ones.

Cocktail rings were first worn in the 1920s, and they were worn to fancy events at a time when there were numerous societal changes, especially for women. The rings allowed them to express their individuality and to express their freedom, albeit in a rebellious way.

Today, cocktail rings are one of the most stylish and popular pieces of jewelry, and if you have been considering adding some cocktail rings to your jewelry box, then you wouldn’t go wrong with cocktail rings.