For over 5000 years, people across different cultures, continents, and faiths have held a specific belief close.

This belief acknowledges the fact that some individuals may, intentionally or unintentionally, gaze in your direction with malice, envy, or spite, and because they have the malevolent gaze that carries curses which dart from their eyes like poison rays, your life will be in chaos from the moment they look at you. It is believed that this often happens when you are doing well for yourself or on the rise, and things crumble after that one evil gaze, all because the person who glared or gazed in your direction has the evil eye.

So, to counter or prevent the negativity and bad luck from that evil glance, you’d have to wear an amulet, talisman, or any other protective symbol. The black thread is one such talisman. Others are the Hamsa eye accessories and the evil eye bracelets.

The black thread is becoming increasingly popular today, as it’s considered one of the most powerful protective amulets that ward off the evil eye and other bad forces because of its astrological associations.

Some people cannot wear the black thread on any part of their body because their zodiac signs interact negatively with the color black – as with Aries and Scorpios. It is, however, favorable for Aquarius, Capricorn, and Libra because Mars favors these zodiac signs, and they will not be befallen by bad luck as would be the case with Aries and Scorpio.

11 benefits of wearing black thread on the waist

1. Protection against the evil eye Like other amulets meant to protect against the evil eye, as long as you wear the black thread, you will lead a happier, prosperous life because you are protected from the effects of the evil eye.

If you believe in this 5000-year-old belief, the black thread will be a great protective accessory for you. One of the big reasons women will wear the black thread on their waist is that when the black thread is worn a little tight and close to the skin, it will feel quite uncomfortable when you overeat or eat more than you think it should.

So, the black thread would come in handy if you are trying to lose weight or do the portion-control thing successfully. It also aids in weight management because you know when you’ve gained or lost weight without weighing yourself.

The moment the thread starts to feel tighter and uncomfortable, you know that you are either bloated or have gained weight, and when it’s getting looser, you may be finally shedding off the extra weight off your waist. It remains unchanged when you are neither gaining nor losing weight. Some people claim that rubbing the black thread against the skin creates a tickling effect, and as it keeps striking the skin around the waist, it can be arousing.

It also improves sexual intimacy because the black cord looks great against the skin and the wearer looks stunningly hot when intimate with their partner.

4. It reduces stomach pain and helps to heal hernias The black thread may also come in handy in case of naval dislocation because it is said to help lower stomach pain.

This is a common belief, especially in India, where it is believed that the navel could be displaced from its natural position, and when this happens, it causes acute stomach pain. However, wearing the black thread can reduce or prevent this pain. The black thread worn on the waist or the ankle is also believed to carry great healing effects, and if you have a wound or pain in the tummy or any other part of the body, the thread will speed up the healing process. Men and women wear the black thread around the waist because it’s considered an excellent solution for weight loss and enhances overall good health by boosting metabolism.

Increased metabolism means faster weight loss, and it will also prevent a potbelly or help reduce it, in the process, improving your health.

Increased metabolism is said to avoid the effects of an imbalance in the body and the Indian Pitta, Vatta, and Kaph. 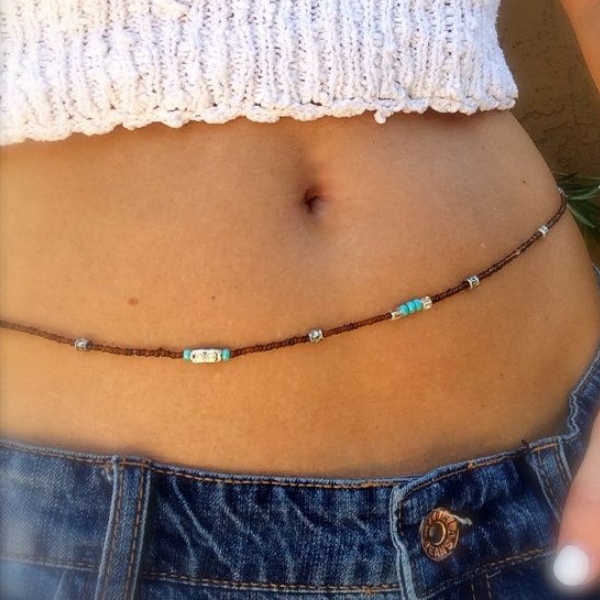 Since most diseases result from the body retaining too many things, often in the form of toxins, especially when the body cannot get rid of these toxins naturally, the black thread ensures the proper elimination of waste and toxins.

It does this by improving the strength of your intestines, digestion, and bowel movement, hence good elimination. And thanks to proper elimination, diseases like diabetes, heart attacks, blood pressure, blood clots, infertility, impotence, and high cholesterol are prevented and better managed.

8. It’s an important part of childbirth 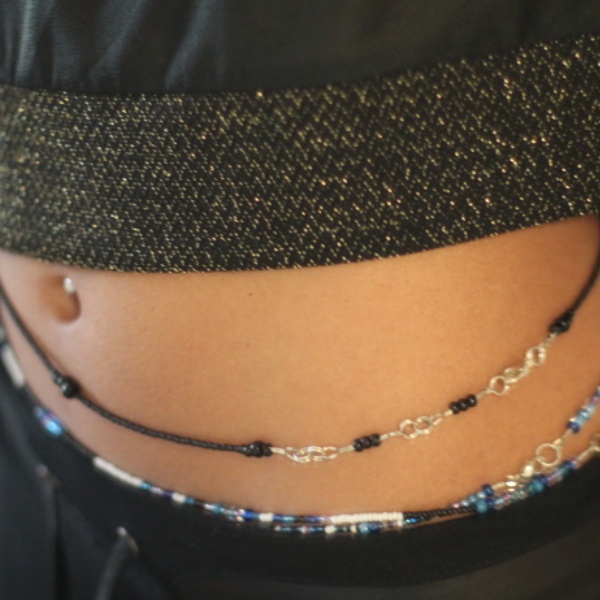 The black thread worn around the waist is considered an important part of childbirth, as mentioned by Manu Maharaj and Dharma Shatras, as it is believed that during childbirth, the mother should never be naked, and because this is a paradox, the black thread on the waist serves as a garment that protects the wearer, and she won’t be naked.

It is believed that a woman should never be naked, so the black thread somehow keeps her covered. 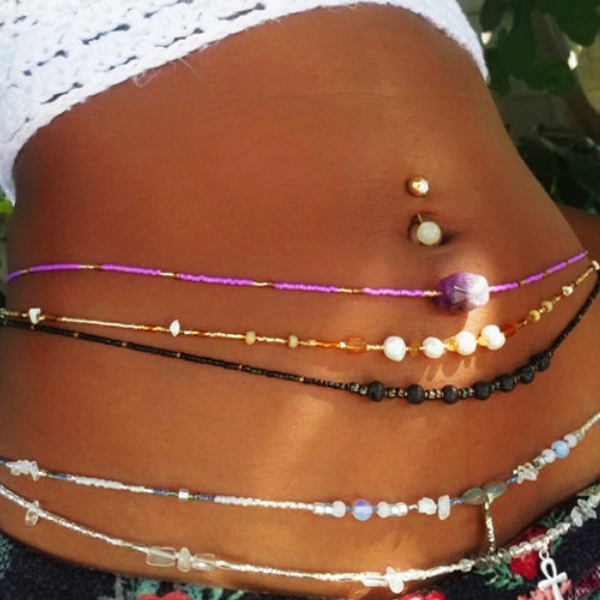 The other reason for wearing a black thread is that while you could wear a thread in any other color, black is ideal because it results from mixing different colors, meaning that it absorbs and radiates energy better than other colors.

As a result, it brings in warmth and positivity and helps to give off the same energy. 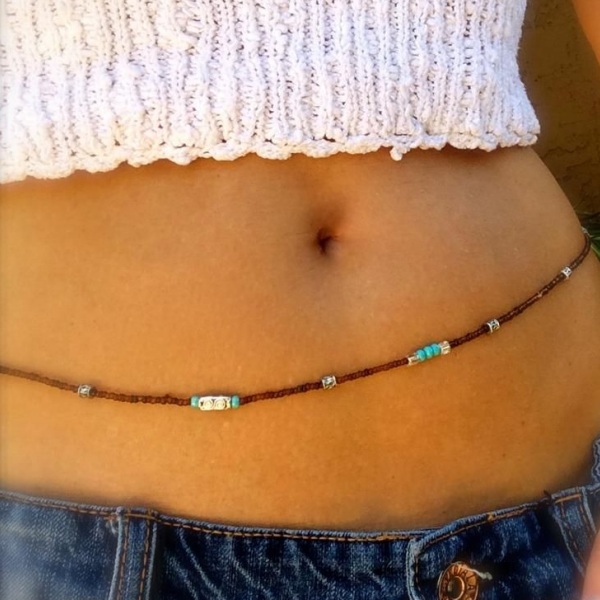 The black thread will also improve your spinal health by supporting the lumbar spine and preventing problems like slipped discs, lower back pain, and other spinal cord problems. 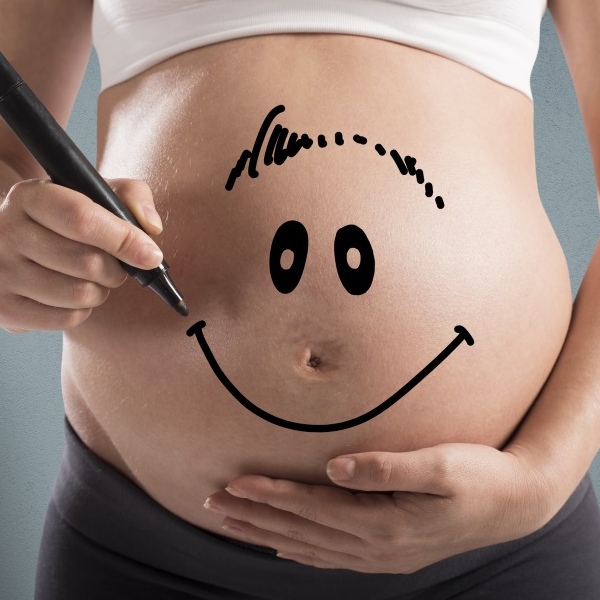 This is because the color keeps things contracted and cool, which is the perfect state for your reproductive organs.

It protects you from the evil eye and offers significant health benefits, so you may want to start wearing the black thread on your waist.