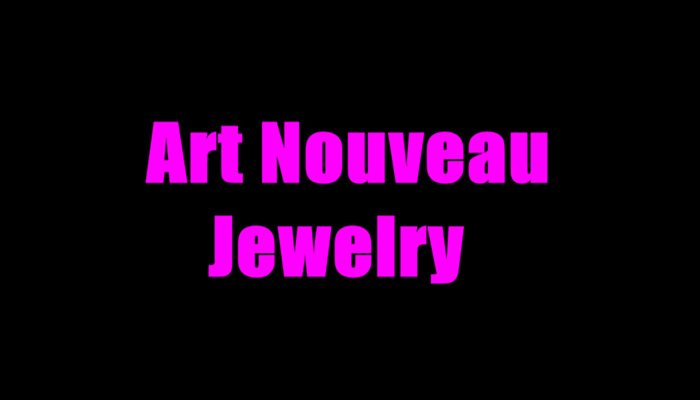 You’ve probably come across the term Art Nouveau, and you could have worn a form of Art Nouveau jewelry in the past. But do you know what this means or what classifies jewelry as such?

What Is Art Nouveau Jewelry? History?

Art Nouveau jewelry, also known as ‘New Art’ jewelry, can be defined as the class of jewelry that was created in France in the late 19th century and early 20th century, between 1895 and 1914. This class of jewelry comes off on the heels of the overwrought jewelry designs of the Victorian Era – this era ended in 1901 with the death of Queen Victoria. This jewelry design creates a very striking contrast with the then-popular, mainstream jewelry designs, specifically the Edwardian designs that were popular at the time.

And speaking of history, Art Nouveau jewelry came to be before the First World War at a time when mass jewelry manufacturing was kicking off and when absinthe flowed.

Interestingly, the Art Nouveau period was rather short-lived, and it only lasted about 15 years because of the onset of World War I and also because this type of jewelry was too much over the top, meaning that people lost interest in them rather quickly. As a result, Art Nouveau jewelry stands out as an impactful jewelry design that, despite its short-lived nature, holds a place in the disciplines of decorative and fine art. And as part of the Belle Epoque, which was a time when there was significant growth in wealth, and as a result, a flourishing arts scene, this new art form of jewelry stood out – it offered a chance for experimentations with new materials, techniques, and motifs.

Why was Art Nouveau jewelry created?

Fuelled by the need and the opportunity to experiment with new materials, motifs, and art techniques and the fact that there was immense growth in wealth at the time, it might seem like the jewelry style was encouraged by a welcoming society and artists not afraid of experimenting. But is this the actual reason for the creation of this jewelry style?

Well, just like all other forms of art, an era’s zeitgeist is often documented and represented by the designs of the jewelry from the time.

And according to Elyse Zorn Karlin, who is the co-director for the Association for the Study of Jewelry and Related Arts, this short-lived style of jewelry was more of a reaction to the numerous things that were going on in and around the French Societies at the time. This includes women fighting to secure more rights outside their homes by getting jobs and education.

At the same time, it would appear that this period was characterized by the French having an inordinate fear of what would have happened to them if women won the equality of rights that they so aggressively fought for. This was the case because around the same time (a few years prior), the country had lost the Franco-Prussian war. This humiliating loss and the women’s fight left the country in a rather vulnerable state. Essentially, the idea and the reality of women having to leave their homes for work stoked immense fears of a drop in birth rates, which would, in effect, leave the country without an adequate supply of human resources (men) to fight in the French Armies.

This is the primary reason why Art Nouveau art is very much woman-centric. The pieces depicted the loving and unthreatening nature of women through their sweet faces and flowing hair. It created a sort of “fantasy” women like the sexualized mermaids or the fairies with wings and, in other cases, the “scary” women figures such as Medusa; all representing the dichotomy of just how the French men thought of women at the time women were revered but also feared.

Besides women, Art Nouveau jewelry also incorporated elements of nature in a unique way that had never been seen in jewelry – the pieces of jewelry had flowers and insects, also of some sexualized nature.

Together, the jewelry came together as a completely new art form, something that hadn’t been seen before, which is pretty much what makes Art Nouveau jewelry stand out to date.

So, who wore this unique jewelry style?

It’s an undoubted fact that the Art Nouveau jewelry was only meant for a rather select few in the French Society.

This was the case not just because the pieces were expensive, but Art Nouveau jewelry was also rather large, with depictions of naked women, something that was rather shocking at the time.

With these design features in mind, most of these pieces would be donned by the wealthy and, in some cases, artistic people.

We cannot say what exact materials were used for this class of jewelry, especially because the materials used were not as important as the designs of the jewelry.

However, most of the materials that can be seen in the Art Nouveau pieces in museums or the ones owned by collectors note that the jewelry pieces weren’t much about the gemstones used, but there was a lot of enamel used specifically the plique-à-jour enamel. plique-à-jour means “Letting in daylight” in French, and this type of enamel was translucent, as the name suggests, which also meant that the enamel would allow for light to pass through the enamel – just like the stained glass windows.

Besides enamel, there was also use of the horn from cows and other domestic animals. The horn would be bent into different shapes for different pieces of Art Nouveau. There was also the use of carved ivory. And in rare cases, diamonds would be used as accent stones.

Does Nouveau Jewelry worth anything today?

If you are a collector or if you find yourself drawn to art and jewelry from the pre WWI days like the Art Nouveau, you’d want to find out what the jewelry is worth today, that is, if it’s even worth anything.

Well, the first thing you need to keep in mind is the fragility of the Art Nouveau jewelry, thanks to the use of enamel. The pieces break easily, and they are short-lived. Therefore, there are very few actual Art Nouveau jewelry designs in great condition, which makes them highly desirable.

That said, Art Nouveau pieces are expensive, but they haven’t reached that million-dollar range just yet. But if you have an attractive piece in pristine condition, it would fetch a few hundred thousand dollars.

As part of the Symbolist Movement inspired by William Blake and Pre-Raphaelites, the short-lived Art Nouveau jewelry is unique, influential, and valuable.

This class of art represents the combination of historical movements and the elements of Arts and Crafts to bring forth unique, varied, and asymmetrical jewelry designs.

The jewelry represents a period of wealth but also political ease, and since few pieces were made, owning an authentic piece of Art Nouveau jewelry would make you a few hundred thousands rich.