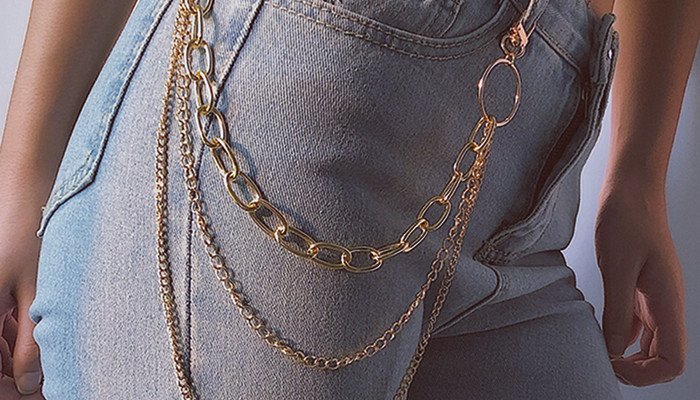 There is nothing new under the sun and fashion is no exception. It is a cycle that keeps re-occurring after decades or centuries, in slightly improved forms.

There are timeless pieces that are always guaranteed to make a comeback if they ever die out at all. Certain pieces were a buzz in their time but faded away after a while without clear signs of a return. Wallet chains are the best example of this.

From the 50s when they first became trends, wallet chains have been alternating through periods where they’d create a huge buzz around it, with periods where people are oblivious to it.

As such it can be hard to tell whether they are likely to become a trend again this year or not. That is what this article is about. We will analyze the history of wallet chains, their purpose, and whether or not they are worth getting.

Although wallets existed way before the 50s, that was the genesis of Wallet chains. They were brought into prominence through the biking culture whose fashion involved mostly leather and metal. 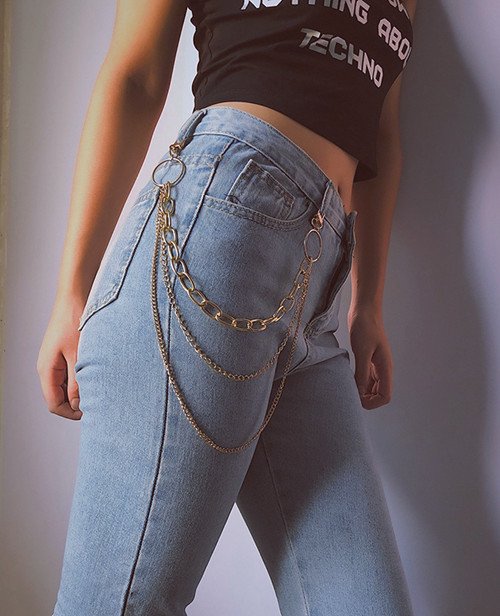 The bikers in that time used it more for practicality rather than as an accessory. For them, the main function of the chain was to prevent their wallet from falling off while riding.

It was also a great way of discouraging pickpocketing since a pick pocketer wouldn’t be able to go far with your wallet if it was attached to your belt or belt loop.

The trend disappeared for a while and came back in the 70s through the punk scene. Punk fashion at the time borrowed heavily from the bikers including leather jackets, boots, and wallet chains.

The only difference is that for the punk scene, the wallet chain’s appeal didn’t just have to do with its effectiveness at preventing pickpocketers, but also that it looked cool.

The 70s was the first-time wallet chains were used as fashion accessories. Punk was also not the only music subculture that adopted the trend. Through the 80s, the rock and metal rock scene also adopted it as a way of creating a “tough” experience.

The next major appearance after that was in the 90s during the grunge music scene. Grunge was considered a heavier raw type of music and included bands like Pearl Jam and Nirvana.

Although they also adopted the wallet chain into their fashion, it wasn’t to look tough or hot but genuine. Their fashion involved baggy jackets, flannel shirts, and long t-shirts, coupled with ripped jeans, dyed hair, and converses. The whole idea was effortlessly looking cool without caring about it. 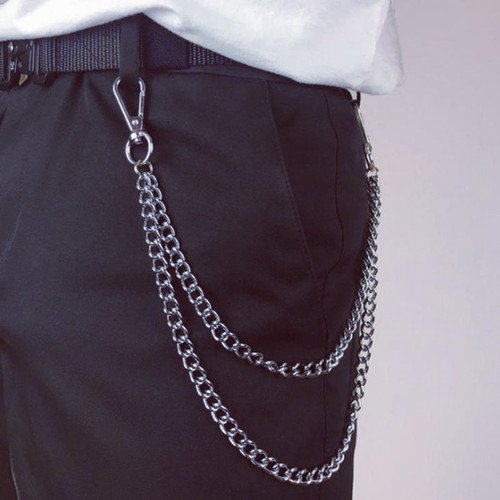 After the grunge scene, it was a while since the wallet chains made another appearance until around 2016, which was more recently. It was spotted in street fashion, which at the time was going through a rock and roll phase.

Hip-hop culture also seemed to be taking up the trend, which would make sense seeing as chains were already a key part of their fashion. Even on social media, these chains have popped up and enjoyed a surge of popularity.

When Did Wallet Chains Become Popular?

Although bikers were the ones to introduce the concept of wallet chain to us in the 50s, they weren’t the ones who made it a trend. While most people seem to think that these chains became popular in the 90s, they were popularized in the 70s with the pioneers of punk at the time. 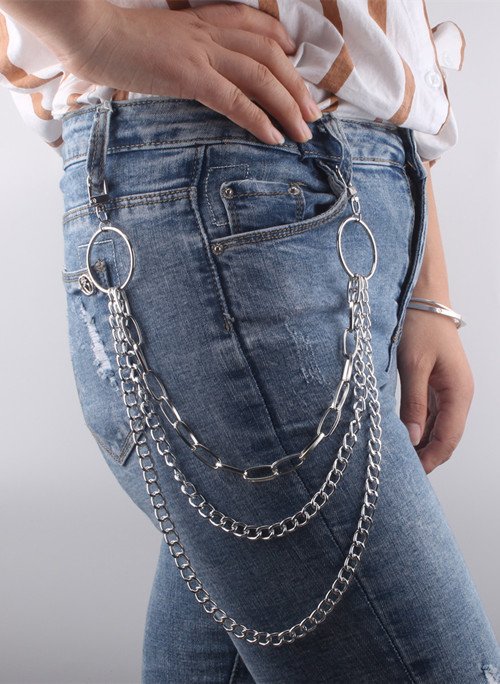 That’s because they were the first group to promote the wallet chain as a fashion accessory and not just an effective tool against pick-pocketing.

It is after the 70s that other groups adopted the chain as a way of expressing themselves. Whether that was by appearing tough in their way or simply cool.

But that’s not to say that the chains weren’t a big buzz in the 90s as well. They may have been more of a buzz then than in the 70s. But it was punk that brought wallet chains into the fashion spotlight.

By the 2000s however, the craze around it had died down and even became a point of ridicule. Still, more recently it has been making a few appearances on different platforms like fashion shows and social media.

What’s The Point Of A Wallet Chain?

Today many people fail to see the essence of a wallet chain. What made it special or trend? That’s because they are ignorant of what wallet chains were. 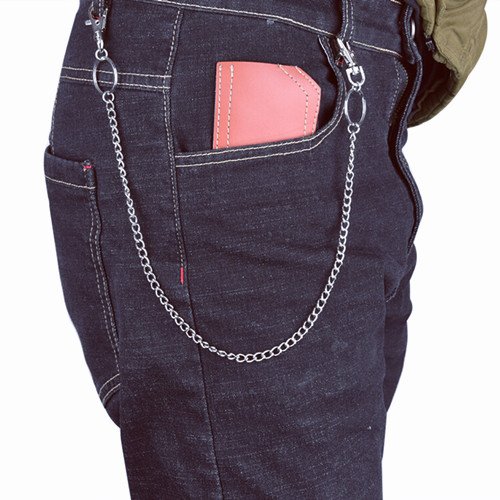 They are chains that are attached to wallets or purses on one end, which were placed in the back pocket, and leather or metallic loop to attach to the front part of your pants.

They were made of different materials including brass, steel, silver, and even leather. The chains varied in length between 30-90cm and some were more elaborate than others.

But from the 50s until now, wallet chains have served two important functions. The first one was as a fashion accessory that helped express one’s toughness or coolness.

The other function was to secure the wallet. For bikers, it was mainly to prevent the wallet from falling off. For punks and other music subcultures, it was to prevent pickpocketing.

They are also practical because they make it easier for you to access your wallet, just remember to put it on the side of your most dominant hand.

From what we’ve discussed so far, you can see the steady popularity wallet chains have received over the years. They keep coming back each time and judging from how it has been popping up recently especially on Instagram and Pinterest, there is a likelihood that they could be making another major comeback in 2023. But why should they? 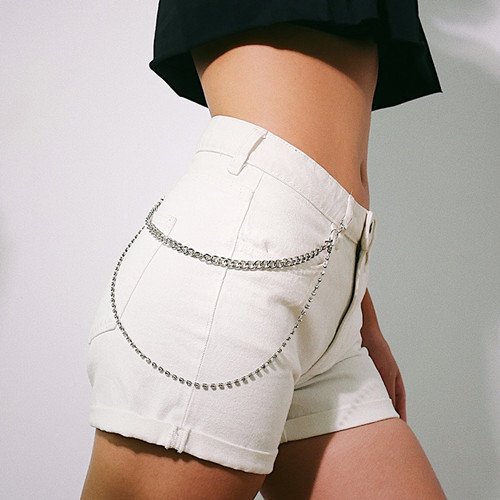 For starters, its practicality is enough reason. The chain attached to the wallet makes reaching for or picking up your wallet in case it falls, more convenient.

They also secure your wallet from being stolen by pickpocketers. That’s a plus considering that wallets are among the most stolen items and the ones carrying the most important items like licenses, IDs, bank cards, and money.

To add to it the wallet chains are stylish accessories even though some may not agree with them.

It is one of the reasons most groups adopted it all through the years. They are versatile and easy to style. They also come in different designs depending on how elaborate or simple you’d like them to be.

What’s more, there are improvised versions that do not even require you to attach a wallet to it. Lastly, it would be a great way to add a retro touch to your look if that is what you are going for, whether male or female.

Pros And Cons Of Wallet Chains

The following are some of the advantages and disadvantages of wallet chains if you decide to get one:

Why Wallet Chain Is Still Popular? 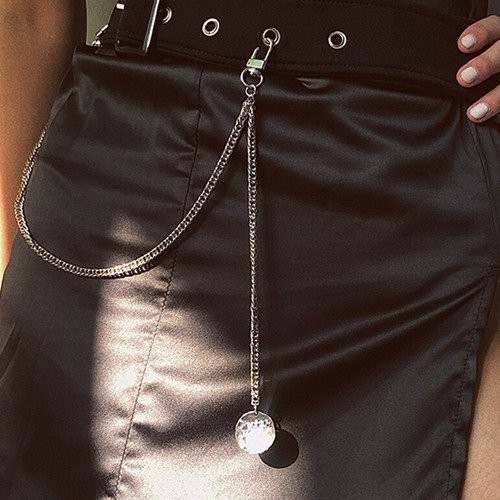 Wallet chains have managed to survive and maintain their popularity until now for various reasons. The following are some of the main ones:

Wallet chains are a great way of making a statement with your look.

A simple chain looped on the side of your jeans or leather pants is bold enough without being too tacky or seeming overdone. It would also compliment your other accessories.

It started with bikers and transitioned to punks with their slim-fitting leather pants.

Later it was paired with broad or worn-out jeans and baggy long t-shirts.

Now stylists are spotted on Instagram pairing the chain with mom jeans or cargo pants.

Regardless of what it is paired with the chain compliments the outfit perfectly. It also comes in different varieties of chain design, length, and thickness. Not to mention it is suitable for both men and women.

Since the 50s, wallet chains have been used to keep wallets secure in the pocket.

Even if a pick pocketer tried taking your wallet, they wouldn’t go far without tagging your pants and alerting you.

Or if your wallet was to fall out of your pocket, you won’t have to worry about losing it.

Most people assume that wallet chains are tacky because they are made from cheap material. This is, however, not true.

There are luxury models of wallet chains that are more expensive than regular ones.

They are made of top-quality metal and/or leather. But tackiness isn’t just about the type of materials but also how you wear them.

Should You Buy A Wallet Chain?

There is no straightforward answer to this question. Fashion after all is a matter of individual preference. It depends on what you are going for.

If you want a timeless piece that adds a retro feel to your look or a biker’s or punk touch, then the wallet chain is great for you.

What’s more, you don’t have to put it on with the wallet. Based on the current trends popping up, you can simply attach one end of the chain to your back belt loop and the other end to the front belt loop.

In summary, it would seem that wallet chains are coming back in style if they haven’t already.

Either way, they are timeless pieces and what matters is how you wear them.

Fashion, after all, is about being comfortable about your look and wearing it with confidence.