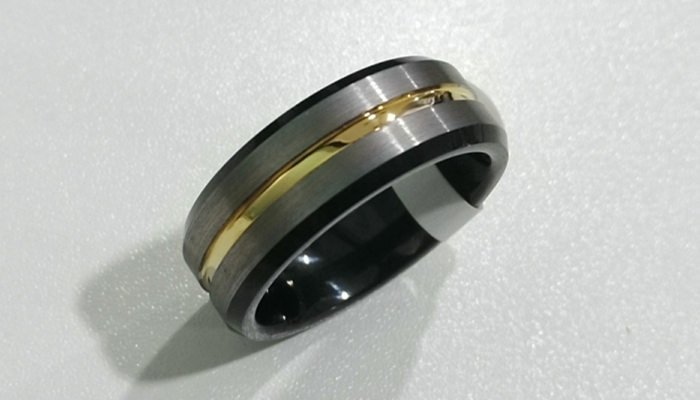 Tungsten carbide rings are becoming more and more popular. Tungsten rings made with a metal alloy containing tungsten and carbon material. So, the tungsten ring can last more than 30 years without losing its luster.

Before answering this question, you really should know how the tungsten ring manufacturing process. Tungsten rings contain tungsten carbide, which is a hypoallergenic metal alloy of equal portions of tungsten and carbon atoms.

They usually have a natural gray hue, but can also come in black, gold, or white hues. Products made from tungsten carbide are basically sintered powders, meaning cobalt powder as well as a small amount of other alloying materials in powdered form mix with tungsten carbide powder. The two powders are then fused by applying pressure to them to get the desired shape, often in a die.

At this stage, inhaling these powders is extremely dangerous as it can cause coal miner’s black lung disease. Cobalt is the binding metal in this mixture. Afterward, the fused powders are baked and sintered, and then locked in storage containers, reducing risk of inhalation.

Therefore, tungsten powder is toxic, but tungsten rings are not toxic and they are safe to use.

There are various reports on the health risks involved with tungsten products. Some reports have stated a direct association between stroke risk and amounts of tungsten in the blood. As such, people with high levels of heavy metals in their blood have an increased risk of developing circulatory illnesses. Two major conditions are associated with tungsten; acute, and chronic tungsten poisoning.

As a result, there is a likelihood of tungsten accumulating in your urine, blood, nails, and hair. Luckily, the body eliminates this toxic compound by excretion, but the body may retain some of its traces.

People diagnosed with acute tungsten poisoning gradually recover within a few weeks with complete metabolic/biochemical abnormalities within five months. It is advisable to get toxicological advice from experts if you suspect acute tungsten poisoning. Charcoal and oxygen help in cases of respiratory conditions. In cases of seizures, benzodiazepines are helpful as well as hemodialysis when it comes to kidney failure.

Introduction of tungsten in America was as an environmentally-friendly alternative to the use of lead in bullets making for the military. This metal dissolves in low pH, in the presence of iron, in low oxygen concentration, and it can leak into drinking water and the soil.

However, the toxicity of hard metal mainly arises from the effects of cobalt on the respiratory system. On the other hand, tungsten carbide modifies the toxicity of cobalt as various tests show that cobalt alone does not have the effects as when combined with tungsten carbide. Hard metal workers have also demonstrated evidence of mild-to-moderate neuropsychological impairment, especially when it comes to memory function.

Can tungsten rings cause cancer?

Tungsten rings have managed to garner a reputation for themselves for being a durable and cheaper alternative to gold, diamond, and platinum wedding rings. They are also scratch-resistant and quite affordable when compared to titanium or ceramic rings.

According to recent reports, tungsten coils used in interventional radiology are subject to degradation, implicating their ability to maintain arterial occlusion. There are also several toxic effects linked with the dissemination of this material into the bodies of patients. As a result, radiology patients have shown numerous traces of high tungsten levels in their blood, leaving to the carcinogenic potential of this material.

Therefore, tungsten rings will not cause cancer.

Can tungsten rings make you sick?

Tungsten rings are also popular due to their hypoallergenic nature. It does not react with other substances, including oxygen, acids, or any other elements, preventing your finger from turning green. However, according to some health reports, long-term exposure to tungsten rings causes breathing problems and changes in behavior. It may also irritate the eyes and skin upon contact, resulting in redness, itching, and scaling of the skin.

Inhalation of tungsten irritates the mucous membrane and lungs. There are no known chronic effects related to tungsten rings as well as no proof that prolonged exposure to this material worsens medical conditions. Many health practitioners regard tungsten as a highly toxic compound, which is harmful to both humans and the environment.

Over time exposure to tungsten leads to lung problems, especially among hard-metal workers. However, lung diseases linked with tungsten are mostly due to exposure to cobalt rather than tungsten. Research on mice in a laboratory showed that exposure to both tungsten and cobalt results in lung damage.

NOTE: Tungsten rings made with jewelry grade tungsten are cobalt-free. So, tungsten ring will never make you sick.

Can tungsten rings cause joint pain?

Often, people purchase tungsten rings to wear every day for the rest of their lives. Whether they buy it as a wedding band or ring or as a simple decorative piece, the primary intention is that it will not leave the finger for years to come.

Tungsten is one of the hardest metals available in the world. Its hard nature allows jewel makers to design it into various innovative shapes and designs. However, these rings are not resizable. On the Mohs scale, the hardness of tungsten rings ranges between 8 and 9.

During emergencies, removal of rings should be done carefully for treatment or to prevent further injury to the wearer. Their hard nature makes tungsten rings challenging to remove in emergencies, especially for those using traditional ring cutters. As a result, the exercise of removing such rings may cause joint pain as well as other skin reactions.

NOTE: Wearing tungsten will not cause joint pain. But when you take it off, you must be careful.

Brittle–hard but liable to break or shatter

Tungsten rings made with premium quality tungsten carbide, which only breaks when you apply enough pressure to them. Tungsten ring manufacturers remedy their fragile nature by offering a lifetime warranty in case of accidental breakage. ( it could happen, but the chance is very slim) Check this post here. Some people who work with heavy machinery prefer wearing tungsten rings due to their durable properties.

Tungsten rings  are not resizable

If you are looking for a re-sizeable modern ring, tungsten rings may not be your good choice. These rings are not resizable. As such, you may have to purchase another tungsten ring if you need a bigger or smaller ring. So, I suggest you guys buy tungsten rings with a lifetime warranty, so you can change a ring for free anytime.

Tungsten metal alone is toxic and can cause many problems. Such as cancer or lung problems. However, tungsten carbide rings made with jewelry grade tungsten are not toxic.

Do you want to read more tungsten ring related topics? Click the link to read. If you want to know more about fashion tips or fashion jewelry, do not forget to follow our home page.