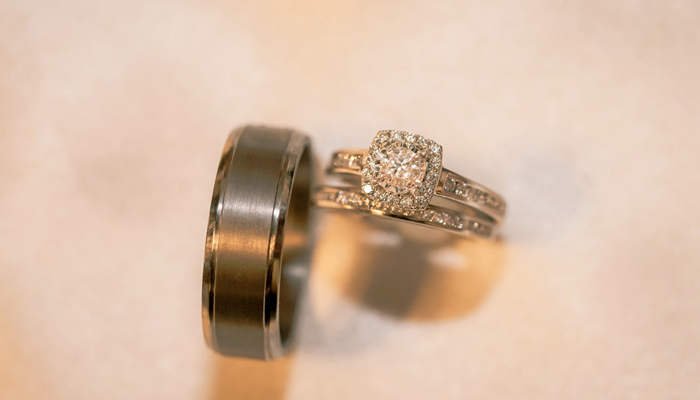 Are Guys Supposed To Wear Engagement Rings? For as long as anyone of us remembers, women have always been the ones who receive engagement rings, and it’s been made the norm. But if you are one to question things, you should be on the same page as the rest of us, wondering why men do not wear an engagement ring.

At the same time, we may know or heard about guys wearing engagement rings. With the state of the society we all live in, these events leave us a little confused unless you are liberal then you know that it isn’t a big deal, really, men should wear engagement rings the same way women do.

In this article, we tackle these hard questions as we seek understanding into engagement rings and men.

According to history and traditions, the man is supposed to get down on one knee then ask the woman to marry him, often in a grand and a romantic fashion.

In fact, such grand proposals are quite the norm and believed to carry more weight than weddings. But you cannot blame anyone for this, especially because this is the decision that determines whether the partners will take their relationship to the next step or not.

What about men, do they get to and should they wear engagement rings as well?

Well, the answer to this is complicated.

However, times are changing, and in these modern times, where women can ask men out and propose, things have changed.

While as many as 80% of women will receive engagement rings to celebrate their engagement, it’s important to note that this history started with the Egyptians where the engagement rings used were there to represent eternity – hence the circular shape. By wearing the band around the finger, it symbolized your commitment to love/ be together forever.

Along with the ring, the decision to ask a woman to marry you was accompanied by the tradition of dowry exchange for the woman’s hand in marriage. By the 2nd Century BC, ancient Romans started giving women betrothal rings, something that was previously done through the exchange of highly-priced gifts/ dowries. The physical exchange meant that the woman was taken, and the man was in the ownership of the man. All these led to engagement rings.

Next came diamonds discovered in South Africa in the 1880s, and the rise of diamond engagement rings.

So, Do Men Wear Engagement Rings?

And with today’s gender fluidity, women aren’t shy to ask men to marry then. Then, of course, you have same-sex gender couples, in which case, any of the two could propose. In such cases, the engagement ring is still the common denominator when it comes to marriage proposals, and it’s worn by both men and women during the engagement period.

While most men will choose to only wear the wedding band, others do not mind wearing engagement rings to represent their impending nuptials.

In cases where men choose to wear the engagement rings, it’s important for these men to specify that they are only engaged because the rest of the men around them will assume that they are already married as the only justification for that man wearing a ring.

Why Do Some Men Not Like to Wear Rings?

Some men will outright note their dislike for wedding bands and any other kinds of jewelry. In such cases, it would be a good idea for the couple to look for alternative ways through which the man can express their commitment and show their relationship status.

Wearing the wedding band around their necks (ring hanging from a necklace) will be a preferred choice. In most cases, men who don’t like wearing a wedding or engagement rings on their fingers will find it easier and more comfortable to wear the ring as a necklace more appropriate.

If you feel that this would be a safer alternative for you, then let your partner know about it first. Being honest about how you feel about jewelry is important, and if the idea of a ring doesn’t sit well with you, it would be a great idea to look for alternatives that will work for the two of you.

Besides the aversion to rings that comes from a dislike of jewelry, there are many other men who wouldn’t want to wear their wedding or engagement rings on their finger because of their career.

For example, if you work as a plumber, a construction worker, electrician, or a waste collection specialist, etc., wearing that ring won’t be the smartest thing to do because you could destroy or lose the expensive wedding/ engagement ring on the job. Your partner wouldn’t be happy with that either.

Now, regardless of the decision you make and whether you wish to wear the wedding/ engagement ring or not, you must be aware of the risks that come with taking that ring on and off.

The risk of losing the ring is very high, and since rings are easily lost, you might want to work on wearing your ring around your neck more, or you could keep it somewhere safe at home.

That said, we can agree that no one has to wear that ring. In modern times, couples are deciding not to wear engagement rings because of the cost, but in other cases, the reason behind their decision is that they just don’t want to.

And there is nothing wrong with this. At the end of the day, engagements and marriages are more about the love shared and not the kind of object you choose to put on your finger.

In what cultures do men wear engagement rings?

This might come as a surprise, but in some cultures in Chile, for example, the guys wear the engagement rings on the right hand to symbolize an emotional commitment or the engagement to be married.

During the wedding, the engagement rings for both men and women are transferred to the left hand on the ring finger.

Do guys wear engagement rings on the right hand?

Yes and No. Men in some communities in Chile and other parts of the world will wear their engagement rings on the right hand.

In other cultures, however, if a man chooses to wear an engagement ring, they will have that ring in the hand of their choosing.

The decision to wear or not wear an engagement ring as a man will depend on several factors like your personal preferences and the culture you are brought up in.

Most men will not, however, wear engagement rings, and if they do wear the engagement or wedding ring, they will prefer to have the ring worn as a necklace.

You don’t have to wear the engagement ring if you don’t want to, though. Just make sure to have that conversation with your spouse first.

Thanks for reading. If you want to read more ring related topics, please visit here for more. And you guys also can read more fashion topics here.