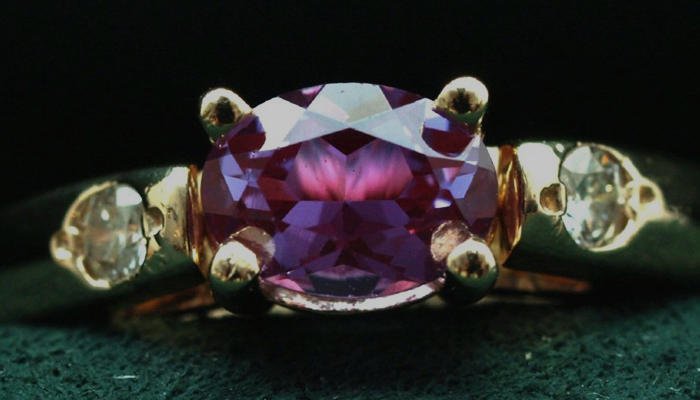 Jewelry shopping seems like a straightforward activity for many, but a lack of knowledge in metals, stones, crystals, and other terms used can lead to a loss.

That’s why in this article, we’re dedicated to explaining the difference between alexandrite and tanzanite. That way,  you can make wise shopping decisions.

Knowing the characteristics of alexandrite helps explain what determines its value. There are two factors that jewelers look at. The first one is how green and red the gemstone turns. The more the color pops or is bright, the higher the value. The second is the degree of color change. Not all alexandrite gemstones are the same. Some can make the entire shift from green to red, while others only do so slightly. Thus, the alexandrite stones that turn bluish-green and purplish or brownish-red hold less value.

Just as with any gemstones that need appraising, alexandrite stones equally get valued according to their clarity. That said, the color change is what will ultimately determine the value. A clear stone that turns purplish and brownish still has less value than a stone with less clarity but can make the full color change in both lightings mentioned. Size is also a factor when it comes to valuing any gemstone.

Now that we’ve looked at the factors that give alexandrite its value, let’s look at the pricing and why only a minority of people can see and own an alexandrite. These stones are equally valued in carats. One carat of alexandrite can cost up to $15,000. That’s on the lower side because there are alexandrite stones that go for up to $70,000. This kind of pricing is inconceivable for the average person. Even so, it’s worth mentioning alexandrite gemstones that don’t make the full-color change get priced less.

If you know your geography, you’ll notice that tanzanite sounds similar to the East African country of Tanzania. That’s because the only know deposits of this stone are found in northern Tanzania; essentially, that’s the only place on the planet tanzanite gets mined. The stone initially went by the name zoisite, but Tiffany & Co. opted to call it the tanzanite to increase people’s curiosity, which was part of their marketing strategy. The color of the stone and the campaign the jewelry company ran helped bring tanzanite to the world stage.

Tanzanite stones come in three shades; blue, violet, and quite rarely, green. The stones that carry a higher value are those blue, making tanzanite the second most popular blue stone after sapphire. A green “tanzanite” is rare, which gives it incredible value and a collector’s dream find. What’s impressive about this jump in popularity is that the tanzanite is a relatively recent discovery, with commercial quantities only began coming out of Tanzania in the 1960s. In 2002 it was named the December birthstone.

To give a broader context to why tanzanite is beloved globally, let’s look at what it is. It falls under the class of naturally occurring mineral zoisites. They come in various other colors, including pink, yellow, brown, and green. The quotation marks put after talking about green tanzanite is because tanzanite gemstones typically fall under three color ranges: blue, bluish-purple, and bluish violet, all at varying intensities. Thus, the underlying color of all the zoisite stones coming out of Tanzania falls under these three colors and cannot be found anywhere else, owning to their rarity.

It’s not just the color that drew people’s attention after the discovery of these zoisites. The transparency of these crystals sparked researchers’ awareness that one can drastically improve any zoisite color using heat. They were able to take green or brown zoisites, and using heat treatment, turn them blue. This discovery was necessary because the demand for blue crystals has steadily been on the rise, and there aren’t enough tanzanite stones to go by.

If you can turn a zoisite blue from its original color, then what makes tanzanite stones unique? The presence of small amounts of vanadium within the mineral structure is what causes the blue color. To further enhance the blue in tanzanite, using heat treatment, companies now heat the stone to 600 degrees Celsius for 30 minutes or so. That causes the vanadium in the gem to oxidize, further enhancing the blue color.

The temperature is low compared to the heat treatment that rubies or sapphires undergo, exceeding 1000 degrees Celsius. For this reason, if you’re purchasing tanzanite jewelry, ask the jeweler if the blue is natural or due to heat treatment, significantly affecting the value and price.

What’s the difference between Alexandrite and Tanzanite?

Let’s look at the main difference between these two gemstones.

Color: Alexandrite changes color from green to red under sunlight and incandescent light, while the tanzanite doesn’t change color. In its natural state, it is blue, bluish-purple, or violet.

Hardness: Alexandrite is harder, with a hardness of 8.5 Mohs. Tanzanite stones are more delicate, standing at 6.5 Mohs.

Wearability: One can wear alexandrite jewelry with relatively more ease compared to those made from tanzanite. That’s because alexandrite gems withstand daily activities quite well. If whatever you’re doing is rough, remove your tanzanite jewelry.

Mining location: Tanzanite stones are only found in northern Tanzania, while alexandrite stones get mined in Russia’s Ural Mountains (where they first got discovered), Sri Lanka, Brazil, and East Africa.

Discovery date: Tanzanite is a pretty recent discovery, only mined on a large scale in the 1960s. Alexandrite is much older, having been discovered in the 1830s.

Let’s now look at what we like, and what we preferred could be different for both alexandrite and tanzanite

The good: The rarity of alexandrite and its ability to change color under different lighting makes the alexandrite stone one of a kind on this planet. That’s impressive all by itself.

The not so good: The most significant “flaw” of alexandrite stones is the price. It appears to be a stone only reserved for the very wealth

The good: Tanzanite gemstones are popular on the market because of their affordability. What makes them appealing is that the stone is only mined in one place on the planet, and its color is naturally occurring.

The not-so-good: Mislabeling of jewelry is, unfortunately, something that happens. You need a keen eye to know if something is real tanzanite or not.

Knowing what alexandrite and tanzanite stones give you an appreciation of what they are and knowing what to look for to get what’s best for you.

For more posts like this, please visit this page or this page.